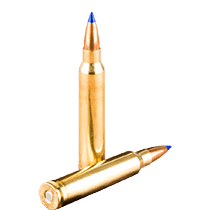 Live Inventory
The .300 Winchester Magnum has been a leading choice in the large-game hunting community since its introduction in the 1960s. Not only is it a tremendously powerful cartridge, but the .300 Win Mag is also accurate enough for 1,000-yard shooting competitions. Learn More
per page

The .300 Winchester Magnum descended from the legendary .375 H&H cartridge, which after many successful hunts in Africa, developed a reputation for being capable of taking every game animal on the entire continent. Following in the footsteps of its predecessor, the .300 Win Mag has a reputation of being able to take any game animal in North America. When you compare .300 Win Mag vs .30-06, in most cases, the .300 Win Mag enjoys a velocity advantage of nearly 300 feet per second over the .30-06, a cartridge that lives up to its heritage and name.

The popularity of the .300 Win Mag surged again in the early years of the new millennium, since the U.S. Army started converting its sniper rifles from .308 Winchester to the .300 WM cartridge – which is able to engage targets of human size at ranges as great as 1,200 meters. This distance is 50-percent farther compared to the reach of the .308 Winchester, a very effective sniper rifle cartridge.

Competitive shooters also have warmed up to the 300 Win Mag, as they prefer the flatter trajectory of 300 Win Mag compared to 308. Federal 300 Win Mag Gold Medal Match ammo is some of the most accurate ammo on the market and will often be found on the firing line at PALMA and F-Class matches across the country.