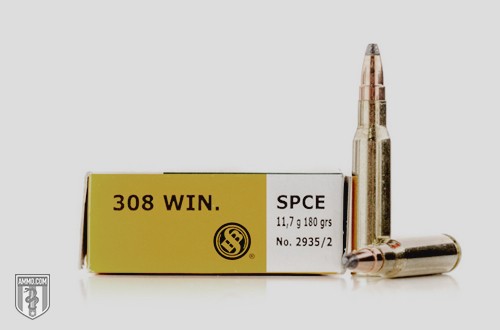 The soft point cutting edge bullet (SPCE) is essentially a modified semi-jacketed bullet that’s been designed to expand in a very controlled fashion. Unlike a standard soft-point or hollow point where the core is often bonded with the casing, this bullet doesn’t lock the lead core in completely. Some call it “water bottle” ammo, because the point of the bullet is vaguely designed similar to a pet hamster’s water bottle. The core isn’t bonded to the casing, allowing a different style of expansion and penetration.

When an SPCE hits a target, the front portion of the bullet will mushroom, while keeping a nice section of shank intact. This pretty much guarantees a very controlled expansion every time. Sellier & Bellot is probably the most popular manufacturer of this bullet type right now, and they use it in a variety of their ammunition lines.

This bullet is great for most any medium-sized game. The excellent penetration afforded by the unique design can be a little much for thin-skinned animals such as deer. However, it performs admirably on thicker-skinned and slightly heavier animals, such as mountain goats and feral hogs.

Shooters with a huge range of experience with this type of ammo consider it a middle-ground bullet that performs nicely, but it won't give you the same results as an ultra-premium ammo. The bullet may not perform like a Hornady or Nosler bullet, but if you are hunting, it is immeasurably better than a full metal jacket bullet.

Some people love these for target shooting, as the entry hole is often a perfect, easy-to-see circle. And it's a great choice for hunters looking for a bullet that delivers very uniform performance across the board. Naturally, you’ll want to take plenty of practice shots before hitting your local hunting area, but the performance has made this a popular bullet type.