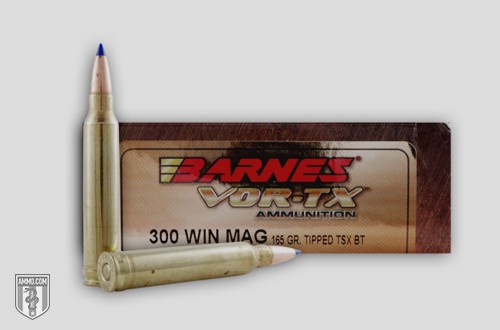 The Tipped Triple-Shock X is an updated variation on Barnes Bullets' popular Triple-Shock X (TSX) that debuted in 2003, as a premium hunting bullet. TSX was – and still is – extremely popular with a relatively large following, but this tipped version aims to improve upon it with the polymer tip and redesigned nose cavity.

These features offer better rapid expansion and a mushroom effect that splits uniformly into four “petals.” These petals spread away from the center of the bullet on impact, creating a massive wound channel and extreme damage if the shot is in or near any vitals on the target. This effect is similar to a hollow point, but more predictable and consistent due to the features explained below.

While this particular bullet is used almost exclusively in big-game hunting ammo, you can also use it for smaller critters – as it has the accuracy to devastate most critters at extreme range, which is good for skittish varmints that won’t let you get anywhere near them.

This bullet shines in the wolf, boar, deer, goat, moose and bear area – and with calibers like .300 Win Mag and .30-06, you will have plenty of knockdown power. If you live in an area with limited tags each season, you want every shot to count and this bullet in most calibers is going to get the job done beautifully.

Whether you’re a reloader, buying various ammo from Barnes directly, or know someone who uses these bullets in their own stock, this is going to be a favorite hunting ammo for you and people you hunt with. There’s quite a following for the TSX and most have jumped over to the tipped style, simply because it outperforms the standard in many ways.