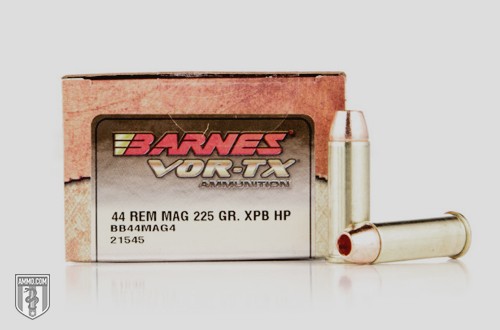 The XPB series is a line of ammo created and distributed by Barnes Bullets (well known among reloaders), an ammunition manufacturer based in Utah. These bullets are only used in large caliber handgun ammo, from the .357 up to .500 S&W and everything in between. The Barnes XPB features various nose shapes, but one thing is standard across every bullet type – the hollow point. This allows for maximum expansion on impact and phenomenal stopping power, no matter what you’re shooting. This particular style of ammunition is great for home defense, and is also fairly popular among handgun hunters who go after game like hogs and other handgun-friendly targets.

As with any hollow point, the XPB line is primarily for self-defense and home-defense use. When your life is on the line, that first shot really needs to count and you can’t go wrong with the XPB. The expansion is nice and the calibers covered are second to none if you love large handguns. Some shooters have found this bullet to be a great choice for hog hunting, as the reliable expansion and weight retention of the copper bullet provide excellent results when hunting this tough-skinned game.

You will need to make sure hollow point bullets are allowed wherever you plan to shoot, as lead could be banned.