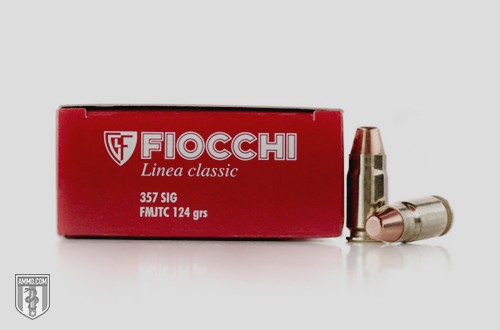 A full metal jacket truncated cone (FMJ-TC) is a bullet with a cone-shaped nose and a flat-tipped end, due to the nose being cut off. This type of bullet lies between the standard FMJ and the FMJ-FN, and is mostly used for target shooting and competitive matches. Great for scoring, FMJ-TC bullets leave a nice round hole in paper, making disputed scores less likely. The full metal jacket truncated cone can either be partially or fully surrounded by a harder metal, such as copper or a composite.

Some target and competitive shooters find they get a bit more accuracy with truncated cone bullets compared to flat tip at longer ranges, but this can depend on the gun and the skill of the shooter. The design of the truncated cone helps ensure reliable feeding in semi-auto pistols when compared to other designs such as the semi-wadcutter hollow point. Finally, the fully jacketed bullet can help to reduce the amount of lead exposure for the shooter and those in the area.

As with any FMJ, there’s certain places you won’t be able to shoot, even if they're designed for hunting. And while they have less penetration than boat tails or standard bullets, they can still go through a target and negatively impact whatever is behind it. Many hunting areas have a zero-tolerance policy for FMJ bullets of any type, so make sure you check before you hunt and bring a couple of ammo types just in case. The bullet itself is not the best choice for home and personal defense, which is due to the increased risk of over-penetration since the bullet is not designed to expand on impact.

More aerodynamic and accurate than a flat tip, but not quite like a boat tail, this type of ammo is a popular choice. The lack of exposed lead can be a perk with some brands that fully cover it (many ranges don’t mind exposed lead at the rear of the bullet).