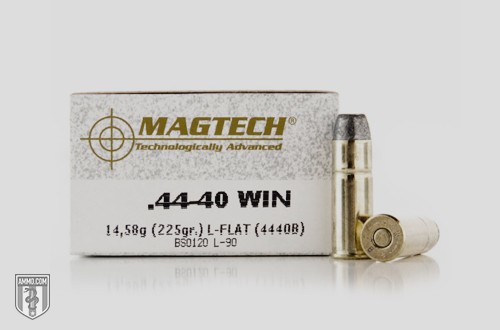 The popularity of the lead flat nose is hard to beat if you’re looking for a great match shooting round or a general target shooting bullet type. The flat nose makes it easier to see exactly where your bullet penetrated a paper target, which makes for much easier scoring, as the hole is cleaner with less radial tearing. Flat-nosed ammunition tends to have a lighter load of powder, so they don’t often give you the same velocity as their lead round nose bullet cousins.

While most often used for target shooting, this type of ammunition can be created for various special uses as well. And some people use it in their home defense revolvers due to greater expansion than round nose bullets, which gives it a little extra stopping power.

These bullets are easily identified by the flat nose, but they can come in numerous styles. Non-jacketed, flat nose bullets will deform and expand on impact, while semi-jacketed versions will give more penetration with some of the expansion lost. A big advantage for lead flat nose bullets is the variety available from various manufacturers. Each one has different ammo lines in this type for different uses, though many tend to be for target shooting use.

The most recognizable advantage is how the holes show up on the targets you’re shooting. Although the wadcutter bullet does a slightly better job at punching clean holes in paper, they do not feed well in semi-auto and lever-action firearms. Semi-flats are a decent in-between round and some matches will allow these.

Also, the original intent of the flat nose design was to be used in firearms with tubular magazines, like the Winchester Model 94 and Marlin 336C. The flat nose allowed the bullet tip to rest on the primer of the cartridge, with a much smaller chance of detonation than with a pointed tip bullet. One popular example is the .44-40.

The predominant disadvantage of this type of bullet is its rather limited use. Sure, some are specially made for home defense or only certain types of guns, but it's usually a target shooting round. Some hunters like them for small critters like raccoons and hares, but that's certainly not a popular use. And due to the exposed lead, it’s probably more common to find a semi-jacketed soft point bullet, so there’s a chance these won’t be allowed at indoor ranges or in certain areas.

The lead flat nose design does not make the bullet less aerodynamic in the grand scheme of ballistics, even though common sense would suggest the flat nose would be less efficient. The velocity of the bullet is high enough that accuracy loss is very minimal for normal use. If you’re trying to hit a rabbit across a football field, there are probably better bullet choices. But for most shooters, aerodynamics won’t be an issue here.

If you’re ready for some target practice or if a shooting match is coming up, these bullets are ideal. Just remember that it will really pay off to try out a few different brands, as well as jacket styles, to see what works the best for you.