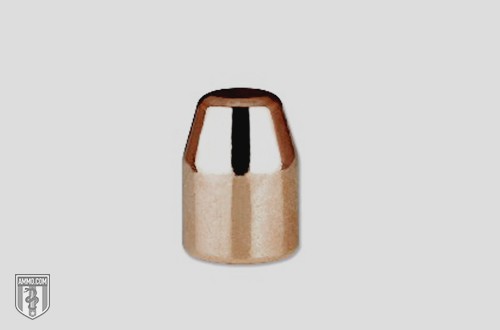 The truncated cone solid bullet (TCSB) can easily be identified because it looks like a solid cone of metal at the tip, with a flat nose at the end of the cone shape.

These bullets are prolific in smaller caliber, especially .22 LR, and see a lot of use at ranges or for backyard plinking and varmint control. The solid versions of the TC bullet are just as the name implies – there’s no hollow point or cavities within. It’s typically going to be available in solid lead, though there are some manufacturers out there that make a TCSB with copper. The jacket can vary between full metal jacket and semi-jacketed.

This particular truncated cone bullet sees a lot of action on the range and in backyards. It’s almost always going to be found for handguns, but not so much for rifles. The penetration combined with the initial impact makes it a relatively popular alternative in areas where hollow points aren’t allowed, as this bullet will cause quite a bit of damage and can punch through thicker hides. It’s not going to expand and there’s a possibility of over-penetration, but you can pick and choose from different styles to suit your exact need. Reloaders can also tailor rounds for home defense or concealed carry.

Many shooters seem to agree that the TCSB performs better than your standard lead round nose, but does not have the stopping power of a hollow point. This makes it a good choice if hollow points are banned where you live.