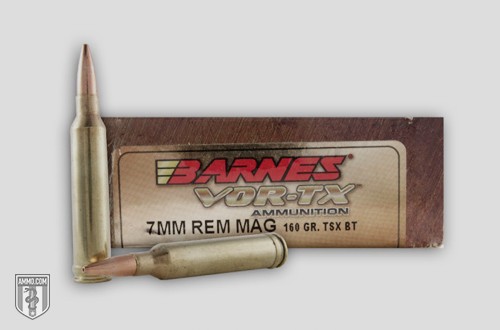 The Triple-Shock X is Barnes Bullets' premium hunting rifle ammunition. Commonly referred to as Barnes X bullets, this line of ammo comes in most rifle calibers, and the bullet is quite unique in that it uses a fairly thin diameter hollow section in the tip compared to similar styles. The thin section works extremely well to create a uniform expansion effect when it impacts a target.

Another thing that makes this and related Barnes ammo lines unique, is they don’t have a bullet core. You’re firing solid copper with the TSX, and it works better than you’d imagine, especially if you’ve used cored bullets or solid lead for years. This bullet type came out in 2004, and has been popular among hunters, rifle shooters and reloaders ever since.

This is a great rifle ammunition developed for hunting. The sheer number of calibers offered is impressive, ranging from .224 caliber to the .577 Nitro. If it can be hunted, Barnes makes a Triple-Shock bullet for the job.

This wouldn’t be a very good home defense ammunition, however, unless you had significant distance between you and would-be attackers. These bullets were designed to travel long distances with relatively flat trajectories and to devastate their target on impact.

The Triple-Shock X is one of the more premium ammo lines by this particular manufacturer, and if you’re looking for a lead-free alternative hunting ammunition, this is a very popular choice with great reviews. The one bullet style that rivals this from Barnes is the Tipped Triple-Shock X.