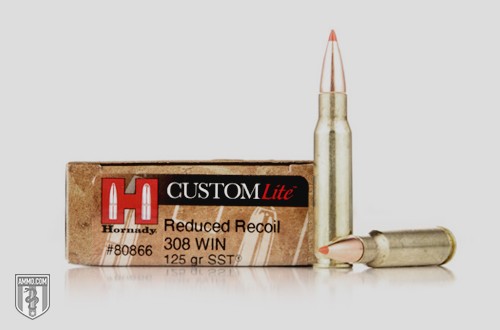 The Super Shock Tip (SST) is a bullet style created by Hornady and is used in a variety of their rifle rounds. All of the most common centerfire calibers, from .243 to .308, are offered with the SST bullet.

This particular bullet is quite popular among reloaders because it’s high-quality polymer tipped and has an expanding bullet that is extremely versatile. It can be used for everything – from backyard shooting to varmint control to big-game hunting – and the boat-tail design makes it relatively easy for reloaders to work with.

Deer hunters have sizable online communities dedicated to using these bullets and the Hornady lines that incorporate them. This is because they are high velocity, ultra-flat trajectory, rapid expansion bullets that can take down large game like deer, moose and antelope quickly – as long as they are placed properly.

Without a doubt, any ammunition that features the SST from Hornady is a pure, high-quality hunting round. Due to the high velocity and this being rifle ammo, it’s not a good choice for home defense – unless you’re defending an extremely large area.

Overall, the Super Shock Tip is a great choice for hunters, and it’s a pretty satisfying backyard shoot. It has that nice blend of penetration versus expansion, combined with an intended long range and high accuracy, making it a better-than-average bullet type.