Looking for Power Point ammo? See what we have in-stock: PP Ammo Search » 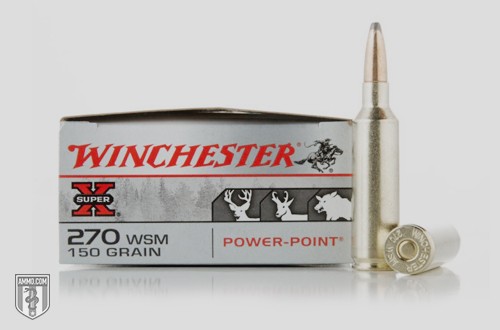 Winchester Power Points are one of the brand’s premium hunting products. This bullet features a soft lead tip and a notched jacket to create a very uniform level of expansion, while maintaining a very high degree of accuracy. This type of bullet is often referred to as a “standard” hunting bullet, because they use tried-and-true technology without any fancy (and expensive) features that some shooters may deem unnecessary.

Some similar ammo lines are the Sierra GameKing, Hornady Interlock, and Federal Soft Point. These all look and perform similarly and have been used for hunting successfully for decades. There is a huge following of hunters who simply prefer these older-style bullets because they get the job done nicely.

As with any older-style bullet type, you have the advantage of years of use, testing, and improvements to how Winchester makes these bullets. Not long ago, they changed the profile slightly to improve accuracy and expansion, and while subtle, it was a very noticeable improvement on the older style they’d manufactured for decades. People who shoot the PP know exactly what to expect with each shot.

The only true disadvantages to this ammo line are very slight – with the most noticeable being that you can probably find a better bullet for specific uses if you really want it. Technology has improved so much over the past 20 years, ammo like the Fusion and Ballistic Tip have gained popularity, and old-style bullets like the Power Point can sometimes be left behind as people try out this new technology.

The Winchester Power Point is a great bullet that has been consistent for years. It can take down game animals of all sizes quickly and easily, and many hunters feel there’s no need to try anything else. On the other hand, some people keep this as their tried-and-true hunting ammo, but simply enjoy dabbling with different brands and ammo lines for fun. The choice is yours, but this is a quality ammo that does its job nicely.