Hollow Point vs FMJ  - Learn their Differences and Best Uses 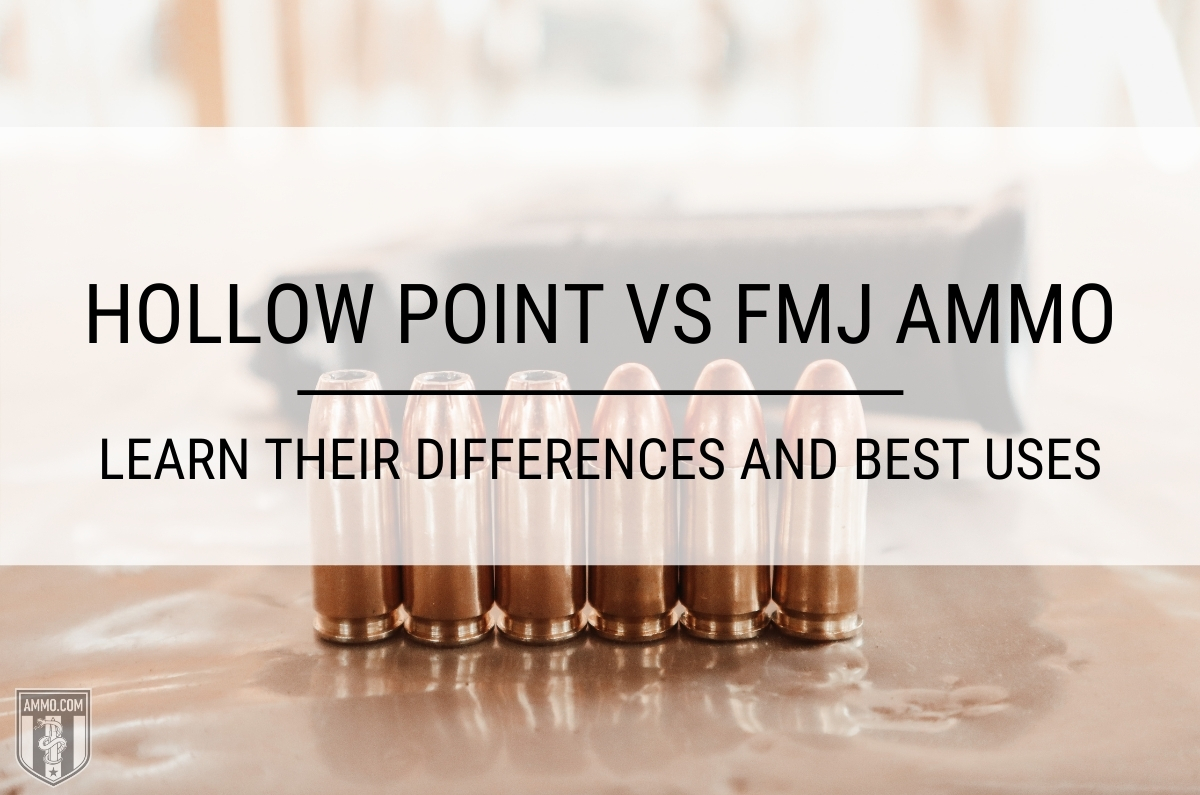 Full Metal Jacket (FMJ) and Hollow Point (HP) are the designations for the two most common types of ammunition fired from metallic cartridge firearms. Full metal jacket ammo is typically used for target shooting and plinking while hollow point ammo is considered the gold standard for self-defense.

There’s no reason why you can’t use FMJ rounds for self-defense or home defense, but there are many compelling reasons why hollow point ammo should always be loaded into your everyday carry handgun.

Let’s load our magazines and take a shot at understanding why!

What Is Hollow Point

A Hollow Point (HP) or Jacketed Hollow Point (JHP) is an expanding bullet that is designed for self-defense and to stop overpenetration. For the purpose of this article, we will use the terms interchangeably.

Hollow point rounds have a soft lead core and are surrounded by a metallic jacket (typically copper). There is a divot or “hollow” at the tip of the bullet that will expand when it encounters soft tissue. 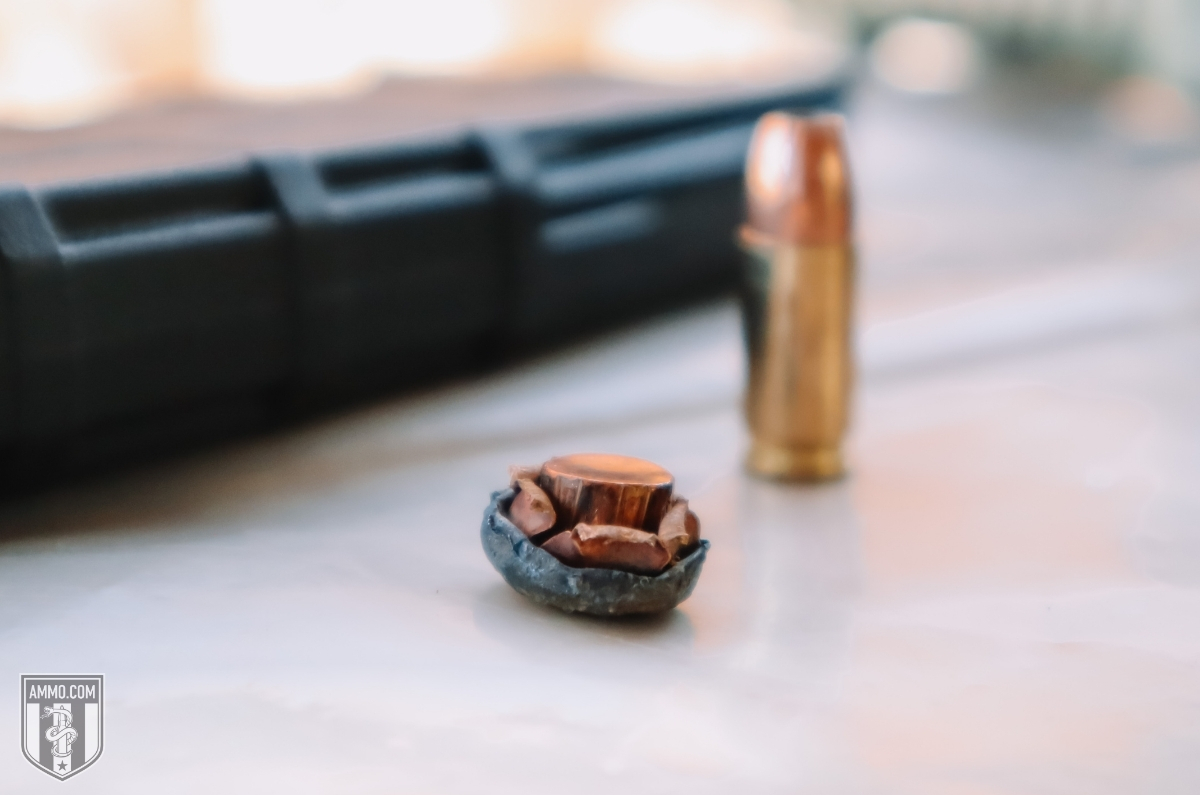 The expansion of the hollow point allows more kinetic energy to be transferred to the target and slows the bullet down tremendously. These rounds are touted as self-defense rounds because they are designed to (ideally) not leave the bad guy.

As the bullet expands, it creates a larger wound channel that increases the odds of the bullet contacting vital organs. This is the main reason that hollow point ammo is considered the best choice for defense ammo, as it will stop a threat with fewer rounds and lowers the potential for overpenetration.

What is Full Metal Jacket

A Full Metal Jacket (FMJ) bullet is exactly like it sounds. It is a bullet that has a lead core that is encapsulated by a metallic outer coating or jacket, typically made from copper.

This round has several benefits over shooting bare lead bullets through your firearms. First off, they are cleaner to shoot and more consistent in terms of accuracy than bare lead bullets. The full metal jacket protects your barrel from lead deposits (referred to as ‘leading’) forming in the grooves of your rifling.

This is because there is no bare lead contacting your barrel. This also makes cleaning your barrel after shooting much simpler as removing leading can be a royal pain in the buttstock.

Therefore, shooting FMJ through your firearms will increase your barrel life as there will be less wear and tear on the rifling.

Accuracy down range is also better for FMJ rounds since they are more uniform and consistent in their production.

FMJ rounds are normally used for target practice and plinking because they are cheaper than JHP. Furthermore, they are more streamlined and designed to continue through their target with minimal deflection or deformation of the bullet.

A Disclaimer About Self-Defense

The major difference between FMJ and JHP is their downrange ballistic performance in a self-defense situation.

Understand that there is no such thing as a “magic bullet” like you see in the movies or on TV that drops an assailant with a single shot, catapulting them across the room like a ragdoll.

Shot placement is the key to surviving any hostile encounter. A JHP bullet to the hand is considerably less lethal than an FMJ bullet striking center of mass. Although there is anecdotal evidence of bad guys walking away from FMJ bullet wounds, those examples are exceptions to the rule. All bullets can be lethal with the proper shot placement. That being said, jacketed hollow point is the ideal choice for self-defense.

Let’s take a look at why.

FMJ vs Hollow Point – A Case of Self-Defense

On April 11, 1986, the FBI was involved in a shootout with two serial bank robbers and murderers in Dade County, Florida. Although the FBI agents outnumbered the criminals 8 to 2, the FBI Special Agents were severely outgunned, and 2 agents lost their life after an extended firefight. This incident was named the 1986 Miami Shootout and it was determined that the FBI’s sidearms were ineffective at stopping the criminals as they endured multiple hits and kept fighting. The 1986 Miami Shootout is perhaps the most thoroughly analyzed law enforcement shooting in US history and as a result, the FBI Ammunition Protocol was adopted by the FBI and multiple police forces across the United States.

So, what is the FBI Ammunition Protocol exactly? 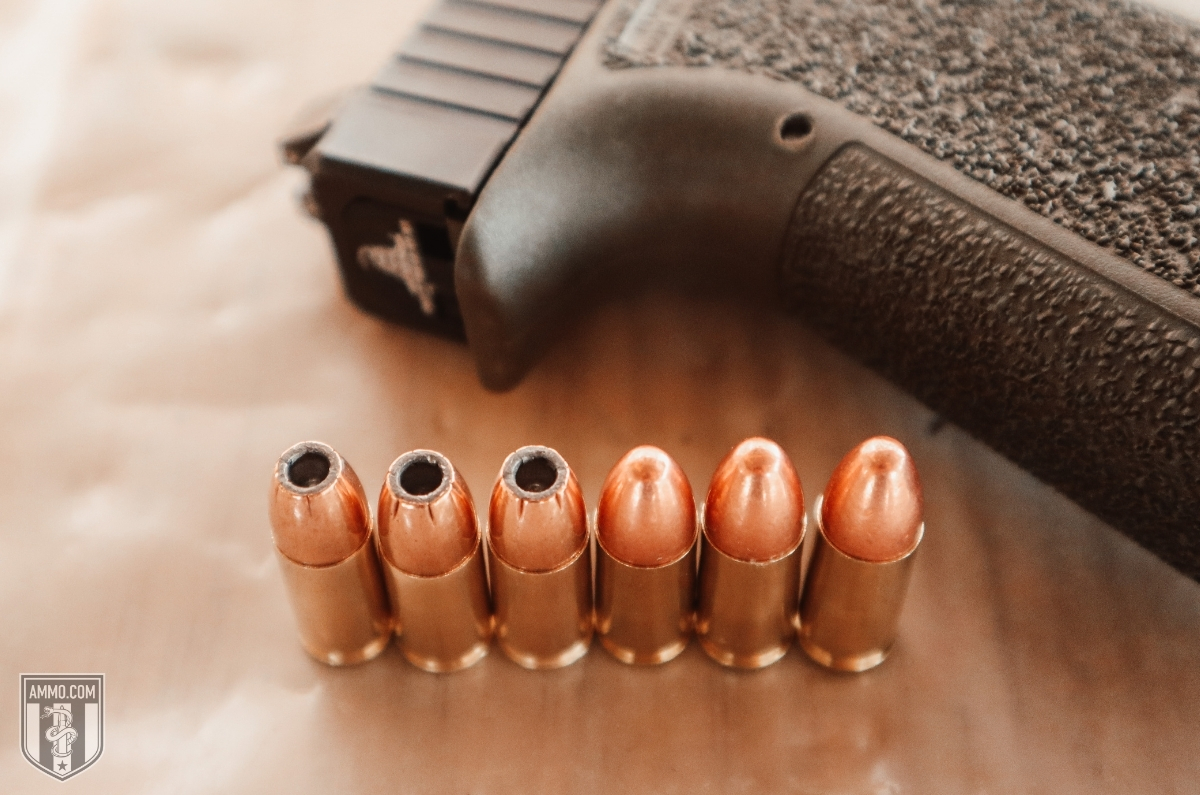 In short, it’s a really complicated scoring system to evaluate handgun ammunition and its terminal performance passing through multiple barriers. The scoring system is rather complex, so let me simplify it for you: A bullet that penetrates no less than 12 inches and no more than 16 inches into bare ballistic gelatin (a synthetic substitute for soft tissues) is good for self-defense. This is where hollow point takes the edge over full metal jacket.

As we discussed earlier, the FMJ round is designed to not significantly change its shape or trajectory when it encounters an obstacle… like a bad guy. Therefore, it will easily pass through a target and might hit something important behind it, like an innocent bystander. As such, FMJ is not recommended for self-defense except in extremely anemic rounds where a hollow point would be ineffective, such as a 380 ACP.

If you should ever find yourself in a self-defense or home defense situation, the last thing you want is for the bullets you fire to travel beyond their intended target and hit someone/something you didn’t intend to shoot. Homes nowadays are made from cheap material, and sheetrock/drywall is not an effective barrier against centerfire ammunition. As such, we want all our bullets to come to rest in their intended target: the bad guy.

My first official firearms instructor told me something I’ll never forget, “Assume every bullet you fire in a self-defense situation has a lawyer attached to it!”

With this being the case, the last thing we ever want is for a bullet that we fire to hit someone or something we didn’t intend to because we will be liable for the damage we cause. As JHP is designed to expand and transfer its energy into the target, this makes it the ideal ammo of choice for any self-defense situation because it creates a larger wound channel and does not experience overpenetration.

What Hollow Point Ammo is Best?

Any of your popular ammo manufacturers will produce high-quality hollow point ammunition. You should test HP rounds in all of your carry guns to see which ones work the best for you.

Why Bother With FMJ Ammo?

If jacketed hollow point bullets are so amazing, this begs the question of why we would even consider using FMJ rounds in the first place?

Well, the simple answer is cost.

FMJ is considerably cheaper when compared to hollow point. This allows you to practice more for less money and become more proficient with your self-defense handgun. Remember that whole “shot placement” thing we talked about in the disclaimer section? If you can’t hit the broad side of a barn, then no amount of hollow point ammo can save you in a self-defense situation. 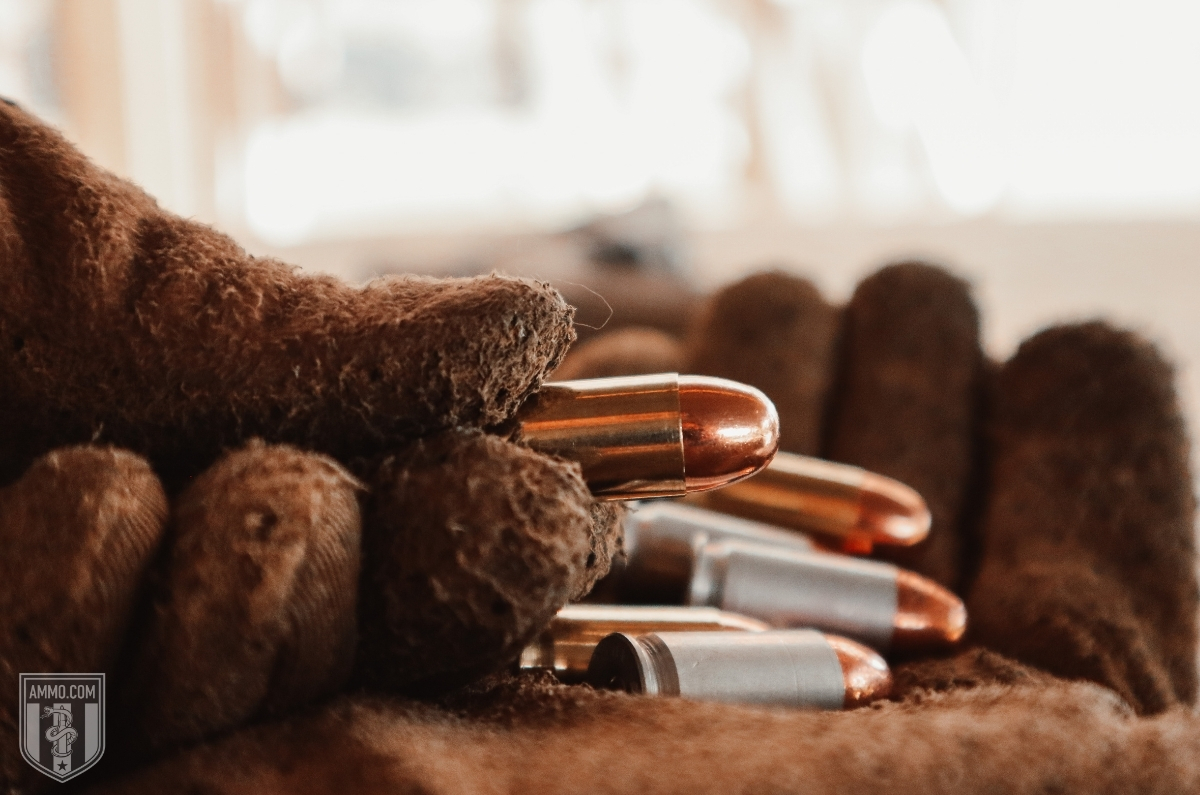 You need to be accurate and consistent with your concealed carry handgun and the only way to do that is to practice. Shooting full metal jacket allows you to do this at a much lower price point than shooting JHP through your everyday carry. Another benefit is its downrange performance. Match grade full metal jacket ammo is considered the gold standard when it comes to accuracy.

You can get frightfully accurate groupings with extreme precision from premium ammo manufacturers like: 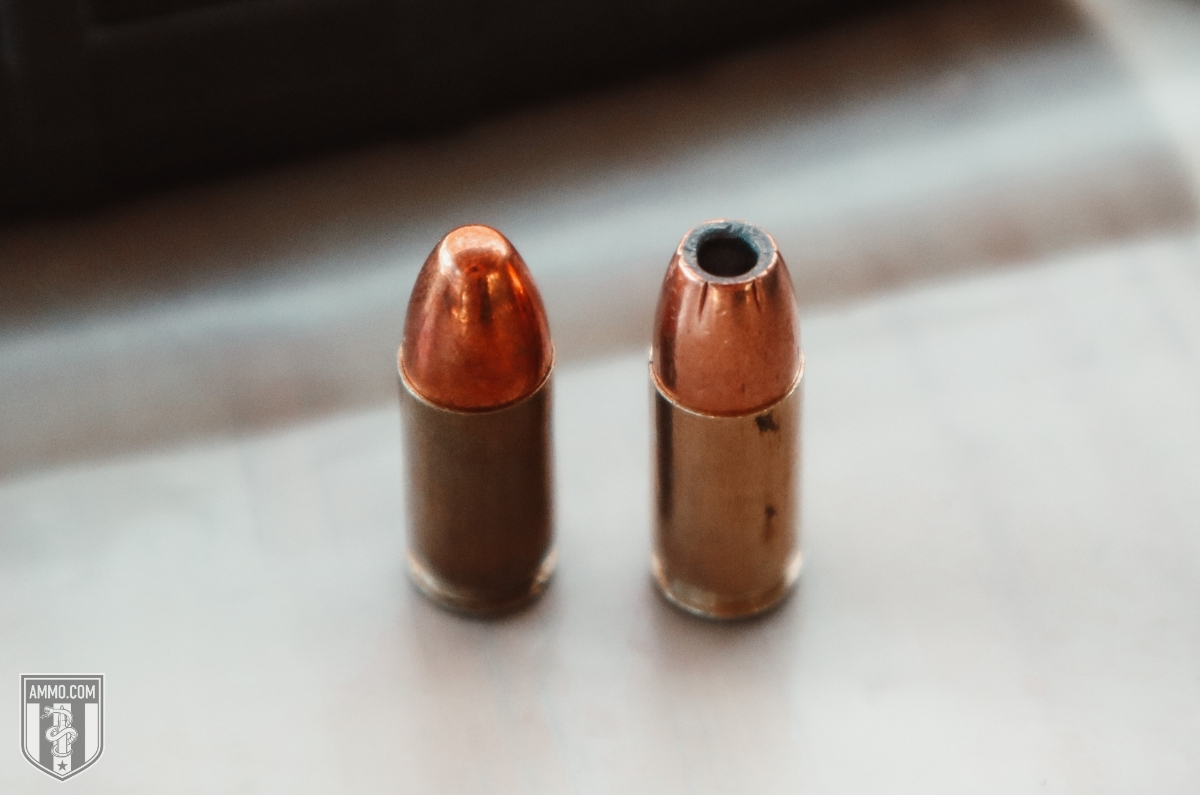 When it comes to selecting the types of ammunition to feed your firearms, it is pretty simple when you are considering hollow point vs FMJ. Load your carry guns with quality hollow point ammo like Federal Hyrda-Shoks or Speer Gold Dots and pack your range bag full of full metal jacket ammo for practice.

Jacketed hollow point ammunition is the ideal defense ammo for concealed carry as it protects against overpenetration and creates a larger wound channel as the bullet expands upon contact with soft tissue.

Full metal jacket ammo is the better option when going to the range to be as accurate and consistent with your firearms as you can shoot more of it at a lower cost than what you would shooting JHP ammo.

No matter what handgun or rifle you want to shoot, from the .22LR you learned how to shoot with, to your grandpa’s .357 Magnum, all the way to that Barrett 50 BMG you’re dreaming about…The most important thing to do is practice and be proficient with your firearms.

So, grab yourself a box of full metal jackets and get yourself out to the range and make sure your concealed carry is loaded with some hollow points!