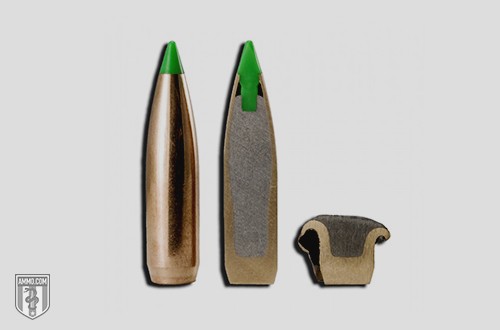 The Ballistic Tip is Nosler’s trademark name for their line of hunting ammunition – which is a hollow point with the front cavity filled with a hard plastic polymer, creating an extremely aerodynamic bullet shape. When impacting a target, the bullet tip is driven toward the rear of the bullet, resulting in a very uniform expansion or fragmentation or both, depending on the exact line of ammo in question. The Ballistic Tip line is almost entirely made for hunting rifles, though there are a few exceptions out there for pistols and muzzleloaders.

Any hunter familiar with this line of ammo will tell you that these bullets are extremely predictable. And when hunting thin-skinned game like whitetails or pronghorns, they will go down almost every single time. The expansion of these bullets when they strike a vital area is top of the line, and the accuracy is near perfect in the hands of a seasoned hunter familiar with this ammo type. The color-coded tips are also a very nice touch.

For meduim to large game, Nosler also offers the Ballistic Tip in 7mm-08 and other larger bore bullets including .458 caliber.

This line was made for domestic game that you’d find in the U.S., Canada and other parts of the world with similar climates and average critters – it isn’t an ammo you’re going to want to use on Cape Buffalo. For that, you should use the AccuBond or find a different brand that specializes in that type of game, as they are physically very different from your average whitetail.

With lines for hunting, varmints and the lead-free bullets, it's clear why the Ballistic Tip ammo from Nosler is popular with shooters of all types. As technology improves even more, this is an ammo line that could potentially secure its place in history among hunters of all types. As with all hunting, check local regulations to make sure these are allowed where you plan to hunt – a few places in North Carolina and some other states have temporarily banned polymer tip ammo.