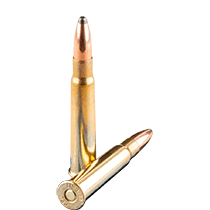 Live Inventory
Originally used as a military cartridge in weapons ranging from bolt action rifles to aircraft machine guns, the .303 British is highly regarded as a hunting round – particularly well suited for medium-sized game at 300 yards or less. Learn More

.303 British ammunition originated as a black powder cartridge, and was first employed by the British military in 1888. The Lee-Metford rifle, later known as the Lee-Enfield rifle, was the first rifle chambered for the .303 British, which eventually advanced from being a black powder cartridge to using cordite, a smokeless powder. In over 70 years of service to the Commonwealth, the .303 British saw action in the Boer War, the Turkish War of Independence and both world wars.

The Performance Specs of the 303 British

Bullets for this cartridge weigh between 150 grains and 180 grains, muzzle velocity ranges from nearly 2,500 to more than 2,700 feet per second, and muzzle energy varies between 2,400 and 2,600 foot pounds. Several manufacturers – including Federal, Remington and Winchester – still produce .303 British for civilians, which come as soft point, full metal jacket or hollow point. For the military, .303 British cartridges have been topped with FMJ bullets, armor-piercing and incendiary rounds, tracer bullets, and a special marking round that made a puff of smoke at the point of impact.

This rather heavy bullet moving at high speed makes it a great round for hunting nearly all North American game animals, including elk and moose. Military surplus rifles are available chambered in .303 British, and they are used for hunting in Africa and Australia for a diverse array of game. While the .303 British cartridge might not be the most popular, it remains a solid performer with good availability in nearly any corner of the globe.

While the 303 British is a popular surplus round, it’s not without its drawbacks. This is because the surplus rounds available frequently contain corrosive materials in the primer. While this doesn’t mean that they can’t be used safely, it does require the weapon to be cleaned thoroughly every time it’s used to remove all of the corrosive salts that build up. If you purchase and fire any .303 British ammo, the best thing you can do is to assume that it uses these corrosive primers and clean your weapon after every use.

What’s more, .303 British ammunition refers to a wide array of weapons with slightly different specs. This is because the British military made several different “marks” of the weapon. Depending on what you’re using the weapon for, the mark might not be the right ammunition and can potentially damage your firearm. For example, those stamped with “VIII” (the Roman numeral for “8”) are Mark 8 and specifically for the Vickers machine gun. They should not be used in more traditional rifles because they can cause significant barrel damage.

The History of the 303 British

However, the history of the 303 British round cannot be separated from the most iconic British rifle it was ever loaded into – the British Lee Enfield .303 Rifle, affectionately known by a generation of British troops as “Smelly.” Introduced in 1903, it became one of the longest-serving standard-issue rifles in military history, seeing service in both world wars and a nearly countless number of conflicts the British Empire and the U.K. found itself in.

Indeed, gun historian Ron Palmer stated that “it played a major role in shaping our modern world.” This is no exaggeration. The British Empire used these weapons in their campaigns in Cyprus, Iraq, Nigeria, Palestine, Sudan, Syria, Tibet and West Africa. On the other side of the coin, it was used in the independence struggles of virtually every nation resisting the British. It remained the primary caliber issued to British infantry troops until 1958.

This is ironic considering the inauspicious start the weapon got off to. While the British won the Second Boer War, they did so at great cost in part because the Boer Mausers were far better weapons, able to outshoot their British counterparts by a few hundred yards. 88,000 Boers held off 450,000 British troops for three years, costing the Empire 22,000 men and a whopping 222 million pounds of sterling. They went back to the drawing board and came up with Smelly, Mark III.

This weapon didn’t debut until the First World War and the British troops were in love. They were often able to get off as many as 30 rounds per minute at great accuracy. Many times, Kaiser Bill’s troops thought they were being fired at by machine guns. Over seven trillion cartridges were cranked out by British factories during the Great War.

The mark of the British Empire can still be seen in the places where the 303 British round remains in regular service use. For example, the Indian Home Guard still uses the round. Nearly every faction fighting over Afghanistan is going to have a lot of men using this durable and long-lasting arm.

A very similar round to the British 303 is the Japanese 7.7mm. Japan manufactured a number of weapons that were direct copies of British firearms, mostly showing up in the aircraft of the Japanese Navy. The rounds used inside these weapons are direct copies of the comparable British round – the .303, which match the 303 because they are rimmed rounds. Other 7.7mm rounds manufactured in Japan are either rimless or semi-rimmed, distinguishing them from the rimmed 7.7mm.

The 303 British on the International Stage

Despite the fact that it is an imperfect round, the 303 British has seen a lot of action among the civilian population, particularly in Commonwealth countries, but also in the United States and South Africa. Canadians use it to hunt just about anything that walks, crawls or flies, except for the great bears. In the Australian military, it was common to rebarrel weapons to accommodate the 303 British cartridges obtained as surplus, most commonly as 303/25 and 303/22. But the 303 retains a devoted audience as a game cartridge even to this day.

In 2010, there was a petition on Change.org to get Lithgow Arms to chamber the LA102 centerfire rifle for the 303 British. This petition was most popular in Australia.

In South Africa, the story of the 303 British cartridge is very different and a lot more interesting. British Lee–Enfield rifles were captured by the British during the Boer Wars. The intrepid Boers adapted them for hunting rounds that they then used to drop anything from small impalas to giant kudu and eland.

In the United States, the round finds its most widespread use for whitetail deer and black bears. Moose and deer are the preferred game for this cartridge north of the border in Canada. The reason sportsmen like it for such heavy game is the fast twist rate driving deep penetration and the ability to push long and heavy bullets.

Canadian Rangers use it as a survival round but also as a form of defense against polar bears. However, in 2015, they began evaluating replacing the round with .308 Winchester, due to the fact that the parts for their weapons were becoming increasingly scarce.

The British 303 is a rare bird, indeed: A rimmed and bottlenecked centerfire round that people still use today. The others in this category include .30-30 Winchester, .22 Hornet and 7.62x54mmR. For the most part, these types of cartridges started falling out of use in the 1880s and 1890s. By the end of the First World War, they were all but gone from the world stage. Still, these rounds have a fierce following among a few devoted fans who keep the rounds in circulation and production. In the case of the .303 British, it is still manufactured by a number of major ammunition manufacturers including Wolf, Federal, Winchester, Remington, Sellier & Bellot and Prvi Partizan. The round can be obtained in boattail and flat-based designs, as well as hollow point, soft point and full metal jacket rounds.

Reloaders are fans of the 303 British and there is no shortage of equipment to work on your reloading with this round. Redding, Hornady, Lee, Lyman, Foster and RCBS all make equipment for reloaders who want to work with the 303. Reloaders are often enamored with the challenge of taking a military round with a looser barrel and adjusting it to fit their own purposes.

The 303 has also been used as a parent case for the .303 Epps. Canadian sporting goods entrepreneur Ellwood Epps started making his own wildcatted and improved version of the 300 British round. He improved the ballistic performance of the cartridge by more than doubling the shoulder angle (16 degrees to 35 degrees) and significantly reducing the taper from .062 inch to .009 inch. This resulted in a whopping nine-percent increase in the overall internal volume of the round.