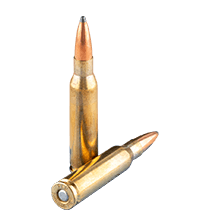 Live Inventory
Noted for having a wide range of bullets available, the 7mm-08 Remington has been proven effective on moose and smaller game – all the way to varmints. Its accuracy also makes it a good choice for competitive shooting. Learn More

In 1980, Remington Arms Company developed the 7mm-08 Remington cartridge as a round for multiple applications, from small-game hunting to competitive long-range shooting. Though the wildcat cartridge had been part of the hunting and shooting scene for years, Remington boosted the appeal of the cartridge by chambering it in their Model 700 and Model 788 rifles, and also their unique bolt action pistol, the XP-100.

Hunters have used the 7mm-08 to pursue many different kinds of game. It has been established as a respectable cartridge with a wide array of bullet weights and configurations available, for just about every need, for even the most demanding hunter. Several respected shooters of large game animals endorse the 7mm-08 as a good cartridge for hunting deer, elk and even moose.

The 7mm-08 Remington performs similar to a few well known cartridges – including the 7x57mm Mauser, .308 Winchester and even the venerable .30-06. Bullets commonly weigh between 120 grains and 165 grains, and are configured in every design shooters want. Muzzle velocity on the low end is about 2,500 feet per second, and at the high end is about 3,000 feet per second. The muzzle energy of the 7mm-08 is between 2,300 and 2,500 foot pounds. Downrange performance is impressive, with most bullets still carrying 1,400 foot pounds or more as far out as 300 yards.

This cartridge is great for all game in North America, except the largest and most dangerous, and is regularly used to take elk and feral hogs. It's efficient and performs well in crosswinds, not to mention that the recoil is manageable for most shooters.

The 7mm-08 is most often chambered in lever action and bolt action rifles, although it is also available in a few semi-automatic rifles, such as the Remington R-25. Federal, Hornady, Remington and Winchester are the better known companies that produce ammunition in 7mm-08. They top these cartridges with a large variety of bullets, from standard soft point to the most advanced hunting bullets that money can buy.

Sport shooters and hunters alike would be well served to have a 7mm-08 in their gun collection.