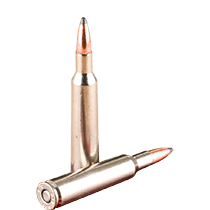 Live Inventory
Introduced in 1955, the 6mm Remington is an excellent varmint and predator cartridge. With muzzle velocities that can exceed 4,000 feet per second, this cartridge shoots flat and is extremely accurate. Heavier bullets make the 6mm Rem suitable for deer-sized game as well. Learn More

In 1955, the Remington Arms Company introduced the 6mm Remington. Fred Huntington designed the cartridge by necking down the case of a .257 Roberts to accept a 0.243" diameter bullet. When Huntington necked the .257 down to .243", he called it the ".243 Rockchucker" being that he didn't work for Remington. And he changed the shoulder angle, which Remington did not do when they commercialized the design." Nine years later, the cartridge was renamed the 6mm Remington, and the name has stayed the same since.

The 6mm was intended for varmint hunting, and many of its characteristics make it very effective for dispatching varmints of any size – including maintaining spot-on accuracy at ranges as far out as 400 yards, maintaining a velocity better than 1,000 feet per second with the 100 grain bullet (even as it sails past the 400-yard mark), and frequently making shots at 500 yards or more. Deer hunters have come to appreciate the 6mm Remington, as it performs very well on medium-sized game at distances beyond 300 yards.

With mild recoil and accuracy as good as any other cartridge available for sale today, the 6mm is a great choice for a beginning shooter or for hunters who want a deer and varmint rifle with lighter recoil. The similarity between the 6mm and .243 Winchester is unmistakable, yet the 6mm just edges past the .243 in performance.

The 6mm Remington is chambered in bolt action rifles manufactured by many companies, and is also available in single shot rifles. Performing well as a hunting cartridge, the 6mm saw only limited popularity with competitive shooters, and never really enjoyed the success in that arena that its cousin, the 6mm BR, did.

6mm Remington ammunition is uncommon, but is still available without requiring extreme effort. The most easily found 6mm ammo has a pointed soft point bullet that weighs between 55 grains and 105 grains. Muzzle velocity can exceed 4,000 feet per second, and the heaviest bullets can generate more than 2,000 foot pounds of muzzle energy. For shooters willing to search, specialty bullets including Nosler Partition and Hornady SST help squeeze from this cartridge the last possible drops of performance.

The 6mm Remington answers the “One Gun Only” question. It reaches to long ranges, and is available in a wide variety of ammunition. Due to this versatility, this cartridge is a jack of all trades.