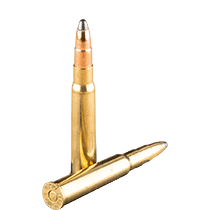 Live Inventory
The 8x57 JRS is a rimmed version of the .323-inch 8mm Mauser cartridge – designed to be used by hunters who wanted the power of the 8mm Mauser in their break-open hunting rifles. Learn More

The German Ordinance Bureau introduced an improved version of the 8mm Mauser cartridge, and added a rim to create the 8x57 JRS. The major change in the process of improving the 8mm Mauser was increasing the diameter of the bullet to 0.323 inches. The version without a rim served in various militaries around the world. And when the cartridge was finally retired from active service, the 8mm had more than a century of use as a military cartridge.

In terms of performance, the 8x57 JRS is frequently compared to the .30-06. The 196 grain bullet achieves muzzle velocities greater than 2,400 feet per second, and muzzle energies of nearly 2,700 foot pounds. The cartridge is therefore great for hunting medium-sized game at ranges inside 500 yards.

Several rifle companies today still manufacture double and bolt action rifles chambered for the 8x57 JRS. Ammunition is getting harder to find, but Sellier & Bellot and Norma are some of the manufacturers still making high-quality 8x57 JRS ammo. Essentially all cartridges produced in this caliber are topped with 196 grain bullets, so there is not any variety to speak of. This bullet weight is useful enough for many different applications, but when compared to .30-06 cartridges and the availability of a large variety of bullet weights and configurations, the .30-06 proves to be more versatile.

Used around the world by military and civilian shooters alike, the 8x57 JRS is a powerful and proven cartridge that would make a great addition to any shooter's collection. The cartridge has an interesting history, and is a very capable round as well.