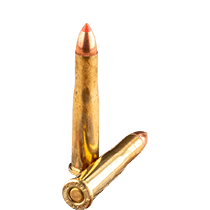 Live Inventory
Since its introduction, the .22 Hornet has been a popular cartridge for small game and varmint hunting. It was also once used as a survival rifle cartridge for military aircrew members. .22 Hornet ammo remains a go-to choice for its accuracy and performance on small- to medium-sized game. Learn More

First produced in 1930, the .22 Hornet was developed by the Springfield Armory and is to this day an excellent cartridge for hunting varmints and predators. It has even been used in the U.K. for hunting deer with great success. The cartridge has mild recoil and good accuracy, with relatively low noise levels – making this a great choice for hunting vermin in more populated areas.

The Power of the 22 Hornet

The .22 Hornet is a centerfire cartridge, available with bullets weighing from 35 to 55 grains. Bullets most commonly have soft points or are produced for specific varmints like the V-Max. Muzzle velocity ranges between 2,600 and 3,000 feet per second. Muzzle energies, as a result, vary between 700 and 850 foot pounds when fired from a rifle. The maximum effective range is 150 yards for larger vermin and predators, and as much as 200 yards for smaller varmints. Some hunters use this cartridge to shoot feral hogs, but shot placement must be precise to use the .22 Hornet for this application.

One of the big attractions of the 22 Hornet is the power – it’s a small round packing a big punch. It has a significant power advantage over the .17 HMR and the 22 WMR, and it’s also a centerfire cartridge, which makes it far easier to reload and to handload (a strong value proposition for the amateur handloader or reloading enthusiast). Until the introduction of the FN 5.7x28mm, this was the smallest commercially available 22 round on the market. It’s often said to sit between the .22 WMR and the .223 Remington in terms of power for varmint and predator rounds. Because of the velocity, energy and noise levels, it’s the perfect round for varmint and predator solutions while in more densely populated areas.

For what it’s worth, wildcatters love to wildcat the 22 Hornet into variations of their own. Prominent wildcatter Lysle Kilbourn came up with the .22 K-Hornet, a 22 Hornet with an extended case shoulder to allow for more propellant in the cartridge. Another is the 22 Ackley Improved Hornet, which comes from the mind of P.O. Ackley, one of the most famous wildcatters in the world. This is a 22 Hornet with significantly increased power that is not quite deer legal in many parts of the EU, but is completely deer legal in the United States.

The History of the 22 Hornet

The precursor to the 22 Hornet is a similar round now known as the 22 Harwood Hornet to avoid confusion with the modern round. These two rounds are not compatible with one another. The original Hornet round was a necked-down .25-20 single shot loaded with black powder. The 22 Hornet as we know it was a result of experimentation in the 1920s, putting black powder into .22 WCF at the famous Springfield Armory. In 1930, Winchester picked up a wildcatted round and started making ammunition for firearms that hadn’t yet been commercially manufactured. In 1932, the first commercially produced firearms for this cartridge rolled off the lines.

The .22 Hornet became relatively famous in World War II, where it was used in the M4 by the U.S. Army Air Corps, and later in the M6 for aircrew members. After the war, the Springfield Armory produced the M6 chambered for the .22 Hornet and .410 Bore in an over-under configuration.

1933 was a game changer for the round. It was in this year that the Winchester Model 54 rifle first came off the assembly line for mainstream commercial purchase. The popularity of the cartridge exploded and it became the third-best selling round for the Winchester Model 70s during the interwar period. In Europe, the round was known as the 5.6x35mm and it mostly found a home in bolt-action and single-shot weapons.

There are three main uses for the 22 Hornet, which displays a shocking versatility for this unassuming round. The three main applications of the .22 Hornet are:

After the Second World War, the cartridge began to fall out of favor for a few reasons. One major one was that the primary American manufacturers of the round changed the bore diameter. What’s more, the .222 and .223 Remington cartridges were specifically designed to compete with and overtake this round due to their similar size and increased velocity.

Still, the round continued to exist and sell quite well despite an increasingly competitive market. It’s niche still remains in the world of varmint hunters and some competition shooters. The light recoil is an attractive prospect, particularly for young, injured or smaller shooters who find other calibers to be too powerful for them to shoot accurately.

Deer Hunting and the 22 Hornet

It seems worth briefly addressing the question of whether or not you “can” hunt deer with the .22 Hornet. The short answer is: yes. It is entirely possible to drop a deer with a 22 Hornet.

The longer answer is that while this is possible, the .22 Hornet is by no means the ideal round for deer hunting. You might put the deer down with a single round if you happen to be an excellent shot. Chances are better that you’re just going to wound the poor creature and have to put it down with a second shot – likely one from a caliber more suited to hunting deer.

Put simply, it’s unlikely the round is going to penetrate deeply enough to damage a vital organ. It might put a deer down with a clean headshot. But you’re really better off going with another, more powerful cartridge.

Many manufacturers have chambered rifles for .22 Hornet, primarily as single shot and bolt action rifles. Several revolvers and single shot pistols can also be found for the .22 Hornet. Ammunition in this caliber is also easy to find, since most major manufacturers sell many varieties of the ammo. And with costs that are comparable to other ammunition in this category, the .22 Hornet is favored for its performance and affordability.