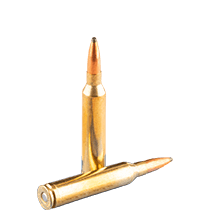 Live Inventory
Introduced by Remington in 1962, the 7mm Magnum has become a favorite among large game hunters. It shoots flat, hits hard, and is accurate enough to be common among F class competitive target shooters – who use the 7mm Magnum on targets at 2,000 yards! Learn More
per page

Introduced by the Remington Arms Company in 1962, the 7mm Remington Magnum was inspired by the .375 H&H Magnum, and was released at the same time as Remington's new Model 700 rifle.

7mm Remington Mag ammo was designed for hunting large game in North America at long distances, has taken elk 500 yards out, and succeeds against moose and bear. This cartridge has a reputation for shooting flat and hitting hard, characteristics needed to hunt game on the plains in America as well as Africa, where hunters commonly use the 7mm Magnum to take impala, antelope and warthog.

The round is from the belted magnum family of cartridges. This refers to any cartridge with a pronounced belt, though these rounds are overwhelmingly for rifles. Holland & Holland originated this concept to space out some of its more powerful rounds. The reason was that non-bottlenecked rounds could be pushed far enough into the chamber to cause catastrophic failure in the weapon. The belting of the magnum rounds successfully prevented this.

The .375 H&H Magnum isn’t just the parent round for the 7mm Remington Magnum, it’s the parent round for virtually every cartridge in this family. In fact, the belt became such a standardized feature of magnum rounds that today many rounds have it as a feature despite it not making much sense from a practical perspective. Newer cartridges are rimless and thus beltless, with a sharp shoulder replacing the belt and fulfilling either the same function or providing the same look.

The origin of this class of cartridge lies in a competition between British firearms manufacturers to find new applications for the recent innovation of smokeless powder. Pretty soon, every British ammunition manufacturer was making their own version of the belted magnum and they were most popular for hunting big game in Africa. It also found a home on the plains of the United States, in the form of the 7mm Remington Magnum.

The Versatility of the 7mm Rem Mag

The versatility of this cartridge is a significant advantage for hunters, as the marketplace contains a wide variety of ammunition in this caliber for sale. Bullets commonly weigh between 110 and 175 grains, and muzzle velocities can achieve as much as 3,500 feet per second, which results in about 3,100 foot pounds of muzzle energy. Where the 7mm Mag really shines is downrange performance, where the bullet is still traveling more than 2,200 feet per second and maintaining over 1,700 foot pounds of energy at 500 yards. The cartridge is sold with a variety of bullets, from pointed soft point to technologically advanced designs like the Nosler Partition.

Employed in competitive shooting at distances as great as 2,000 yards and especially popular among F-class shooters, competitive shooters appreciate the moderate recoil of the 7mm Mag, limiting fatigue for long days of shooting. The excellent ballistic coefficient is another advantage, which contributes to the extreme accuracy possible with this cartridge.

Law enforcement agencies use the 7mm Remington Magnum for sniping and counter-sniping tasks, and U.S. Secret Service snipers previously used the 7mm Mag until the .300 Winchester Mag was adopted in its place.

The 7mm Remington Mag and the 300 Winchester Magnum are, in fact, as many shooters know, rivals on the market. The American market in particular is a big fan of magnum rounds, perhaps as a part of the overall American love of speed. Whether or not the speed is necessary from any perspective is a matter of hot debate in the shooting communities. Magnum fever really took hold in the United States during the 1950s, and it’s not clear that we ever really lost it.

Each of these rounds were part of a boom in the cartridge market after World War II. Americans came home from the Western and Pacific fronts and took to the fields to hunt game. At the time of its release in 1962, the 7mm Rem Mag was the fastest American cartridge that had ever been produced. In most ways, it was exactly like the .375 H&H Magnum. The one change that made all the difference in the world was the evolution in powder that had taken place in the last 50 years. The result was a round that traveled 3,000 feet per second with 160-grain bullets.

Among hunters, it’s not unfair to say that there are 7mm Rem Mag guys and there are 300 Winchester Magnum guys. There’s a lot of overlap between the specifications and capabilities of each. However, as is often the case with ammunition aficionados, people swear up and down that their very similar round is superior to another very similar round. For example, consider the Federal Premium 7mm Rem Mag Nosler Partition round and compare it to the 300 Win Mag equivalent. They are separated by 5 grains of bullet weight and about 100 fps of muzzle velocity. That's rather insignificant. So what really are the differences between the 7mm Remington Mag and the 300 Win Magnum?

So which is “better”? As one might imagine this is largely a function of what you’re doing with the round. The Remington Mag is going to be a better round for smaller game like mule deer, or game where having a more lightweight rifle is going to pay dividends, like bighorn sheep and mountain goats.

The Winchester Mag round, however, is better suited for larger game like elk, moose or caribou – or basically anything you’re going to find out on the African savanna. This is due to its larger diameter and the resulting ability to shoot larger bullets. This does not mean you can’t use the Winchester Mag to shoot mule deer or the Remington Mag to shoot elk. Again, these rounds have very similar ballistic profiles.

Learn about how 7mm Rem compares to the .30-06 Springfield in our .30-06 vs 7mm Caliber Comparison article.

The 7mm Remington Magnum caliber is versatile and widely available, and is used by shooters across the globe – including hunters of medium to large game, competitive shooters, and law enforcement agencies. Most major firearms manufacturers sell a rifle chambered in 7mm Mag, a cartridge that is still going strong after 50 years and will definitely be around for 50 more.