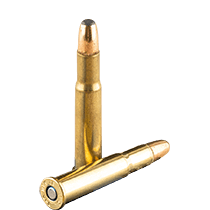 Live Inventory
Initially designed for use in the Winchester Model 94 Rifle, the .32 Winchester Special is likely the only cartridge that was marketed to handloaders. This round is also ideal for hunting medium-sized game, as it is similar in performance to the .30-30 Winchester. Learn More

Winchester designed the .32 Winchester Special rifle cartridge in 1901, and explained their rationale for developing this cartridge in their 1916 catalog:

"The .32 Winchester Special cartridge, which we have perfected, is offered to meet the demand of many sportsmen for a smokeless powder cartridge of larger caliber than the .30 Winchester and yet not so powerful as the .30 Army."

The .32 Winchester Special case uses a necked-up .30-30 Winchester. Bullet diameter is 0.321" and the bullets commonly weigh between 165 and 170 grains, muzzle velocities range between 2,280 and 2,400 feet per second, and muzzle energies range between 1,900 and more than 2,100 foot pounds. The bullets are mostly manufactured in various soft point configurations, including Remington’s Core-Lokt bullets and Federal’s Power-Shok bullets. The two rifles most commonly found that fire the .32 Special are the Winchester Model 94 and the Marlin 1892, both well known lever action rifles.

While the answer to questions like these may be lost to time, it is fascinating to speculate just how these developments came about. The .32 Special has a loyal group of supporters still, sufficient enough that at least three major manufacturers still produce the cartridge. And it seems that it will still be in production for many years to come.