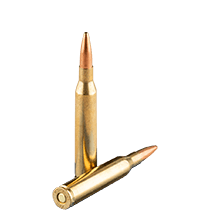 Live Inventory
Because of the wide variety of bullets available, the .25-06 is a great choice for varminting as well as hunting game as large as elk. Based on the venerable .30-06, .25-06 ammunition offers a lighter, faster and flatter shooting bullet that excels at long ranges. Learn More
per page

In the early 1900s, Charles Newton earned acclaim as a designer of ammunition with his .22 Savage, .250-3000 Savage and many more cartridges bearing the Newton designation. He also held patents for many different designs of projectiles and firearm assemblies, including trigger groups.

Newton, in his time, was a successful inventor of a large amount of ammo and mechanisms for firearms. The best known of all his great inventions is the .25-06 cartridge. He based this on a .30-06 case, which he necked down to take a bullet with a diameter of 0.257 inches. The result was a remarkably versatile cartridge that came closer to the holy grail of being "one gun for all occasions" than any other cartridge past or present.

In 1969, Remington brought the wildcat cartridge into the mainstream by chambering their Model 700 and Model 40X rifles in .25-06. Many other manufacturers since then have also produced .25-06 rifles and .25-06 ammunition.

The .25-06 launches a soft point bullet weighing 100 grains out the muzzle of a rifle at 3,230 feet per second. The resulting muzzle energy exceeds 2,300 foot pounds. Bullets can weigh between 87 and 130 grains, and various manufacturers today sell no less than 17 different loads. Shooters can pursue a wide variety of game with these loads, including animals as diverse as prairie dogs and elk.

.25-06 ammo enjoys the advantage of being a powerful cartridge, yet only delivers moderate recoil. The rifle can therefore be lighter than other calibers with similar power. Consider that the recoil of an eight-pound .270 Winchester rifle and 6.5-pound .25-06 rifle is virtually identical when firing the same 130 grain bullet. This may not appear to be a significant advantage at first glance, but imagine how much that extra pound and a half feels after hiking all day in the mountains in pursuit of elk.

The .25-06 retains its place on the list of most popular U.S. hunting cartridges, and for good reason. This caliber, with its versatility and portability, is a great addition to the collection of any hunter.