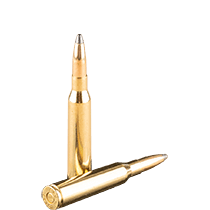 Live Inventory
The 6.5x57mm is well known among European hunters for its effectiveness when used for deer hunting. Although not widely used in American hunting, 6.5x57mm ammo would make an excellent choice for short- to medium-range whitetail and mule deer hunting. Learn More

Just before the turn of the 19th century, the 6.5x57mm Mauser was introduced to be fired from rifles built with the M88 action. Despite this, no military ever adopted the cartridge, yet European and American civilian hunters have used the 6.5x57mm with great effect on medium-sized game.

Many shooters compare the performance of this cartridge to that of the 6.5mm Swedish. As a result, the 6.5x57 is one of the most prevalent for hunting deer in Germany – where hunting laws, locally the Bundesjagdgesetz, state that deer-hunting cartridges must deliver a minimum of 1,356 foot pounds of energy at 100 yards, and the minimum bullet diameter for certain deer is 6.5mm with the same energy requirements.

The 6.5x57mm was initially introduced with a round nose bullet weighing 154 grains that exited the muzzle with a velocity of 2,400 feet per second. Improved powders and bullet designs since then have allowed hunters to shift to bullets weighing less.

The performance of the 6.5x57mm is comparable to the .260 Remington, and its versatility is possible due to the wide range of bullet types and weights that are produced for the cartridge. One of the lightest bullets is the 92.6 grain T Mantel, a soft point bullet with gentle recoil and decent stopping power (shooters note that it is particularly well suited for roe deer). The 140 grain Doppelkern bullet, loaded by RWS, is on the opposite end of the spectrum with a bullet design and performance that is very similar to the Nosler Partition. Between these two extremes are a multitude of choices that allow this cartridge to be great for hunting both medium and some large game.

Today, the cartridge can be found in single and double barrel rifles, and even the occasional drilling rifle.