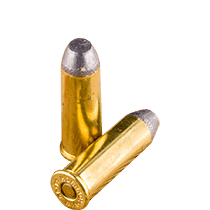 Live Inventory
Today, the .44-40 Winchester is enjoyed by cowboy action shooters, but it was originally a popular cartridge among real cowboys in the late 1800s. During its peak in the early 19th century, there were rifles and pistols that used the .44-40 – making ammo management much easier. Learn More

Introduced the same year named for their new lever action rifle, the Model 1873, shooters know the .44-40 Winchester by a few different names – the .44 Winchester Center Fire (WCF), .44 Winchester for short, or some called it the .44 Largo.

This new rifle and cartridge swaggered boldly into the shooting community, being carried to the peak of gun culture in the late 1800s by Colt's introduction of their Frontier Six-Shooter. This revolver was based on the immensely popular Single Action Army, and was chambered in the .44-40 Winchester. The travelers and adventurers moving West during that time were able to carry ammunition of only one type for both their rifles and handguns. This simplified the logistics of supplying for their firearms, a feature valuable enough both then and now that Winchester has chambered their Model 1873 rifle in .357 Magnum.

The new round was not limited to those firing Winchester rifles, as Remington and Marlin quickly released their own weapons chambered for the round. Colt offered its wildly popular Single Action Army revolver in an alternate chambering known as the Colt Frontier Six-Shooter, and Smith & Wesson introduced the New Model 3. The round found favor among law enforcement as well as hunting enthusiasts. Despite falling out of favor, the 44-40 is still known as being perhaps the most prolific deer round ever manufactured.

The Gun That Won the West

It’s impossible to discuss the 44-40 Winchester without also discussing the Winchester Model 1873, popularly known as “The Gun That Won the West.” James Stewart starred in a popular Western in 1950 entitled Winchester 73, named in honor of the iconic rifle.

The weapon debuted in 1873, and was manufactured for 50 years before being put out to pasture around the same time as the final days of the West as frontier – New Mexico and Arizona were both admitted to the Union in 1912. The weapon could also be chambered for .38-40 and .32-20, each of which were likewise compatible with both rifles and pistols.

The Model 1873 is commonly reproduced to this day. When shopping for reproductions, one frequently encounters weapons chambered for the Colt 45 military round. This is not period correct, as this was a proprietary round for the Colt company’s weapons.

One of the most sought-after rifles for collectors is a special 1875 edition of the weapon called "One of One Thousand.” The barrel produced a superior grouping and received set triggers and special finishes. These fetched a then-hefty $100 – the equivalent of $2,300 today. A less popular version of this was the “One of One Hundred.” While the One of One Thousand version sold 136 rifles, the One of One Hundred version only sold eight. The 1873 as a whole, however, sold a whopping 720,000.

Cowboy action shooting led to a resurgence of interest in these rifles and classic weapons of the American West in general. Italian manufacturer Uberti makes some of the highest-quality Model 1873 rifles and carbines on the market today. These reproductions, however, are chambered for .357 Magnum and .38 Special rounds, not the original 44-40, which can correctly be called “The Cartridge That Won the West.”

So ubiquitous was the Model 1873 that someone apparently just left one leaning against a tree and never came back for it. This is known as the Forgotten Winchester, and it was found in Great Basin National Park leaning up against a juniper tree. The stock was buried in several inches of soil and vegetation, so the rifle had been sitting there for several decades before being found. The story went viral thanks to a Facebook post about the weapon.

This Forgotten Winchester was found through a rather amazing process. The park had been attempting to prevent campfires from spreading into wildfires. As part of this effort, park staff went around the park looking for artifacts. Archaeologist Eva Jensen happened upon the weapon, saving it from the Strawberry Fire, which destroyed the tree less than two years later – and would have destroyed this enigmatic rifle along with it.

The rifle went to the Firearms Museum at the Buffalo Bill Center of the West in Cody, Wyoming. It was x-rayed at a local hospital and given the patient name “Rifle.” The chamber was unloaded, but the buttstock contained a 44-40 concealed in compartment. Research found that the cartridge was manufactured between 1887 and 1911 by the Union Metallic Cartridge Company. Inspection of the serial number found that the weapon had been manufactured as part of the 1882 run.

You can visit the Forgotten Winchester at the Lehman Caves Visitors Center of Great Basin National Park, where it sits on permanent display.

The 44-40 Winchester and Performance

Union Metallic Cartridge started producing the .44 WCF round, but when they released it, it was with the designation .44-40. This new name followed the convention of listing first the caliber of the bullet (.44) followed by the powder charge (40 grains). UMC refused to include Winchester's name in their product descriptions, while Winchester refused to accept another company's name for a cartridge that they had developed. The .44-40 descriptor eventually became better known and more used, so Winchester eventually compromised. They now refer to the cartridge as the .44-40 Winchester.

The .44-40 Winchester performs respectably by today's standards for pistols, as an LRN bullet weighing 200 grains has a muzzle energy of 688 foot pounds and a muzzle velocity of 1,245 feet per second. Many deer and game of similar sizes have been taken by this cartridge in the last century and a half, and there's no reason to think that will change anytime soon. Generally speaking, however, .44-40 ammo sees most action today in the hands of a cowboy action shooter – as a loading made specifically for the sport, with the heavy 225 grain LFN bullet, easily makes the minimum power factor.

By 1942, the cartridge was largely obsolete. Newer, more modern rounds had eclipsed it. In the 1950s and 60s, however, the round experienced a bit of a resurgence – thanks to Colt’s reintroduction of the Single Action Army and Frontier. Moreover, the round sees a lot of use in both metallic silhouette shooting and the aforementioned cowboy action shooting, forms of competitive shooting taking their cues from the Old West.

Cowboy action shooting, however, mostly requires the use of period-correct weapons, though there are some exceptions such as Wild Bunch competitions, where turn-of-the-century equipment is allowed. Competitors are required to dress in Western-style clothing and must choose a “Western” sounding alias for competition. The Gun That Won the West is very much at home, particularly in the Western 3 Gun or Cowboy 3 Gun, which requires the use of a pistol, a rifle and a shotgun.

The .44-40 Winchester, whether used to recreate the times of the Old West or to bring home a deer with a short-range shot, is still serving its shooters well.