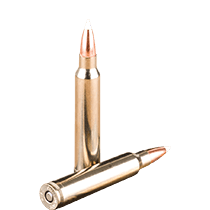 Live Inventory
With ballistics similar to the .300 Winchester Magnum, the .300 Winchester Short Magnum is gaining in popularity among hunters and competitive shooters due to its accuracy and performance for hunting medium- and larger-sized game. Learn More

In 2001, as part of a group of short magnum cartridges released in the early years of the new millennium, Winchester released the first of its Short Magnums – the .300 Winchester Short Magnum, commonly referred to as .300 Win Short Mag or .300 WSM. Designed for American hunters, the ammunition used a standard .300 caliber bullet, but the .300 WSM appeared like a short, stubby-looking round compared to its .300 caliber siblings.

The .300 Win Short Mag was designed to be fired from a smaller rifle with a 24-inch barrel, and was capable of being carried deep into the woods or high into the mountains without losing the velocity and takedown power of the higher-powered .300 cartridges. In this, it was successful.

The .300 Win Short Mag bullet measures .308 inch in diameter and fits securely in a rebated rim bottleneck case. Although not the parent case, the .300 WSM shell was inspired by the .404 Jeffery, a round more than a hundred years old, designed to take down Alaskan brown bear and African game.

The Short Mag round may look like similar cartridges that house a .308 caliber bullet, but the .300 Winchester Short Mag brass was specially constructed to handle a higher pressure than other, more traditionally designed belted magnums like the .300 Winchester Magnum. Sometimes called a belted case, older belted magnum casings feature a two- to four-millimeter “belt” directly above the extractor groove at the bottom of the shell, which helps with headspacing and problems with over-insertion.

But the new, more modern .300 WSM features a heavy shoulder that eliminates the risk and makes the ammunition load without the traditional belt. Observant shooters can see the immediate differences when comparing the Winchester Short Mag cartridge to the original .300 Mag cartridge – a sharp shoulder angle of 35 degrees makes the modern round shorter and wider, offering easy feeding and the additional advantage of more efficient powder ignition and burn.

The .300 WSM comes loaded with a large rifle magnum primer, a 1:10 rifling twist, and has a maximum pressure of 63,817 pounds per square inch (psi). Although the pressure is high, most factory and hand loads don’t max it out. When the round is that hot, it becomes too powerful and most shooters ultimately sacrifice accuracy to heavy recoil, and end up wishing they opted for less pressure and easier shooting.

In most cases, it’s difficult for handloaders and wildcat crafters to reach a better velocity and muzzle energy than commercial-grade factory loads.

When Winchester created the Short Magnums (the company also released Short Mags in .270 Win Short Magnum and .300 Short Action Ultra Mag calibers, although they didn’t become nor remain nearly as popular as .300 WSM ammo), it wanted to provide the power and performance of the largest .300 calibers, but without the necessary size and powder. With the .300 WSM, Winchester reached its goal. The round finds the same velocity as the .300 Win Mag, with 10 percent less powder than the larger ammunition and with no loss in performance.

Because of the wider design of the .300 Win Short Mag shell, manufacturers fit larger volumes of powder in close proximity to the flash hole, giving the round more uniform and consistent ignition. With the superior engineered design and greater powder burn efficiency, the cartridge generates massive amounts of power, strong muzzle energy, and heart-stopping velocity.

Yet, like other ammunitions, the .300 WSM isn’t perfect. Because of its strong stopping power and the huge amounts of energy expelled from a small, compact firearm, it creates a high bolt thrust and strong recoil. It is, after all, a magnum round, specifically designed to have a lot of power in a short-barrel rifle. Novice shooters should proceed with caution and good hunters need both discipline and experience before venturing into the wilderness with a gun chambered in this caliber.

It’s even classified as an ammunition with a delta L problem, a distinction set by the Commission Internationale Permanente (C.I.P.), the European equivalent to the United State’s Sporting Arms and Ammunition Manufacturers’ Institute (SAAMI). The delta L problem signifies that the ammunition may have feeding and/or chambering issues that interfere with its proper functioning.

The CIP encourages shooters to be aware of this issue, especially when using these firearms in dangerous game areas.

It’s easy to see that the .300 WSM is a force to be reckoned with. It not only performs at the maximum level of .300 calibers, but its increase in velocity over the .30-06 Springfield follows almost a linear increase in propellent, unlike the .300 Win Mag, which needs significantly more powder to propel its projectile at higher speed.

Winchester designed the .300 Short Mag for rigid, short-action rifles that could perform with the same accuracy as the large .300 Win Mag, but without the cumbersome weight and size. Both Browning and Winchester released short, light, 24-inch barrel rifles made as backpacking guns that are easy to carry through brush and up hillsides.

Because of their short action, .300 WSM ammo cycles easier and faster than longer rifles, giving an added benefit for shooters of smaller stature. They’ve also found a home among less active hunters who may struggle to keep up their field fitness between hunting seasons.

A variety of firearms are available chambered in .300 Win Short Mag, the most popular being the Winchester Model 70. Called the “Rifleman’s Rifle,” the M70 is a bolt action rifle with an M.O.A. three-layer trigger system for extreme accuracy. It features Winchester’s famous three-position safety, which shooters can easily maneuver with the thumb. The firearm barrel is crafted from cold hammer-forged, high-grade steel and is both strong and durable.

Winchester also chambered its XPR rifle in the .300 Win Short Mag. These rifles combine rugged and durable construction with innovative modern technology to bring shooters a quality rifle that can handle any elements Mother Nature throws at them. The XPR series of rifles features Winchester’s superior trigger system, as well as hardened steel components, which feature a blued finish to protect the firearms from corrosion.

Other firearm manufacturers, such as Savage, Browning, and Remington, have also chambered rifles in .300 Win Short Mag.

The .300 Winchester Short Magnum cartridges can take down most of America’s medium and large game, ranging in size from 200 to 880 pounds. Its ability to penetrate through the toughest of animal skins and hides makes it more than efficient to harvest such game as:

With the ammunition’s ability to remain accurate over a long range, this cartridge is great for both forests and plains, where long, flat shots are necessary for humane kills. Depending on a shooter’s surroundings and type of ammunition used, .300 WSM projectiles can reach targets from 300 to 1,000 yards without issue.

In general, hunters welcomed the new cartridge with a positive response, as the .300 WSM offers improvements upon existing legendary cartridges with updated case design, cleaner burning powders, and optimized bullets. But for some shooters, the .300 Win Short Mag may feel like too much.

For those hunters who find it necessary to reduce the recoil and bolt thrust to retain accuracy, there are options available. Muzzle brakes and suppressors can minimize the felt recoil and make the firearm easier to handle. These additions should be used with caution and shooters should understand the functions of the modifications to ensure safety, accuracy, and longevity of the rifle barrel.

Shooters should also watch for heavy carbon fouling when using recoil-reducing suppressors and brakes, which can decrease the dimensions of the chamber, causing an increase in pressure and forcing bullets to higher velocities. Make sure to thoroughly clean the firearm after every use, removing carbon buildup and reducing the risk of misfire.

Like other ammunitions, the .300 WSM comes in a variety of forms, with different functions, from a range of manufacturers. Some of the most common configurations shooters see in the caliber include:

Most popular ammunition manufacturers offer rounds in .300 Win Short Mag. Shooters can choose from brands like:

With the .300 WSM, long-range and big-game hunters can expect great performance from a shorter cartridge and a shorter action. The case design provides the same high performance of the original large cartridges, but without the size and weight. Since being accepted by the market, many manufacturers are producing a variety of ammunition types, giving shooters the ability to select the perfect ammo for their needs – proving the .300 Winchester Short Magnum is unlike other .300 caliber rounds and that it stands in a class of its own.