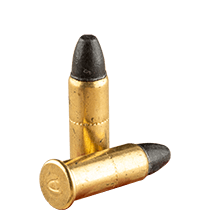 Live Inventory
Winchester introduced the .22 Winchester Auto cartridge for its Model 1903 rifle. Similar in performance to the .22 Long Rifle (except that it fires a heavier bullet), the .22 Auto never achieved the same acceptance among shooters as the iconic .22 LR. Learn More

In 1903, Winchester introduced their .22 Winchester Automatic cartridge for their Model 1903 semi-automatic rifle. There were no other firearms built to fire this cartridge during that time or since.

The case itself is slightly thicker and longer than similar rimfire cartridges, which was done intentionally so that rifles in this caliber could not accept other .22 rimfire rounds. This is because most .22 caliber cartridges of the time were charged with black powder, and residue from black powder cartridges would quickly render the action of the Model 1903 inoperable.

The Winchester Model 1903 is noteworthy because it is the first commercially available semi-automatic firearm to come off the production line from Winchester. The weapon was designed by the famous T.C. Johnson, who came on board at Winchester in 1885. He quickly gained renown as a designer of successful firearms.

Johnson was the Connecticut-born son of the president of the Yale Safe and Iron Company. An educated man, he graduated from the Yale Sheffield Scientific School in 1884. His training was in industrial engineering and he worked at a number of manufacturing organizations prior to coming on board at Winchester, primarily as a draftsman.

Before coming to work with Winchester, Johnson studied under one of the most famous gun designers of his generation: William Mason. He worked alongside Mason, designing new weapons, many of which improved upon prior designs of John Browning. The Model 1903 is often cited as Johnson’s first success. Winchester, for their part, had a lot riding on the rifle, as it was their first release after parting ways with the Browning brothers. This was their attempt to prove to the world that the Winchester name meant something without the Brownings.

In addition to the Model 1903, he was also the mastermind behind a number of groundbreaking designs sold by Winchester, including:

By 1907, he was the company’s chief designer. Between the time Winchester hired him in 1885 until he died in 1934, Johnson’s name appeared on no less than 124 Winchester patents.

The Winchester Model 1903 was renamed as the Winchester Model 03 in 1919. It underwent a partial redesign in the 1930s, after which it became known as the Model 63. Among other things, this weapon was chambered for the 22 Long Rifle rather than the 22 Winchester automatic. The chambering change led to an explosion in the rifle’s sales, effectively sealing the fate of the round as something for niche collectors with an obsessive interest in the historical Winchester line.

The Model 1903 was available in two variations:

Ten cartridges fit inside the tubular magazine held in the buttstock, which was loaded via a right-side slot. Another curious feature of the production was that the first 5,000 weapons to roll off the line did not have any safety mechanism. After the first 5,000, Winchester added a cross-bolt safety.

This was also a takedown rifle, meaning that it could be very easily broken down and moved from one place to another. Its status as a takedown rifle continued into its upgrade as the Model 63, but the takedown mechanism was one of the improvements made. In the original Winchester Model 1903, a screw lock was used to release a locking ratchet system. In the updated and improved version, the owner only had to turn a takedown screw.

How the Winchester Model 1903 Worked

A very elementary blowback system is what drove the self-loading mechanism of the rifle, where a balanced breech bolt with a weight and velocity balancing out the weight and velocity of the bullets was used. The effect of this is to balance the recoil of the round, preventing the bolt from moving rearward before the round leaves the muzzle of the weapon. The next bullet is then fired with no loss of energy.

This was an ingenious innovation at time the weapon was released and one would expect no less from T.C. Johnson. In fact, it was this novel design that required Winchester to design a special round specifically to work for this mechanism. This made the Model 1903 a bit of a toy and not the most practical weapon in the world, which is why it fell out of the public eye comparatively quickly. When the weapon was redesigned, it was essentially done so to accommodate the 22 Long Rifle, which by that point had become one of the premier rounds in the United States.

An interesting tidbit about this mechanism and the marketing is that Winchester chose to advertise the weapon as an “automatic rifle.” By today’s standards, we would consider it to be a semi-automatic rifle, because it only fires a single round for each trigger pull. Fortunately, so does the Bureau of Alcohol Tobacco and Firearms.

The .22 Winchester Auto performs much like a .22 Long, except that the bullet is heavier – this added weight, however, does not give the .22 Win Auto overall performance gain. The muzzle velocity of the .22 Win Auto 45 grain LRN bullet is about 1,000 feet per second, and the muzzle energy barely exceeds 100 foot pounds.

Winchester’s redesign of their Model 1903 to accept the .22 Long Rifle cartridge effectively displaced the .22 Winchester Automatic from the shooting sports industry, and the ammo was soon obsolete. Since that time, the ammunition has been produced a few times in small batches, the latest run coming from Aguila.

The .22 Winchester Automatic is not really a great round for hunting, and its limited availability reduces the chances that it will be used for plinking. However, the cartridge is interesting for collectors of both ammunition and Winchester products.

Gerard V.I was 100% satisfied with my order, I give you guys 5 stars. Thanks!

James J.I must inform you that, in my opinion, your service is not 5 star but 10 star. Always a pleasure doing business with you.