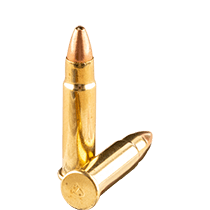 Live Inventory
Remington introduced the 5mm Magnum as an improved version of the .22 Mag. from 1969. While the 5mm has slightly better performance, it was never quite as popular as the .22. Ammunition is still being made today, although there are no rifles in production. Learn More

In 1969, Remington Arms Company designed and introduced the 5mm Remington Rimfire Magnum cartridge, chambered in two of their bolt action rifles – the Model 591 and Model 592. The company ended production in 1973, after having produced about 52,000 rifles. No other major manufacturer ever produced any rifles chambered in 5mm RRM.

In 2008, Taurus International announced that they would manufacture one of their Tracker series handguns chambered for the 5mm RRM. They marketed the nine-shot double action revolver to varmint shooters. At that time, Aguila Ammunition simultaneously announced that they would start producing 5mm RRM ammo as well, which went into production in conjunction with Centurion Ordinance in 2008.

An improved rimmed bottleneck design based on the .22 Winchester Magnum Rimfire, the  5mm RRM bullet is 5.2mm in diameter, weighs 30 grains, muzzle velocities reach between 2,300 and 2,400 feet per second firing a JHP bullet, and muzzle energy is approximately 350 foot pounds. The cartridge enjoys a positive reputation for its accuracy, but is appreciated even more for its ability to terminate small game and varmints.

The Beginning of 5mm Remington Ammo

While the round has similarities with the .22 WMR, it was built from the ground up as a totally new round of ammunition by Remington, and was specifically designed as a stronger round capable of handling the pressure involved in firing a 5mm round at 33,000 psi. The diameter of the bullet is the same as the more recently innovated .204 Ruger, which is a centerfire cartridge – unlike the 5mm Rem, which is a rimfire cartridge.

One of the main differences between the 5mm Remington Rimfire Magnum rounds and the similar .22 WMR is that the former shoots at a much higher velocity and contains more energy than either the .22 WMR and the .17 HMR. This makes it a perfect round for small game and varmints, especially at long ranges, thanks to its superior accuracy.

The Aguila/Centurion is the most common commercially available version of this round on the market today, and it comes in two different types. The first is the original, known popularly as “White Box.” This is a 30 grain soft point, traveling at an impressive 2,300 feet per second. The other is known as “Varmint” or “Yellow Box.” This is also 30 grain, but is a hollow point round and travels at 2,400 feet per second, which is why it is preferred for varmint hunting. In chronography-tested performance, the rounds tend to perform about 100 feet per second faster than advertised.

Some people still love the original 591M and 592M rifles, despite the fact that they haven’t been manufactured in years. Gun auctions and websites sell them for hundreds of dollars to a small and devoted core of aficionados. Thompson Center Arms sold weapons chambered for the 5mm Rem Mag ammunition rounds for a time. Taurus International debuted the world’s first handgun chambered for the 5mm at SHOT Show 2008. This announcement was what led Aguila to resume their production of the round, which had largely become obsolete.

Conversions are likewise popular. Fans of the 591M and 592M were left without ammunition for these superior rifles after Remington ceased to produce the 5mm in 1982. In 1994, a man named Mike Craig started a conversion process resulting in what is known as the 5mm Craig. This conversion also included changing the rifles to handle the new centerfire, not rimfire, rounds – which involved changing the bolt of the 591M and 592M rifles, and the installation of a new firing pin. The owners of these rifles now had a way to use their weapons once again. Rights to the 5mm Craig now sit in the hands of Eagle View Arms, based out of Shelton, WA.

The History of Wildcat 5mm Ammunition

The 5mm Rem is perhaps the most popular orphaned cartridge in the history of firearms, with 67,000 shooters left without ammunition when Remington discontinued it. Because it frequently sold for a dollar per round after Remington stopped production, it took a serious level of dedication to keep shooting 591M and 592M rifles.

Enter Mike Craig, a firearms enthusiast from Washington State. He got a deal on a huge lot of 5mm rounds from a sporting goods store on the condition that he also purchase a rifle that would go along with it. At first he planned to flip the ammo and let the rifle sit in his gun safe. However, he soon heard the spirit of the 5mm round calling him. Pretty soon he was shooting his investment.

First, he tried to find a way to safely reload the rimfire rounds. But when this proved unsuccessful, he looked for another way to skin the same cat. The solution he came up with was a custom centerfire. Craig modified the rifles without having to altar the factory spacing of the heads. For a over a decade, these wildcat rounds were the only source of ammunition for these rifles, and he thankfully included information on how to reload the rounds for the dedicated 5mm community.

Craig sold the company when he wanted to retire. While he could have easily discontinued the round, he didn’t want to leave the community without ammo – as Remington had in 1984. Eagle View Arms, for their part, felt they could improve the quality of the round using modern CNC manufacturing technology.

Despite the reintroduction of the round from Aguila/Centurion, the 5mm Craig continues to sell well due to the quality of the rounds produced. So many people changed their firearms over to accommodate the 5mm Craig, with no drop in the overall quality of performance, that there was no need to modify the arms back to their original state.

The Enduring Legacy of the 5mm Rem Mag

So why is this obscure round so sought after despite being officially discontinued for nearly 40 years? Because it’s one of the most effective and deadly rimfire rounds ever brought to market. And there were only 50,000 rifles brought to market by Remington, so the weapons are in short supply.

The other question is why the 5mm Rem Mag was ever discontinued. The reason is simple: When it was first available on the market, shooters weren’t really all that interested. But before production resumed, boxes of 50 rounds were going for as much as $200 – and that was in pre-1994 dollars.

The 5mm RRM hits harder and flies faster than the .17 HMR and .22 WMR, and shoots flatter than the .22 WMR. So it remains a mystery as to why this cartridge experienced so little success in the market. Some firearms authorities say the design and performance of the 5mm RRM were ahead of their time, and the shooting community never fully appreciated the real potential of the cartridge. The 5mm RRM today still maintains a foothold among a dedicated group of varmint hunters, as the Remington rifles produced for the cartridge about 40 years ago are still shooting and serving their owners well.

Gerard V.I was 100% satisfied with my order, I give you guys 5 stars. Thanks!

James J.I must inform you that, in my opinion, your service is not 5 star but 10 star. Always a pleasure doing business with you.