Calvin Coolidge Quotes: Inspirational Quotes from the 30th President of The United States 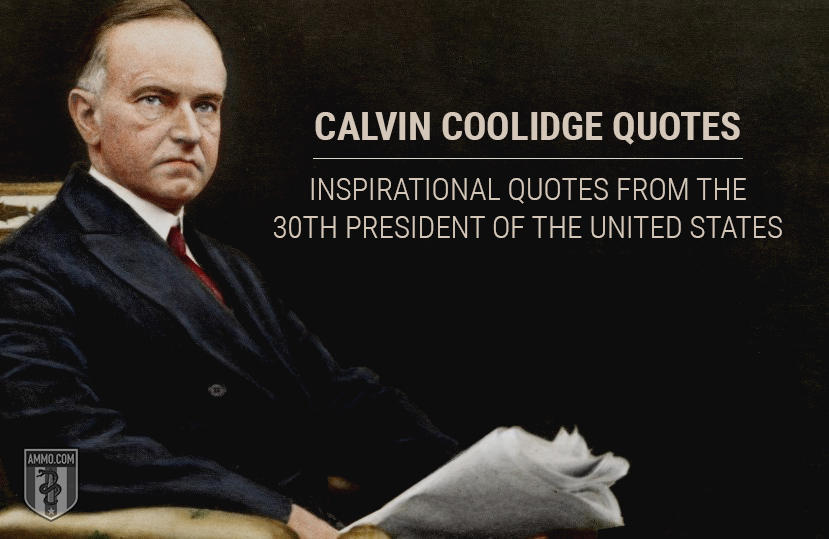 Calvin Coolidge is one of our favorite U.S. Presidents. He served two terms between 1923 and 1929, and was known for being soft-spoken and principled. Nicknamed "Silent Cal," Coolidge was deeply concerned with tax reduction and the federal budget, as well as U.S. intervention abroad in the aftermath of World War I in 1919.

Prior to the Coolidge administration, the U.S. government had grown unchecked for years under the Theodore Roosevelt, Taft, and Wilson administrations. Wealth redistribution, government regulation, and the strength of unions were on the rise during this era of American progressivism.

When President Coolidge and his administration came to power, they helped cut the national debt almost in half, and cut America's tax rates and tax rolls to boot. These cuts worked – unemployment averaged 3.3% during Coolidge's two terms, and the American GDP increased a whopping 17.5%.

President Coolidge was the rare politician who stuck by his principles of government restraint and fiscal responsibility. Below are a few of our favorite quotes:

“Nothing in this world can take the place of persistence. Talent will not; nothing is more common than unsuccessful men with talent. Genius will not; unrewarded genius is almost a proverb. Education will not; the world is full of educated derelicts. Persistence and determination alone are omnipotent.”

Quotes from Calvin Coolidge on Taxes 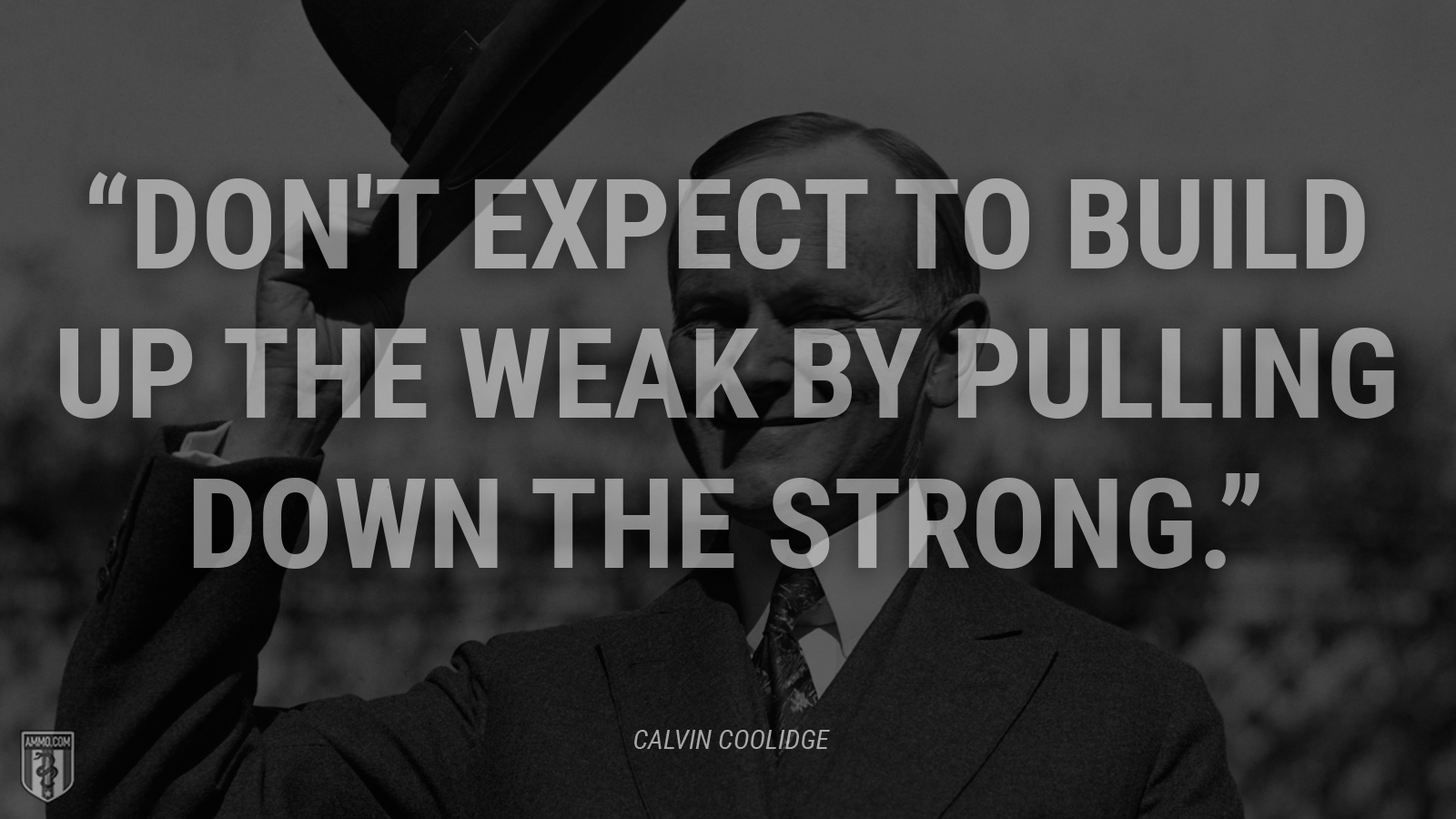 “Don't expect to build up the weak by pulling down the strong.”

“Collecting more taxes than is absolutely necessary is legalized robbery.”

“The wise and correct course to follow in taxation and all other economic legislation is not to destroy those who have already secured success but to create conditions under which everyone will have a better chance to be successful.”

“An expanding prosperity requires that the largest possible amount...be invested in productive enterprise under the direction of the best personal ability. This will not be done if the rewards of such action are largely taken away by taxation.” 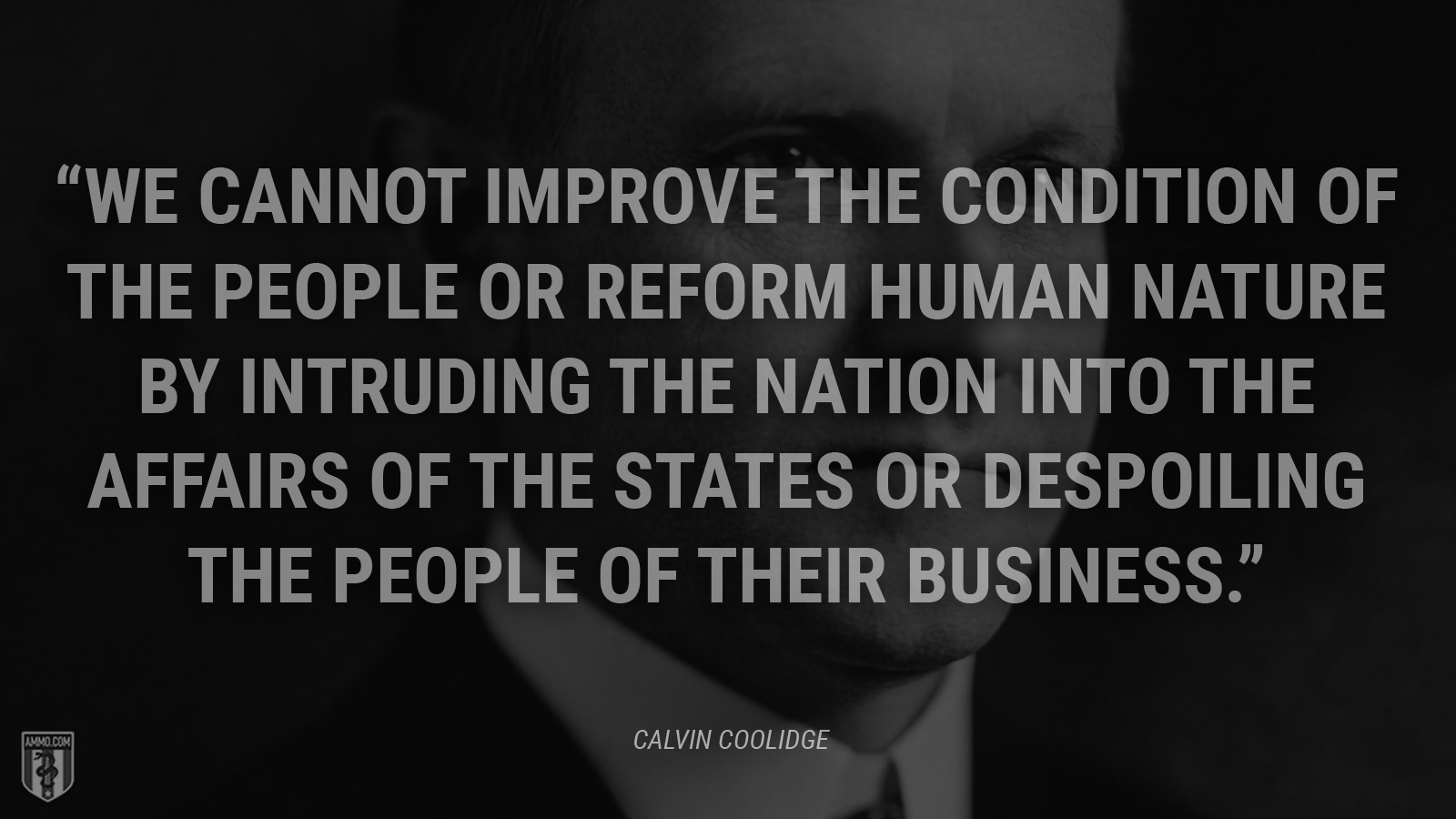 “We cannot improve the condition of the people or reform human nature by intruding the Nation into the affairs of the States or despoiling the people of their business.”

“The success of the Government does not lie in wringing all the revenue it can from the people, but in making their burden as light and fairly distributed as possible, consistent with the proper maintenance of the necessary public functions.”

“I want the people of America to be able to work less for the Government ...to have the rewards of their own industry. That is the chief meaning of freedom.”

“I would like it if the country could think as little as possible about the Government and give their time and attention more undividedly about the conduct of the private business of the country.”

“The property of the people belongs to the people. To take it from them by taxation cannot be justified except by urgent public necessity. Unless this principle be recognized, our country is no longer secure, our people no longer free.” 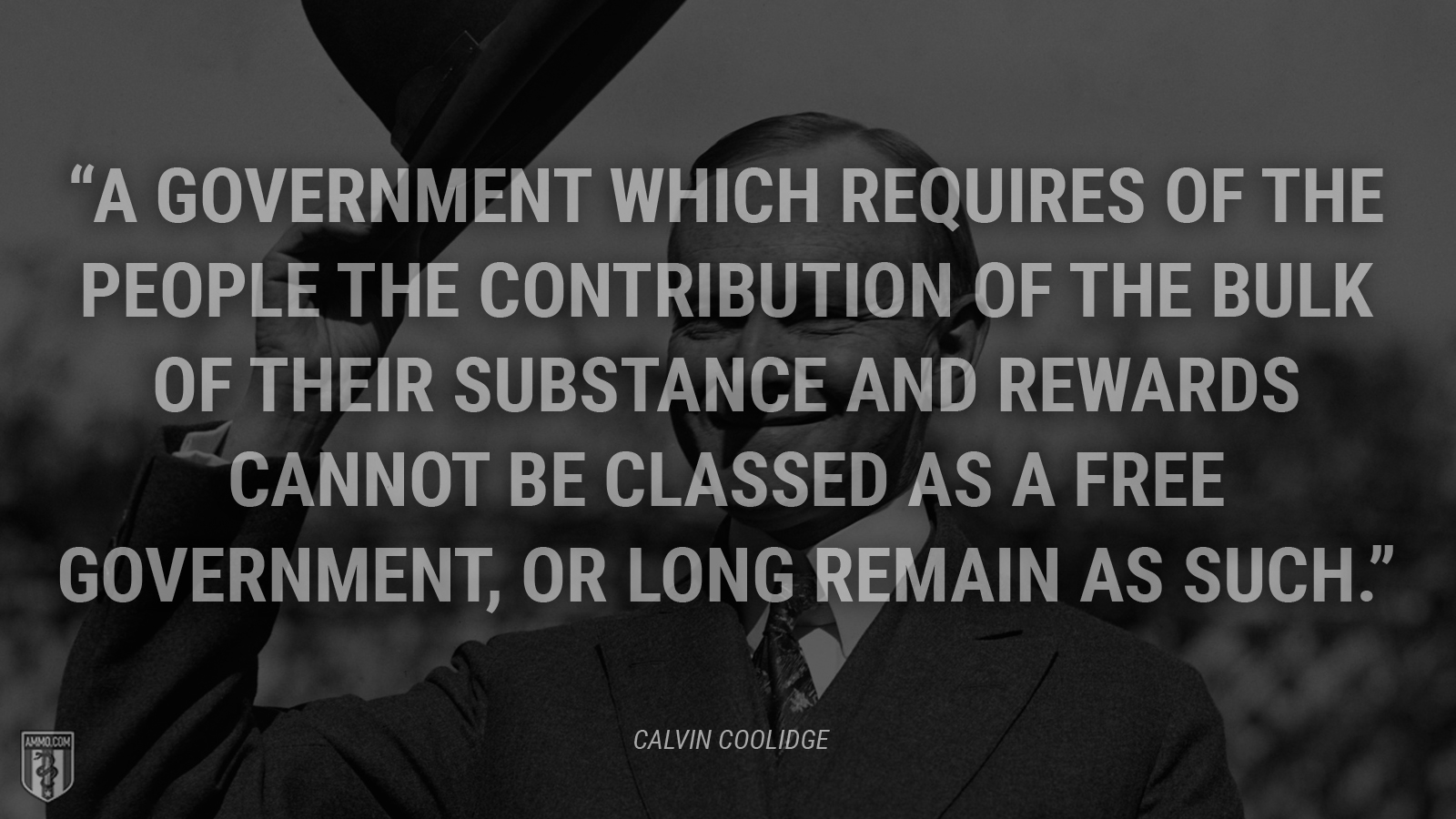 “A government which requires of the people the contribution of the bulk of their substance and rewards cannot be classed as a free government, or long remain as such.”

“We need not concern ourselves much about the rights of property if we will faithfully observe the rights of persons. Under our institutions their rights are supreme. It is not property but the right to hold property, both great and small, which our Constitution guarantees.”

“That tax is theoretically best which interferes least with business.”

“No matter what any one may say about making the rich and the corporations pay the taxes, in the end they come out of the people who toil. It is your fellow workers who are ordered to work for the Government every time an appropriation bill is passed.” 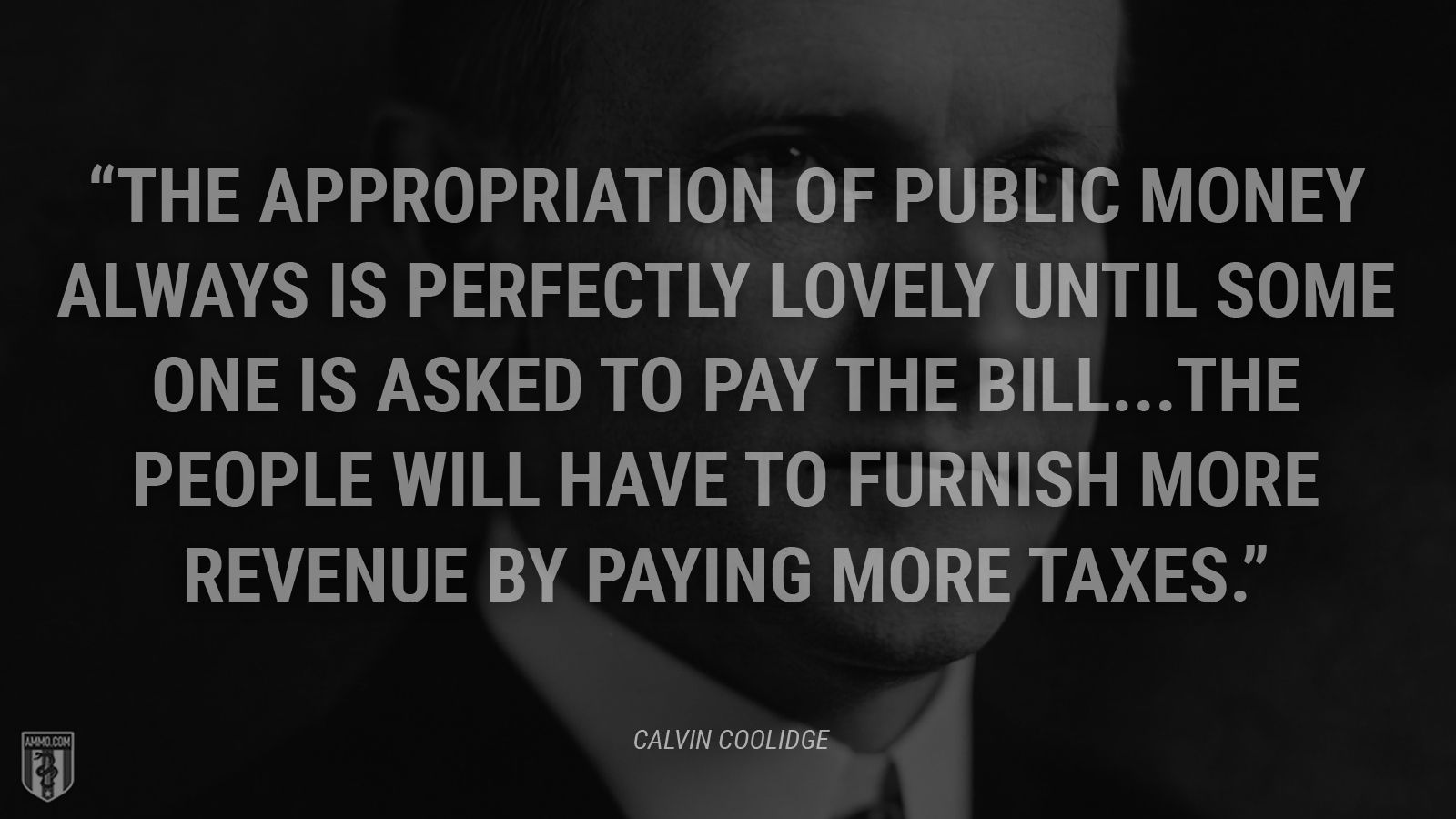 “The appropriation of public money always is perfectly lovely until some one is asked to pay the bill...the people will have to furnish more revenue by paying more taxes.”

Quotes from Calvin Coolidge on Freedom and Rights

“There is no substitute for a militant freedom. The only alternative is submission and slavery.”

“There is no greater service we can render the oppressed of the earth than to maintain inviolate the freedom of our own citizens.”

“Liberty is not collective, it is personal. All liberty is individual liberty.”

“When once the right of the individual to liberty and equality is admitted, there is no escape from the conclusion that he alone is entitled to the rewards of his own industry.” 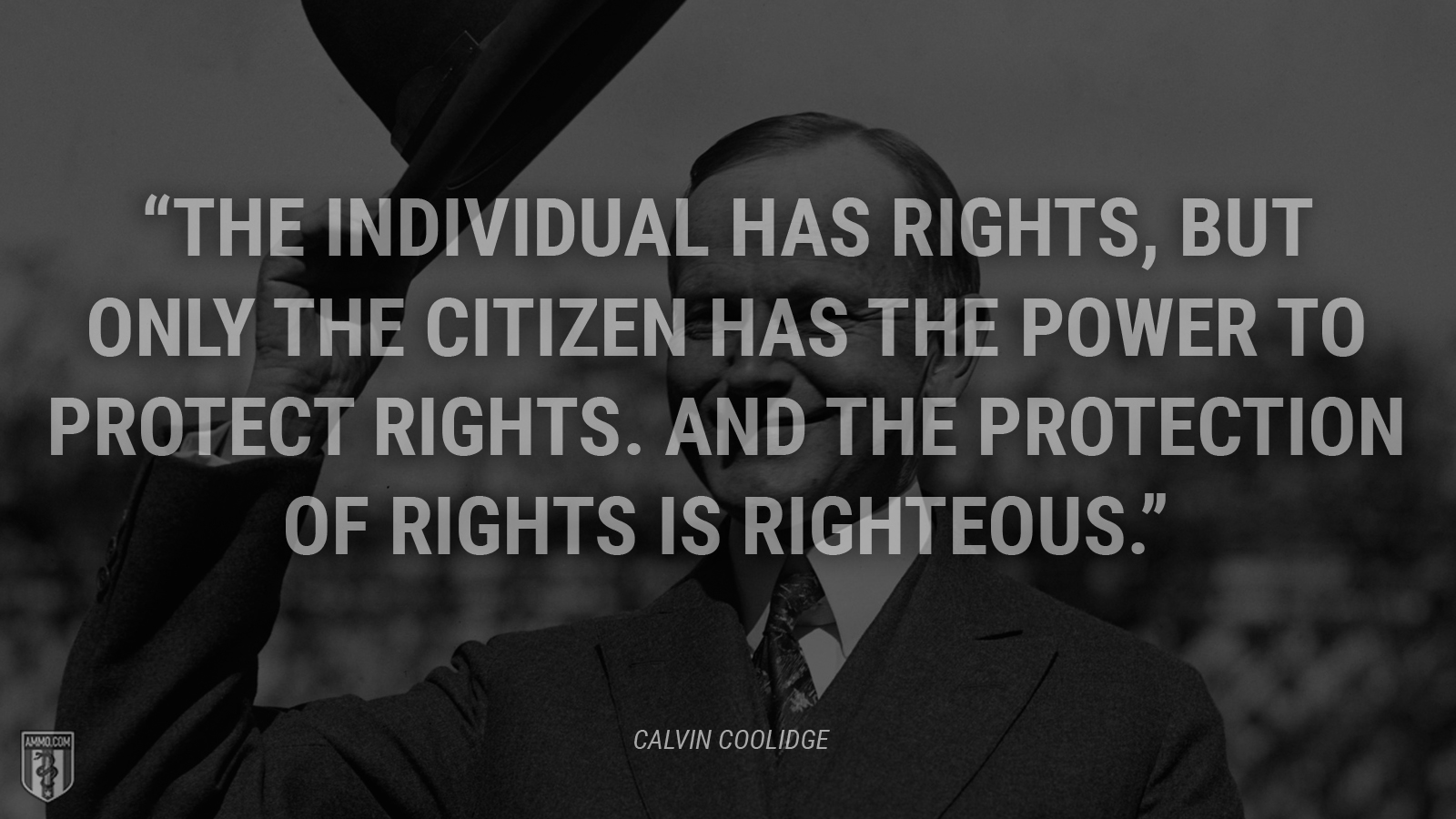 “The individual has rights, but only the citizen has the power to protect rights. And the protection of rights is righteous.”

“Freedom is not only bought with a great price, it is maintained by unremitting effort.”

“When once the right of the individual to liberty and equality is admitted, there is no escape from the conclusion that he alone is entitled to the rewards of his own industry. Any other conclusion would necessarily imply either privilege or servitude.”

“If ever the citizen comes to feel that our government does not protect him in the free and equal assertion of his rights... he will withdraw his allegiance from that government...”

“In its main features the Declaration of Independence...is a declaration not of material but of spiritual conceptions. Equality, liberty, popular sovereignty, the rights of man...are ideals.” 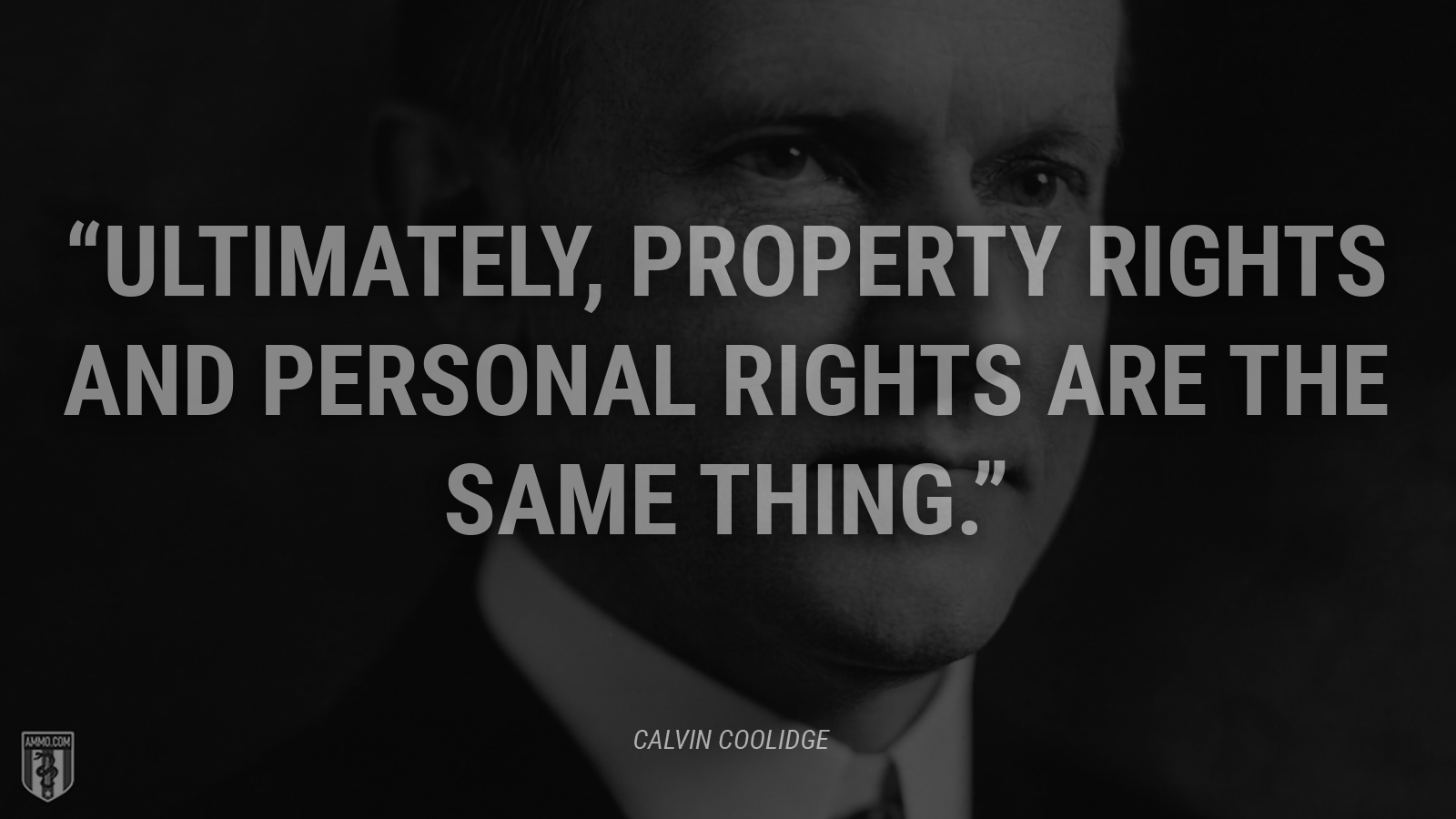 “Ultimately, property rights and personal rights are the same thing.”

“To live under the American Constitution is the greatest political privilege that was ever accorded to the human race.”

“The Constitution is the sole source and guaranty of national freedom.”

“[But] the matchless wisdom that is enshrined in our Constitution...needs constant effort and tireless vigilance for their protection and support.”

Quotes from Calvin Coolidge on Laws and Regulations

“It is much more important to kill bad bills than to pass good ones.” 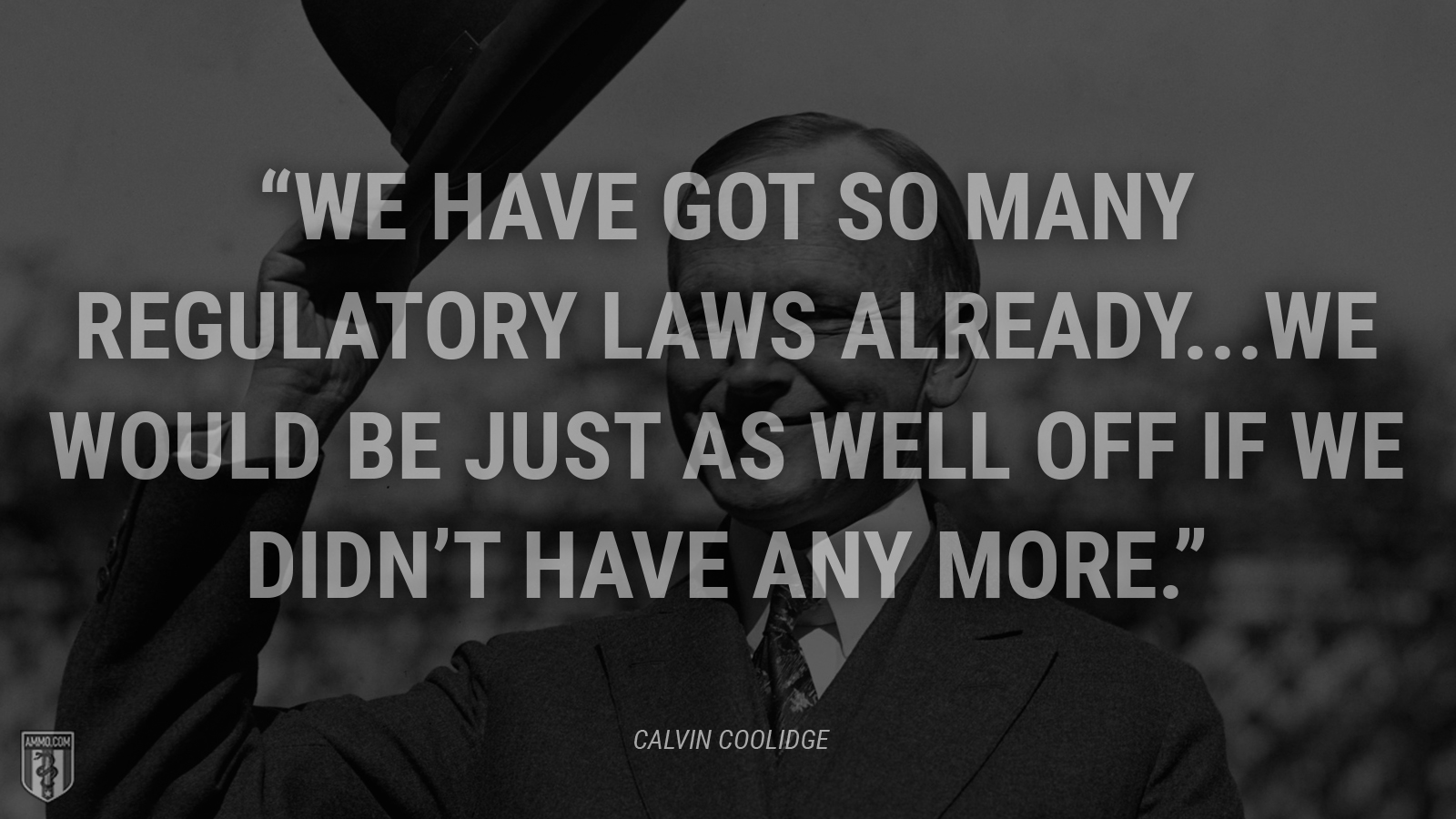 “We have got so many regulatory laws already...we would be just as well off if we didn’t have any more.”

“The people cannot look to legislation generally for success.”

“After order and liberty, economy is one of the highest essentials of a free government.”

“I favor the policy of economy...because I wish to save people...Economy is idealism in its most practical form.”

“Perhaps one of the most important accomplishments of my administration has been minding my own business.” 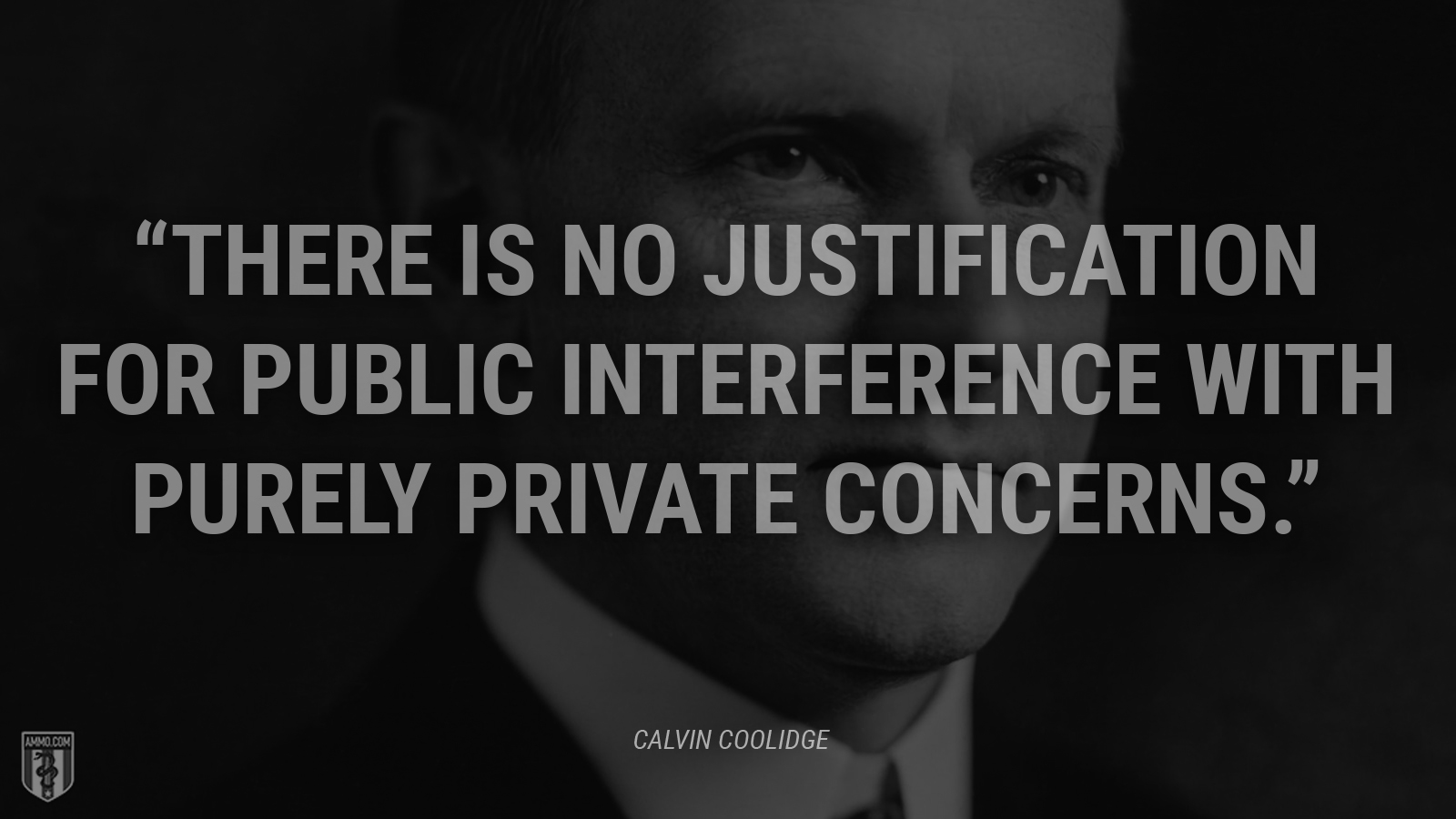 “There is no justification for public interference with purely private concerns.”

“Men do not make laws. They do but discover them. Laws must be justified by something more than the will of the majority. They must rest on the eternal foundation of righteousness.”

“There is scarcely a word in the constitution of any of our States or of our nation that was not written there for the purpose of protecting the liberties of the people from some servitude which a despotic government had at some time imposed upon them.”

“Where commerce has flourished there civilization has increased... Today it is not the battle fleet, but the mercantile marine which in the end will determine the destiny of nations.” 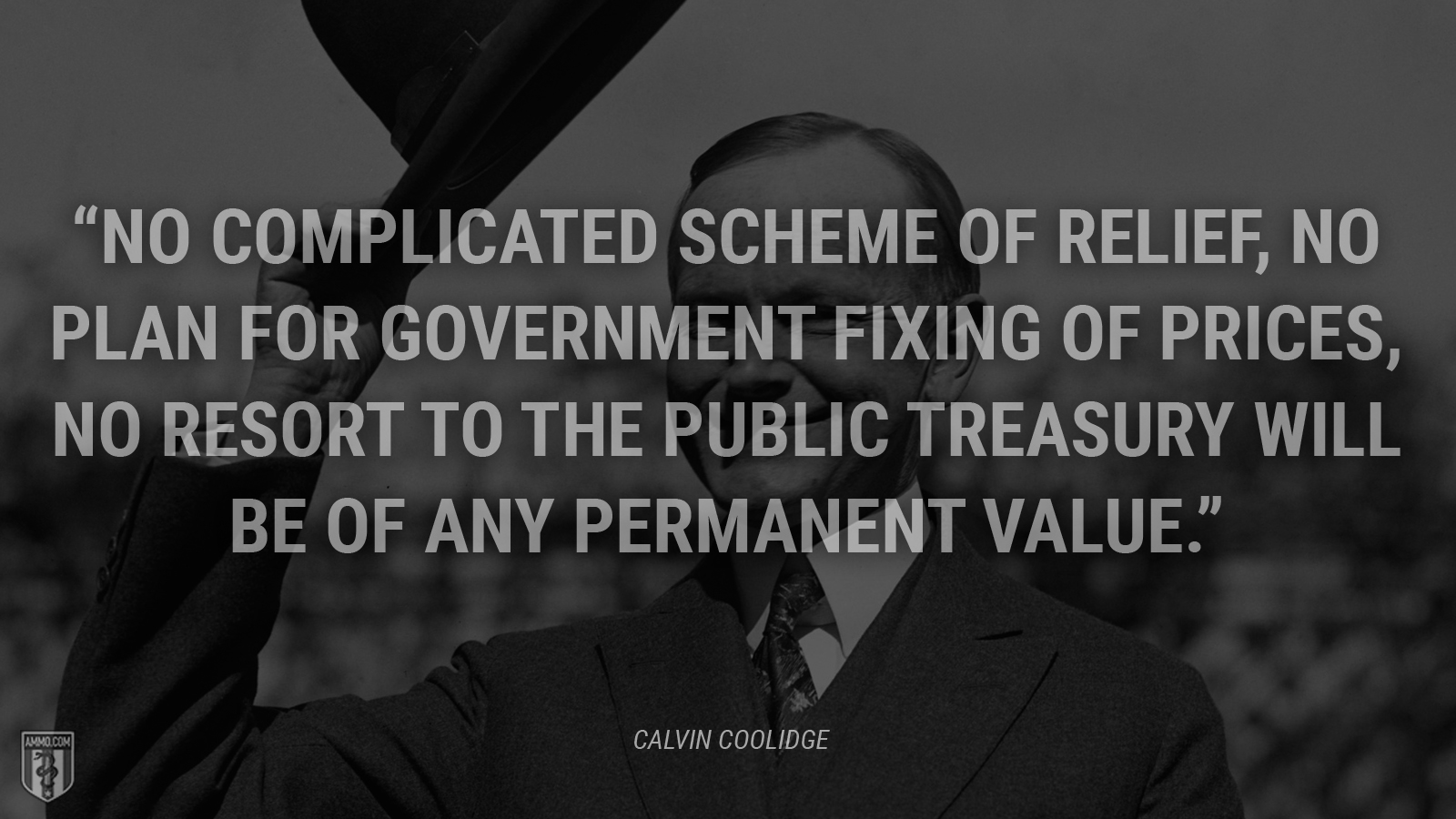 “No complicated scheme of relief, no plan for Government fixing of prices, no resort to the public Treasury will be of any permanent value.”

“After all, the chief business of the American people is business... In all experience, the accumulation of wealth means the multiplication of schools, the encouragement of science, the increase of knowledge, the dissemination of intelligence, the broadening of outlook, the expansion of liberties, the widening of culture. Of course the accumulation of wealth cannot be justified as the chief end of existence. But we are compelled to recognize it as a means to well-nigh every desirable achievement. So long as wealth is made the means and not the end, we need not greatly fear it.”

“Our country is an exceedingly good example of the fact that if production be encouraged and increased, then distribution fairly well takes care of itself... no other country ever approached ours in the equal and general distribution of prosperity.”

“We have had many attempts at regulation of industrial activity by law. Some of it has proceeded on the theory that if those who enjoyed material prosperity used it for wrong purposes, such prosperity should be limited or abolished. That is as sound as it would be to abolish writing to prevent forgery.”

“Government price fixing, once started, has alike no justice and no end. It is an economic folly from which this country has every right to be spared.” 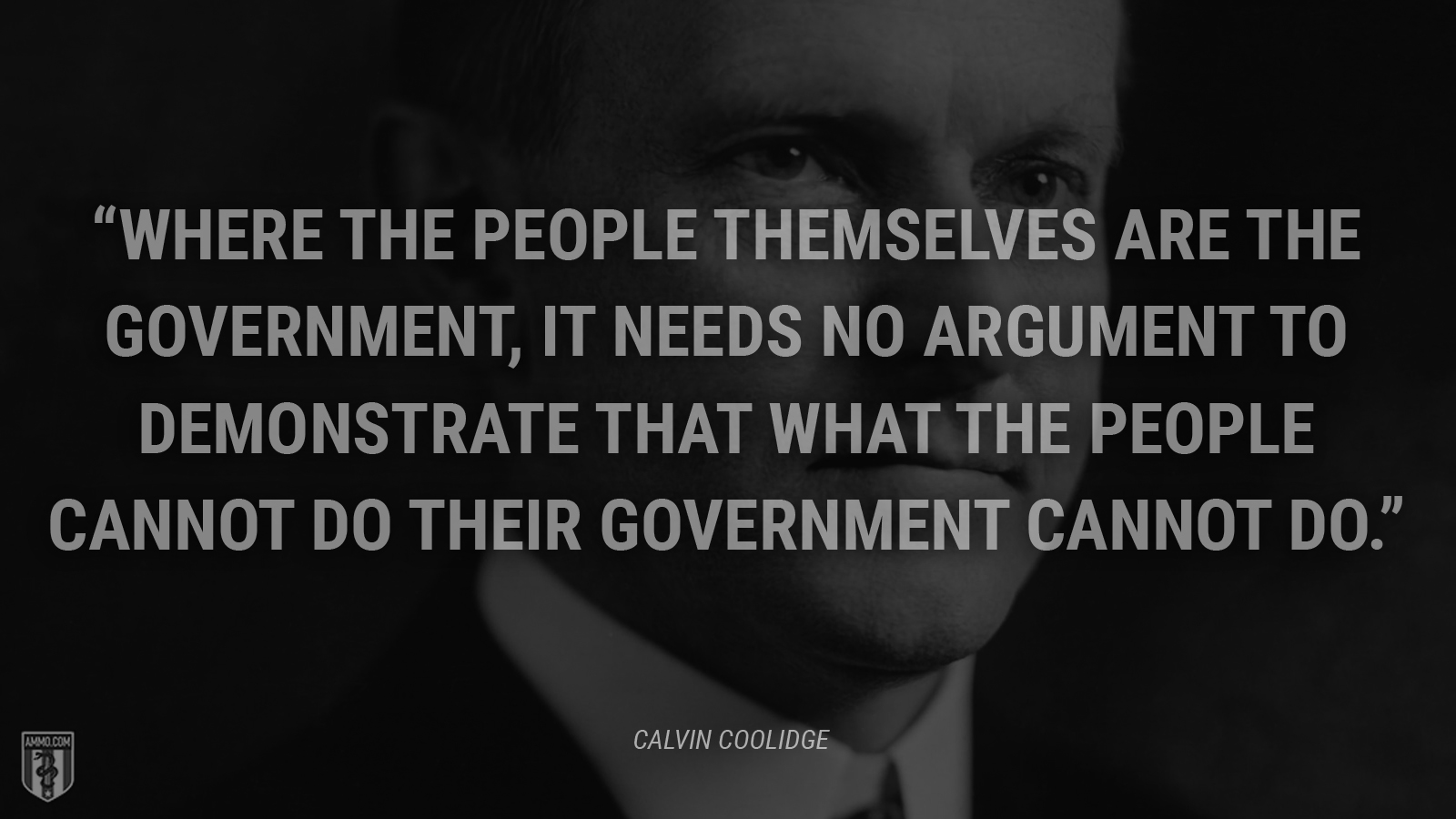 “Where the people themselves are the government, it needs no argument to demonstrate that what the people cannot do their government cannot do.”

“There can be no perfect control of personal conduct by national legislation.”

“[I will not] surrender to every emotional movement seeking remedies for economic conditions by legislation.” 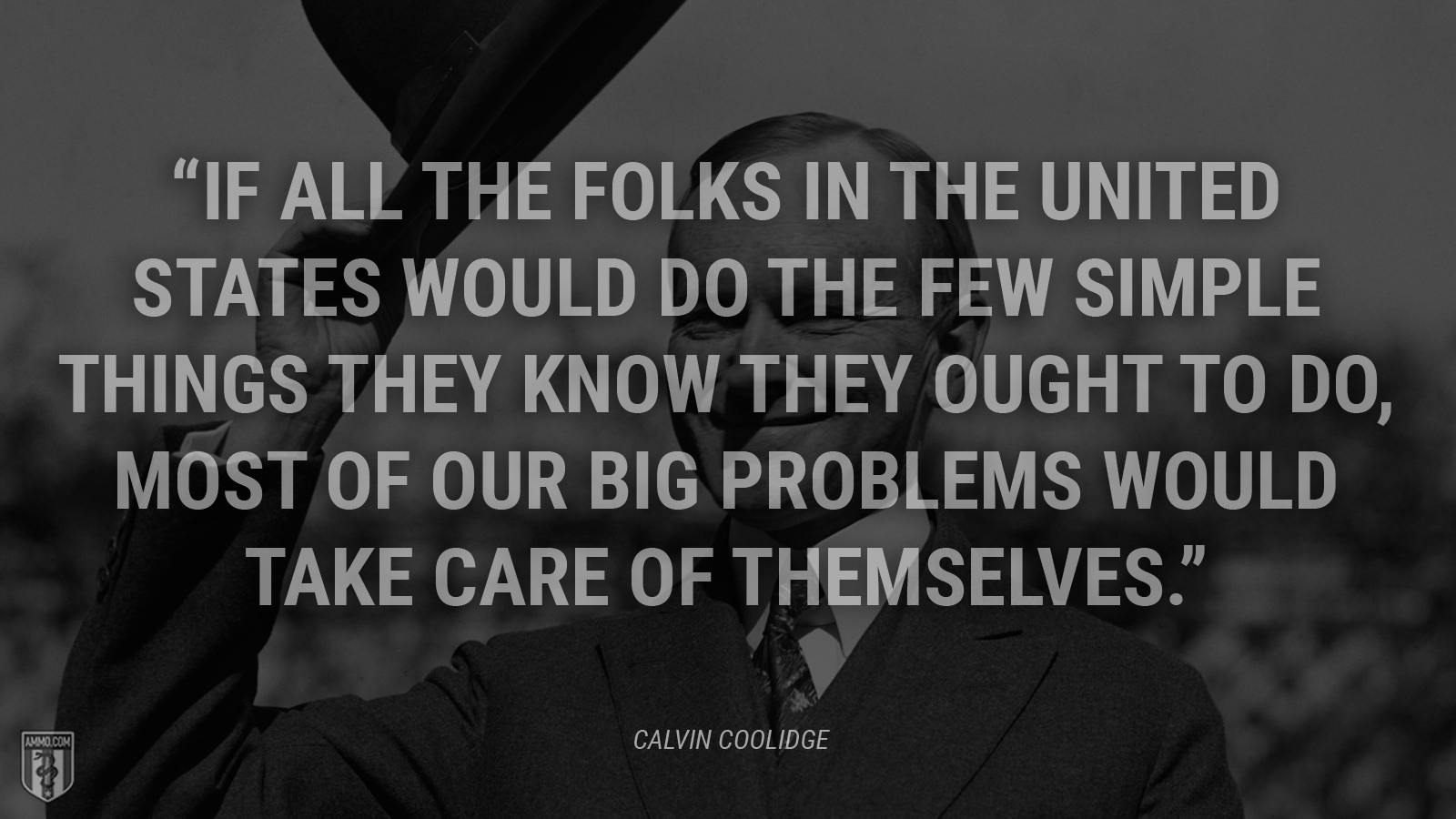 “If all the folks in the United States would do the few simple things they know they ought to do, most of our big problems would take care of themselves.”

“When depression in business comes we begin to be very conservative in our financial affairs. We save our money and take no chances in its investment. Yet in our political actions we go in the opposite direction. We begin to support radical measures and cast our votes for those who advance the most reckless proposals. This is a curious and illogical reaction.”