Rimfire vs Centerfire Ammunition: Learn the Difference Between the Two 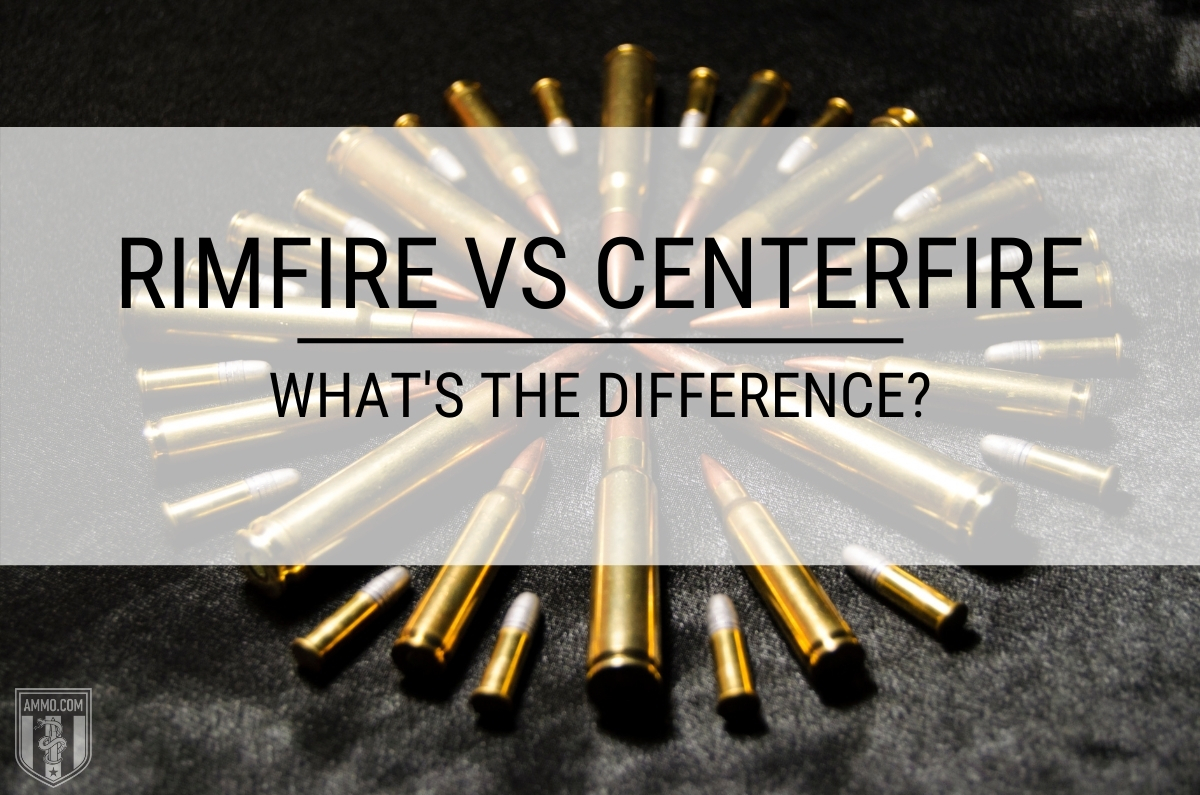 What is the main difference between centerfire and rimfire ammunition, you ask? These are two different types of ammunition that are categorized by how the firing pin ignites the primer compound.

In contrast, centerfire ammo is fired when the firing pin strikes an externally visible primer in the center of the base of the cartridge.

If that doesn’t make sense, don’t worry. By the end of this article you will completely understand the difference between rimfire and centerfire ammo and you will also know which cartridge is right for you!

The difference between rimfire and centerfire ammunition is how the primer compound in the cartridge is ignited to fire the round.

You see, all modern ammunition cartridges are fired using the same principle.  The firing pin strikes the primer, which in turn creates a small explosion, which then ignites the gunpowder that pushes the bullet out of the barrel.

How the primer is ignited will determine what type of cartridge you are dealing with, either a centerfire cartridge or a rimfire cartridge.

What Is Rimfire Ammunition?

For rimfire ammunition, no external primer is visible as the primer compound is completely contained inside the rim of the cartridge.

During the manufacturing process, primer compound is uniformly spread along the inside of the hollow case rim of the rimfire cartridge.  Propellant, either black powder or smokeless powder is then added, and a bullet is seated on top and crimped in place.

When you pull the trigger on your favorite rimfire pistol or rifle, the firing pin strikes the rim of the case causing the priming compound to ignite due to pressure.  This in turn ignites the powder and propels the bullet down the barrel of your firearm.

You can tell when a rimfire cartridge has been fired because the rim of the case will look like it has been pinched, as you can see in the picture. 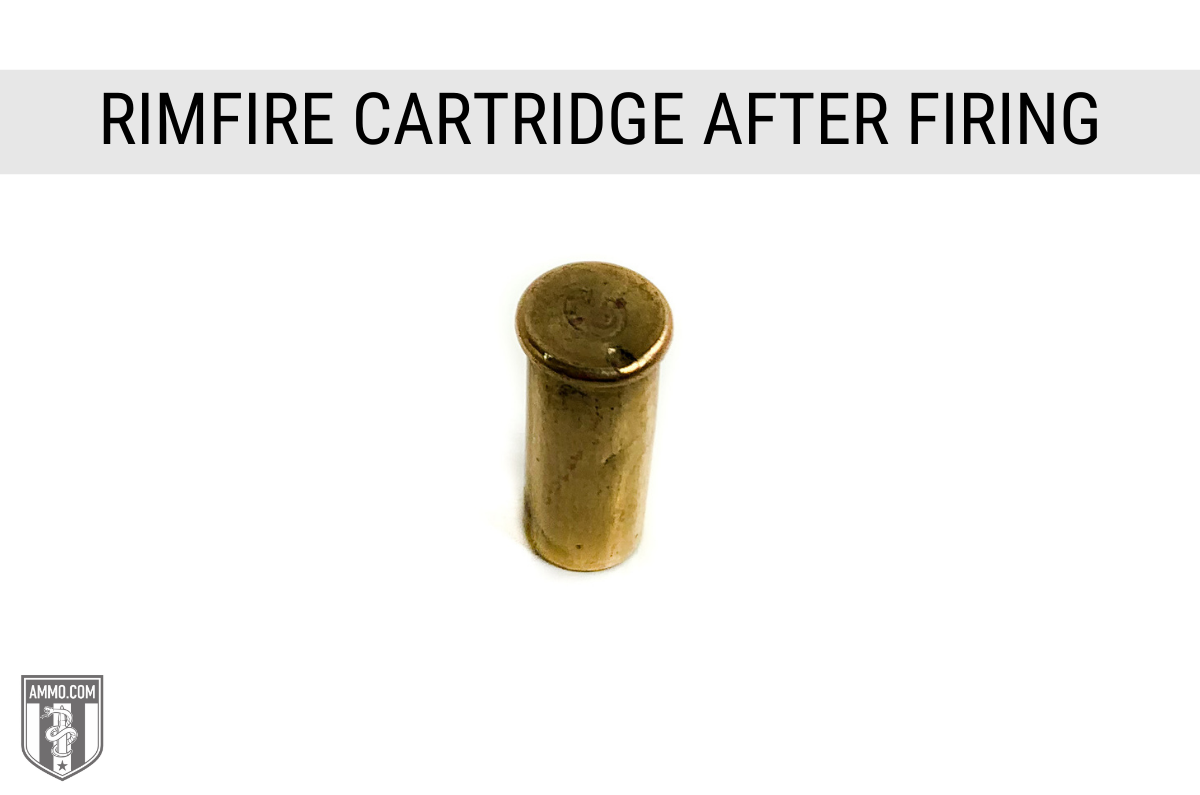 Rimfire ammo typically comes in small caliber rifles and pistols that are appropriate for small game hunting or target practice.

Some popular rimfire ammunitions cartridges are: 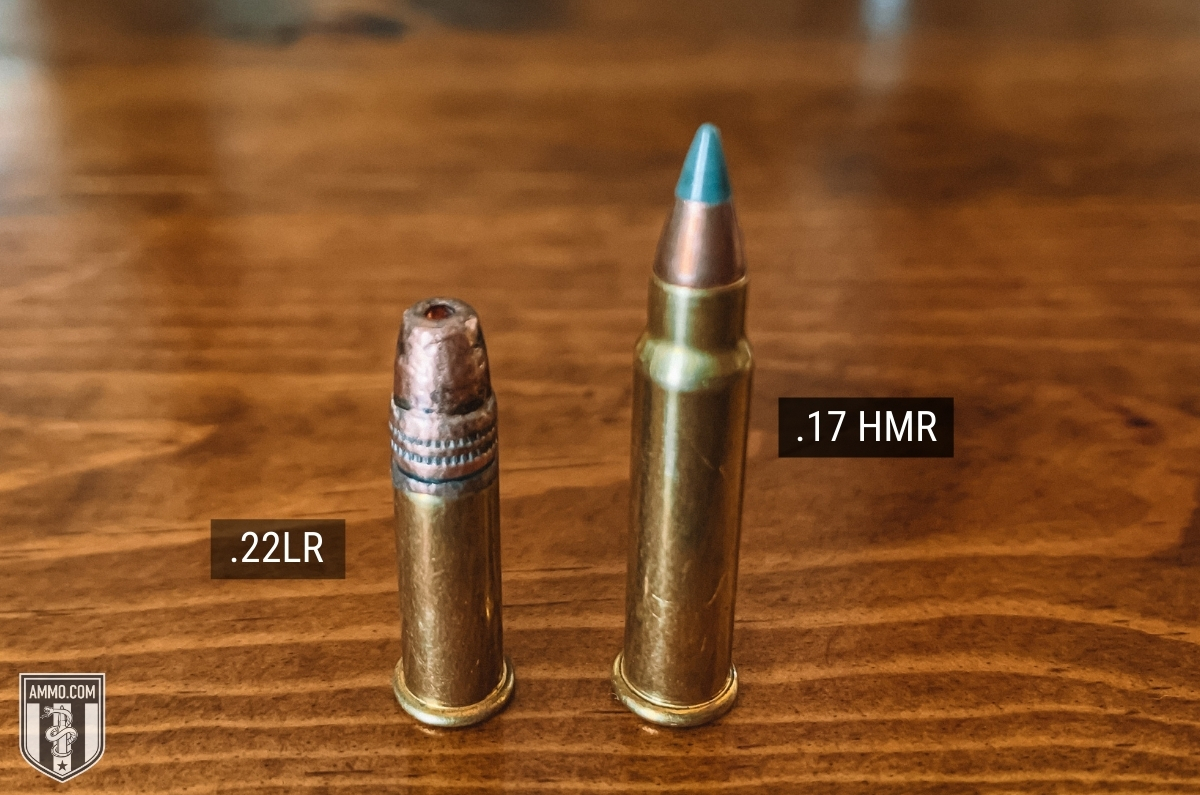 What is Centerfire Ammunition?

Centerfire ammo works on a different principle, where the primer compound is located inside a removable metallic disk referred to as a “primer”. The primer is inserted into a cavity in the base of the cartridge that is specifically designed to hold the primer in place securely by friction.

A centerfire round is fired when the firing pin strikes the primer in the base of the cartridge.

There are two different types of centerfire primers that modern ammunition manufactures use, Boxer Primers and Berdan Primers.  For a general shooter, these two types of primers are interchangeable as both primers work in your centerfire firearm.

Centerfire ammo is typically available in larger calibers and has a wide variety of applications, from home defense to big game hunting to long range target practice. 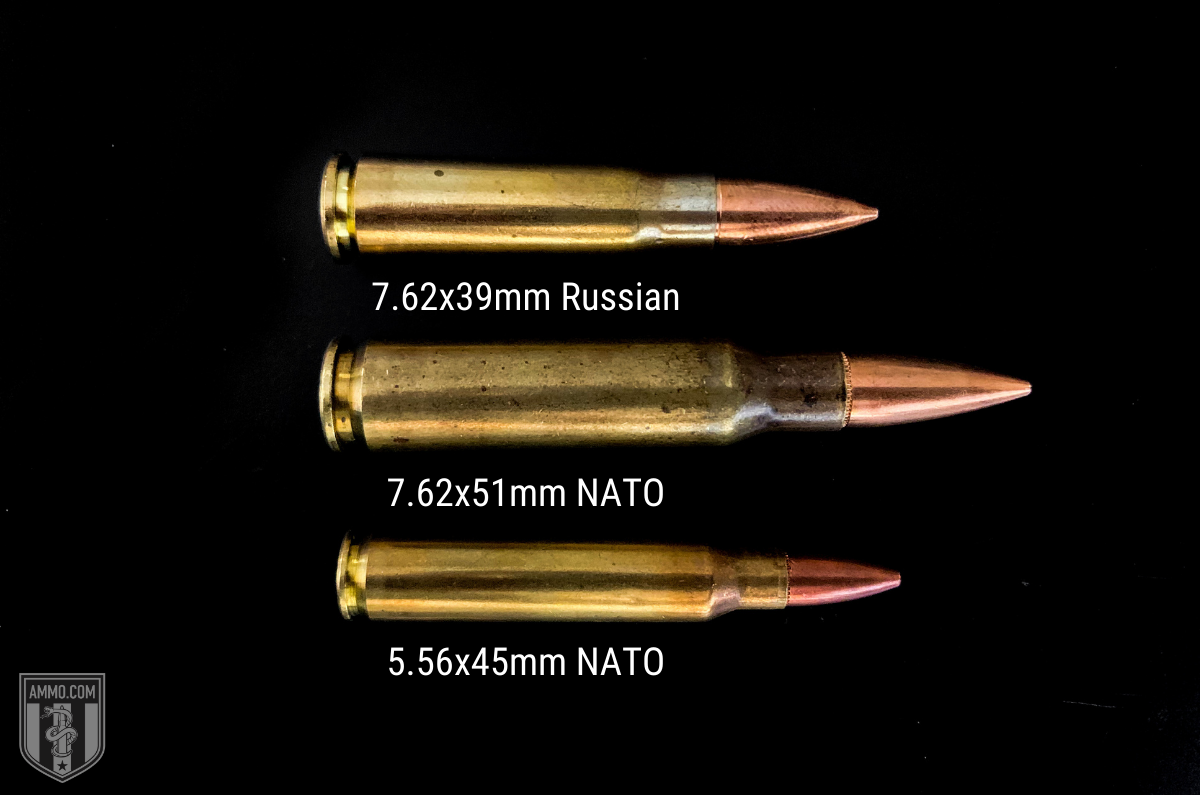 Rimfire vs Centerfire: Which Is Better?

Let’s take a moment to look at the various pros and cons of each cartridge. Centerfire and rimfire have their own unique advantages that can be leveraged to your specific needs.

Firearm Availability and Variety – Rimfire firearms are available in all different patterns, colors, and sizes from numerous manufacturers. From training rifles for children to conversion kits for your military pattern rifles, there truly is a rimfire rifle or pistol available for everyone.

Cost – Rimfire ammunition is relatively inexpensive when compared to centerfire ammo. Typically, rimfire ammo is about 1/10th the cost per round, allowing you to shoot through well over a hundred rounds and not break the bank.

Ideal for Small Game Hunting – Low pressure and flat shooting rimfire cartridge options are ideal for anything from riding your property of vermin to groundhog sized game.

Low Noise – Rimfire ammo is typically a lot quieter than its centerfire cartridge counterparts. This makes it very easy to suppress if desired.

Although there are numerous benefits to rimfire ammunition, there are also several negatives.

Reliability Issues - Ask anyone who has shot rimfire ammo for a long time and they will tell you which manufacturer their firearm “likes.” In your average box of .22 LR, it’s not uncommon to have 1-2% of your box be duds.

Can’t be Reloaded – Since the primer compound is integral to the case design and the rim is deformed during firing, rimfire ammo cannot be reloaded.

Not Viable for Home Defense – Rimfire cartridges are small caliber and low pressure, which means they are not ideal for self-defense as they do not have the stopping power to put down a home invader.

Short Range – Rimfire ammunition is effective out to about 150 yards (depending on cartridge and loading). This makes it impractical and unethical to use at longer ranges (200+ yards).

Caliber Availability – Rimfire ammo is typically only available from .17 to .22 caliber, which limits you to the type of shooting you can engage in.

Higher Pressure – Centerfire cartridges are much thicker and tougher than rimfire cartridges. This allows loadings to be much higher pressure which translates to higher FPS (feet/second) and longer effective ranges.

Ideal for Home Defense – There are a wide variety of self-defense rounds available in centerfire ammo. Hollow points fired out of your favorite Glock or other service pistol will serve you well should the moment come to defend your life or liberty.

Reloadable – Brass cartridge cases are reloadable, meaning they can be used multiple times. Reloaders can customize their ammunition to achieve maximum consistency and accuracy, while also reducing their overall cost of shooting.

Capable of Magnum Loading - A magnum load is fired at a higher pressure to generate higher velocity at the muzzle compared to what the original cartridge was designed for. Magnum loads are very popular for self-defense applications as well as dangerous or large game hunting.

Reliability - Centerfire ammunition is known for its extremely high levels of reliability with modern firearm design. The amount of primer compound in standard and magnum primers is such that it is extremely rare for a centerfire cartridge to be a dud.

Although there are many benefits to centerfire ammo, there are a few drawbacks as well.

Higher Cost - By comparison, centerfire ammo is always going to be more expensive than rimfire ammo. Although centerfire cartridge cases can be reloaded, you still cannot achieve the price point per round that a rimfire cartridge affords you.

More Felt Recoil - For training purposes, especially for children, having a firearm that is comfortable to shoot is a must. Centerfire cartridges are inherently going to have more felt recoil due to higher pressures.

Not Ideal For Small Game Hunting – Generally speaking, centerfire ammo is not the best choice when it comes to small game hunting if you want to have anything left to harvest.

The best round for you is going to depend greatly on the application that you intend to use the cartridge for. There simply is not a “one-size fits all” or “jack of all trades, master of none” cartridge that fits the needs of every shooter.

Are you new to shooting or looking to train your child in the art of accuracy and precision? Then a rimfire rifle or handgun is going to be your best bet.

Perhaps you just want to go to your local shooting range to have a good time and not feel like every time you pull the trigger you hear the cash register sound? Then rimfire is your winner again.

On the other hand, perhaps you are looking for something to defend your home, life, and liberty with? Maybe you love going big game hunting or the vermin on your property are larger than 10 pounds? Then centerfire is where you need to be.

I can say from my own personal experience, there will always be a spot in my gun safe for the trusty .22 LR Remington Model 541 that my father taught me to shoot with - and it will sit right next to the centerfire rifles and pistols that I love as well.