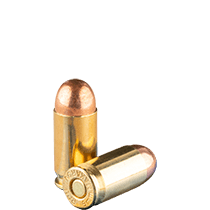 Live Inventory
In the 1930s, the 9x18mm Ultra was introduced with hopes of being adopted by European law enforcement as an improvement to their .380 ACP pistols. While it performs similar to the .38 Special, it didn't gain a large following in its intended market. Learn More

You're free to republish or share any of our handgun caliber histories (either in part or in full), which are licensed under a Creative Commons Attribution 4.0 International License. Our only requirement is that you give Ammo.com appropriate credit by linking to the original article. Spread the word; knowledge is power!

In 1936, Walther Arms collaborated with Gustav Genschow and Company (GECO) to produce the 9x18 Ultra on behalf of the Luftwaffe, the illegally formed aerial branch of the German military. By the time World War II broke out, the Luftwaffe had become the most powerful military force in Europe.

In light of the new military’s impending needs, the Germans had requested a round to replace the less powerful .380 ACP. The 9x18 Ultra was born, keeping the same rim dimensions and 100 grain weight. World War II interrupted the progress of the invention, and the cartridge was not officially adopted until Walther introduced the Walther PP Super (PP Super) in 1972.

The original PP was introduced in 1929. First designed for European police, it quickly became desirable by the newly formed German Luftwaffe – whose secret training required a more powerful weapon and ammo. The Walther PP, along with 9x18 Ultra ammunition, fit the bill.

Introduced in 1972, the PP Super was an all-steel model of the PP, chambered for 9x18mm Ultra ammo. Designed as a police pistol, it was a blowback, double-action pistol with a firing-pin safety and an external slide-stop lever.

When the German police adopted the 9x19mm round as their standard ammunition, the experimental 9x18 Ultra cartridge fell into disuse. In the 1970s, Walther saw a dramatic decrease in sales, with only about 2,000 PP Super pistols sold to German police forces.

Walther withdrew the PP Super from their catalog in 1979.

Released in 1930, the PPK (Polizeipistole Kriminalmodell or Detective Police Pistol) is one of the most popular models in the PP series. It uses a two-piece wrap-around grip construction designed to conceal the exposed back strap and a short barrel and frame. The new design was ideal for police detectives to carry concealed.

In pop culture, the PPK has a diverse claim to fame, which has only increased its popularity:

Walther introduced the PPK/S after the U.S. Gun Control Act of 1968, when the U.S. was Walther’s largest market. One of the provisions of the GCA68 banned the import of handguns that did not meet certain requirements of weight, length and other "sporting" features. The PPK failed to meet these provisions, so Walther combined the PP's frame with a PPK barrel and slide, creating a pistol containing more weight than the PPK. This additional weight allowed the PPK/S to meet the requirements to import into the U.S. And by 1983, Walther was permitted to manufacture firearms in the U.S. The PPK/S is currently manufactured by Walther Arms in Fort Smith, Arkansas, and distributed by Interarms.

In 1969, Walther introduced the PPK-L, a light-weight version of the PPK. Unlike the steel PPK, the PPK-L featured an aluminum alloy frame. The pistols were chambered in .22 LR and .32 ACP to keep the recoil low.

The PPK-L model used the same features of the PPK – including a polished blue finish, brown plastic grips with the Walther emblem, lanyard loop, loaded chamber indicator, and 7+1 magazine capacity.

In 2000, Walther introduced the blue stainless steel PPK/E at the Internationale Waffen-Ausstellung (International Weapons Exhibition). The PPK/E, manufactured by FEG in Hungary, is similar to the PPK/S. Despite the resemblance between the two pistols, the magazines and other PP-PPK-PPK/S parts are not interchangeable with the PPK/E – which can be chambered for .22 LR, .32 ACP, and .380 ACP calibers.

Walther continues to manufacture its PP series in various locations including the United States, Germany, and France. Previously, Walther’s PPK had been manufactured in Walther’s factory in Germany, along with licensed factories operated by Manurhin in Alsace, France, by Smith & Wesson in Houlton, Maine, and Interarms in Alexandria, Virginia. Beginning in 2013, Walther PPK and PPK/S models have been produced by a U.S.-based subsidiary in Fort Smith, Arkansas.

The 9x18 Ultra was widely used by the German military and was influenced by the Soviet 9x18mm Makarov – the most common load at the time, propelling a 100 grain bullet at a velocity of 1,050 FPS at the muzzle. While it wasn’t a stellar performer, it was a dramatic improvement over the ballistics of the .32 ACP cartridges being used at the time. Considering that the performance was similar to the well-established .380 ACP, the 9x18 Ultra didn’t gain a strong following.

After being renamed as the 9x18 Police, several German and Italian companies began to produce pistols and cartridges made for law enforcement agencies. Unfortunately for GECO and Walther, the German police chose to adopt the 9x19mm Luger cartridge for their duty sidearms. Sales of the 9x18mm dropped sharply and, as a result, Walther stopped manufacturing pistols in this caliber and no one has since attempted to revive the cartridge.

Fiocchi currently offers the 9x18 Ultra with one load configuration and marketed with the "Police" name, but no other large manufacturers make significant quantities of 9x18mm Ultra ammunition.

Note: Fiocchi only runs production every three years. If you want a round for historic or show purposes, bullets can be bought individually.

In 1946, Boris Semin designed a 9x18mm round that could function safely in a direct blowback pistol. Semin based his design on GECO and Walther’s 9x18mm Ultra, also for use in a similar weapon. In 1947, Nikolay Fyodorovich Makarov followed suit and designed the Makarov PM pistol. And in 1951, the Soviet Army adopted the Makarov and its accompanying cartridge. The round became known as the Makarov, although that’s not an official designation.

The main difference between the Makarov and 9x18 Ultra ammo has to do with the way the round is measured. Calibers in the Soviet Union were measured by the lands in the rifling instead of the grooves. The Soviets took advantage of this difference and made the round slightly larger than typical 9mms. This was also a benefit to the USSR, because their ammo could not be used by other forces if captured during wartime. Soon militaries of other Eastern Bloc nations followed suit and adopted the round.

One of the most commonly asked questions about the 9x19mm when compared to the 9x19mm is whether or not a 9x18mm can be shot from a 9mm pistol. The answer is a resounding “No!” At first glance one might think that a small cartridge would easily fit into the handgun, but it’s not a correct assumption.

Because 9x18 Ultra ammo is obsolete and extremely difficult to find, it’s easier to compare the ballistics of the similar 9x18mm Makarov. The obvious difference is the size – 1mm may not seem like much, but there are other considerations. The 9mm Parabellum/Luger has a .355" diameter, while the 9x18 Makarov has a .365" diameter. The case of the Makarov is not as tapered as the 9mm, which was designed for lock breech weapons. Also, the Luger operates at higher pressures. The 9mm can go to 35,000 psi while the Makarov, designed for pocket-sized blowback pistols, goes to approximately 23,000 psi.

What does that mean for the uninformed or overly adventurous shooter? The round may fire, but there is a chance that the cartridge may get stuck and not eject. Worst case scenario? As one user said, “Kaboom!”

Since Walther discontinued making the PP Super in 1979, 9x18mm Ultra ammo became scarce. Other weapons that chambered the round include Mauser HSc-80, SIG Sauer P230, and Benelli B76.

Unless you are a collector or auction hound, the ammo isn’t easy to find – but there are surpluses out there. If you intend to buy the rare centerfire cartridges, make sure that they are properly designated as “Ultra” or “Police,” and have the following specs:

While the 9x18 Ultra has become a bullet of historical fact rather than modern use, its place in history cannot be denied. Collectors still value the experimental round for its nostalgia and often lament that it did not stand the test of time.