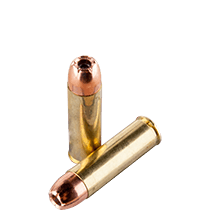 Live Inventory
Introduced in 2003, the .500 S&W Magnum is the most powerful production handgun cartridge in the world – suitable for hunting any size game. The .500 Mag is also popular as a dangerous animal defense cartridge, especially in bear country. Learn More
per page

The .500 Smith & Wesson Magnum, commonly referred to as the .500 S&W, is the most powerful production handgun cartridge on the planet. Affectionately coined the “half-incher,” these bullets grace the top of the big-bore spectrum and can easily take down big game that weighs 1,000 pounds or more.

With its size and strength, the .500 Magnum is a no-compromise round. It features a .500-inch diameter bullet that sits in a semi-rimmed case that’s 1.625 inches long. Together, they reach an overall length of 2.3 inches, a massive round for a handgun.

The .500 S&W round also has the most powerful muzzle energy of handgun ammo to date and ranges from 15 to 40 percent more foot pound force (ft·lb) energy than the .460 S&W cartridge, which is second in size only to the .500 S&W. For instance, a lightweight, 350 gr full metal jacket round can have a velocity as low as 941 ft·lb, while Double Tap’s specialty ballistic rounds can push the limits of 3,032 ft·lb.

In some locations, the ammo is referred to as its metric measurement, 12.7x41mmSR, where the SR stands for semi-rimmed.

Unveiled at the 2003 Orlando SHOT Show, the .500 S&W Mag resulted from a collaboration between gun manufacturer Smith & Wesson and ammunition maker Cor-Bon.

They wanted to created a maximum-sized ammunition that could take any and all of North America’s big game and apex predators. Designed for the brand new Smith & Wesson X-frame, the Model 500 revolver, the companies wanted more than to lay claim to the biggest revolver caliber – they wanted to put a large space between this caliber and its next competitor.

Loosely based on the .500 Maximum, also known as the Linebaugh Long, Cor-Bon had to take special care to not exceed a bullet diameter of .500 inch while creating this large Magnum round. According to the National Firearms Act, bullet diameter can not exceed one-half inch or it’s considered a destructive device.

After the positive reception of the .500 S&W, Cor-Bon set out to make the revolver round more manageable. In 2004, a year after the release of the .500 S&W Magnum, Cor-Bon debuted the .500 S&W Special. A shorter version of the Magnum, the .500 Special has a significantly reduced power load and features a 350 gr projectile that reaches an average velocity of 1,250 fps.

When Smith & Wesson and Cor-Bon set out to make the .500 Magnum, they wanted a cartridge that could harvest all of North America’s game. The cartridge they ended up with is more effective and has proven itself capable of taking any of the large game in the U.S. and more – it’s capable of harvesting any large game on the planet, including African game animals.

The round has both a high recoil energy and velocity. Muzzle energies of the .500 Mag can exceed 3,000 foot pounds, which is double the energy of the venerable .44 Magnum. To make it easier to handle, the revolvers made for this big bore cartridge often feature compensators to help reduce the felt recoil and energy.

Because of its weight and massive ballistic power, this big bore round isn’t recommended for novice shooters or those new to handgun hunting. And while the firearms chambered for the .500 S&W Magnum are great as survival handguns (it can even take down grizzlies and polar bears), they’re not effective as self-defense firearms or concealed carry weapons.

Manufacturers of the .500 S&W Magnum cartridge offer a plethora of bullet choices for the shooter. These options run the gamut from standard soft point to the LEVERevolution bullet made by Hornady.

Some of the most common variations shooters find include:

The .500 S&W Magnum half-inch bullet weighs between 265 gr at the low end and can reach highs of 700 gr for special hard-cast bullets.

Both Grizzly Cartridge Company and Winchester offer low-recoil .500 S&W Mag loads. Although these low-recoil rounds are significantly easier to shoot than full factory cartridges, even a 350 gr .500 S&W Mag bullet can reach a velocity of 1,400 fps. Although this ammo has only one-third of the powder that a full load carries, these rounds still have nearly twice the recoil of the .44 Mag.

Sporting Arms and Ammunitions Manufacturers’ Institute (SAAMI) regulations state the cartridge’s max pressure at 60,000 psi, but many factory rounds are loaded to only 50,000 psi. This allows for both easier shooting and easier case extraction, which can be difficult with the force that the projectile leaves the firearm.

For those planning on big game hunting, it’s recommended to use a heavier bullet and not going below 500 gr. This is especially true if hunting in Africa. When hunting medium game, a bullet weight from 275 through 325 gr is efficient without destroying the animal in question.

Many modern-day ammunition companies make at least one variation of the .500 S&W Mag cartridge, including:

Reloading equipment is available for the .500 S&W Magnum and can lower the cost of shooting the big bore round. Hand-loading also gives shooters plenty of options in ammunition strength and power, and with the right load, many shooters can find a pleasant combination of power and manageability.

At its release, the .500 S&W Mag cartridge was designed to be used with the Smith & Wesson Model 500 Revolver, which was considered the world’s most powerful handgun. And according to Smith & Wesson, it still is today.

The Model 500 is a large hunting pistol. It comes standard with an 8.38-inch barrel, an overall length of 15 inches, and a weight of 69.1 ounces. Due to the revolver’s thick cylinder (necessary to handle the force and power of the cartridge), these wheel guns are only available in five rounds.

This Smith & Wesson revolver can reach a muzzle energy of 2,600 ft·lb. Because of this force, the firearm comes with a removable high-efficiency compensator and an integrated muzzle break to make shooting and returning to target easier. It can be fired in either single or double action. When fired in single action, the gun has a light, five-pound trigger pull.

To some, the size of this stainless steel revolver may seem like overkill, but for those hunting big game, it’s a convenient option. These big bore handguns are lighter and easier to carry than a rifle large enough to take dangerous big game. This is especially true if you’re in rough territory or surrounded with brush.

Although big bore enthusiasts and handgun hunters both appreciate the Model 500, the big gun does have a double discharge effect. Because of its strong recoil and muzzle lift, shooters often overcompensate in their grip, which can lead to a second trigger pull caused by the energy created when it’s fired.

Other Firearms Chambered for the .500 S&W Cartridge

Although the S&W .500 Mag was first fired from the S&W Model 500, it’s now chambered for several revolvers and rifles in both lever action and single shot designs. The original .500 S&W cartridge, released in 2003, featured a large pistol primer, but now the ammunition uses a large rifle primer.

Big Horn Armory offers its Model 89 in multiple variations. These lever-action carbines and rifles are chambered for the .500 S&W and are made in the USA. A big game hunter’s dream, they’re capable of taking any animal on Earth and are considered the most powerful lever guns currently made.

The company also offers the AR500, an AR-style semi-automatic rifle chambered to the .500 Auto Max, a rimless round designed for magazine-fed firearms based on the .500 S&W Mag.

Other firearms chambered for the .500 S&W Magnum include:

Regardless of what weapon is chosen, the S&W .500 Magnum can be custom-fitted for just about any hunting task. If shooting hogs in Texas or hunting moose in Alaska, the .500 Smith & Wesson Magnum is a great choice.