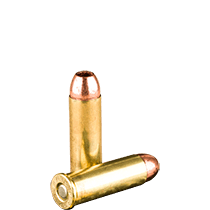 Live Inventory
Intended to be a more powerful revolver cartridge for law enforcement use, the .41 Magnum was outmoded by the high capacity 9mm pistols on the market in the 80s. Today, it is a highly respected handgun hunting caliber, both in power and accuracy. Learn More

Elmer Keith, Bill Jordan and Skeeter Skelton – three icons of the firearms industry – designed the .41 Remington Magnum cartridge and introduced it to the shooting public in April of 1964. The ammunition came with two distinct loads: one for law enforcement (those that the cartridge had originally been designed for) and one for hunting.

Along with the release of this new magnum ammunition, the Smith & Wesson Model 57 revolver, which was chambered for the .41 Remington Magnum, hit the market. Two months later, in June of 1964,  Smith & Wesson released the Model 58, a revolver chambered for the .41 Rem Mag that was specifically designed for police officers and other law enforcement.

The .41 Remington Magnum, often referred to as just the .41 Magnum, features a .410-inch bullet in a rimmed, straight-walled case (unlike the .41 Long Colt with a bullet diameter that measures .401 inch). The ammo’s case measures 1.290 inches, giving the overall cartridge a length of 1.590 inches.

A centerfire round, the .41 Mag has a large pistol primer that can reach a maximum pressure of 35,000 pounds per square inch (psi).

Development of the .41 Remington Magnum

In the mid-20th century, Magnums ruled the ammunition world. The .357 Magnum had enhanced the .38 Special and the .44 Magnum enhanced the .44 S&W Special, offering wheel gun fans a cartridge that could compete with the .45 ACP ammo.

Yet when it came to actual implementation in the real world, there was a void. Many law enforcement agencies were using .357 Magnum semi-wadcutter and wadcutter bullets in their duty weapons. While these firearms had better ballistic performance than the .38 Special, officers wanted something with more power. Some tried to opt for the .44 Magnum, but with its heavy recoil and muzzle blast, it was not effective for rapid fire situations.

This need led Keith, Jordan, and Skelton to petition for a round that could stand in the middle of the two established Magnum rounds. There was a need, they said, for an accurate and reliable cartridge that was more powerful than the .357 Mag, but easier to handle than the .44 Mag. They felt a .41 would be the perfect caliber.

In its original design, the round was not the .41 Remington Magnum, but the .41 Police Special. Keith designed it easier to handle, with less blast and bang than the .41 Mag ammo for sale today. It featured a 200 grain (gr) semi-wadcutter bullet that reached a velocity of around 900 feet per second (fps).

Keith also wanted to see a hotter round. He proposed a 210 gr jacketed hollow point (JHP) bullet that could reach velocities between 1,300 to 1,400 fps.

But, alas, Magnum was the trend of the day and Remington decided to take the round to a higher level and turn it into a Magnum. The company increased the standard bullet size by adding 10 gr, upping the velocity of the cartridge to 1,150 fps. The load was hot and it had a recoil that showed it.

The lighter .41 Special never saw the light of day as a factory load. Instead, it became a wildcat load and can be seen among handloaders even today.

Although it was specifically designed with law enforcement in mind, the .41 Rem Mag never caught on in the police crowd. There are multiple reasons for its lack of popularity. Foremost, the ammunition was loaded as a Magnum, making handability difficult for those with limited experience. With a heavy recoil and muzzle blast, shooters needed extensive practice to effectively shoot the weapon and return to target in a timely manner.

Second, the Smith & Wesson Model 57 and Model 58, the revolver designed for the .41 Rem Mag, came on a heavy N Frame. There were little differences in size and weight between guns chambered for the .41 Mag and the .44 Mag, and many of them were large, heavy, and clunky. They were next to impossible to conceal and weren’t easy to carry.

Lastly, the need for the .41 Rem Mag came at a time before hollow point ammunition was readily used and available. Shortly after the cartridge’s release, just as it started to gain popularity in law enforcement circles, ballistic technology boomed. Suddenly an ammunition’s ability to travel fast and hit hard could be improved upon without lengthening the size of the bullet. Where the .357 Magnums failed in stopping power before, they could now excell with the advances in ammunition technology.

The .41 Mag as a Hunting Cartridge

Where the .41 Mag did succeed, was with handgun hunters. Compared to the .44 Magnum, the .41 Magnum offers a more practical hunting pistol. With flatter shots, less recoil, and a variety of load configurations, the .41 Mag has equal or better muzzle velocity and muzzle energy than its bigger cousin. While still powerful, the .41 Magnum is appropriate to hunt small game that the .44 Mag blows to pieces.

In the United States, the .41 Magnum is used to hunt a variety of animals, from small game to white tail deer. It’s even used by some to harvest small bear. When comparing its hunting performance to that of the .357 Mag, hunters see a world of difference. The .357 isn’t reliable to take down any big game, where the .41 Remington Magnum can handle anything from varmit to medium-sized game, especially with modern hollow point bullets.

Although some suggest the .44 Mag makes a better hunting cartridge, that’s not always the case. The .44 Magnum is too big for most small game, and because of its power and the size of the firearms needed to shoot it, it’s often too much for some hunters – especially women, seniors, and those with small frames.

Even though it’s easier to handle than the .44 Mag, the .41 Remington Magnum still has a heavy recoil and blast. And the average shooter, or any of those new to handgun hunting, need practice to effectively hunt with a firearm chambered to this caliber.

When Keith, Jordan, and Skelton petitioned for the .41 Remington Magnum, Smith & Wesson set out to create a firearm worthy of the new cartridge. The company took its large, double-action, N frame revolver and modified it for the Model 57.

The wheel gun measured nearly a foot long (11.5 inches) and weighed in at a hefty 48 ounces. The six shooter came in a variety of sizes, including a four, six, six and one-half, and eight and three-eighths inch barrels. Even though it was designed for law enforcement, the civilian pistol came as a target gun, with a target trigger, hammer, and sights.

Although it’s similar in size and shape as the Smith & Wesson Model 29 – the .44 Magnum that was made famous by Dirty Harry – the Model 57 has about one-third less recoil and a flatter bullet trajectory, making it a better performer at long range shooting. The revolver delivers a hefty punch and statistics estimate that a .41 Mag bullet from a Smith & Wesson Model 57 provides a one-shot-stop 70 to 80 percent of the time.

Although the Model 57 was considered the second most powerful wheel gun for decades, it (along with the subsequent Model 58) never reached the popularity they deserved. Even though it’s considered by many big bore enthisastists as the most underappreciated of Smith & Wesson N-frames, it was deemed too big and heavy for law enforcement and was never fully embraced.

The Model 58 didn’t come close to reaching the height of the Model 57, even though they were almost identical to each other. It went on the market just a few months after the company’s first .41 Magnum revolver in 1964, and was manufactured until 1977. Even though it spanned 13 years, only about 20,000 of these guns were made.

Like other ammunition calibers, the .41 Remington Magnum is known by different names. Shooters may find the cartridge under any of the following:

At times, the round can also be found referred to as the 41 Remington Magnum or the 41 Magnum. While the meaning of this ammunition is understood in these references, they are grammatically wrong. The period in the cartridge’s name is not just a period, but a decimal point, referencing the measurement of the ammo’s bullet diameter (.41 inch). Without this decimal point, these numbers, and therefore the ammunition names, are technically wrong.

The .41 Rem Mag is a powerful cartridge and it comes in a variety of styles. Some of the most popular rounds for the ammo include:

Although the .41 Magnum isn’t one of America’s favorite cartridges, there are plenty of ammunition manufacturers who make ammunition for this round. Some of the most popular ammunition companies include Federal, Double Tap, Buffalo Bore, Cor-Bon, Winchester, and the ammunition’s orginiator, Remington.

The only findable downfall with the availability of ammunition is that there are few, if any, target or practice rounds for .41 Remington Magnums. So when breaking in a new firearm or getting used to handling a big bore .41 Mag handgun, plain old lead round nose ammo is nearly impossible to find (unless a friend handloads), and even full metal jacket (FMJ) plinking rounds are rare. This makes it hard to get cheap .41 Magnum ammo and means time at the range is going to cost more than with a 9mm or even a .357 Magnum.

While the .41 Rem Magnum was designed specifically for law enforcement, the cartridge found its home among handgun hunters. This big bore round offers a heavy bullet with high velocity that doesn’t skimp on trajectory or accuracy. Although it’s not as popular as the other Magnum cartridges, those who’ve shot it often claim to be darn near the perfect caliber.