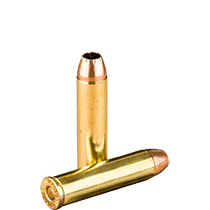 Live Inventory
Developed by Smith & Wesson for use in its X frame revolver, the .460 S&W Magnum is a very capable hunting round suitable for all North American game. Handguns chambered for the .460 S&W Mag will also shoot .454 Casull, .45 Colt, and .45 Schofield. Learn More

Designed for handgun hunters, the .460 S&W is possibly the most versatile and powerful revolver option available, not only in America, but throughout the world. This ammo is big. It’s powerful. And it’s the fastest revolver cartridge ever made.

The .460 S&W features a heavy, .452-inch diameter tipped bullet that sits in a rimmed, straight-walled case. The average bullet weighs 300 grain (gr), but factory loads can be found with bullet weights ranging from 200 gr through a massive 395 gr.

The case, which Hornady developed from the .454 Casull, measures at 1.8 inches, making the total length of the ammunition a whopping 2.3 inches. In comparison, a standard factory 9mm cartridge measures 1.169 inches in total length, which means that two 9mm rounds, laid nose to nose, would be about the same length as one .460 S&W round.

The ammunition features a large rifle primer and the maximum pressure is 65,000 pounds per square inch (psi), set by Sporting Arms and Ammunitions Manufacturers’ Institute (SAAMI). This high pressure chamber is equivalent to the pressure of Magnum rifle cartridges, and it packs quite a punch.

Combine this bullet weight with the ammo’s high pressure, and the shooter gets a maximum velocity that’s unprecedented in the handgun world. Smith & Wesson claims the bullet can even reach up to 2,409 feet per second (fps) in the right conditions.

But all this power and force comes at a price – the .460 S&W has a heavy recoil that can, with a 300 gr bullet, be three times stronger than the .44 Magnum. This power and speed flattens the projectile’s trajectory and helps to increase its energy, all while giving the ammo the accuracy and distance it needs as a hunting round for big game.

The .460 Smith & Wesson Magnum was released in 2005, after Hornady and Smith & Wesson collaborated on its development. This joint effort was created for the Smith & Wesson Model 460 Extreme Velocity Revolver, a wheel gun specifically designed for long-range, big game hunting.

Hornady started with the .454 Casull as a parent case, substantially lengthened it and added more power and pressure. Because the .454 is actually a Magnum (as its parent casing was the .45 Colt), it makes the .460 S&W a Super Magnum, or a Magnum of a Magnum.

The ammunition manufacturer used a tipped bullet in the extra long casing, making the .460 S&W the first commercial revolver ammunition to use such a design. Technically a polymer-tipped hollow point, the bullet shape improves the overall ballistics of the round, as well as its take-down power.

These ballistic tips give the .460 S&W a more stable flight pattern, improving the overall accuracy of the round. What’s more, upon impact, the polymer tip pushes into the bullet’s center, leading to rapid and uniform expansion. With this power and trajectory, this round has MOA (minute of angle) accuracy at 100 yards, where standard is an inch of inaccuracy.

When Smith & Wesson joined forces with Hornady for the .460 S&W, many were surprised. Only two years beforehand, the firearm company had released its powerful .500 S&W cartridge. But that didn’t phase the company, nor handgun hunters, who soon recognized the differences between the two big bore rounds and found room in their gun cabinets for the newest Smith & Wesson revolver and ammunition.

Smith & Wesson released the Model 460 XVR just two years after it released the .500 S&W chambered revolver. Both designed on the company’s extra-large X frame, these wheel guns are designed for long-distance handgun hunting of large game.

While these revolvers are two of the largest bore revolvers in the world, they do have some differences. Of course, the .460 S&W features a smaller projectile, but it also has a recoil much less than the .500, although its muzzle energy is only about 10 percent lower.

In general, the .460 has shown to be more popular among American hunters. It’s easier to handle and to shoot, and features significantly more versatility in ammunition choices. Because of its ability to shoot a multitude of cartridges and the fact that shooters can find cheap .460 S&W ammo for less than the .500, it’s by far the favorite among most big bore enthusiasts.

The .460 S&W Magnum cartridge is available in many different configurations and from multiple ammunition manufacturing companies.

In most cases, shooters can find ammunition in jacketed hollow points (JHP), soft point (SP), or ballistic tipped rounds in the .460 S&W. JHP ammo features a lead bullet that’s jacketed in a harder metal, most often copper. The bullet has a hollow point that reaches to the middle of the projectile. When the bullet impacts its target, it has greater expansion and slower penetration. This combination gives the bullet more stopping power and lowers the chance of over-penetration, a definite risk with a bullet that travels so quick.

These hollow points can be topped with a polymer tip, turning them into ballistic ammunition. This increases their effectiveness, especially when hunting and taking shots at 100-plus yards.

When looking for cheap .460 S&W ammo, consider SP ammo. These rounds have a lead bullet that’s not jacketed and they tend to be more affordable than their JHP and ballistic counterparts, making it great for bulk .460 ammo for plinking and target shooting.

Although there’s plenty of factory rounds available, many shooters opt to handload their own .460 S&W ammo. This not only makes shooting less expensive, but allows shooters to customize their rounds to their specific preferences. Reloading components for this big bore cartridge are available through Hornady and Starline.

Like many other firearms made for Magnum cartridges, most .460 S&W chambered revolvers can house and fire more styles of ammunition than the firearm is chambered for. As its parent casing is the .454 Casull, it can of course fire it without issue, and actually makes shooting this big bore round enjoyable.

The .460 can also fire .45 Long Colt and .45 Schofield cartridges, as they all use the same diameter of straight-walled, rimmed shells. For those who are fans of the more obscure, pre-.45 Colt revolvers, many of these handloaded rounds can also be fired from the .460 S&W.

Please note that although most can, not all guns made to shoot the .460 S&W can fire alternative ammunition cartridges. This is especially true of carbines made for big bore revolver rounds. With any firearm, always check with the manufacturer before firing anything but standard ammunition out of the gun.

Because of its ability to shoot multiple cartridges, the .460 S&W moves from a heavy handgun with a big bullet to one that’s much more versatile than many realize, especially at first glance. With .460 S&W ammo, shooters get a long-range hunting round that’s perfect for North America’s biggest game. This firearm is also appropriate for medium-size game at a distance and is known to take down white tailed deer at lengths of 150 yards or more without issue.

Revolvers made for the .460 are also great for defense, particularly when it comes to self protection against apex predators, including grizzly bears.

But shooters can tone these firearms down with a .454 Casull or .45 Colt round. These smaller ammunitions make the weapon much more manageable and allow more shooters accessible range use or backyard plinking. In most cases, when shooting a .45 Colt out of a revolver chambered for the .460 S&W, it handles extremely similar to shooting a standard .380 ACP or a light 9mm round.

The ability to go from what Smith & Wesson claims is the highest velocity revolver in the world to having the reduced perceived recoil and muzzle blast of a .380, is more than versatile, it’s pretty amazing.

Firearms Chambered for the .460 S&W

When Hornady released the .460 S&W in 2005, Smith & Wesson released its Model 460XVR which stands for Extreme Velocity Revolver. This large wheel gun features the world’s fastest muzzle velocity and is accurate beyond 200 yards. To some, it’s the best idea that Smith & Wesson ever had.

The revolver provides shooters with interchangeable compensators, which allow them to effectively handle different loads with optimal performance.

The 460XVR features a five-shot cylinder and, in its standard form, just over an eight-inch barrel, making the whole gun reach an overall length of 15 inches. The Model 460XVR is also available in five-inch and 12-inch barrels. Shooters can opt to use single or double action firing.

But there’s more available out there for the .460 S&W round than just the Model 460XVR. Here are some of the favorites:

The .460 S&W Magnum sends a heavy bullet at high speed rather far, giving it the necessary power for hunting large or dangerous game animals anywhere in the world. This cartridge is accurate, and when matched with the correct firearm, can shoot groups smaller than one inch at 100 yards.

The ballistic performance numbers for this cartridge are impressive – muzzle velocities alone range between 1,500 and 2,300 fps for bullets weighing from 200 to 395 gr. Velocities like these for such heavy bullets result in muzzle energies between 2,000 and 2,350 ft·lb force.

The effective range of the pistol hunter reaches unprecedented distances with this revolver cartridge. This, combined with excellent accuracy and a wide variety of bullet designs and loads for the caliber, are why the .460 S&W Magnum will remain a popular choice for years to come.