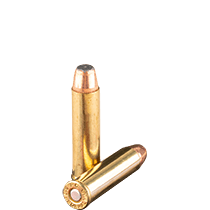 Live Inventory
The .327 Magnum was designed to get .357 Magnum performance from a small revolver, without losing the ability to load six rounds (instead of five). This cartridge lives up to the expectations, and does so with less muzzle blast and recoil than any comparable .357 Mag available. Learn More

In 2008, Federal Premium Ammunition collaborated with Sturm, Ruger & Company to develop the .327 Federal Magnum, making it a relative newcomer to the firearms world. The companies’ joint goal was to improve on the .32 H&R Magnum, which was never loaded in a factory round to its full capacity.

The .327 cartridge features a .312-inch diameter lead bullet that sits in a straight-walled, rimmed casing that measures 1.20 inch – one-eighth inch longer than the .32 H&R Magnum case (the parent casing on which it is based). Together the cartridge measures 1.47 inches in total length.

Muzzle velocities for the 85 or 100 grain (gr) bullets, which are most commonly loaded in this cartridge, can reach a velocity of up to 1,500 feet per second (fps). Muzzle energies, as a result, can be as much as 500 foot pounds (ft·lb). The energy levels of the .327 Federal Magnum exceed any commercially available .38 Special and most 9mm ammo. The .327 Federal Magnum can even meet the same energy levels as many .357 Magnum loads.

When it comes to pressure, according to the Sporting Arms and Ammunition Manufacturers’ Institute (SAAMI) standard, the .327 Fed Mag has the highest pressure of any other commercial self-defense round at 45,000 pounds per square inch (psi). Compare this to other Magnum cartridges like the .357 Magnum, which has a max pressure of 35,000 psi, and the .44 Magnum with a max pressure of 36,000 psi, and it’s easy to see the difference in pressure.

These features led to an ammunition that accomplished exactly what its designers set out to do, create a round that far exceeds its parent in both power and performance.

Development of the .327 Magnum Ammo

The .32 caliber may not be that popular in today’s age, but it’s been influencing gun and ammunition development for nearly a century and a half. In 1878, Union Metallic Cartridge (UMC) released what would become known as the .32 S&W short. This low pressure round was designed for small pocket revolvers that were meant to be used in point blank scenarios, and the ammunition shared a similar performance with other small calibers like the .25 ACP, .32 ACP, .22 Short, .22 Long, and .22 Long Rifle (LR).

By the turn of the 20th century, Smith & Wesson released the .32 Long, a cartridge that housed the same .312-inch bullet as the .32 S&W short, but in a larger case. This new ammunition saw an improvement in performance with a 10 percent increase in energy.

The .32 Long faded with the development of the .38 Special and, later, the .357 Magnum. These revolver cartridges were the go-to rounds for duty and defense for much of the 1900s, and were seen in police holsters and civilian bed stands across America.

Then, in 1984, Harrington & Richardson, a subsidy of Remington, joined with Federal Premium Ammunition to create a more powerful .32 revolver cartridge. Federal loaded the new round with more powder than previous ammunitions to create a magnum round that ended with a 200 percent increase in muzzle energy when compared to the .32 Long. They called it the .32 H&R Magnum.

This new Magnum used the same size bullet as its parent, but one that was heavier. The .32 H&R Mag fit into the same class of ammunition as the .38 Special, but gave the shooter less perceived recoil and muzzle lift.

Even though the .32 H&R was a Magnum, it was by no means a hot round, and factory ammunition was never loaded to its full potential. This is primarily due to the innate weakness in H&R revolvers. While the handguns were well made, their top break design and six-shot cylinder made them unable to handle a significant amount of pressure and the ammo could, therefore, never outperform the .38 Special.

When it came to shooting the .32 Magnum out of other revolvers, such as those manufactured by Ruger and Smith & Wesson, it didn’t take long for handloaders to start enhancing the ammo and its performance at the range and in the field.

Fast forward to 2007, and Federal again wanted to take the .32 caliber to the next level. This time Federal paired with Sturm, Ruger, & Company to make a more powerful .32 ammunition specifically for the snubnosed Ruger SP101.

In 2008, the .327 Federal Magnum ammo was released. Technically a Super Magnum, the .327 is a Magnum cartridge and, thanks to modern ballistic technology, handles more pressure than any other self-defense round on the market. SAAMI sets the max pressure for .327 ammunition at 45,000 psi – double the standard for the .32 H&R Mag and 28 percent higher than even the .357 Magnum.

So what’s all this pressure mean? It means that the projectile coming out the end of the barrel has more power. More power equals the ability to propel a heavier bullet at higher velocities. In the end, the shooter is left with one of the most powerful cartridges made for handguns.

Firearms Chambered for the .327 Federal Mag

The first firearm made for .327 Federal Magnum ammo was the Ruger SP101, a six-shot, snubnose wheel gun with a three-inch barrel. This little beast could shoot a 100 grain bullet at a velocity of 1,400 fps, making it powerful and deadly.

When the .327 version of the SP101 hit the market, many thought the revolver was designed for women and seniors – an “easy-to-handle” round that didn’t hit hard, much like the .32 H&R. But they were wrong.

While the muzzle lift and recoil are muted, it’s still a big bang coming out of a little gun. Without ear protection, the .327 Mag is deafening and the muzzle flash blinding, especially if shooting at night.

Beyond the SP101, most of the firearms found chambered for the .327 Federal Magnum are revolvers. Manufacturers that have produced revolvers for the .327 Mag include Charter Arms, Taurus, and Smith & Wesson, although Ruger is the only one that is currently manufacturing revolvers in the round. Among these wheel guns, shooters can find many varieties with capacity for six to eight shots.

While revolvers are currently the primary firearm chambered for the .327 Federal Magnum, gun enthusiasts have noted how well it would serve for small- to medium-sized game in a lever action rifle – and Henry, the U.S. carbine and rifle company, listened. Henry offers three different varieties of its Big Boy Rifles in .327 Federal Mag: its Big Boy Classic, Big Boy Carbine, and Big Boy Steel.

The Versatility of .327 Magnum Ammo

Since there are so many .32 caliber rounds and the .327 is so powerful, Federal lengthened the case, ensuring the ammunition couldn’t be loaded into revolvers designed for lower-pressured ammo. Although the .327 Fed Mag can only be loaded into guns chambered for it, those guns can hold a surprising variety of ammunition cartridges.

While many revolvers can shoot smaller calibers – such as a .357 Revolver handling .38 Special cartridges – the .327 Fed Mag takes it a step further. Revolvers chambered to the .327 can fire four other rounds:

It should be noted that the Henry rifles and carbines chambered to the Federal Magnum can only shoot the .327 and .32 H&R Magnum. The smaller .32 cartridges will not fire from these long guns.

While the standard .327 load features a 100 gr bullet, Federal also makes a lighter load in the cartridge. The recoil of the ammo lessens with an 85 gr bullet, but much of its power remains, still propelled with more power than any factory load available in the .32 H&R.

When it comes to the more powerful end of the .327, shooters lean toward Speer Gold Dot. These self-defense rounds weigh between 110 to 115 gr and reach performance levels of the .357 Mag. Testing shows that these bullets can penetrate 10 percent ballistic gel up to 14 inches with a wide expansion.

Federal, of course, still makes the ammunition, as does Cor-Bon, Speer, and American Eagle. Shooters can find the round in a variety of styles, including:

When it comes to caliber comparisons, the .327 Federal Magnum is often compared to the .357 Magnum. Because the ballistic performance of these rounds are similar, many shooters say the .327 offers some distinct advantages to the larger round.

The .327 Magnum is also a smaller cartridge, which allows for more carrying capacity. Most snubnosed .327 Fed Mag chambered revolvers offer a six-shot cylinder, where .357 revolvers of the same size can only hold five rounds, 16.67 percent less than the .327.

Other Names for the .327 Federal Magnum

Although it hasn’t been on the market for long, .327 Federal Magnum ammunition is already known by many names. Shooters may see any of the following listed on a box of ammunition:

Sometimes, the cartridge gets written as 327 Fed Mag or 327 ammo, without the decimal point before the number. While the meaning is still conveyed when the ammo is written this way, it’s grammatically wrong.

The .327 Federal Mag was the winner of the Golden Bullseye Award for Ammo of the Year in 2009, and the cartridge continues to be greeted with great enthusiasm by the firearms community. With its low recoil and high capacity, the .327 Federal Magnum is earning its place among respected self-protection cartridges and their carriers from coast to coast.