Pittman-Robertson Act: How Guns and Ammo have been Saving the Environment for Nearly 100 Years 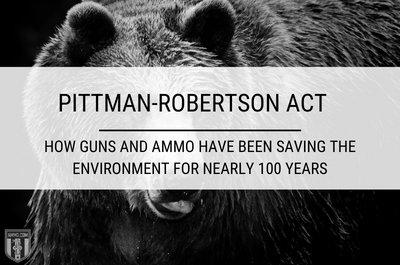 It’s unusual to think that Second Amendment proponents and members of the freedom movement would celebrate the day that a tax took effect.

But that’s precisely what the Pittman-Robertson Act is – a tax often celebrated by gun enthusiasts, patriots, hunters, and pro-freedom elements in the United States.

Its story is one of the more fascinating in the history of American legislation.

First, it’s worth noting that the Pittman-Robertson Act, known officially as the Federal Aid in Wildlife Restoration Act of 1937, does not establish a new tax. Instead, it commandeered an existing 11-percent excise tax on rifles, shotguns, and ammunition and a 10-percent tax on pistols.

Rather than going into the general fund of the United States Treasury, the Pittman-Robertson Act earmarked this money for the Department of the Interior and its wildlife preservation efforts. The money is then distributed to the states and can be spent how they see fit.

This was a coup for the Second Amendment and liberty movements. Rather than the money going toward a federal government interested in stripping them of their rights, it went to the Department of the Interior, with an interest in keeping the American wilderness wild at heart. With this bill, hunters and firearms enthusiasts continued their role as the unsung heroes of the American conservation movement.

In fact, Federal Ammunition was instrumental in getting the bill made into law.

Where Does This Tax Money Go?

The money raised by this tax isn’t just a blank check to the state governments. There are strict requirements on how it must be spent.

What’s more, the Act also demands that the state governments not use any of the money they raise from selling hunting licenses outside of the state game and wildlife departments. The Secretary of the Interior must approve all plans for apportionment of the money – acceptable uses include surveys, land acquisition and leasing, and wildlife and habitats management.

States must pay for the costs upfront and seek up to 75 percent reimbursement after the fact.

Generally speaking, the remaining 25 percent comes from selling hunting and fishing licenses. Any money not spent within two years goes into funding for the Migratory Birds Conservation Act.

Funding from this tax makes projects possible that otherwise would not be affordable. So it’s in the state’s best interest to have an increasing number of hunters and anglers.

The United States Fish and Wildlife Service stated that in 2010, over $2 billion was generated from this tax, meaning that state costs were reduced to $500 million.

Habitat acquisition shows some of the most stunning results of the Act. Animals such as American black bears, cougars, and elk have been able to expand their range.

White-tailed deer and many different galliform birds have been able to recover their numbers because of habitat acquisition as a result of the Pittman-Robertson Act funding. There is also a sort of self-perpetuating aspect of the Act.

Because the habitats of game animals are expanded, there are more hunting opportunities. This, in turn, means that more money is spent on items that are taxed for the purpose of funding this Act.

Secondary effects include greater eco-tourism in the areas, which means there are more jobs for Americans in sustainable and, dare we say, “green” industries, such as hiking, camping, and birdwatching.

The problem is that very little of the billions of dollars from import tariffs on products associated with these activities, such as sleeping bags, hiking backpacks, tents, binoculars, and camera equipment, actually, go to support wildlife conservation.

The Act also funds hunter education and the construction of public target ranges. However, a substantial decrease in the number of hunters over the last 50 years has left many wondering who will pay for the needed efforts of managing the land and wildlife for future generations.

Chris DePerno, a professor of Fisheries, Wildlife, and Conservation Biology at NC State University, believes “Hunters do more to help wildlife than any other group in America” by volunteering their time, donating to wildlife conservation groups, and buying hunting equipment.

DePerno claims that state wildlife agencies and programs are funded mainly by hunters, not taxpayers, as many believe.

However, according to one study, recreational firearm owners, who don’t hunt, are attributed with “74.2% of all taxable firearm and ammunition retail sales.”

This means non-hunting gun owners are the ones to thank for most of the money generated by the Pittman-Robertson Act. Hunters and gun owners are often painted as blood-thirsty bad guys by uniformed environmentalists, while environmentalists are portrayed as human-hating tree huggers. Instead of useless bickering, we should work together to find a solution.

Why so many people from both sides stand behind this Act is because the money raised by the Pittman-Robertson Act is one of the areas you’re least likely to find sweetheart deals and boondoggles.

The money spent on capital improvements due to the act must be spent on property controlled (but not necessarily owned) by the state in question.

Grants can be provided by the state to independent third parties, but the way this money is disbursed is tightly controlled, meaning that it’s very difficult to obtain and, thus, not an easy target for crony capitalists.

What’s more, the money is not just distributed willy-nilly to every state on an equal basis. Instead, it’s apportioned on the basis of how many active hunters and fishermen there are in the state in question. This ensures that the money raised by the tax goes, at least somewhat, back in proportion to the states from which it is raised.

Pittman-Robertson by the Numbers

Different studies show different numbers, but all of the figures are impressive:

Despite being little known outside of hardcore hunters, the Act raises more money for conservation and restoration than a number of well-known charities dedicated to the same purpose.

It’s not terribly surprising that most of the money raised to protect America’s natural resources and wildlife is done so by the very people who spend the most time in it.

The “user-play, user-pay” system of funding for wildlife conservation has successfully restored game animal populations around the world, some of which were once hunted to near extinction.

Because the Act was such a rousing success, it inspired other, similar acts.

For example, there is the Federal Aid in Sports Fish Restoration Act (popularly known as the Dingell-Johnson Act) passed in 1950, which effectively is a version of the Pittman-Robertson Act for fishing and waterway conservation and restoration.

The Wildlife and Sports Fish Restoration Programs Improvement Act was passed in 2000 by U.S. Representative Don Young of Alaska, who also sat on the National Rifle Association’s Board of Directors.

This tightened the ways that the money can be spent and included increased oversight in response to worries about the mismanagement of funds.

So remember, every time you go to buy a new weapon or ammunition, you’re helping to support American conservation through Pittman-Robertson.

Indeed, many of the wild places and the natural wildlife that you and your family treasure so much might not be there without the large sums of money raised by this Act.

It’s hard to say that there’s such a thing as a “good tax,” but if anything qualifies, it’s the excise tax created by the Pittman-Robertson Act of 1937.