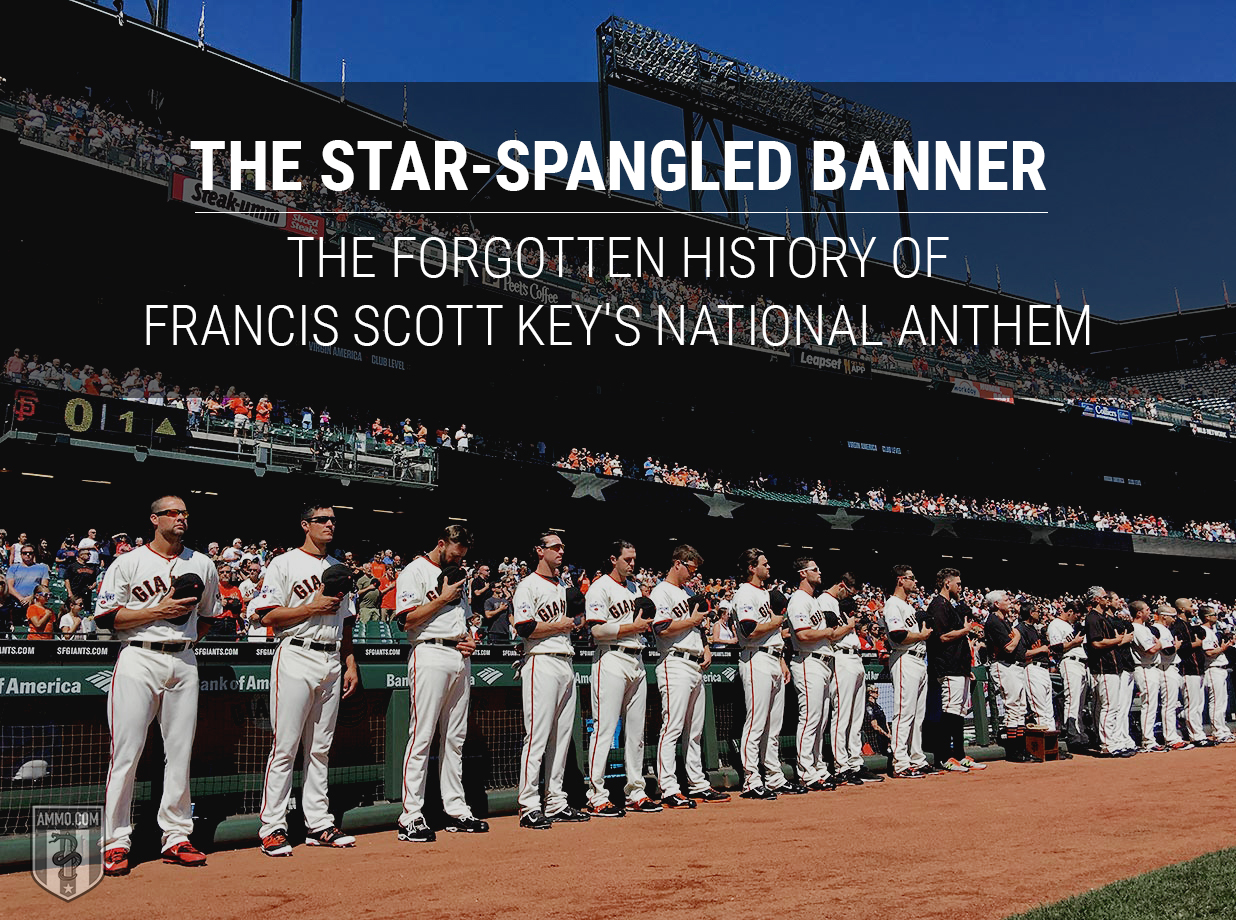 It might be impossible to sing, but everyone knows the words to the national anthem of the United States – “The Star-Spangled Banner.” It’s a staple at everything from sporting events to patriotic rallies. But while everyone knows the song, very few Americans know the story behind it, both the story of the lyrics and the story of how this ode to our nation’s flag was adopted as our national anthem. Its roots lie in the War of 1812, the same war during which widespread celebrations of Independence Day began.

Composer Francis Scott Key was a 35-year-old lawyer when he wrote the lyrics to the song on September 14, 1814. He called the poem “Defence of Fort M'Henry.” His inspiration was seeing the 15-star American flag of Fort McHenry lit up and triumphantly waving during the British bombardment in the Battle of Baltimore. Key was there as part of a team trying to secure the release of prisoners. In fact, Key was there to help secure the release of his good friend Dr. William Beanes, who had been captured by the British.

It was a bit of an accident that Key was even there to witness the events he wrote about in his poem. He was held temporarily captive, because during the discharge of his duties, he heard plans for the impending Battle of Baltimore. Thus, the British could not safely release him until the battle was over.

After the poem was written, it was quickly published in newspapers throughout the country.

“The Star-Spangled Banner” tune was largely inspired by an old drinking song called “To Anacreon in Heaven,” though it’s hard to imagine anyone singing the song correctly while drinking. This is all thanks to Key’s brother-in-law, Joseph H. Nicholson, who read the poem and immediately thought of the song.

Francis Scott Key: Beyond the Poet

Key was a prominent lawyer in Frederick, Maryland, and in Washington, D.C. He was a strong supporter of President Andrew Jackson and helped with the prosecution of Tobias Watkins, the United States Treasury Auditor charged with misappropriating public funds. He likewise assisted the administration handling the Petticoat Affair and represented Sam Houston during his trial for the assault of fellow Congressman William Stanbery of Ohio. For his service, he was nominated as the United States Attorney for the District of Columbia, a position he held from 1833 to 1841. In the course of his duties, he prosecuted would-be Jackson assassin Richard Lawrence.

While Key was not born into a slave-owning family, he purchased his first slave in either 1800 or 1801. By 1820, he owned six. Throughout the 1830s, he manumitted seven slaves, one of whom continued to work for him for wages as the foreman of his farm. Key was deeply sympathetic to the plight of slaves and often defended them in court – so much so that he was routinely referred to in the press as “The Ni**er Lawyer.” He was a leading member of the African Colonization Society, which sought to repatriate freed blacks in Africa.

However, he also worked actively against abolition in the service of the state. He secured indictments against publishers of abolitionist literature, such as Benjamin Lundy for publication of Genius of Universal Emancipation. He failed to obtain convictions, however, and resigned his position in 1840, remaining, paradoxically a voice for repatriating slaves to Africa as well as a pole of opposition to abolition.

The National Anthem: Traditions in the Making

Throughout the 19th century, the song became popular at sporting events, setting the precedent we all know today. Fort Meade, South Dakota claims to be the “home” of “The Star-Spangled Banner,” by virtue of being the first place the song was proposed as a national anthem. Post Commander Colonel Caleb Carlton declared that the song would be played “at retreat and at the close of parade concerts.” It was in 1898, that the United States Navy adopted the song as its take on the national anthem, with Woodrow Wilson ordering that it be played at military and patriotic gatherings. In 1918, it was played during the seventh inning stretch at Game One of the World Series, starting a tradition that continues to this day.

This was not the first time the song had been played at a ball game, however. The song was played as early as 1897, on opening day in Philadelphia and with greater regularity at the Polo Grounds the following year. It was during the Second World War that the song began to be played at the beginning of every game.

John Charles Linthicum, a Congressman from Maryland, was the first lawmaker to introduce a bill to make “The Star-Spangled Banner” the official national anthem. It failed, but he tried at least six times between April 10, 1918, and April 15, 1929. In fact, the Ripley’s Believe It or Not! dated November 3, 1929, stated that the United States had no national anthem. In those days, more people, if they thought the United States had an anthem, would have been more likely to name “My Country ‘Tis Of Thee” or “Hail, Columbia.” There is a perennial movement to change the national anthem to the far more easy-to-sing “God Bless America.”

However, in 1930, the Veterans of Foreign Wars circulated a petition signed by five million, requesting that Congress adopt the song as the official national anthem of the United States. Elsie Jorss-Reilley and Grace Evelyn Boudlin sang “The Star-Spangled Banner” to the committee to demonstrate that one did not need a high-pitched voice to sing the song properly. The Committee sent the bill to the House floor for a vote, where it was passed on March 3, 1931. It was signed into law by President Herbert Hoover the next day. This includes all four stanzas of the original poem, but only the first is widely known.

Because the song is notoriously difficult to sing and even trained professionals often forget the lyrics, it is commonly pre-recorded for performances such as the opening of a baseball game.

The song has a number of popular adaptations by famous performers of the day. Whitney Houston and Jimi Hendrix have particularly noteworthy renditions, but stand in a long line of popular entertainers putting their stamp on the anthem – dating back to Puerto Rican singer and guitarist José Feliciano. His slow blues version of the song sparked controversy when performed at Game Five of the 1968 World Series in Detroit.

Starting in 2016, the song became the subject of controversy, with a number of sports celebrities kneeling or refusing to honor the song during the beginning of events. The reasons for this vary, but one thing is certain: No one has yet charged the United States with a unique crime, worthy of being singled out among the nations for having its national anthem attacked.

There is also very little flux in the popularity of the national anthem among those people at the sporting events in question. While the pampered athletic celebrities are kneeling, the people in the stands – and sometimes even at home – are standing and placing their hands over their hearts during “The Star Spangled Banner.”

So take a moment to commemorate the national anthem on its special day. It’ll take you all of five minutes to listen to the song in all its four-stanza glory. While you might have trouble hitting the high notes, there’s no doubt that it’s a rousing national anthem.