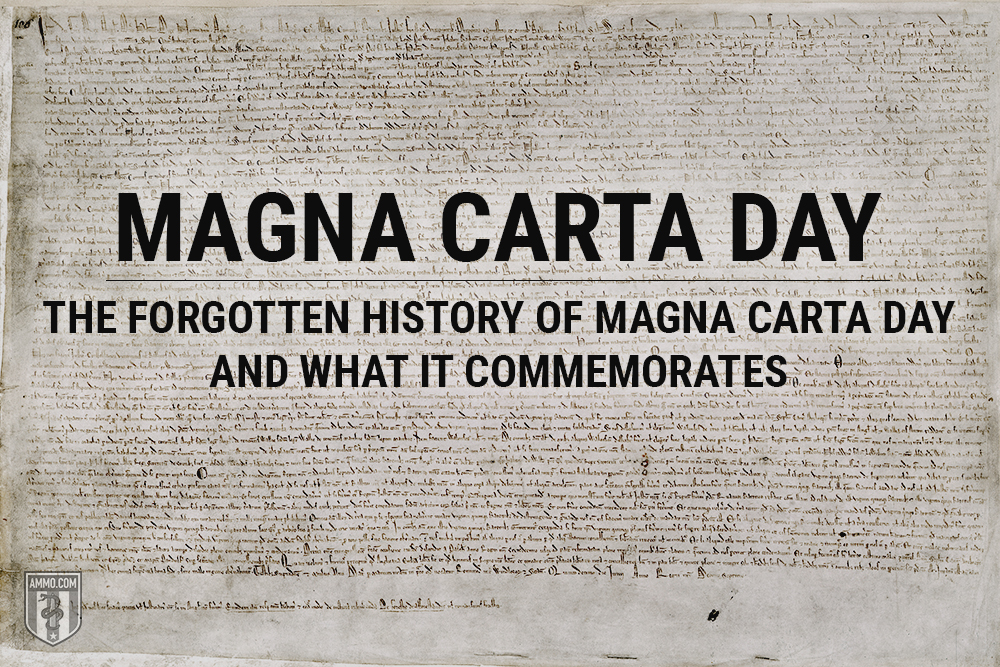 June 15th is Magna Carta Day. While this doesn’t have the same cachet as Memorial Day or the Fourth of July, the history of the Magna Carta is arguably far more important. A number of the rights codified in the Constitution’s Bill of Rights find their origins in the Magna Carta. The charter was drafted by the Archbishop of Canterbury as a way to settle tensions between the King of England and some of his barons.

The Magna Carta is the foundation of the Western conception of individual liberties, particularly in the Anglosphere. It is also one of the most mythologized documents in history. Still, many today are unaware of its actual content and the historical context in which it was drafted.

The Origins of the Magna Carta

While much of the historical context is complex, the main point is this: Under the rule of King John in the 13th century, several barons were unhappy with the nebulous nature of rule and administration. The Magna Carta was an attempt to codify the procedures by which the King ruled over his subjects, in particular the barons. The “Great Charter” was renewed by subsequent kings, though under parliamentary rule, much of its main provisions were slowly stripped away.

The dispute that led to the drafting of the Magna Carta revolved around how a king was supposed to rule. It was believed at the time that, while the king had unlimited powers, he should govern with the counsel of his barons using custom as his guide. The Magna Carta is an attempt to address what the rules are for when the king is not ruling in this fashion.

The Magna Carta’s origins are as a failed peace treaty between the king and some of his rebellious barons. King John had been steadily losing his ancestral lands on the continent to King Phillip II of France. To help wage war to maintain these lands, he levied high taxes on his barons. His barons, needless to say, did not care for this. This led to the First Barons’ War, one of the earliest civil wars in England between the king and his nobles.

The main rights established by the Magna Carta are due process of law and its corollary, the right to a fair trial by a jury of one’s peers, the latter of which is spelled out in the Magna Carta. The interpretation of what these rights mean and how they are applied has changed significantly in the nearly 1,000 years since the document was first drafted. What’s more, whenever kings would readopt the charter, they would often amend it to address the issues of the day.

For the most part, these changes are very obscure and very much a product of their times. However, there are some significant trends that are worth discussing in any history of the Magna Carta. For example, in the 16th century, under the rule of Henry VIII, the Magna Carta fell out of favor. Henry VIII mounted a massive propaganda campaign denying any right of the nobles to rebel, while also demanding full support for the Crown in all of its struggles against the papacy. On the other side of things, Catholic rebels frequently cited the Magna Carta when fighting the Crown.

By the end of the 16th century, the view had flipped almost completely. The Magna Carta was seen as the embodiment of ancient, traditional English values that had been overthrown in the Norman Conquest of 1066. The Magna Carta was seen not as a revolution in rights, but a restoration of rights that had existed since time immemorial. This is now regarded as, at best, inaccurate and, at worst, as a complete fabrication and total myth.

By the 17th century, the document became a central part of British political culture. There was increasing tension between the Parliament and the Crown with regard to the proper duties of the latter. The Magna Carta was usually cited in arguments for those who emphasized the power of Parliament when arguing against the Divine Right of Kings. The Parliament was framed as one of the ancient English institutions protected by the charter. After the 1640 revolution and the ensuing Commonwealth, many rejected the idea that the new republic was bound by an agreement made between the Crown and a nobility that no longer existed.

The Magna Carta Beyond England

The history of the Magna Carta is not limited to England and the United Kingdom – as the colonists took it with them to the New World. Many of the charters of the new colonies either explicitly took their verbiage from the Magna Carta, or else codified the principles in the charter into its New World counterparts.

This played heavily into the reasons for the American Revolution. The colonists were not fighting for a new set of rights. Rather, they were asserting the rights enumerated in the Magna Carta – rights that they, as Englishmen, believed were theirs, despite no longer living in England proper. Simply as subjects of the English and later British crowns, these rights were theirs. This is why the Bill of Rights largely restricts the government, rather than enumerating what rights the citizenry has. Rights were considered natural and pre-existing. The Constitution merely acknowledged these and restricted the government from trespassing on them.

In the 19th century, Parliament began repealing parts of the Magna Carta, despite the fact that some legal scholars believed that the Magna Carta could not be repealed. Parliament repealed provisions of the Magna Carta it believed to be obsolete or superseded by other acts of Parliament. Most of the Magna Carta was repealed by statute, with only clauses 1, 9 and 29 remaining in legal effect in England and Wales. It is frequently referenced, but carries little legal force in Britain today. It is not, contrary to popular belief, “the English Constitution” -- neither England nor the United Kingdom have an official constitution.

The clauses remaining in legal effect can be summarized as follows:

“NO Freeman shall be taken or imprisoned, or be disseised of his Freehold, or Liberties, or free Customs, or be outlawed, or exiled, or any other wise destroyed; nor will We not pass upon him, nor condemn him, but by lawful judgment of his Peers, or by the Law of the land. We will sell to no man, we will not deny or defer to any man either Justice or Right.”

While it’s easy to get agitated about “repealed” sections of the Magna Carta, it’s worth noting that a number of the sections are laughably antiquated. For example, no fewer than two clauses refer to proper use of the royal forests, which were an important economic factor in 1215, but in the 21st century are not. Portions referring to death taxes levied on barons, as well as others governing the wardship of nobles, unequal marriages, and payment of dowries and inheritances to the widows of barons were repealed in 1863. Most of the other repealed clauses have the same degree of relevance to modern day life and civil liberties.

However, Clause 29 (XXIX) is the most important and what most people are referencing when they talk about “the Magna Carta.” While the notion of these rights might have existed long prior, the Magna Carta codified them into written words to be handed down through the ages.

The simple act of guaranteeing men the right to a trial by a jury of their peers was the wellspring from which our entire Western concept of civil liberties grew – certainly something to remember and celebrate this Magna Carta Day.