The Sons of Liberty Flag: How The Rebellious Stripes Flag Shaped American Patriotism 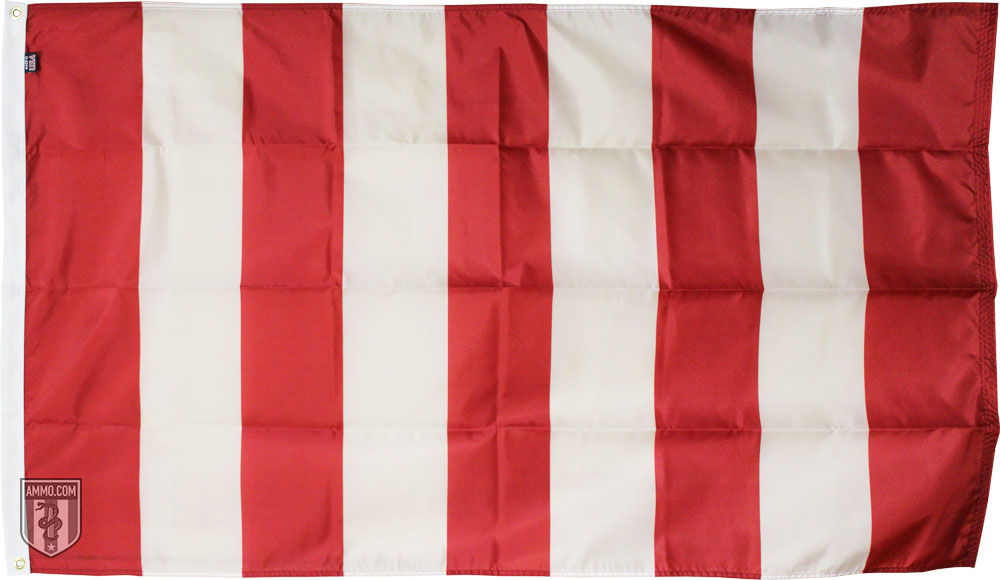 The Sons of Liberty flag is very meaningful to us, as it’s the flag that inspired the backdrop of our logo. Its origins go back to 1765, when a secretive group of patriots known as “the Loyal Nine” was formed – the group behind the original Boston Tea Party. The flag was then known as “the Rebellious Stripes” and it was banned by the British king, the highest endorsement the Crown could give.

The Sons of Liberty Symbol: The Rebellious Stripes Flag

The Sons of Liberty were perhaps the most radical group of American patriots during the pre-Revolutionary period, but the true Sons of Liberty had a relatively short lifespan. They were formed in response to the Stamp Act of 1765 and disbanded when the Act was repealed. Still, the name lived on as a popular brand name for the biggest firebrands of the American Revolution.

Many of the members of the true Sons of Liberty are American legends who need no introduction. Samuel Adams. John Hancock. Patrick Henry. Paul Revere. Even Benedict Arnold counted himself among their number. It’s unclear whether the original Sons of Liberty were a clandestine organization with an official membership or just a rallying point for anyone who opposed the Stamp Act. Ultimately, it doesn’t matter. The unified identity of opposition to the Crown was the organization, whether it was official or not.

The motto of the Sons of Liberty was a simple phrase known to virtually every American: “No taxation without representation.” While its origins are largely shrouded in mystery and lacking firm documentation, many experts agree that, to the extent that it was an organization with members, it was founded by none other than famous rabble rouser Samuel Adams.

The Sons of Liberty Flag Impacts The Stamp Act of 1765

The Stamp Act of 1765 existed for the purpose of bankrolling British troops in the New World. Colonists resisted the Stamp Act not because the taxes themselves were intolerable, but because they believed their rights as British subjects were being violated by taxation without representation.

The first branch was founded in Boston in August 1765, followed by a satellite in New York in November of the same year. December saw communication between groups in Connecticut and New York. In January of 1766, Boston and New York linked up. By March, Providence was in communication with New Hampshire, Newport, and New York. Later that year in March, groups were set up in Maryland, New Jersey, and as far south as Virginia.

The Sons of Liberty were much more than a propaganda organization. They were a militant, direct-action group in contrast to the petitioning and speeches of more moderate figures like John Adams. For example, Boston’s stamp distributor Andrew Oliver was burned in effigy before his office was burned to the ground. Boston Commissioner of Customs John Malcolm was tarred and feathered and had hot tea poured down his nose and throat. This was in keeping with the social base of the Sons: “Tavern mongers, wharf rats, and other seedy characters looking to cause trouble.”

The Sons of Liberty name was used in the pre-Revolutionary period by unrelated groups, but also in later periods of American history. For example, Copperhead group the Knights of the Golden Circle set up an offshoot called the Order of the Sons of Liberty. A radical Zionist group organized an American boycott of British films in protest of Britain’s Palestine policies under the name.

The primary activity of the Sons of Liberty was tracking British troop movements. This was important to warn colonial garrisons that troops might be coming to confiscate arms or powder from the colonists. Another common organizing activity of the Sons was to gather around a large elm tree for protests and discussion. These were known as “Liberty Trees,” where the flag was most commonly flown.

When the Stamp Act was repealed in 1766, the local Liberty Tree is where Bostonians gathered to celebrate – but it would also become home to the most rambunctious protests.

Many times, the British would cut down the tree in an attempt to stamp out the meetings of the Sons. But the Sons simply erected a pole (known as, what else, the “Liberty Pole”) in the place where the tree once stood. Local taverns, such as the Green Dragon in Boston, were another place where the seditious met to plot and plan. The liberty poles (or reproductions thereof) still dot the towns and hamlets of the East Coast, in particular the Northeast and New England. Thomas Paine eulogized the Boston Liberty Tree in a 1775 poem, and a bronze plaque sits at its former site today.

The Sons of Liberty Flag's Connection to The Boston Tea Party

The Tea Act itself is a bit convoluted, but the gist of American opposition to the Act is twofold: First, the colonists opposed the Act because it violated the principle of “No Taxation Without Representation,” a point of broad agreement even among those loyal to the British Crown. Second, the taxation scheme of the Tea Act favored British business over American business. Tea was highly symbolic of the British regime as a whole as well as this conflict.

Massachusetts stood out because it was the one colony where the protests didn’t force the return of the tea or the resignation of officials. In Boston, however, Governor Hutchinson dug in his heels and stood his ground. The Dartmouth would not be allowed to simply disembark back to Great Britain. Instead, the governor demanded that the import duty be paid.

This prompted a mass meeting of 7,000 people out of a total population of 15,000. Contrary to popular belief, the phrase, "This meeting can do nothing further to save the country,” uttered by Samuel Adams was not a signal for the Tea Party to begin. In fact, people mulled around for 15 minutes after this phrase, with Adams trying to prevent people from leaving because the meeting was not over.

Nor were the protesters who threw the tea into the harbor dressed as natives because they wanted to pass the blame onto local Indian tribes. On the contrary, it was very important to them that the British knew it was Patriots who performed the act of sabotage. Rather, the purpose of masquerading as Mohawks was to conceal their identity, but also to symbolically show that they no longer considered themselves subjects of the British Crown.

All told, the Tea Party involved between 30 and 130 men who dumped 342 tea chests into the water. Samuel Adams may or may not have planned the protest, but he certainly capitalized heavily upon it for propaganda purposes. Ultimately, the Tea Party inspired both more militant action on the part of colonists (such as the storming of Peggy Stewart) as well as stiffer crackdowns from British authorities in the form of the Intolerable Acts.

The Sons of Liberty Flag and The Rebellious Stripes Flag: All The Same

The flag of the Sons of Liberty, the Rebellious Stripes, was adopted in 1767. This flag was noteworthy for having nine vertical stripes in alternating colors – said to represent the nine states who attended the Stamp Act Congress. Contrary to popular representation, the flag was not standardized in the red and white colors of the American flag as we know it today. Red and white were commonly used, but green and white as well as yellow and white were likewise used in the flag’s design. It’s commonly confused with the 13-stripe flag used by Commodore Esek Hopkins, the Commander-in-Chief of the Continental Navy.

The deep history of this flag and its origins are the subject of some controversy, speculation and mystery. There’s a very old Sons of Liberty flag in the Massachusetts State House, donated by one John C. Fernald in 1893. The flag allegedly dates back to 1775, and was waved over Boston’s Liberty Tree in the Boston Commons. Fernald purchased the flag from the granddaughter of a man named Samuel Adams, who died in 1855 at the age of 96. The story about the flag flying on the commons was family lore, but it’s likely that the flag is not genuine. This is because it’s highly unlikely that there were mass meetings of any kind in Boston in 1775 (the city was under heavy occupation by British troops) and it’s made out of cotton cloth, which was not a common material during that era.

One possible origin of both the flag in question and the Sons of Liberty flag in particular is the British Red Ensign. This flag would have been illegal for colonists to fly, period. However, taking the flag and defacing it by cutting it up and making it into a new flag would have been an act of extreme rebellion. Indeed, many, if not most, descriptions of the flag flying at the Boston Liberty Pole more accurately describe the British Red Ensign than they do the Sons of Liberty’s flag.