The Molon Labe Flag: Come and Take Them and the Ancient History of Modern Liberty 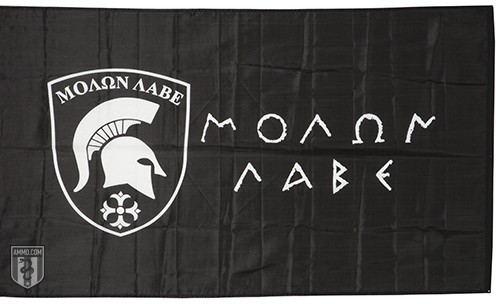 While it has deep roots in the very beginnings of the Western notion of liberty, the Molon Labe flag was likely never flown by the earliest patriots. In fact, the main reason it resonates today is for its history as a militant stance against tyrants – Persian tyrants to be exact.

What Does The Molon Labe Flag Mean?

“Molon labe” is a phrase that began during the Persian War, when the Persian Empire (then the biggest power in the world) was looking to expand from Asia into Europe. As an attempt to conquer the Greek City States, Darius of Persia sent his emissaries on a quest for a token tribute – “earth and water” – and almost all complied except one. Sparta told the Persians where to go using the laconic phrase, “dig it out for yourself.”

The stage was set for the Battle of Thermopylae, the storied battle of 300 Spartan soldiers against a massive legion of Persian troops. While the Spartans notoriously lost the battle, they effectively won the war by causing such massive casualties among the Persians that Greek independence was left secure. Herodotus’ Histories features a detailed history of this battle and the entire Persian War in Greece, but only a few parts of this story have kept the spark alive to continue the fight for liberty.

When the Persians showed up to the battlefield ordering the Spartan army to lay down their weapons, King Leonidas I had one response: “molon labe.” Translated as “come and take them,” this iconic phrase is more than a challenge for tyrants to take arms from a free people – it’s an invitation to take them “over my dead body” or to pry them from our cold, dead hands. Molon labe would later find resonance on another flag, the Gonzales Flag of the Republic of Texas.

It is said that, even when overwhelmed on the third day, the Spartan soldiers fought to the last man. Those who had swords, used them. Those who did not resorted to hands, feet and even teeth to kill as many Persian invaders as possible. The tenacity of the Spartan warriors has inspired men throughout history – not just in freedom-oriented patriot movements, but also in the world of sports and popular culture. It’s no mistake that the film 300, documenting the resistance of these brave citizen-soldiers, was such a smash success. It’s a modern-day reminder that the Spartans lost the battle, but won the war for freedom.

Stiff resistance from Spartan citizen-soldiers not only effectively broke the Persian invasion of Greece, but it also threw the Persian tyrant into a rage. So angry was Xerxes, that he had the corpse of King Leonidas I beheaded and crucified. Herodotus notes that this is in stark contrast to the Persian custom of revering valiant warriors. 40 years after the battle, the Spartans returned the bones of King Leonidas I for a proper burial.

Connection Between The Molon Labe Flag and Spartan Flag

The Battle of Thermopylae is arguably the most famous ancient battle in the modern world, which is why this flag is often referred to as the Spartan flag. And while there’s no question that the Spartans lost this battle, people are inspired to this day by the 300 brave warriors who would have rather died than submit to the despotism of Persia. The victory of the Persians was the definition of Pyrrhic, with the Spartan soldiers immediately martyred and Greek troops rallying in their memory. There was little doubt in the minds of the Spartan warriors that they were facing certain death – yet they still fought to the last man, defending Greece long enough for a naval force to be formed to oppose the Persian armada.

The Popularity of “Come and Take Them”

The Second Amendment Movement in the United States began to adopt this slogan as its own at the advent of the web, beginning to appear on websites in the 1990s. It’s not clear that the Texian forces waving “Come and Take It” on their flag knew what it meant or its origins. Outside of the Second Amendment Movement and other liberty movements, this iconic phrase has even popped up on sports jerseys.

While the Spartan notion of liberty is far different from our own (or even, for that matter, the far more liberal Athenians), patriots, constitutionalists and Second Amendment advocates continue to be inspired by the words of the Spartan king. What’s more, the Spartans are an early example of how a free people are an armed people. While the Athenians dedicated themselves to the humanities, the Spartans knew that a martial spirit and ethos was necessary for their continued independence. Lycurgus, the legendary Spartan lawgiver, once responded to those who said Sparta needed strong brick walls by saying, "A city is well-fortified which has a wall of men instead of brick."