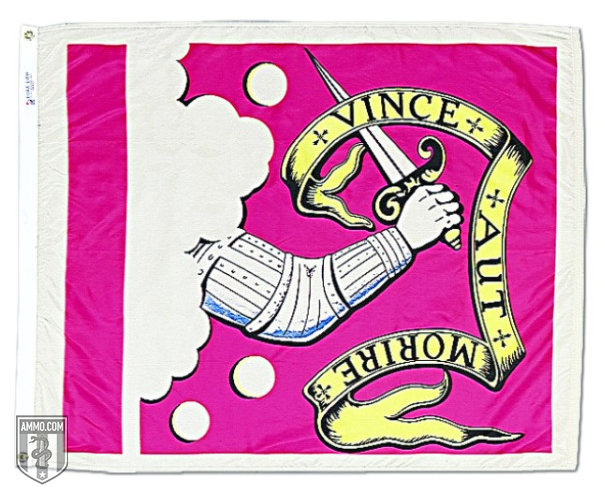 Shop Now
Dating back to the early 18th century, the Bedford Flag is America’s oldest historically attested flag. Previously, historians thought the flag dated as far back as the 1660s, but this was later proven false, as the color “Prussian blue” did not exist until 1704. It looks very much like something carried into battle by medieval knights, so historians can be forgiven for looking so far back to find an origin for this flag.

While the square shape evokes cavalry of old, the red color of the Bedford Flag makes it undeniably a cavalry flag. Its armored arm and sword harken back to the heraldic symbolism of the Massachusetts cavalry, which in turn dates back to the 1660s. The flag’s Latin motto VINCE AUT MORIRE (“Conquer or Die”) is strikingly similar to the motto of several Scottish and Irish clans, and the “Victory or Death” battle cry popular among the revolutionaries.

Although its role in the American Revolution and the Revolutionary War is not completely certain, there is evidence to believe the flag was flown at the Battle of Concord through the diaries of Minuteman Nathaniel Page who participated in the battle.

Bedford Flag History and the Minutemen

Cornet Nathaniel Page claimed the flag was given to his father in 1737. John Page was the Cornett of the Troop of Horse, a cavalry officer who held the responsibility of bearing the militia’s flag. Town of Bedford and Billerica records indicate that in addition to his father, Page’s uncle and grandfather were also listed as Cornetts for local Massachusetts Bay militias. Nathaniel, much like the other men in his family, was also responsible for the local battle flag.

So it makes sense that when Nathaniel Page left his home in Bedford on April 19, 1775, after being warned of British troops en route, that he would have brought the flag of his militia with him and that it would have flown during the fight that occurred that morning. What’s more, historians agree that Page was present for the Battle of Concord.

The Lexington and Corcord Flag at the Battle of Concord

The Battle of Concord took place almost immediately after the Battle of Lexington, hence why they are often collapsed into “Lexington-Concord.” After the British regulars won a brief skirmish at Lexington, they continued marching on toward Concord to capture materiel. The gathering American militias, who had been warned of the redcoats arrival, traveled from the west and congregated on the other side of the North Bridge about one mile from the village.

Upon seeing smoke rising from Concord, the American cavalry troops moved closer to the village, concerned the British were going to burn it. Not wanting to engage, the British forces retreated to the North Bridge.

The colonial fighters led by James Barrett, the Colonel of the Concord Militia, were told to load their weapons, but not to fire unless fired upon. They did, of course, fire upon the orders of John Buttrick who yelled, “Fire, for God’s sake, fellow soldiers, fire!” after British troops shot two Bedford Minutemen. Aiming over one another’s head and shooting over their neighbors’ shoulders, the American rebels fired against the King’s troops for the first time. The battle soon left the redcoats outnumbered and outmaneuvered. They fled, leaving behind their dead and wounded.

Once the battle of Concord was over, the flag traveled home with Page, where it was returned to the mantle. Then the Bedford Flag is never mentioned – anywhere – until 1875, when Page’s grandson, Cryus, sent the flag to Concord for the centennial celebration of the battle. Shortly after, Cryus related Nathaniel’s story to the historian Abram English Brown, and before he died, Cryus donated the flag to the Bedford Library.

Other than the Page family tales, there is no documented evidence of the Bedford flag flying during the Battle of Concord – no diaries, memoirs, or testimonies from either the colonial or British forces. Yet its story rings true. For one, many of the flags, standards and banners carried in the early days of the Revolution were not “official” flags, but rather were what the men had lying around or were special flags designed for the purpose of the company – for example, the Culpeper Flag or the Commodore Perry Flag.

Over time, the Bedford Flag has come to symbolize the militias’ resistance at Concord, as well as the early Revolution, when a group of barely trained men fought back against the world’s most powerful army and started a war for independence and freedom. It stands for fighting for liberty, no matter the cost. It also reflects the Anglo-Saxon and Celtic roots of those men fighting the British, who considered themselves at first to be British subjects fighting the injustice of violated liberty.

The original Bedford Flag, which can be seen at the Bedford Free Public Library in Bedford, Massachusetts, still exists. Spectroscopic studies estimate the flag was made in the early 18th century, but after 1704 (due to the Prussian Blue pigment used in the paint). Its silk damask has lost its shine and the painted-on image is not as clear as it must have been at the dawning of the Revolution. The silver fringe is also missing and, legend has it, was foolheartedly taken by Nathaniel’s youngest sister, Ruhamah, to be used as a dress enhancement for a military ball. What I wouldn't give to be a fly on the wall that day. More and more people are flaunting the Bedford Flag in their own way though.

If you’re ever near Bedford, stop into the library and ask to see the flag. You won't find it on a flagpole anywhere. It’s kept in a climate-controlled room for preservation purposes and, although free to see, is kept locked for the flag’s safety. While it might not be as sharp and vibrant as it was on the day that it was carried into battle, rarely will you get a better opportunity to see something standing at the crossroads of American history, with one foot firmly in the British roots of the nation and another firmly in the territory of the new nation being born.