Navy Jack Flag: History of the First Navy Jack and The Ultimate Symbol of Freedom 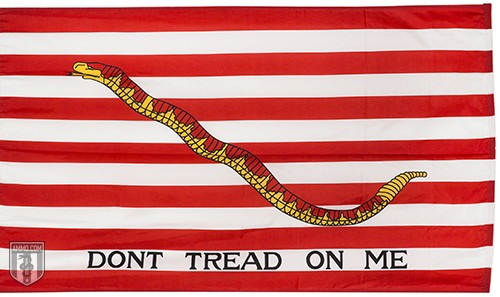 Shop Now
Among pre-Constitutional American flags is the First Navy Jack – the current national maritime flag and an official symbol of the United States government to this day. But it’s not just the “first” Navy Jack – it’s also the current Navy Jack. In fact, it’s been used several times throughout America’s history for our Navy, particularly during periods of nationalist and patriotic fervor. Where did the flag come from? And how did it become the current standard of the United States Navy?

The symbolism of the national ensign is familiar to vexillologists and American patriots alike, bearing the 13 white stripes to signify the original colonies that rebelled against the British Crown. Imposed on top are familiar symbols from the Gadsden Flag. First, the rattlesnake, this time uncoiled and not ready to strike. Second, the familiar legend “Don’t Tread On Me,” often rendered without the apostrophe, as a warning to tyrants everywhere that the seemingly docile rattlesnake can quickly coil and strike when the time is right. This combination of American flag features along with a slogan of resistance to tyranny have created an iconic national flag. But it’s not the original First Navy Jack.

In fact, no one is quite sure what the original design was. Commodore Esek Hopkins commissioned a “striped” jack, which many historians believe was the 13 stripes and nothing more. The earliest attested flag is from 1880, over 100 years after the formation of the Continental Navy and nearly a century after the formation of the United States Navy, and looked like what we now call the First Navy Jack. This design is found in History of the Flag of the United States by Admiral George Henry Preble, an influential history tome of the time. While this doesn’t mean that the early Navy didn’t fly the First Navy Jack, modern scholarship generally agrees that people believed this to be the design of the flag because of an incorrect pressing plate from the time of the American Revolution.

This mistake might be because of a description of an early South Carolina flag from 1778. John Adams and Benjamin Franklin wrote the Ambassador of Sicily to thank him for allowing American ships into Sicilian ports. The letter describes the American Flag of 1777, also known as the Grand Union Flag. In addition, it describes a South Carolinian flag with a rattlesnake among 13 stripes. For more information about the history of the rattlesnake in American symbolism and vexillology, check out our history of the Gadsden Flag

The First Navy Jack begins to re-enter American history in 1880, but it doesn’t stop there. For America’s bicentennial celebration, all moored and anchored commissioned naval vessels were instructed to fly the First Navy Jack. In 1980, a century after a happy accident introduced this beautiful piece of vexillology into the American canon, then Secretary of the Navy Edward Hidalgo declared that the First Navy Jack would be flown on the jackstaff by the longest-active vessel in the United States Navy’s fleet. Eleven Navy ships have held this honor since then, the current one being the USS Blue Ridge, an amphibious command ship commissioned in 1970. The USS Constitution (“Old Ironsides”) is specifically excluded from holding this honor.

During the bicentennial year – from October 13, 1975 through December 31, 1976 – the First Navy Jack became the official naval jack once again. This was only temporary, however. On January 1, 1977, the jack reverted to the union jack that had been used ever since Hawaii entered the Union.

The First Navy Jack is now the official jack of the United States Navy and has been since September 11, 2002. Retired Captain Brayton Harris (who was Special Assistant to the Secretary of the Navy during the bicentennial year) suggested that, for the duration of the War on Terror, it once again be changed to the First Navy Jack. A directive came through on May 31, 2002, that all warships were to fly the First Navy Jack as a temporary substitute for the 50 white star flag. Most ships in the fleet chose to comply on the first anniversary of the September 11th terrorist attacks. This included the USS Constitution, but it does not include Coast Guard cutter ships. Likewise excluded are Coast Guard patrol boats, Military Sealift Command vessels (most of which are under civilian command) and National Oceanic and Atmospheric Administration. These all continue to fly the 50-star jack.

The flag has other current uses within the U.S. Navy. Shore facilities of the American Navy can optionally fly the First Navy Jack, provided that they are also flying the 50-star jack as well. And sailors and naval officers have the option of wearing the First Navy striped Jack on flight suits as well as some versions of the Navy Working Uniform – this includes sailors and officers wearing the Army Combat Uniform while serving with Army units.

While the First Navy Jack doesn’t have the same widespread use in protest movements as the Gadsden Flag it resembles, it was a rallying icon for the fight against a smoking ban in Indiana The flag also appeared at one of the first memorials for the victims of the Boston Marathon bombers.

U.S. Navy Jack flag history is as interesting as it is mysterious, but it might be attractive to American patriots for one simple reason: It combines the symbolism of the American nation along with the symbolism of resistance to tyranny. For those who want to simultaneously show off their love of liberty alongside their love of America, there may be no better option than the First Navy Jack – steeped in all the great traditions of the USA.