Don't Give Up the Ship: How The Commodore Perry Flag Inspired American Bravery & Tenacity 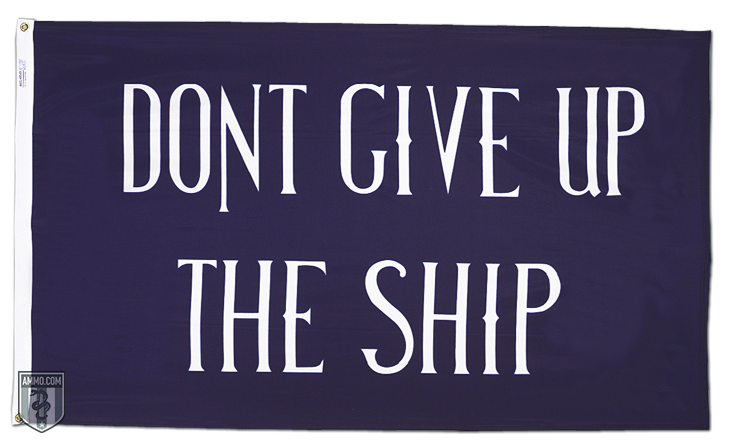 Shop Now
“Don’t Give Up the Ship” is seen on everything from coasters and coffee mugs to sweaters and license plates these days. And while it’s a cool slogan evoking a sense of resilience in the face of adversity, very few people actually know what it means and the history behind it.

This popular slogan can be found on the Commodore Perry Flag, which was created during the War of 1812, much like another indispensable symbol of American culture – “The Star Spangled Banner.” It’s also the product of a compelling personal story that has almost universally been forgotten in the 200 years since the Second American Revolution of 1812.

The War of 1812 is one of the least studied eras of American history. If Americans know anything about the War of 1812, they know that British and Canadian forces burned down the White House. Some might have heard that the New England states planned secession during this period, and that this plot essentially led to the end of the Federalists as a national party. Don't give up the ship is actually attributed to the War of 1812.

It started as a conflict over shipping, but what it was really about was the British Empire attempting to reassert dominance over the former colonies. Until the War of 1812 concluded, the British viewed the nascent American nation in much the same way China views Taiwan – a renegade colony that can mostly be left alone due to its insignificance, but will eventually be brought to heel.

The War of 1812 was an attempt to reconquer the colonies or, at the very least, occupy everything west of the Mississippi to prevent westward expansion. For the Americans, it was to secure not only their independence and possibility for further expansion, but also to protect American sailors against “impressment” by the British Navy, an effective form of naval slavery widely practiced by the British against American frigate and civilian ships alike.

Commodore Oliver Hazard Perry enters this story because the War of 1812 was largely a naval war. Indeed, when the war began, the United States had no control over the Great Lakes with the exception of Lake Huron. America’s Navy was very small at the time, especially when compared to the Royal Navy, which then dominated the entire world’s shipping lanes. Commodore Perry requested, and was given command of, the entire naval effort in Lake Erie.

Commodore Perry was not only brilliant in his command, but he was also tenacious. The British fully expected Commodore Perry to surrender his flagship, the USS Lawrence, during the Battle of Lake Erie. So confident were they, that they sent small American vessel to accept his surrender. However, Commodore Perry lived by the (possibly apocryphal) dying words and rallying cry of Captain James Lawrence, his friend and the man after whom the ship was named – “DON’T GIVE UP THE SHIP.”

This was not without good reason: Perry was one of three capable crewmen on the ship, the other two being the ship’s chaplain and the ship’s purser. Perry himself fired the ship’s parting salvo before having the surviving and largely injured crew row him a half mile through heavy gunfire to the USS Niagara, where he took command.

The final result of the Battle of Lake Erie was the complete surrender of an entire British squadron, ensign fallen – a first in world history. Commodore Perry accepted the surrender on the wrecked Lawrence to show the British officers the price his men had paid to win the battle.

The Battle Flag and Captain Lawrence

The Commodore Perry is perhaps better called the Captain Lawrence Flag. The legend it bears is based on what are alleged to be final words repeated by Captain James Lawrence after his severe injury at the hands of British frigate gunfire while aboard the USS Chesapeake battling the HMS Shannon on June 1, 1813. Commodore Perry learned of Captain Lawrence’s death and was distraught. He commanded that a brig be named Lawrence in honor of his dead friend.

The ship now needed a battle flag and the parting words of Captain Lawrence were seen as ideal. Erie, Pennsylvania seamstress Margaret Foster Steuart was charged with creating the flag. It took her, her two daughters, three nieces and a cousin only a few days to craft the flag, which would fly from the Lawrence in battle.

The original flag is still with us and can be seen in the United States Naval Academy Museum.

Who Was Captain James Lawrence?

While the flag is named after Commodore Perry, it is worth delving into the life of the American hero who uttered the words the flag bears, Captain James Lawrence.

Like many great American heroes, Captain Lawrence’s beginnings sound like a work of fiction rather than historical fact. His mother died during his infancy, which wasn’t long before his Loyalist father abandoned the child to flee to Canada, leaving him in the care of his half sister. He studied law at Woodbury Academy, but sought a life of adventure on the high seas, enlisting in the U.S. Navy as a midshipman.

He cut his teeth seeing action during the Quasi-War, an undeclared war with Napoleonic France over shipping rights. Upon returning from overseas on a diplomatic mission, Lawrence learned that he had been promoted to Captain. He was given command of the Frigate Chesapeake, which was almost immediately attacked by blockading British ships upon leaving port.

Much like his friend Commodore Perry, Captain Lawrence was no pushover. Though mortally wounded, legend has it that he said to his junior officers: "Don't give up the ship. Fight her till she sinks.” Another version of his final words was: “Tell them to fire faster; don't give up the ship." The ship was overwhelmed by a British boarding party and Captain Lawrence died of his wounds en route to Halifax, Nova Scotia, under a Great Britain flag.

After his death, he was given the Congressional Gold Medal and the Thanks of Congress, as well as being elected to the New York State Society of the Cincinnati. He is buried in Trinity Church Cemetery in New York, New York. No fewer than ten counties are named after Captain Lawrence, as well as seven municipalities and a neighborhood in Pittsburgh. The United States Navy has named five different ships after the Captain.

There are a number of different designs of the flag, none of which are historically accurate. Designs available for commercial purchase reflect contemporary design sensibilities rather than historical ones.

The Commodore Perry Flag might not have the cache of the Gadsden Flag, however, it is very similar in one important respect – it contains a powerful phrase of American tenacity and bravery, without which the United States would not be independent today. Don't give up the ship has left a permanent stamp on our naval history and patriots interested in historical banners shouldn’t overlook this design.