The Bennington Flag: A Pre-Constitutional Symbol of Freedom 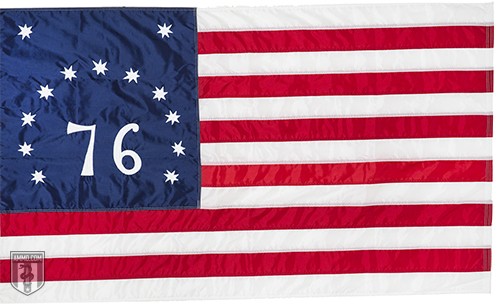 Shop Now
Like many flags championed by the Patriot, Constitutionalist and Second Amendment movements, the Bennington Flag is older than the Constitution itself. As the “76” in the canton probably gives away, the flag dates back to the revolutionary period, from the Battle of Bennington in 1777. The battle didn’t actually take place in Bennington, Vermont, but rather about 10 miles away in what is now Upstate New York.

In some ways, the flag is easy to ignore. It looks much like the more iconic Betsy Ross Flag, but there are several crucial differences. First, there is the “76” in the canton. Second, the top stripe of the 13 stripes is white, rather than the more customary red. Third, the canton is much taller than the official American flag, or its earlier equivalents. (Usually, the canton takes up the corner of the top seven stripes. On the Bennington Flag, however, it takes up nine.) Finally, the stars on the flag have seven points rather than five.

Commonly known as the Bennington 76 flag, it enjoys increased popularity at times when America is reconnecting with its revolutionary roots. For example, the Fillmore Flag, a version of the Bennington Flag allegedly from the Battle of Bennington itself, may have been flown at a 50th celebration of American independence. It was also popular in 1876 for America’s centenary, and 1976 when all things “Spirit of ‘76” were the rage.

All pre-Constitutional flags have a rich lore associated with them, and the Bennington Flag is no exception. While historians dispute it, legend has it that the actual flag from the Battle of Bennington was retrieved from the field by Nathaniel Fillmore, Sr. – the grandfather of Millard Fillmore, last of the Whigs. This flag, known as the Fillmore Flag, entered the family’s possessions and was once owned by Millard Fillmore himself. He later passed it on to Philetus P. Fillmore, who flew the flag for the Battle of Bennington’s cenetary. Maude Fillmore later allegedly donated the flag to the Bennington Museum.

The battle saw a force of 2,000 Continentals, mostly made up of New Hampshire and Massachusetts militiamen, square off against a force of less than 1,500 loyalist forces of Brits and their Hessian mercenaries. The Continental forces were augmented by the Green Mountain Boys of Vermont, whose flag, that of the Vermont Republic (who had North America’s first written constitution), is much better known than the Bennington Flag.

This battle represented a turning point for British strategy in North America. At this point, the Brits had basically given up on the New England colonies, which seemed too difficult to control. Instead, they were hoping to isolate these colonies from the Southern colonies, which were perceived as being more loyal to the crown. This isolation wasn’t meant to be a mere political isolation. Rather, the British forces were hoping to physically separate the New England colonies from the South with a three-part pincer movement.

Weather prevented battle for several days, but the battle finally began on August 16. General John Stark, who commanded the Continental forces, said that the Continentals were asserting their “natural-born rights as Englishmen.” Counterposed to those, Stark said in his speech rallying the troops, were Tories (royalists) and redcoats. His men then went into the woods to outflank Hessian troops, whose British commanders thought the Continentals were retreating. What’s more, the Hessian troops spoke very little English. British commanders told them that loyalist forces would have white strips of paper in their hats, so the Continental forces modified their apparel accordingly. British forces and their native allies quickly retreated, though Hessian forces fought fiercely, even when running low on gunpowder and other supplies.

Casualties were relatively low, but fighting was most brutal between Loyalists and Continentals. This is because, to a certain extent, the American Revolutionary War was a civil war between those loyal to the crown and those opposed to it. American-born Loyalists and their Continental counterparts were often from the same towns and knew each other intimately.

While the Battle of Bennington was not a major battle, it had far-reaching effects. Native Americans were reticent to put their forces behind the Loyalist and British forces after their defeat. What’s more, the American Patriots had their morale buoyed by the victory, and the Battle of Bennington became a rallying point for the entire nation. Colonel John Stark, leader of the Green Mountain Boys, was made a brigadier by John Hancock, then the president of the Continental Congress.

Vermont celebrates the Battle of Bennington with Bennington Battle Day on August 16, a state holiday. The actual battlefield itself is now a historic site in New York.

The Bennington Flag is a pre-Constitutional flag with a great resemblance to the national flag we have today. While it’s less used in the Patriot, Constitutionalist and Second Amendment movements than other flags like the the Gadsden Flag, or the Gonzales Flag, it’s much easier to find at a store due to its resemblance to the United States flag. Thus, while it hearkens back to an earlier era of liberty in the United States (and before), it does not have the same provocative connotations as other flags used by American Patriots today.

But perhaps most importantly, it’s a handsome flag worthy of flying alongside Old Glory to show your commitment to freedom and patriotism. The reversed striping, the “76,” the seven-pointed stars and the unique and memorable arc of the star are all components of what makes this such an iconic symbol of the American nation and its principles.