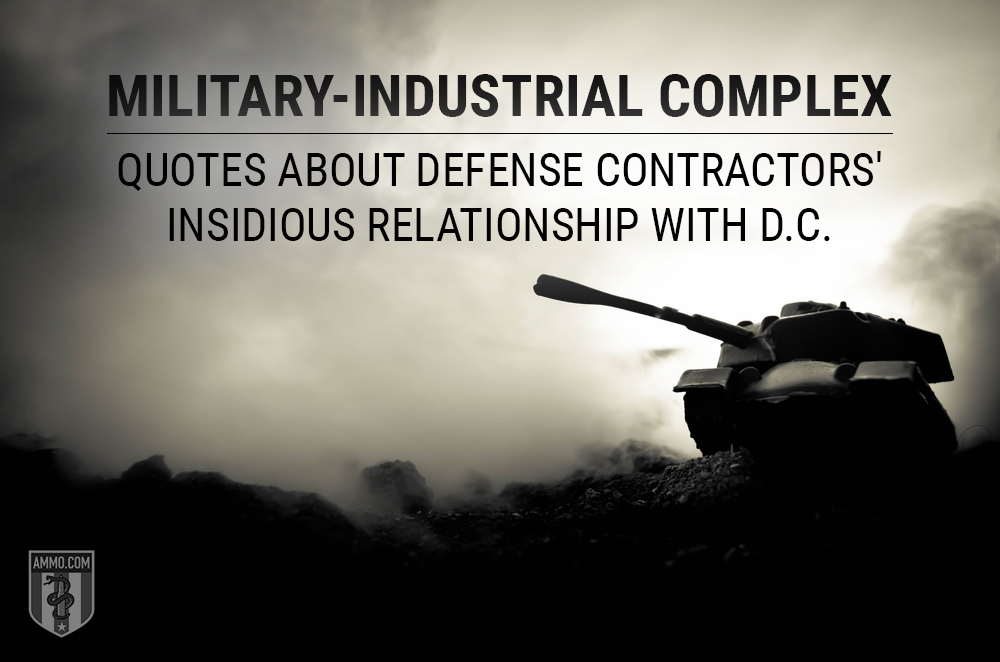 A term made popular by President Dwight D. Eisenhower in his 1961 farewell address, the "military-industrial complex" describes the insidious relationship between defense contractors and American politicians.

The military-industrial complex is at the root of Washington's sale of arms to foreign governments who commit atrocities, an ever-increasing defense budget, the NSA and others spying on all American citizens, the Pentagon helping militarize local police forces, and a host of other unintended consequences due to this misallocation of resources.

All of this cumulatively threatens America's civil liberties, adds to our debt, implicates our forces and resources in crises that are none of our business, and further compromises our own economic and national security. These are some of our favorite quotes on the military-industrial complex.

Quotes from Presidents on War and the Military-Industrial Complex

“Every gun that is made, every warship launched, every rocket fired signifies, in the final sense, a theft from those who hunger and are not fed, those who are cold and are not clothed. This world in arms is not spending money alone. It is spending the sweat of its laborers, the genius of its scientists, the hopes of its children. The cost of one modern heavy bomber is this: a modern brick school in more than thirty cities. It is two electric power plants, each serving a town of sixty thousand population. It is two fine, fully equipped hospitals. It is some fifty miles of concrete pavement. We pay for a single fighter with a half million bushels of wheat. We pay for a single destroyer with new homes that could have housed more than eight thousand people. This is not a way of life at all, in any true sense. Under the cloud of threatening war, it is humanity hanging from a cross of iron.”

“Only an alert and knowledgeable citizenry can compel the proper meshing of the huge industrial and military machinery of defense with our peaceful methods and goals so that security and liberty may prosper together.” 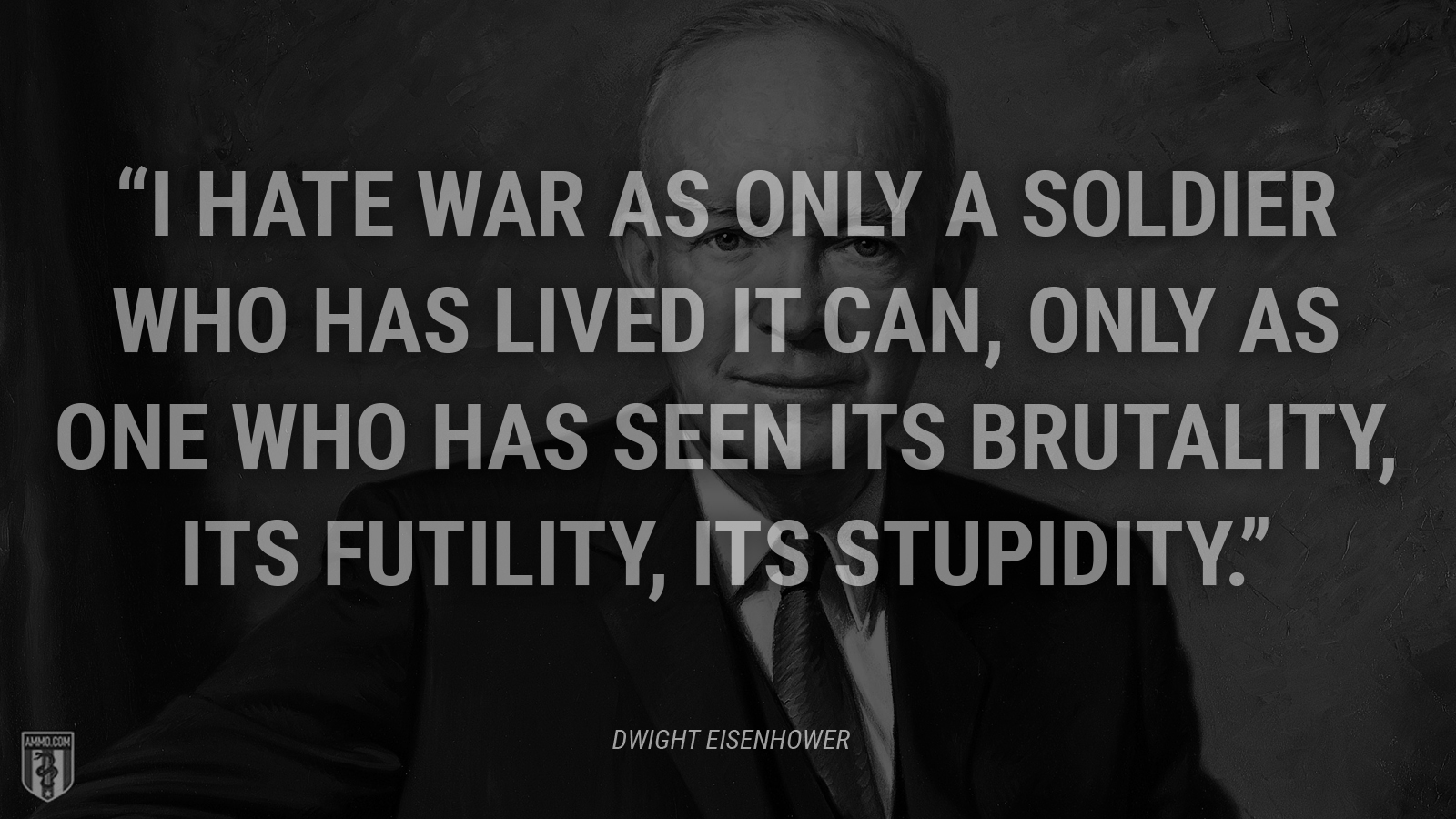 “I hate war as only a soldier who has lived it can, only as one who has seen its brutality, its futility, its stupidity.”

“We will bankrupt ourselves in the vain search for absolute security.”

“The spirit of this country is totally adverse to a large military force.”

“Military glory – that attractive rainbow, that rises in showers of blood – that serpent's eye, that charms to destroy.” 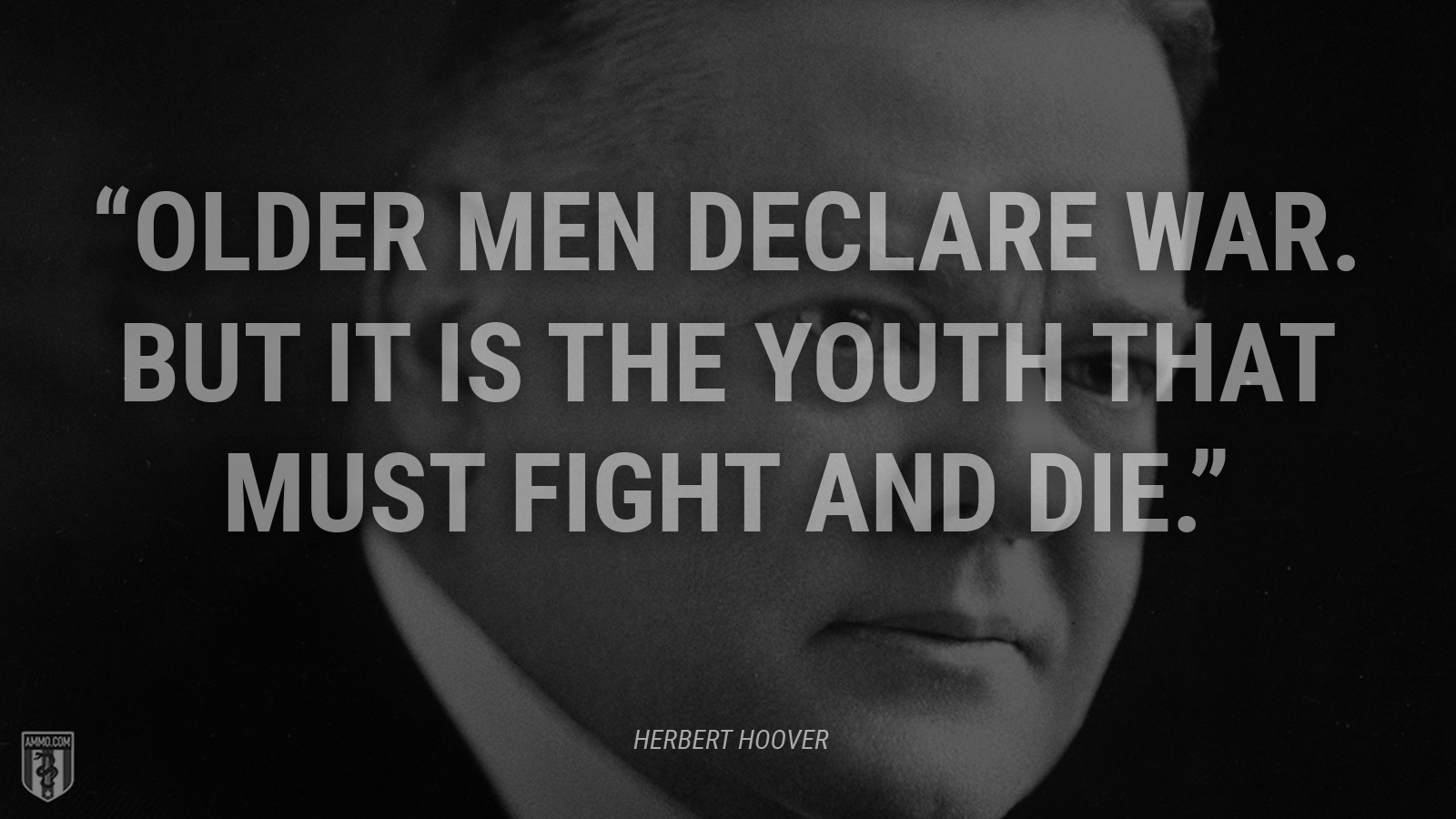 “Older men declare war. But it is the youth that must fight and die.”

“...overgrown military establishments which, under any form of government, are inauspicious to liberty, and which are to be regarded as particularly hostile to republican liberty.”

“No nation could preserve its freedom in the midst of continual warfare.”

“If Tyranny and Oppression come to this land, it will be in the guise of fighting a foreign enemy.” 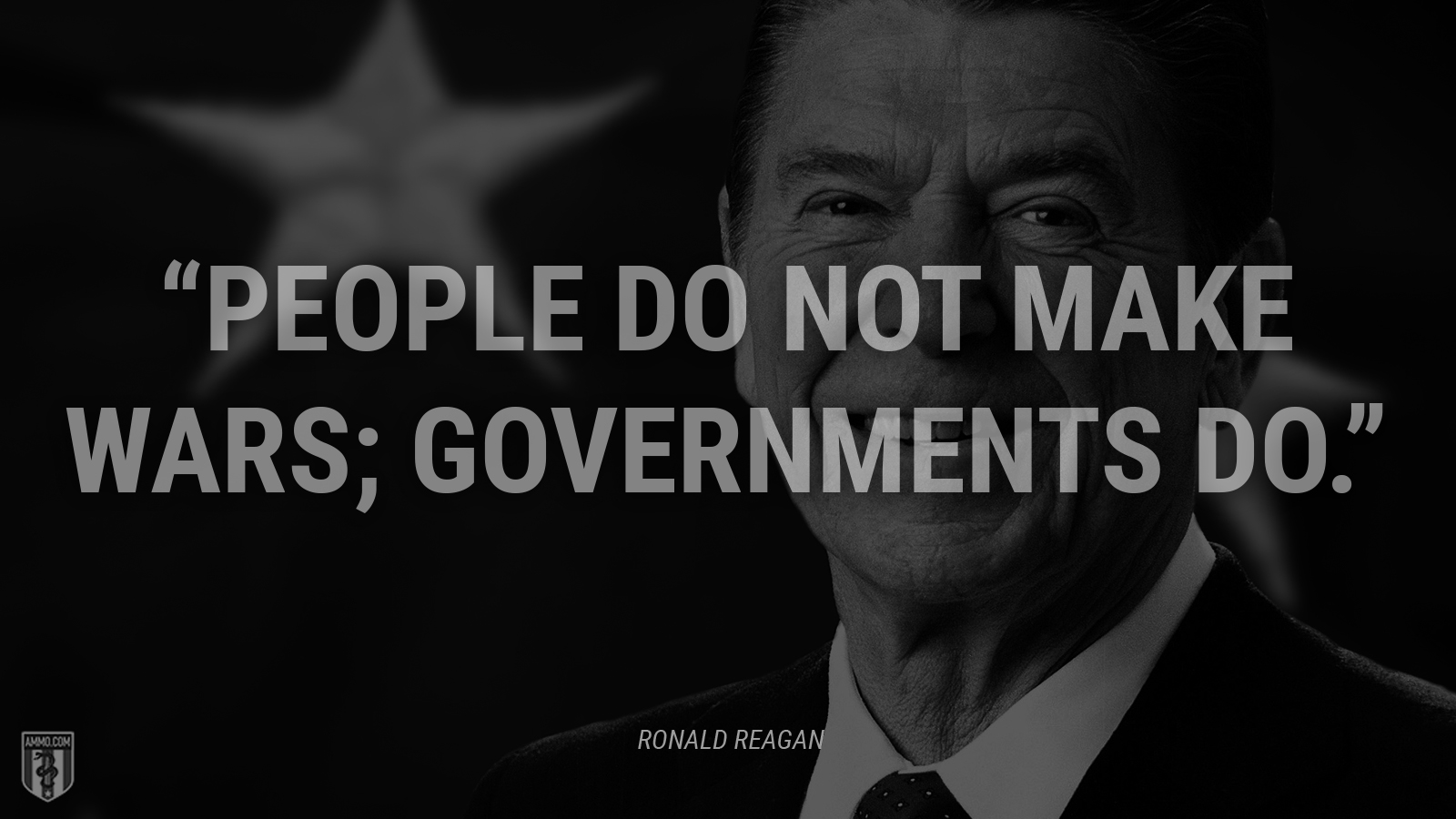 “People do not make wars; governments do.”

“Wherever the standard of freedom and Independence has been or shall be unfurled, there will her heart, her benedictions and her prayers be. But she goes not abroad, in search of monsters to destroy. She is the well-wisher to the freedom and independence of all. She is the champion and vindicator only of her own.”

“The de facto role of the US armed forces will be to keep the world safe for our economy and open to our cultural assault.” 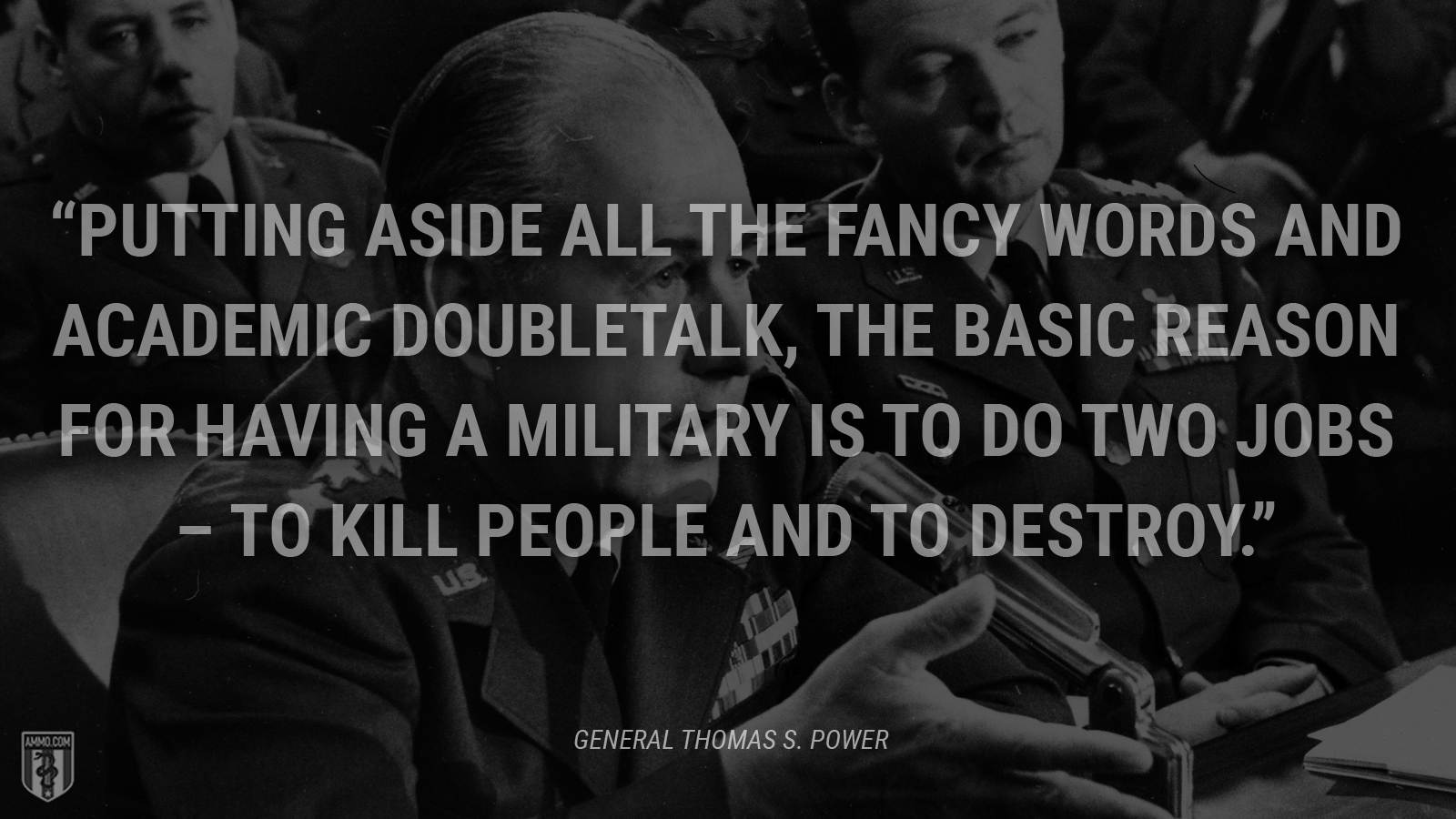 “Putting aside all the fancy words and academic doubletalk, the basic reason for having a military is to do two jobs --to kill people and to destroy.”

“Our country is now geared to an arms economy bred in an artificially induced psychosis of war hysteria and an incessant propaganda of fear.”

“It is only those who have neither fired a shot nor heard the shrieks and groans of the wounded who cry aloud for blood...War is hell.”

“There are only two things we should fight for. One is the defense of our homes and the other is the Bill of Rights.”

Quotes from Political Authors and Intellectuals on War and Liberty 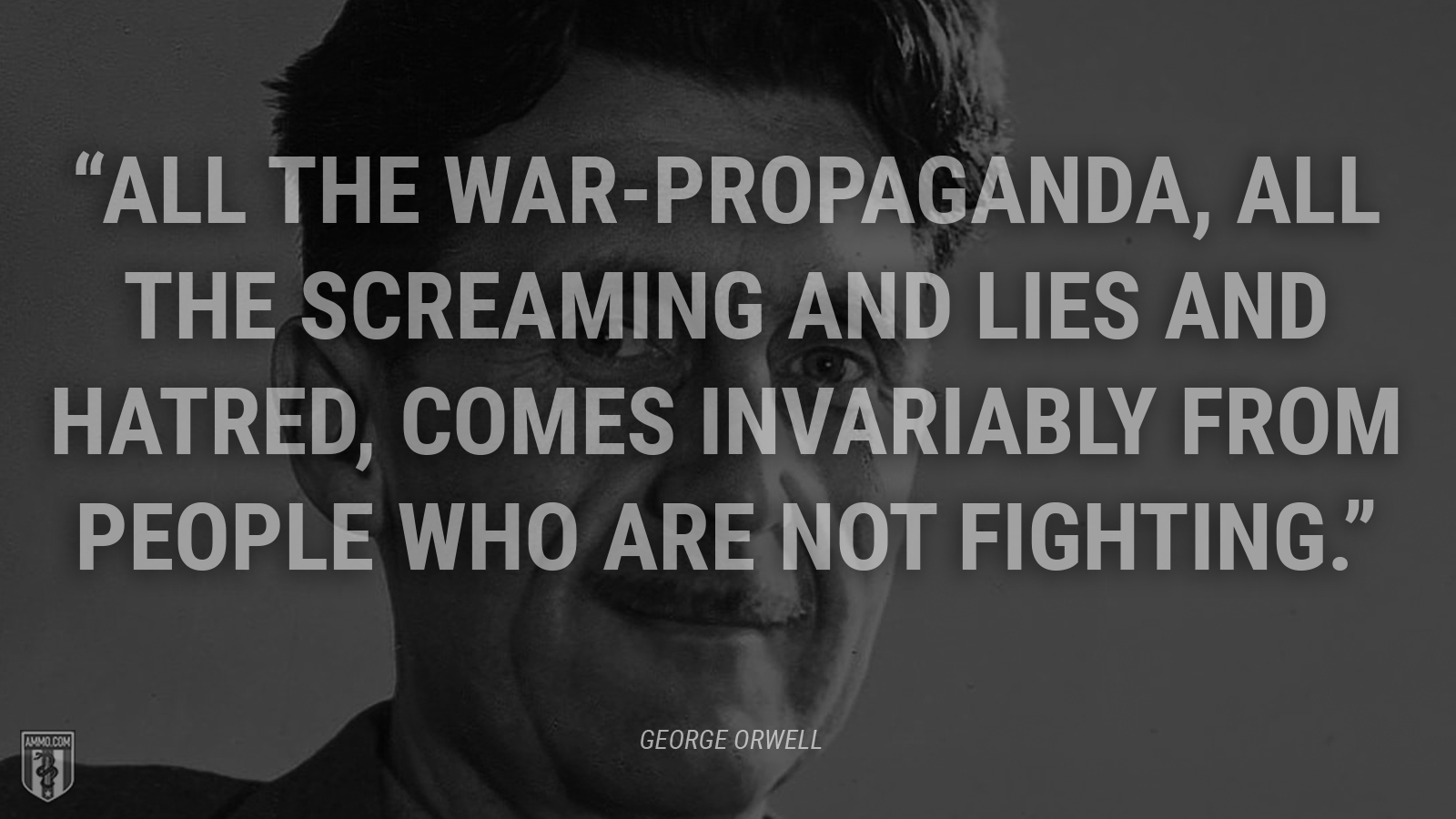 “All the war-propaganda, all the screaming and lies and hatred, comes invariably from people who are not fighting.”

“More than six decades later, there is no Cold War, no determined superpower enemy with friends in every region, no nuclear arms race, and no credible foreign threat to America’s survival. The risk of conflict with emerging China is limited by a deep economic interdependence with the United States that could never have existed between America and its Cold War communist rivals. Today’s Russia would love to check American power, but it lacks the Soviet Union’s ideological appeal, potent allies, and military reach. No coalition of would-be American adversaries measures up. Yet the United States continues to spend more on its military than all its potential competitors combined. It’s only natural that with so much money spent on advanced weapons, policymakers will find uses for them to justify the expense—and to be sure they perform as advertised—in ways that add to our debt, implicate us in crises that are none of our business, and further compromise our own security. Making matters worse, the 9/11 terror attacks have given birth to an enormous new security bureaucracy, one that deprives Americans of our privacy and inflicts lasting damage on relations with our allies.”

“I am firmly convinced, therefore, that to set up a republic which is to last a long time, the way to set about it is to constitute it as Sparta and Venice were constituted; to place it in a strong position, and so to fortify it that no one will dream of taking it by a sudden assault; and, on the other hand, not to make it so large as to appear formidable to its neighbors. It should in this way be able to enjoy its form of government for a long time. For war is made on a commonwealth for two reasons: to subjugate it, and for fear of being subjugated by it.”

“The nationalist not only does not disapprove of atrocities committed by his own side, he has a remarkable capacity for not even hearing about them.” 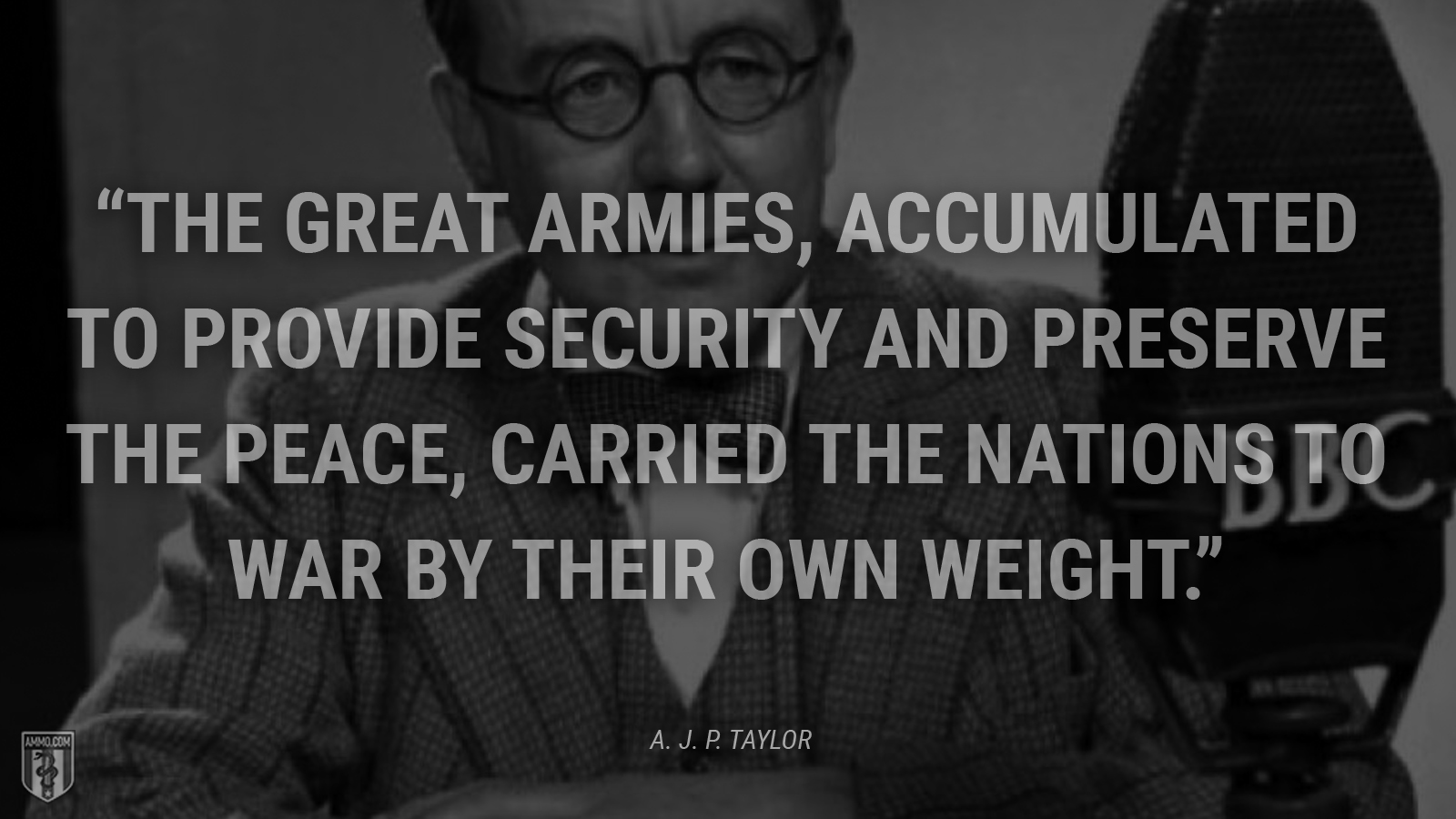 “The great armies, accumulated to provide security and preserve the peace, carried the nations to war by their own weight.”

“War is a way of shattering to pieces, or pouring into the stratosphere, or sinking in the depths of the sea, materials which might otherwise be used to make the masses too comfortable, and hence, in the long run, too intelligent.”

“Before the war is ended, the war party assumes the divine right to denounce and silence all opposition to war as unpatriotic and cowardly.” 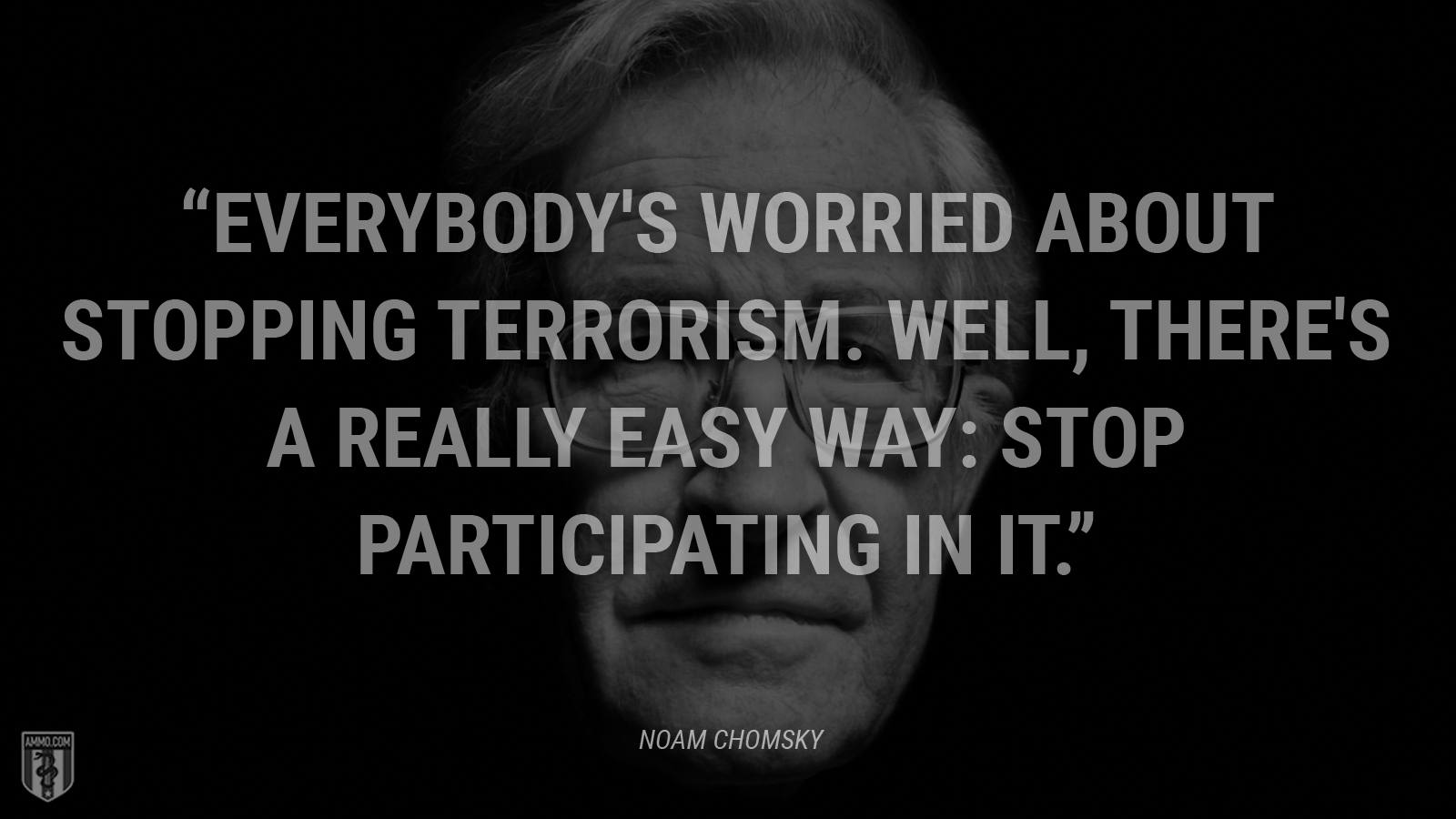 “I'm afraid, based on my own experience, that fascism will come to America in the name of national security.”

“We are the ones responsible to determine whether the war that our marines, soldiers and airmen are fighting in is worth the cause.” 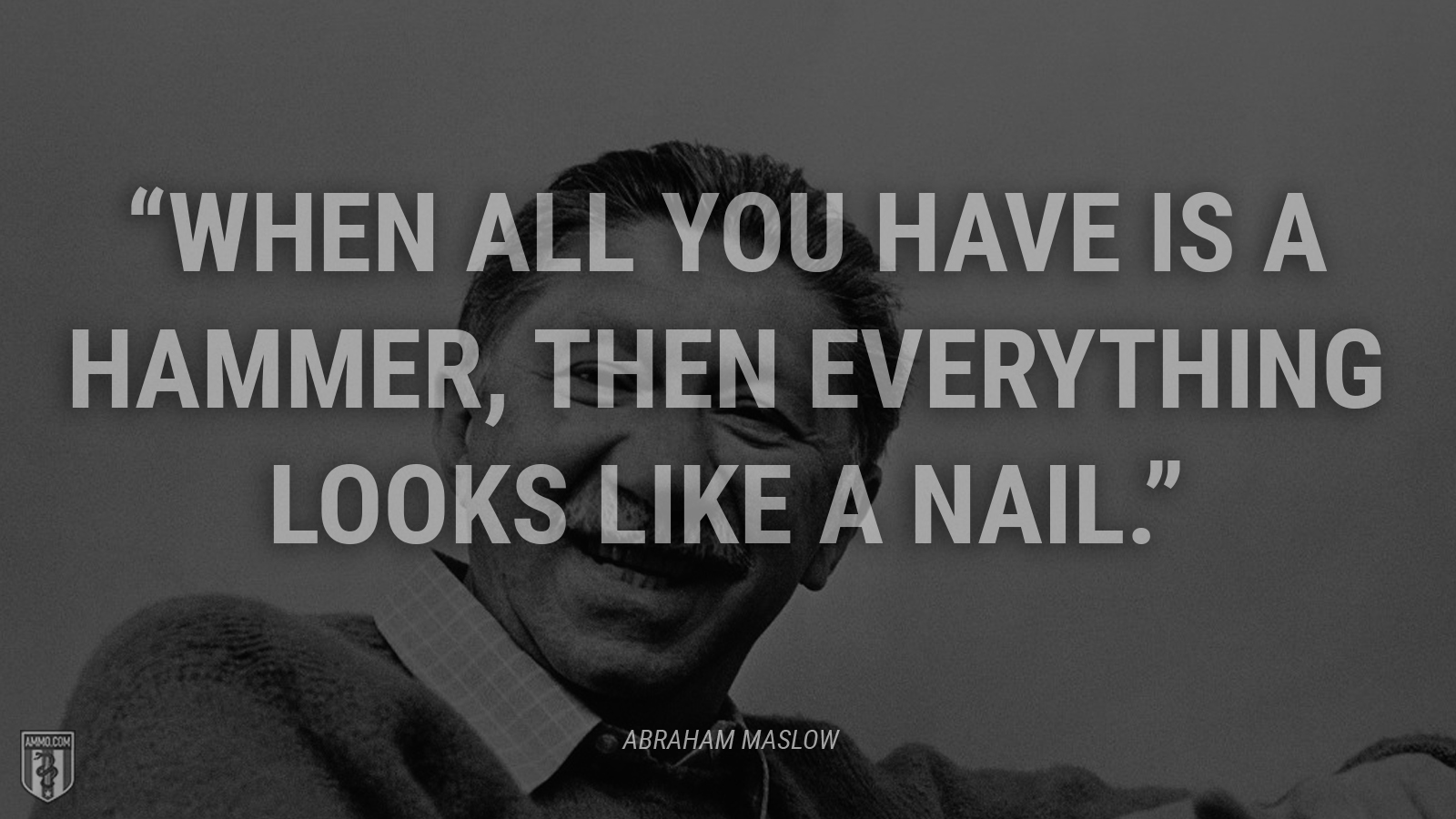 “When all you have is a hammer, then everything looks like a nail.”

“A man who says that no patriot should attack the war until it is over...is saying no good son should warn his mother of a cliff until she has fallen.”

“Let not your zeal to share your principles entice you beyond your borders.”

“Social order at the expense of liberty is hardly a bargain.” 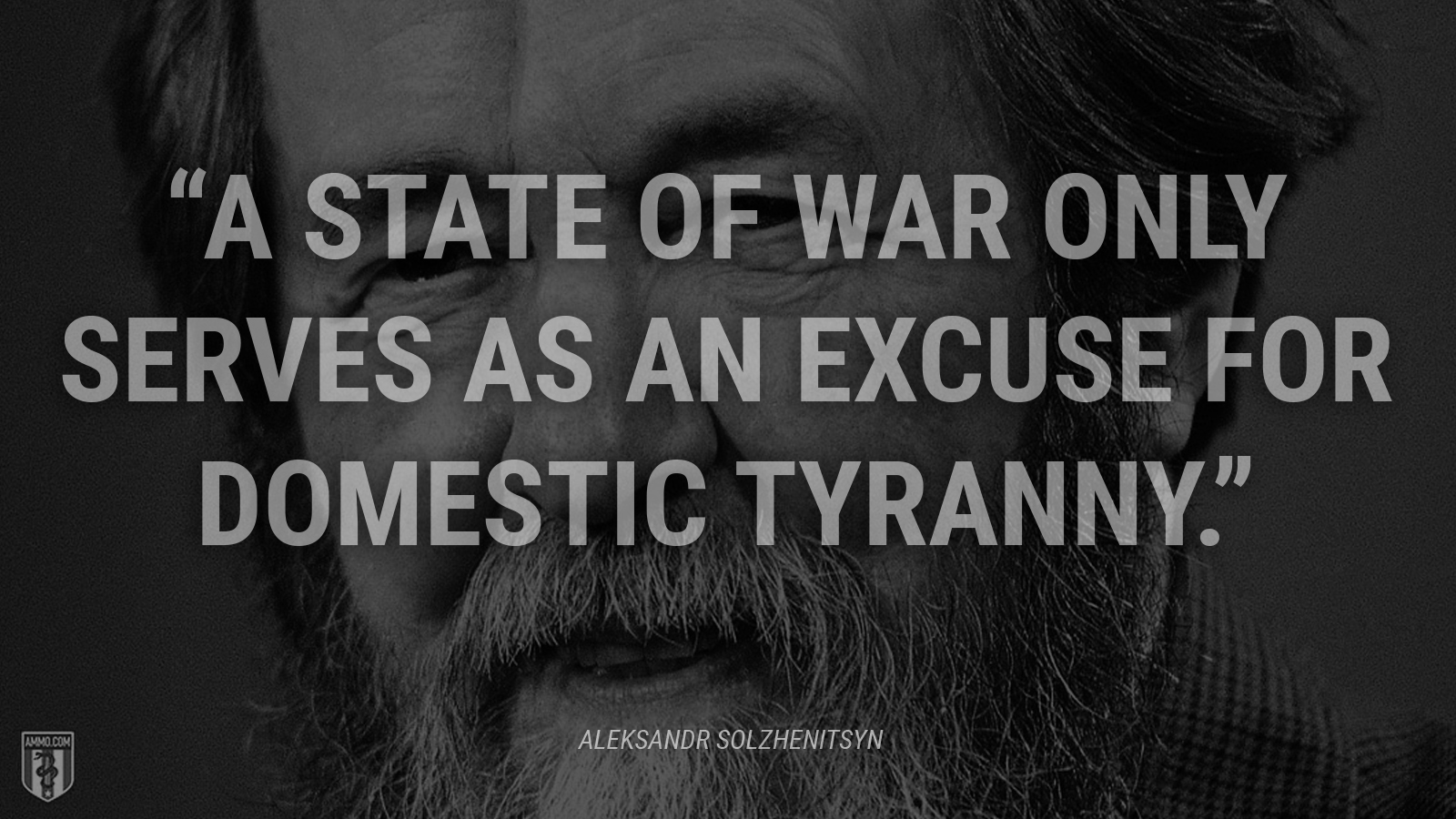 “A state of war only serves as an excuse for domestic tyranny.”

“Our modern states are preparing for war without even knowing the future enemy.”