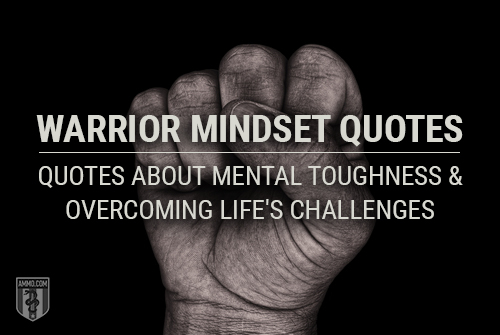 Achieving mental strength means adopting a mindset that allows you to take on any of life's challenges, whenever they may arise. These are our favorite quotes on the warrior mindset, to remind us that we are not victims – and we have the ability to choose our fate through perseverance and mental strength.

“Of every one-hundred men, ten shouldn't even be there, eighty are nothing but targets, nine are real fighters, and we are lucky to have them, for they make the battle. Ah, but the one, one of them is a warrior, and he will bring the others back.”

“It is better to die on your feet than to live on your knees.”

“In a street fight, there are two kinds of guys. The one who strikes, sees blood, is repelled and recoils. Then there’s one who sees blood and goes all-in to finish off the other. Well lads ... I swear I smell blood in the air out there.” 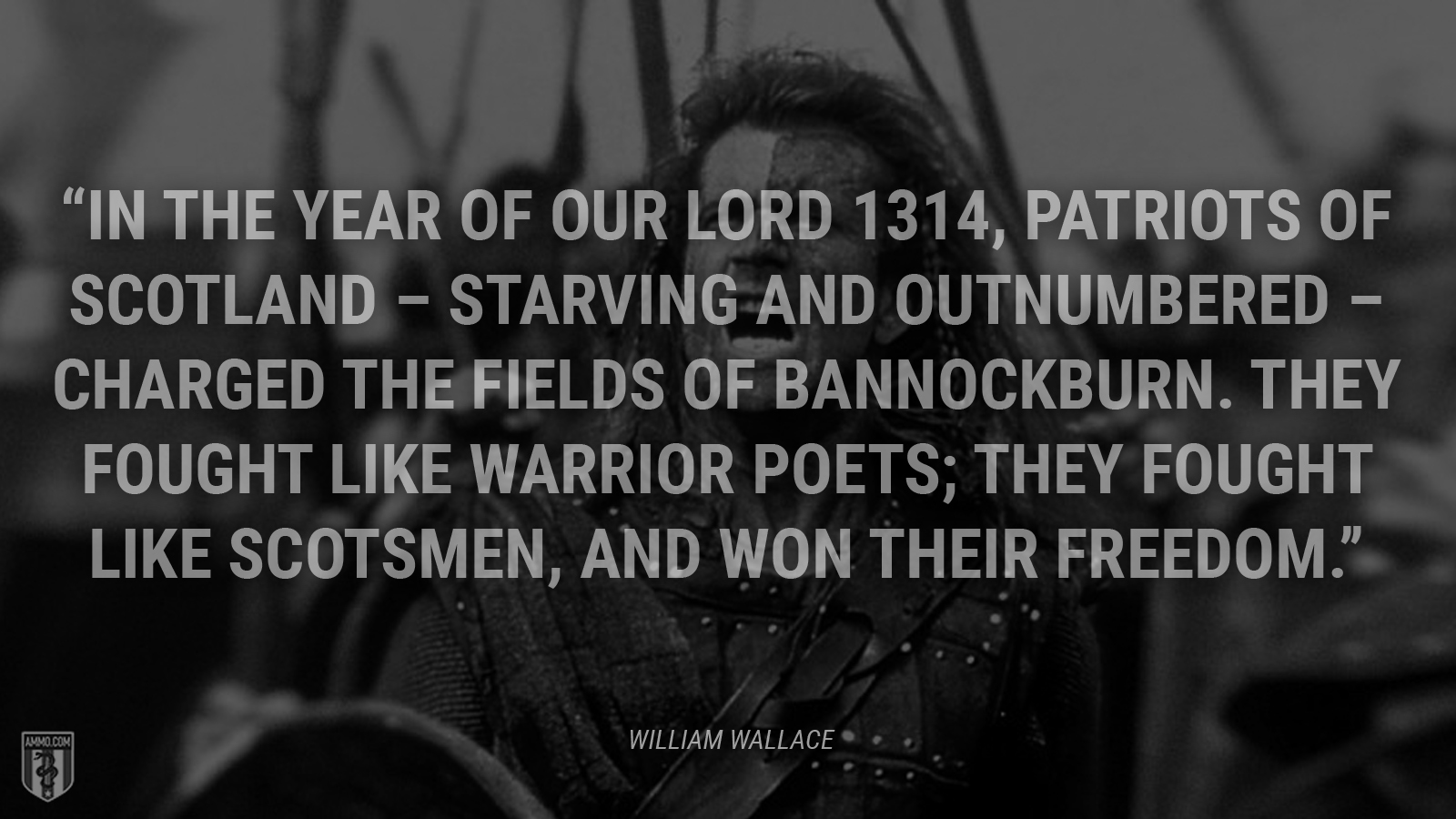 “In the Year of our Lord 1314, patriots of Scotland – starving and outnumbered – charged the fields of Bannockburn. They fought like warrior poets; they fought like Scotsmen, and won their freedom.”

“For [my girlfriend] the point of life is like, happiness. To be with people that make you feel fulfilled; to have a good time. For me, it’s all about performance. Anybody can be happy and cozy. […] Nobody achieves anything great because they are happy and cozy. It’s about being a warrior. It doesn’t matter about the cause, necessarily. This is your path and you will pursue it with excellence. You face your fear, because your goal demands it. That is the warrior spirit. I think the free-soloing mentality is pretty close to warrior culture; where you give something 100% focus, because your life depends on it.”

“Why that one? The wind has been beating that tree down since the day it was born. But it refuses to fall. It’s the struggle that gives it its beauty.” 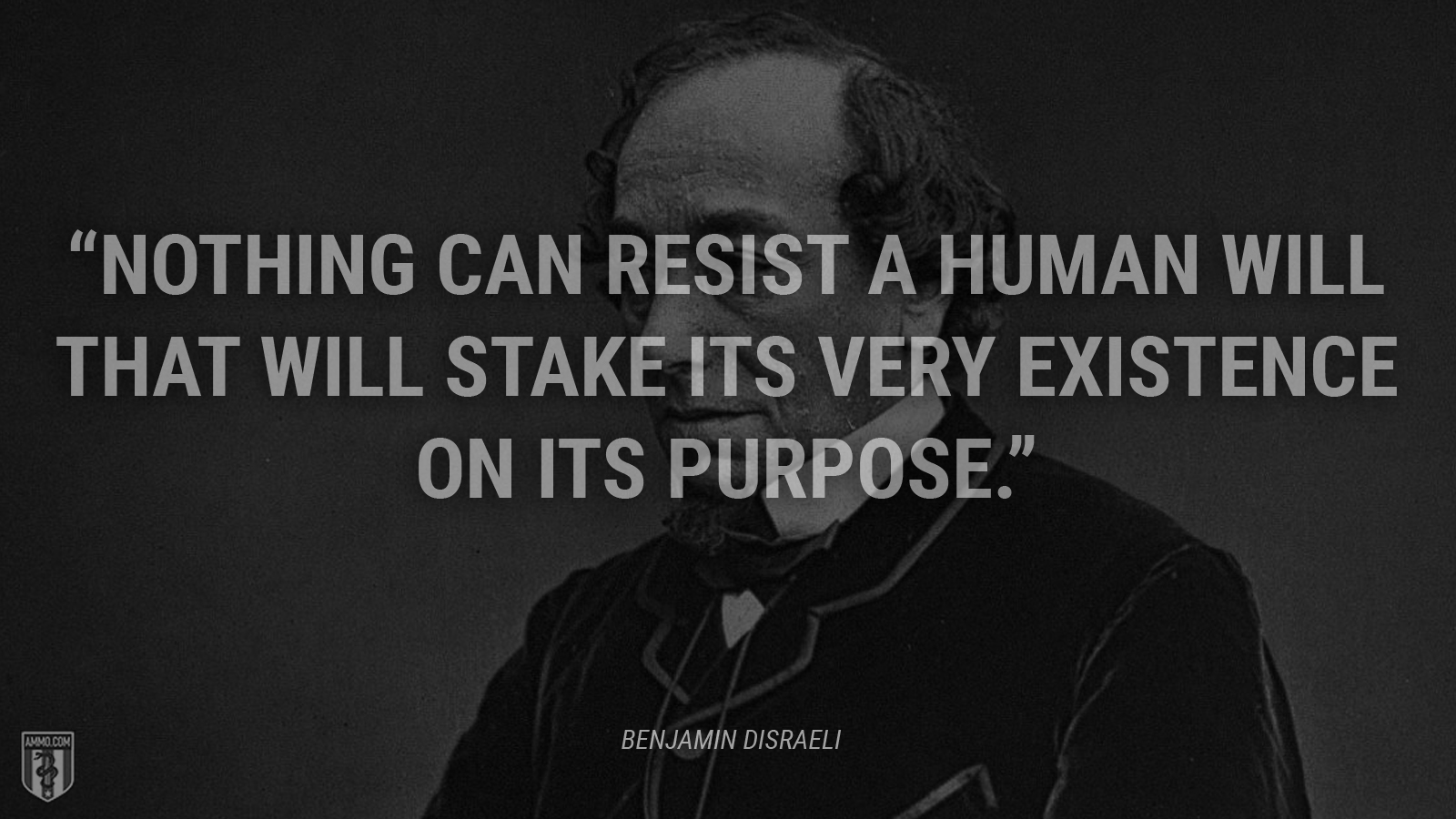 “Nothing can resist a human will that will stake its very existence on its purpose.”

“The greatest burden a child must bear is the unlived life of its parents.”

“You don't want to be in a place where there's no challenge. You might even quit your job if there's no challenge. Say, 'Well, that's a good job. It gives you security,' and you think, 'God, I can't stand this. It's eating away at my soul. It's all security and no challenge.' So why do you want a challenge? Because that's what you're built for. You're built to take on a maximal load, right? Because that's what strengthens you, and you need to be strong because life is extraordinarily difficult.

"Then the second part of that is the better part, and it's the optimistic part, which is despite the fact that life is a tragedy tainted by malevolence, at every level of existence there's something about the human spirit that can thrive under precisely those conditions if we allow that to occur, because as difficult as life is – and as horrible as we are – our capacity to deal with that catastrophe and to transcend that malevolent spirit is more powerful than that reality itself. And that's the fundamental issue. I think that's the fundamental issue of the Judeo-Christian ethic, with its emphasis on the divinity of the individual.

"As catastrophic as life is – and as malevolent as people can be, and that's malevolent beyond belief – fundamentally, a person has, in spirit, the nobility to set that right and to defeat evil. And that more than that the antidote to the catastrophe of life, and the suffering of life, and the tragedy of life that can drive you down and destroy you, is to take on exactly that responsibility, and to say, 'Well, there's plenty of work to be done, and isn't that terrible?

"There isn't anything so bad that we can't make it worse, but I have it within me to decide that I'm going to stand up against that. I'm going to strive to make the world a better place. I'm going to strive to constrain the malevolence that's in my own heart, and to set my family straight, and to work despite my tragic lot for the betterment of everything that's in front of me.' And the consequence of that – the immediate consequence of that – is that when you make the decision to take on all of that voluntarily – which is to stand up straight, by the way, with your shoulders back – to take all that on voluntarily, as soon as you make that decision, then all the catastrophe justifies itself in the nobility of your striving. And that's what it means to be an individual.”

“You must retain faith that you will prevail in the end, regardless of the difficulties. AND at the same time…You must confront the most brutal facts of your current reality, whatever they might be.” 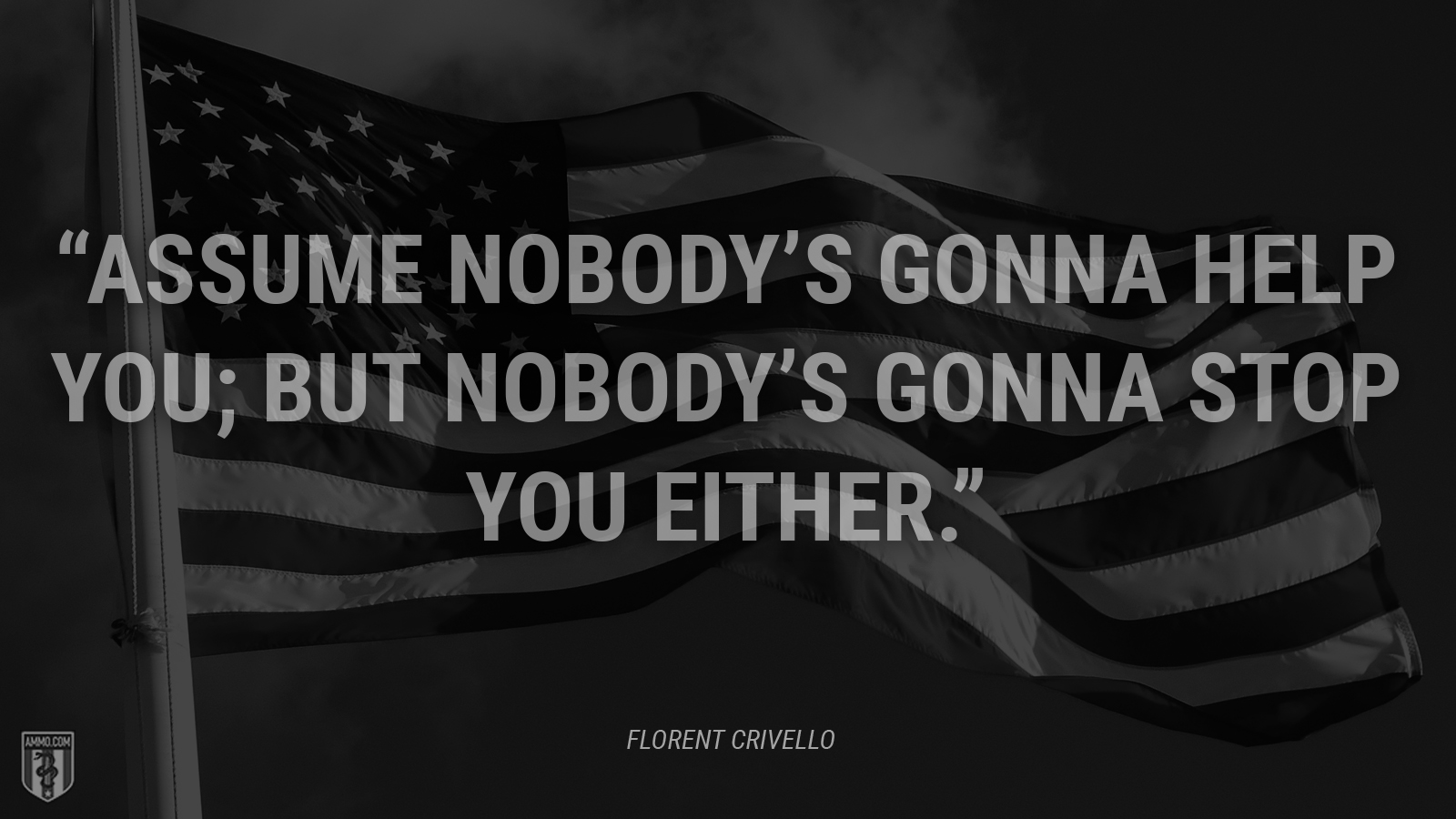 “We are defined by our actions, not our words.”

“Every normal man must be tempted, at times, to spit upon his hands, hoist the black flag, and begin slitting throats.”

“Live your life that the fear of death can never enter your heart.
Trouble no one about his religion.
Respect others in their views and demand that they respect yours.
Love your life, perfect your life, beautify all things in your life.
Seek to make your life long and of service to your people.
Prepare a noble death song for the day when you go over the great divide.
Always give a word or sign of salute when meeting or passing a friend, or even a stranger, if in a lonely place.
Show respect to all people, but grovel to none.
When you rise in the morning, give thanks for the light, for your life, for your strength.
Give thanks for your food and for the joy of living.
If you see no reason to give thanks, the fault lies in yourself.
Abuse no one and no thing, for abuse turns the wise ones to fools and robs the spirit of its vision.
When your time comes to die, be not like those whose hearts are filled with fear of death, so that when their time comes they weep and pray for a little more time to live their lives over again in a different way.
Sing your death song, and die like a hero going home.” 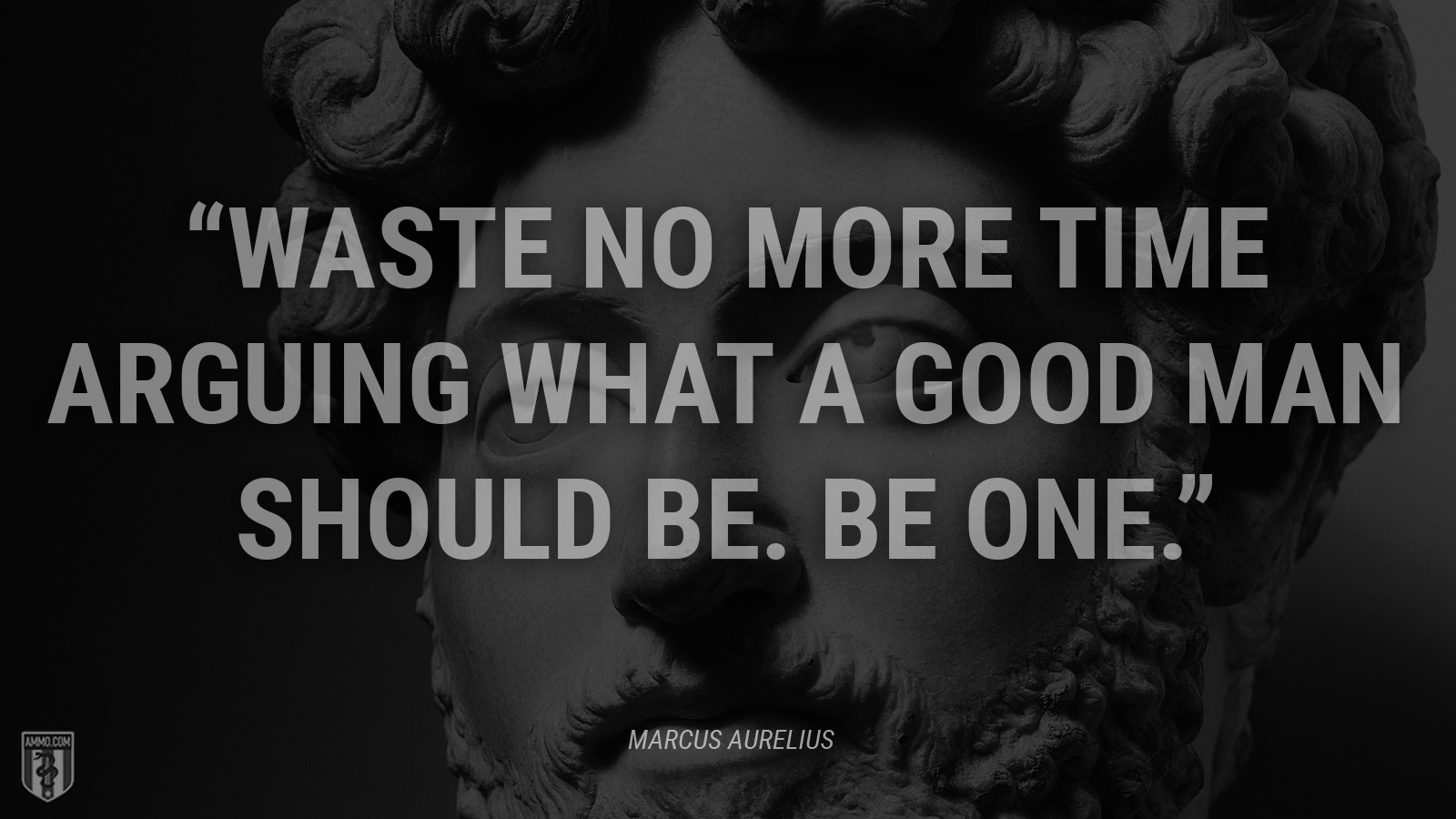 “Waste no more time arguing what a good man should be. Be one.”

“It ought to be remembered that there is nothing more difficult to take in hand, more perilous to conduct, or more uncertain in its success, than to take the lead in the introduction of a new order of things. ...Because the innovator has for enemies all those who have done well under the old conditions, and lukewarm defenders in those who may do well under the new.”

“The Romans never allowed a trouble spot to remain simply to avoid going to war over it, because they knew that wars don't just go away, they are only postponed to someone else's advantage. Therefore, they made war with Philip and Antiochus in Greece, in order not to have to fight them in Italy... They never went by that saying which you constantly hear from the wiseacres of our day, that time heals all things. They trusted rather their own character and prudence — knowing perfectly well that time contains the seeds of all things, good as well as bad.”

“A prince ought to have no other aim or thought, nor select anything else for his study, than war and its rules and discipline; for this is the sole art that belongs to him who rules, and it is of such force that it not only upholds those who are born princes, but it often enables men to rise from a private station to that rank. And, on the contrary, it is seen that when princes have thought more of ease than of arms they have lost their states. And the first cause of your losing it is to neglect this art; and what enables you to acquire a state is to be master of the art.” 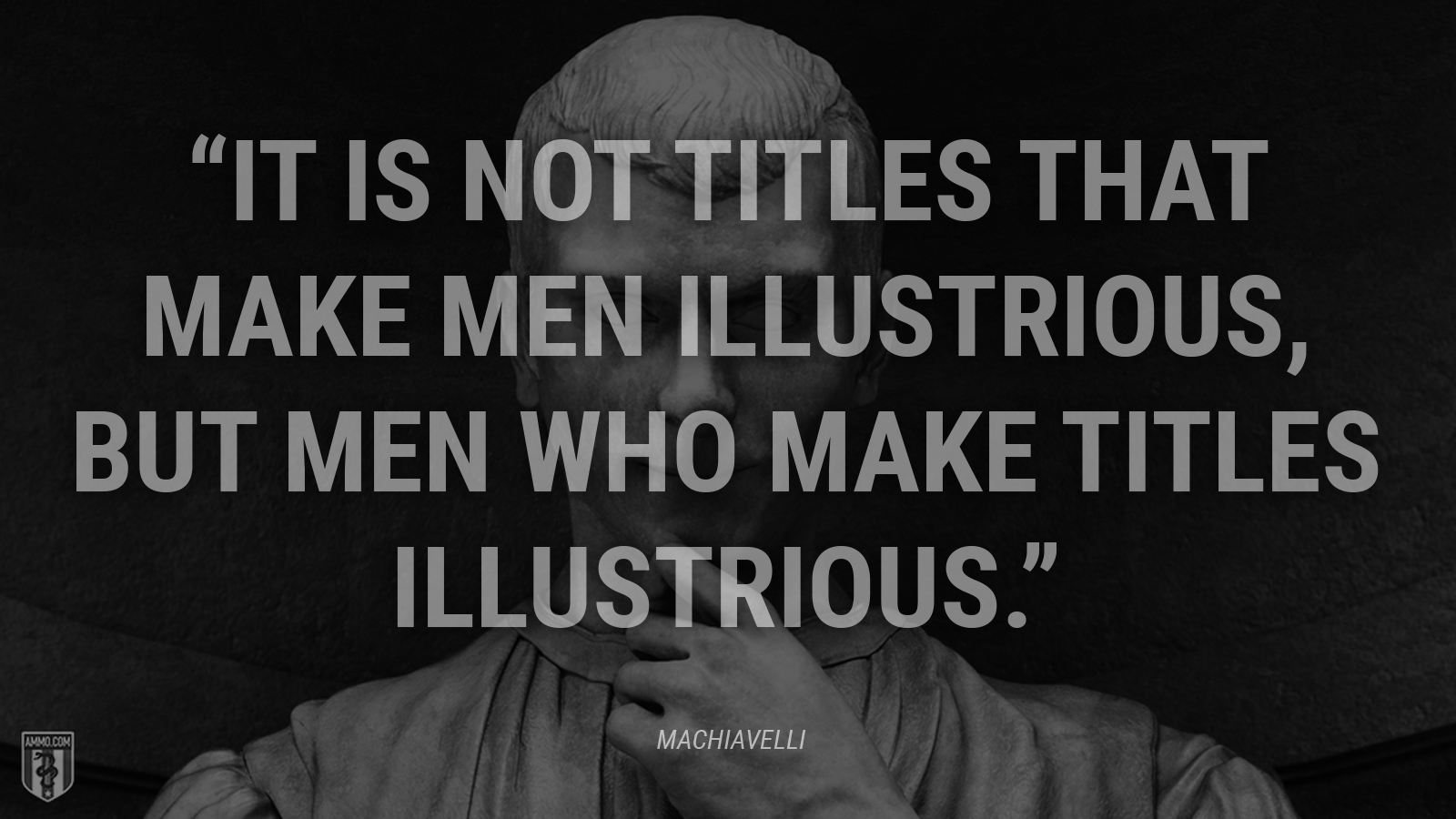 “It is not titles that make men illustrious, but men who make titles illustrious.”

Translation: “I conclude, then, that so long as Fortune varies and men stand still, they will prosper while they suit the times, and fail when they do not. But I do feel this: That it is better to be rash than timid, for Fortune is a woman, and the man who wants to hold her down must beat and bully her. We see that she yields more often to men of this stripe than to those who come coldly toward her.”

“It is the cause, and not the death, that makes the martyr.”

“Mohammed Ali worked his butt off. I saw it first hand. I remember there was a sports writer in the gym when Ali was working out doing sit-ups. He asked Ali, "How many sit-ups do you do?", and he said, "I don't start counting until it hurts." Now think about that, he doesn't start counting sit-ups until he feels pain. That's when he starts counting. That is working hard. So you can't get around the hard work, it doesn't matter who you are. Work your a** off. There is no magic pill. There is no magic out there. You can not get around, you have to work and work - it's all hard work.” 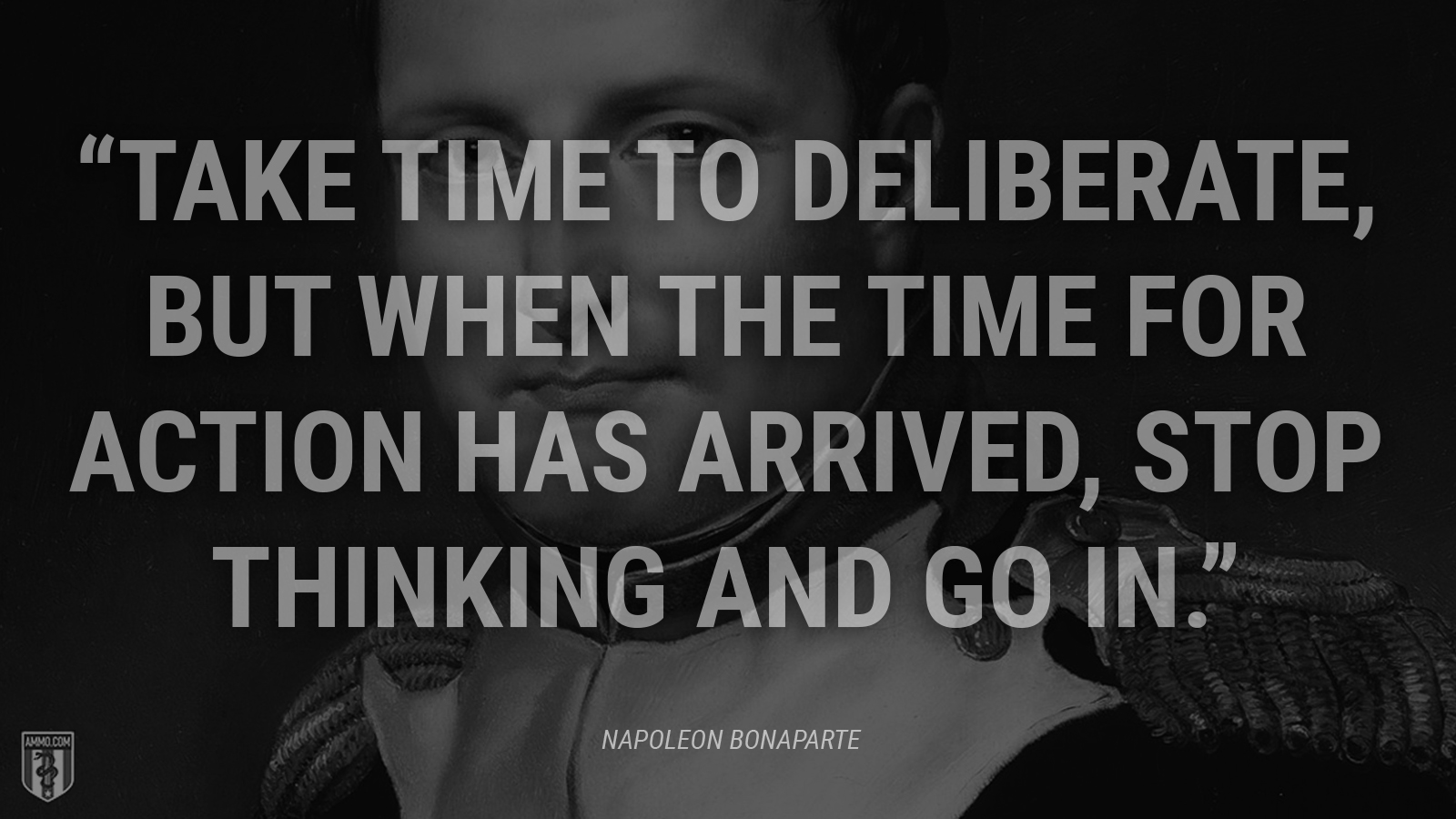 “Take time to deliberate, but when the time for action has arrived, stop thinking and go in.”

“Be grateful for adversity, for it forces the human spirit to grow - for surely, the human character is formed not in the absence of difficulty but in our response to difficulty.”

“When heaven is about to confer a great responsibility on any man, it will exercise his mind with suffering, subject his sinews and bones to hard work, expose his body to hunger, put him to poverty, place obstacles in the paths of his deeds, so as to stimulate his mind, harden his nature, and improve wherever he is incompetent.”

“It can also be very powerful to experiment with not moving (when in pain or dealing with other discomfort when meditating). To try just totally surrounding to whatever sensation is there. Because there will come a time in any life where physical pain is unavoidable. And this (meditation) is a very good practice for finding equanimity in those moments. That feeling that you cannot bear a sensation, whether it's pain or some other unpleasant feeling, is never quite true. Because in that moment you've already borne it. What's really happening is you're afraid of the next moment. And it is possible to find true equanimity in the midst of even very unpleasant sensations. And this can be an extremely powerful experience.” 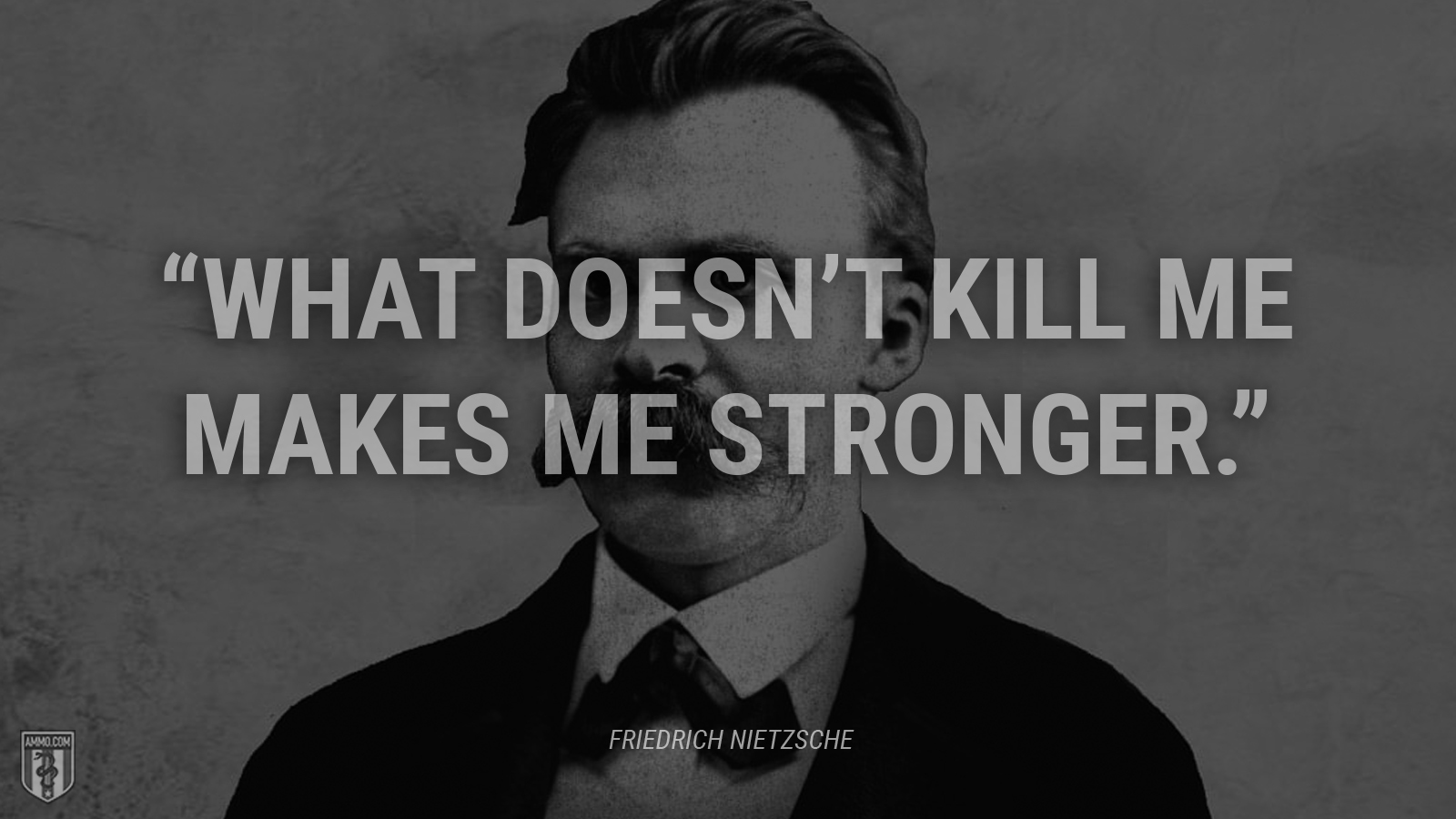 “What doesn’t kill me makes me stronger.”

“Not only so, but we also glory in our sufferings, because we know that suffering produces perseverance; perseverance, character; and character, hope.” 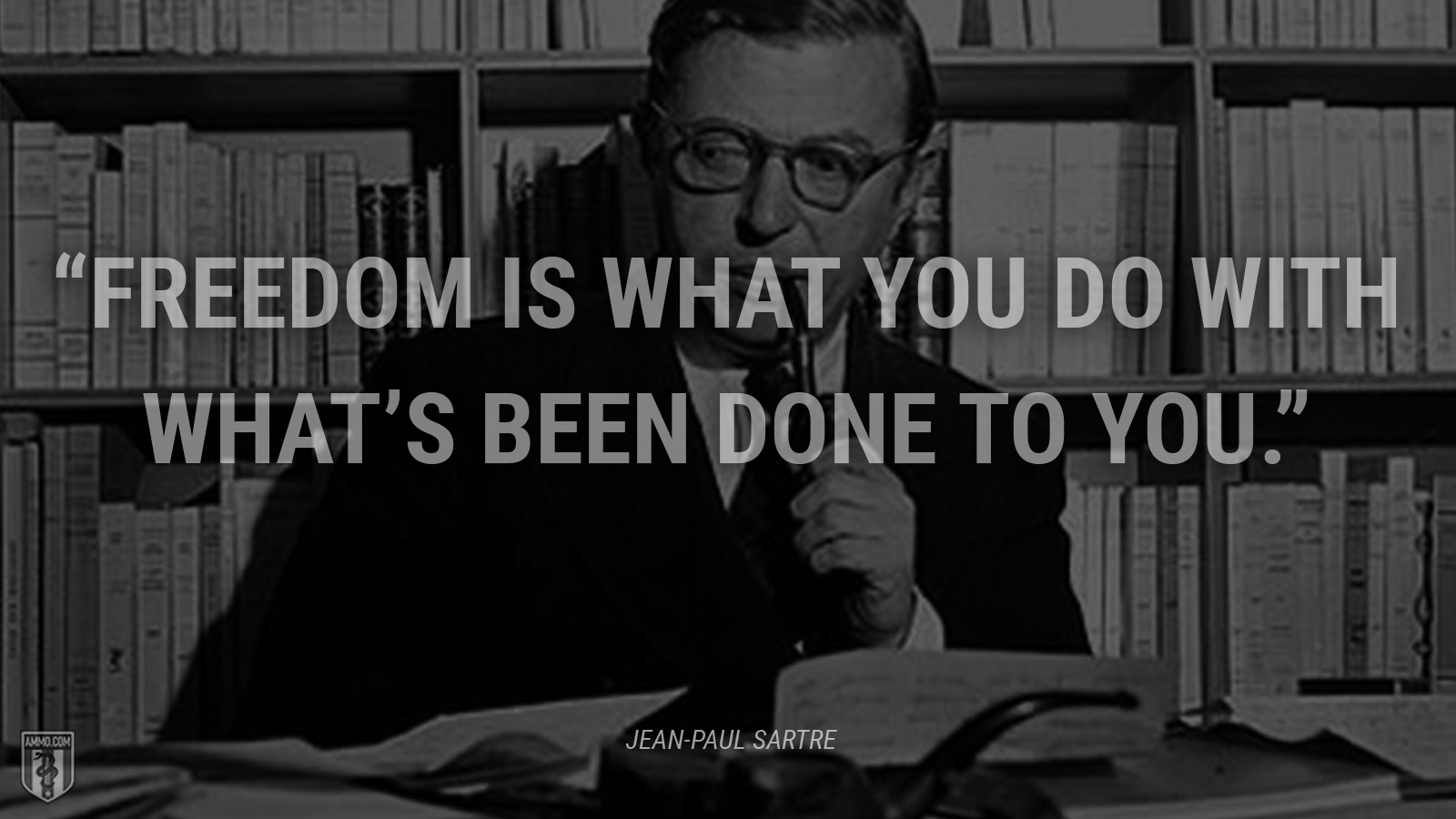 “Freedom is what you do with what’s been done to you.”

“...necessity of obliging every citizen to be a souldier. this was the case with the Greeks & Romans and must be that of every free state. ”