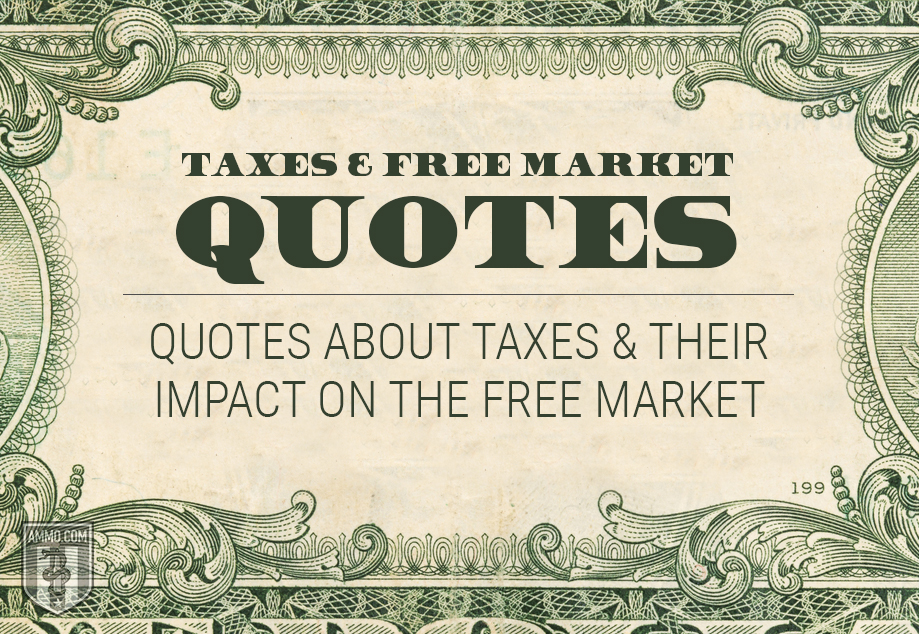 Like death, taxes are something one can't avoid – and they have served as a flashpoint for Americans since before there even was an America. "Taxation without representation" was the rallying cry for the colonists in Boston when they tossed British tea into the harbor in protest of the Crown.

Unlike a monarch, many politicians today borrow money against future tax revenue, and are personally disconnected from the obligation to pay it back. This means they can pander to one group at the expense of another – or at the expense of future generations.

With these thoughts in mind, below are some of our favorite quotes on taxation and how it impacts the free market. 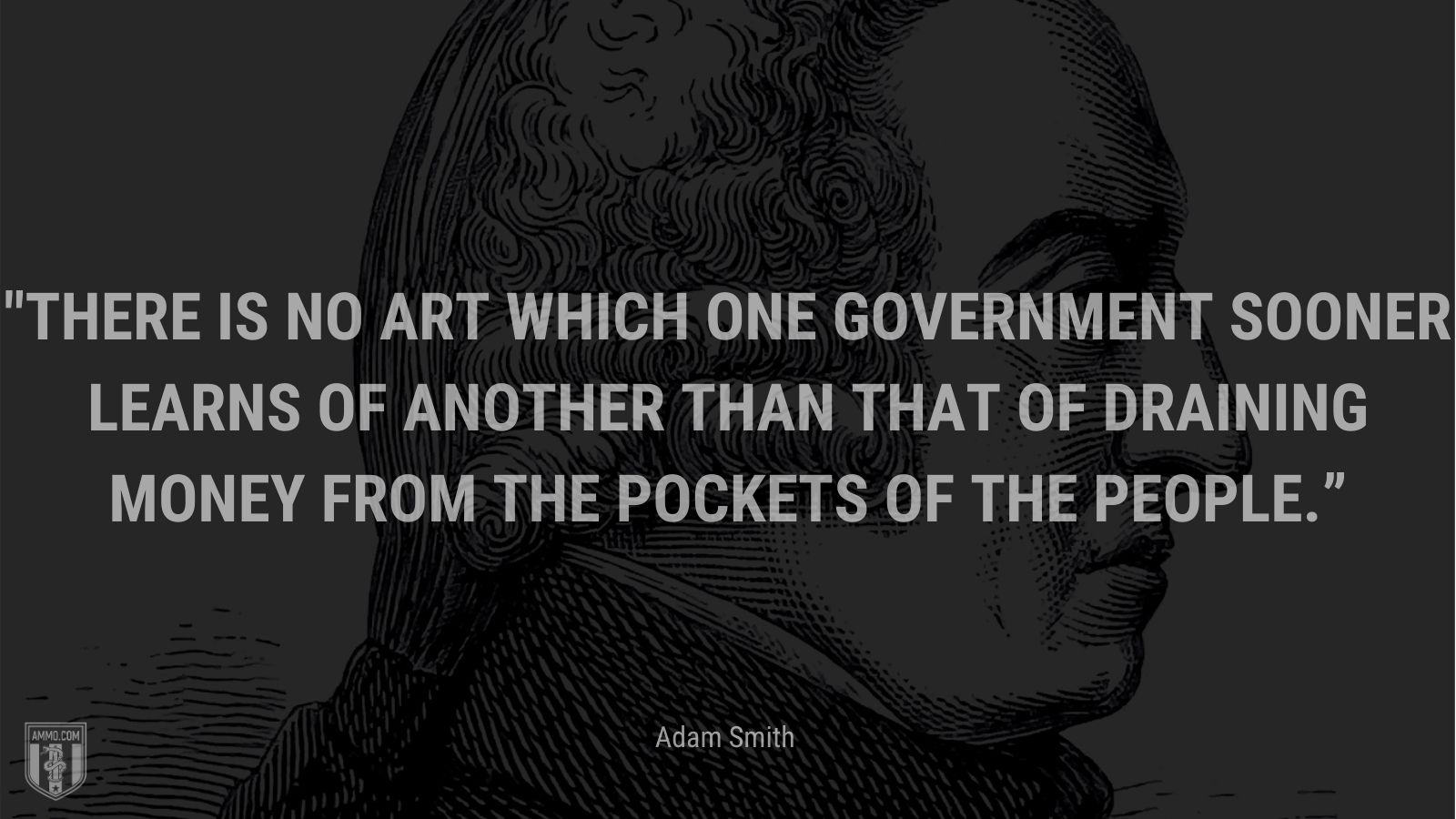 “There is no art which one government sooner learns of another than that of draining money from the pockets of the people.” 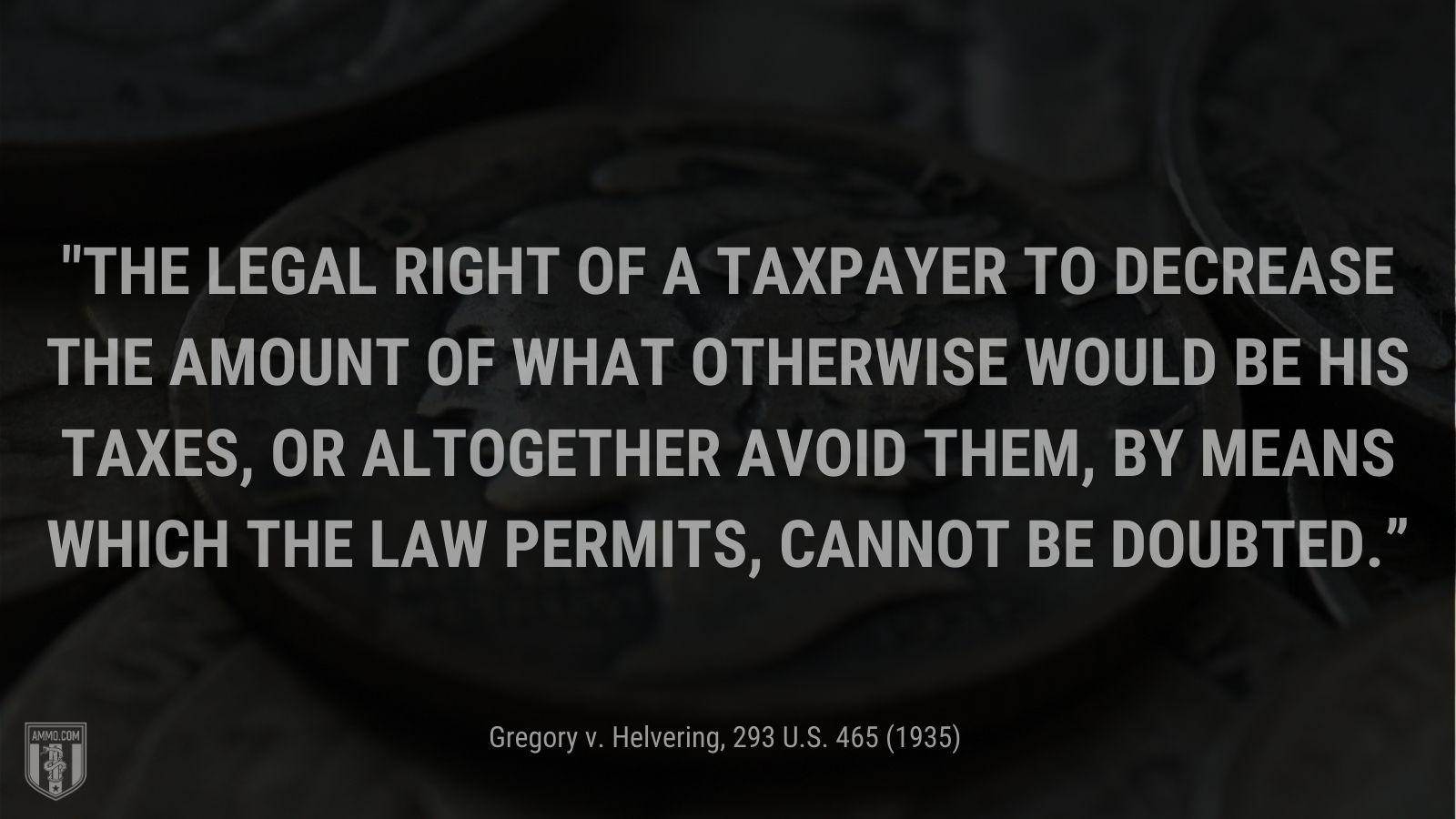 “The legal right of a taxpayer to decrease the amount of what otherwise would be his taxes, or altogether avoid them, by means which the law permits, cannot be doubted.” 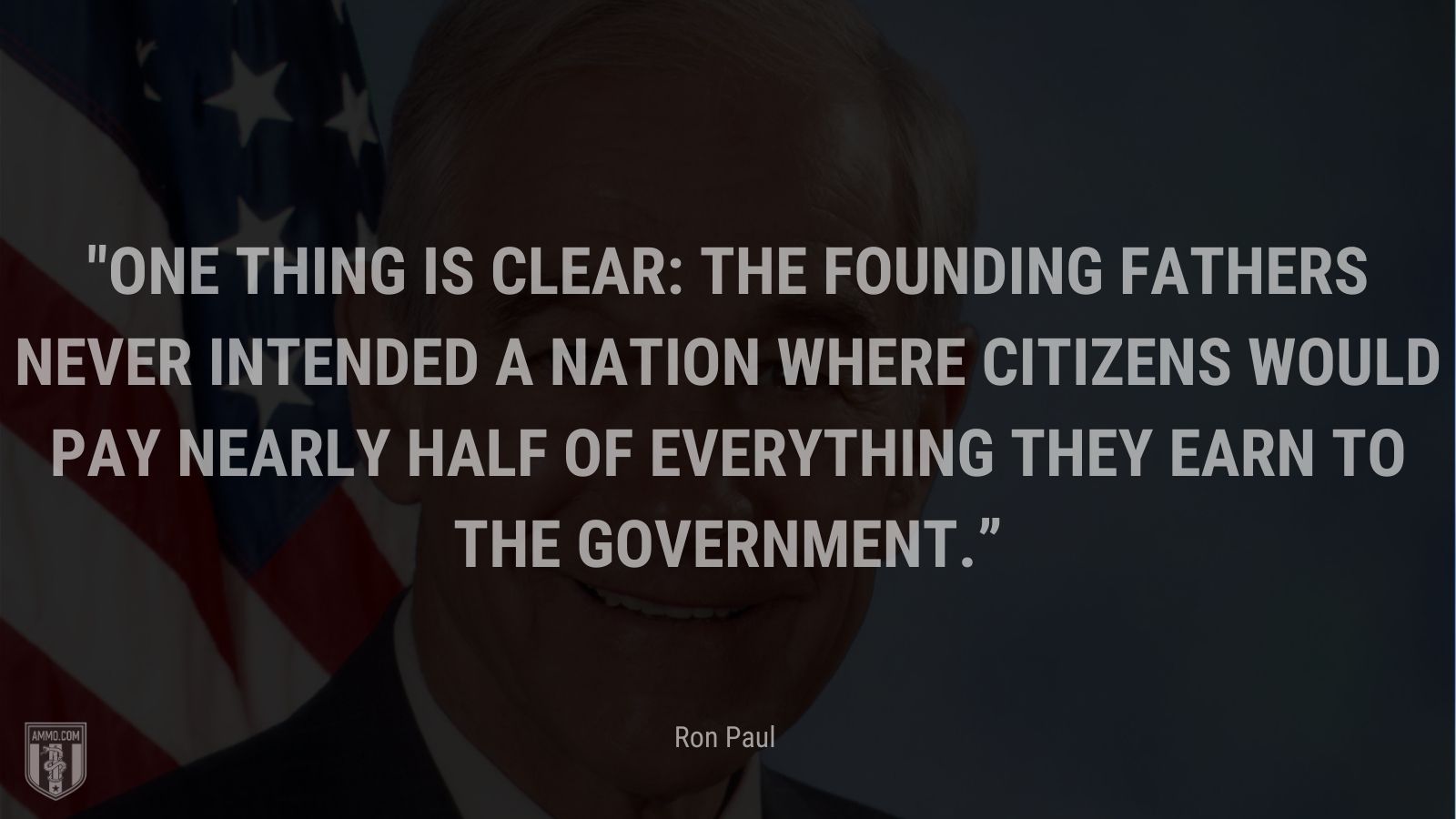 “One thing is clear: The Founding Fathers never intended a nation where citizens would pay nearly half of everything they earn to the government.” 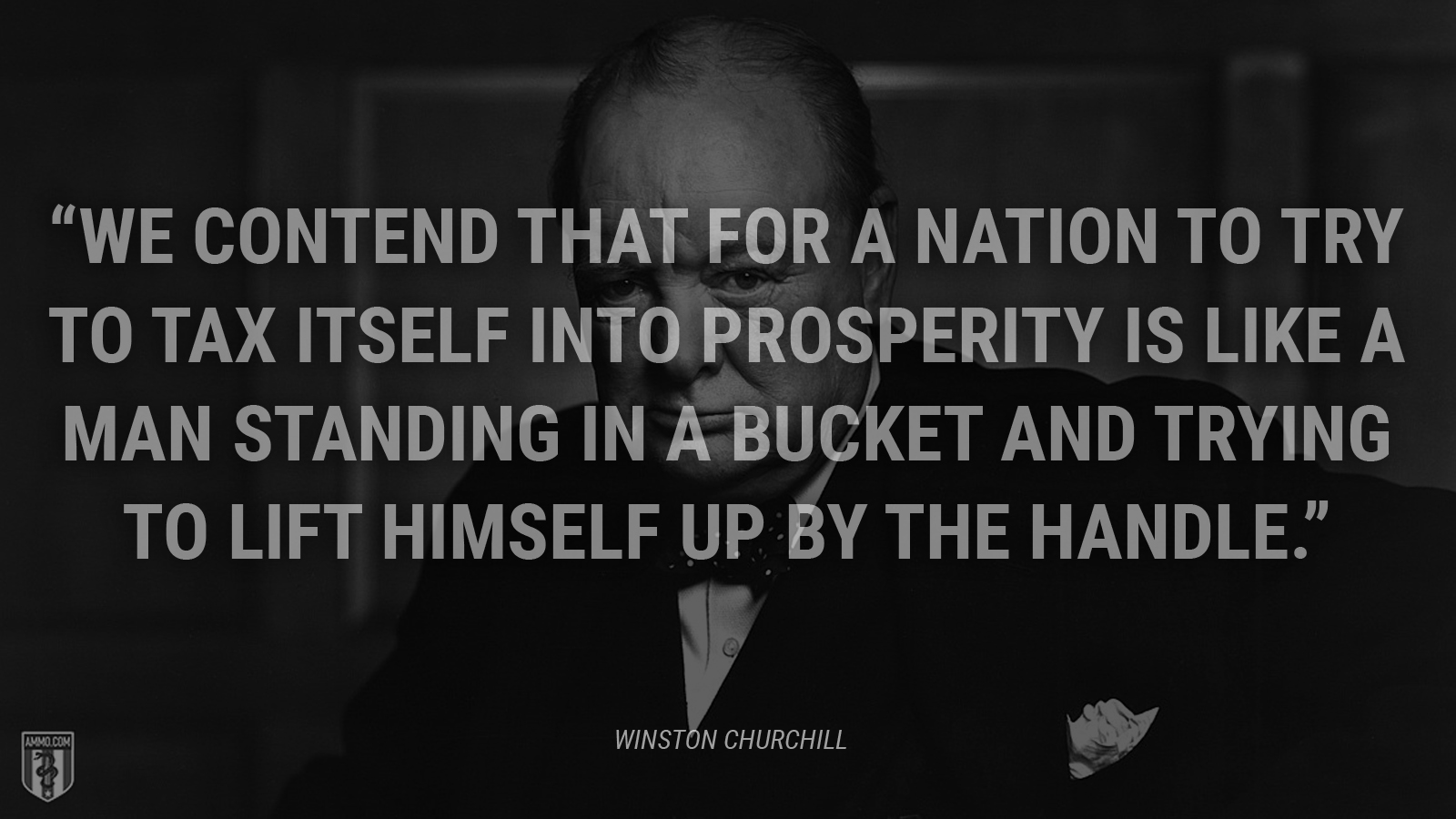 “We contend that for a nation to try to tax itself into prosperity is like a man standing in a bucket and trying to lift himself up by the handle.” 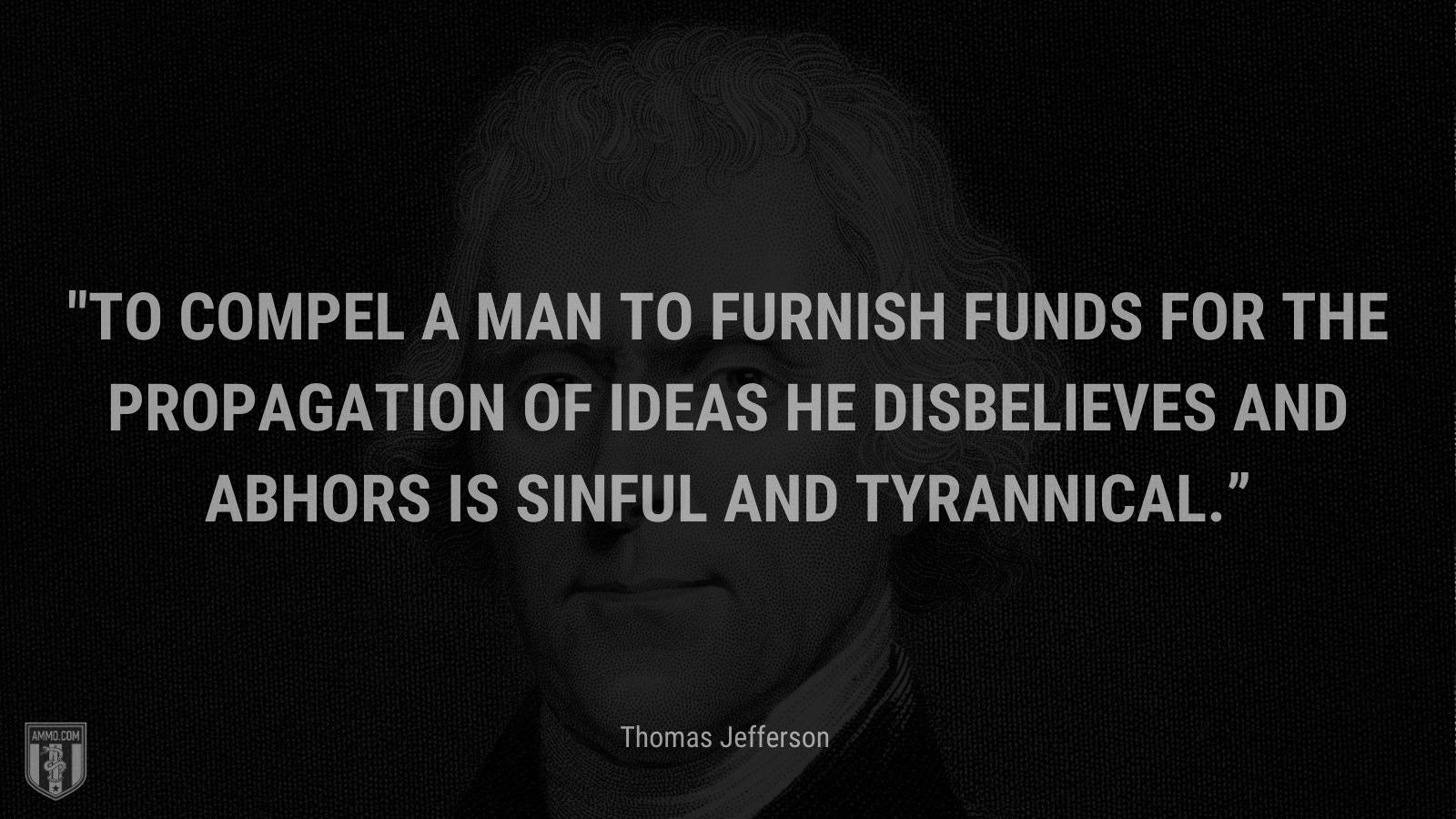 “To compel a man to furnish funds for the propagation of ideas he disbelieves and abhors is sinful and tyrannical.” 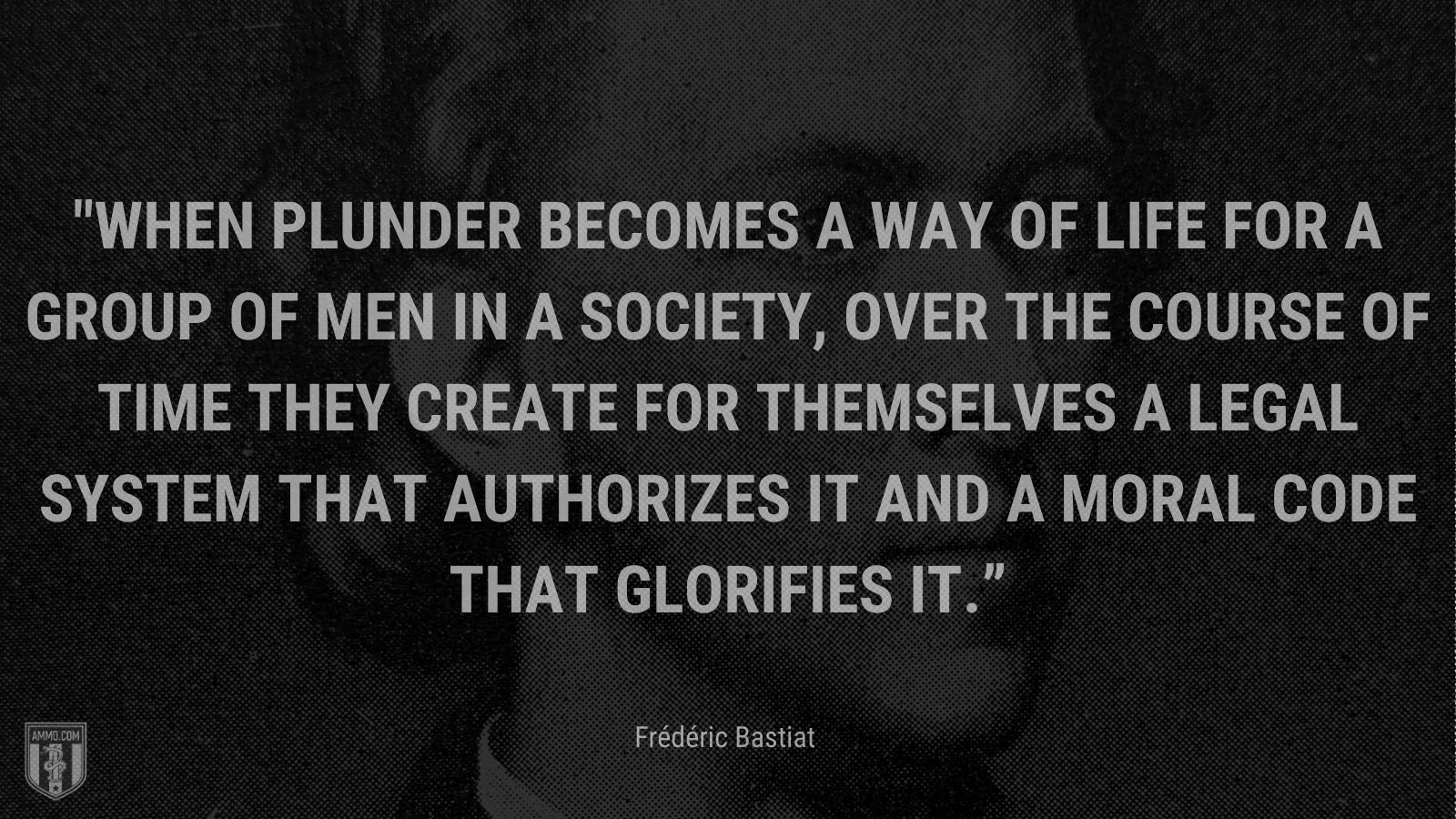 “When plunder becomes a way of life for a group of men in a society, over the course of time they create for themselves a legal system that authorizes it and a moral code that glorifies it.” 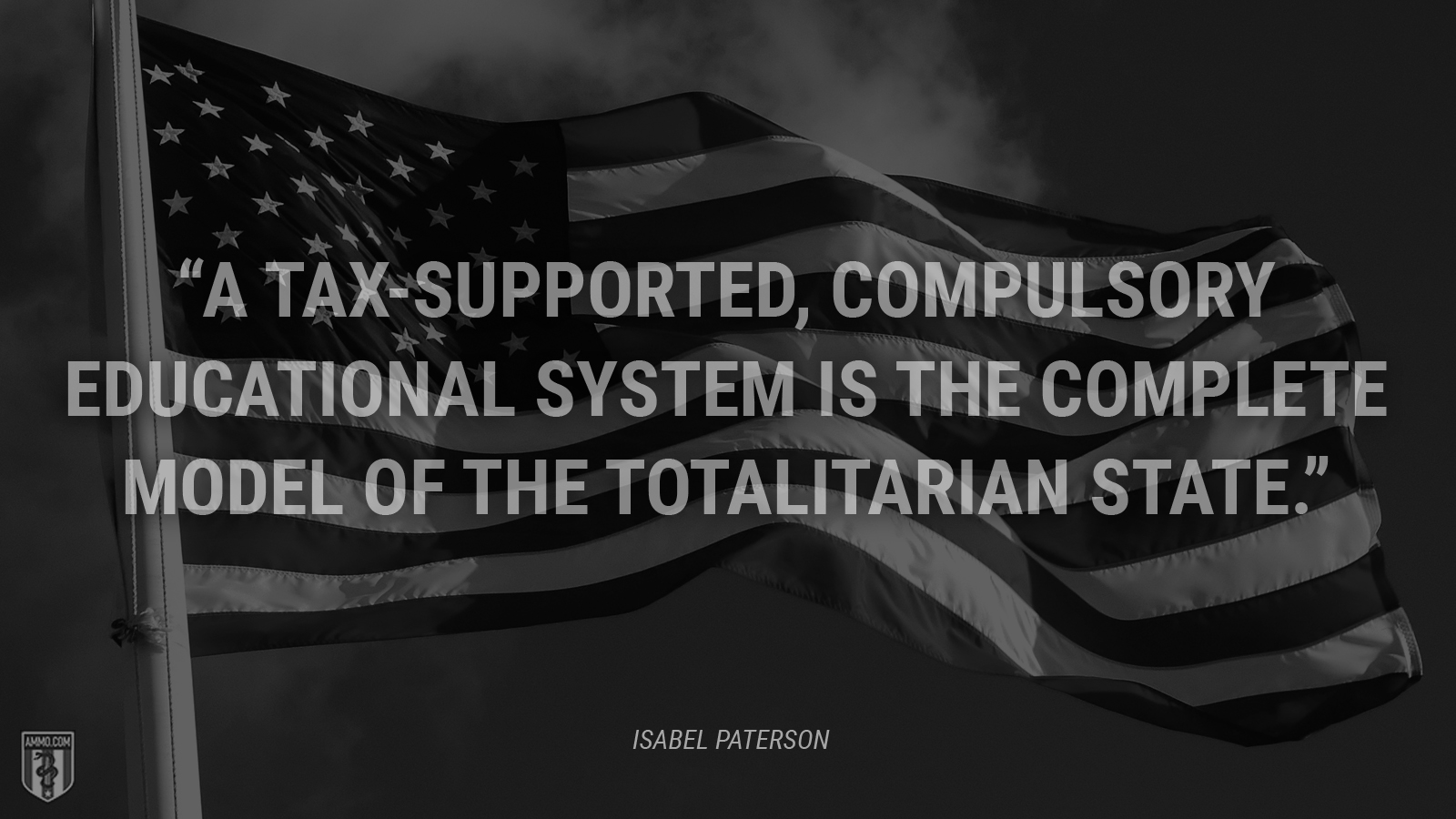 “A tax-supported, compulsory educational system is the complete model of the totalitarian state.” 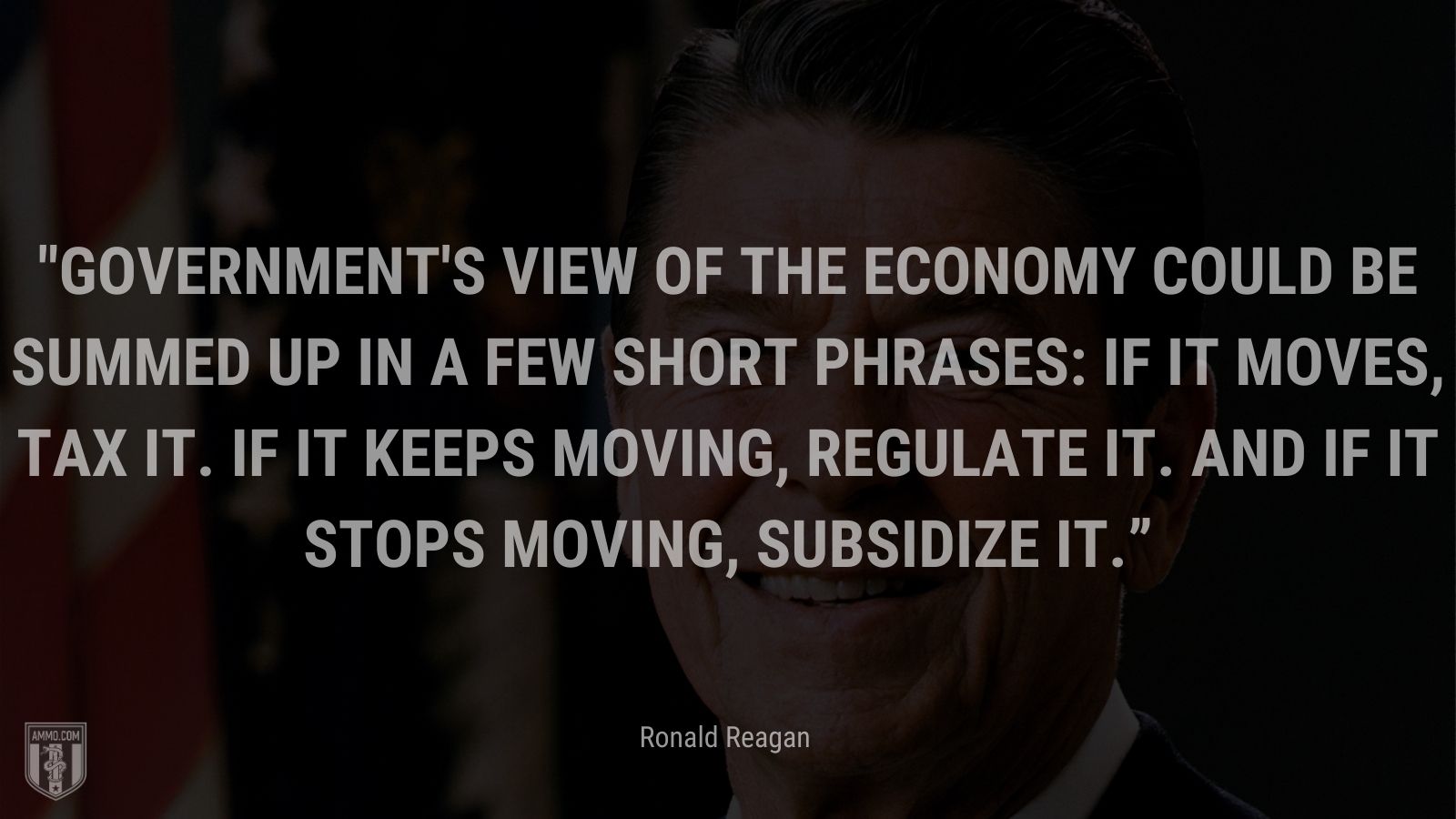 “Government's view of the economy could be summed up in a few short phrases: If it moves, tax it. If it keeps moving, regulate it. And if it stops moving, subsidize it.” 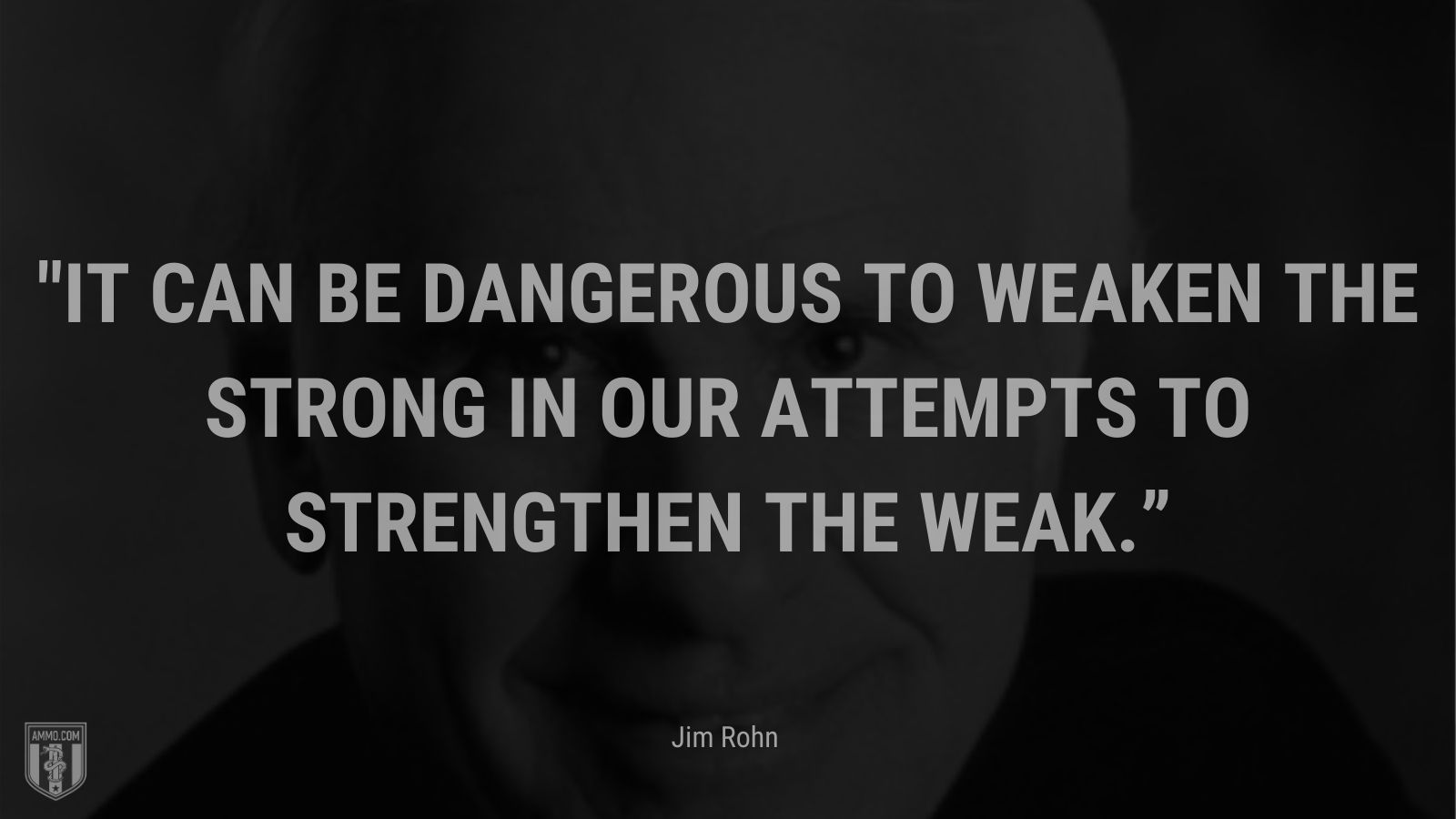 “It can be dangerous to weaken the strong in our attempts to strengthen the weak.” 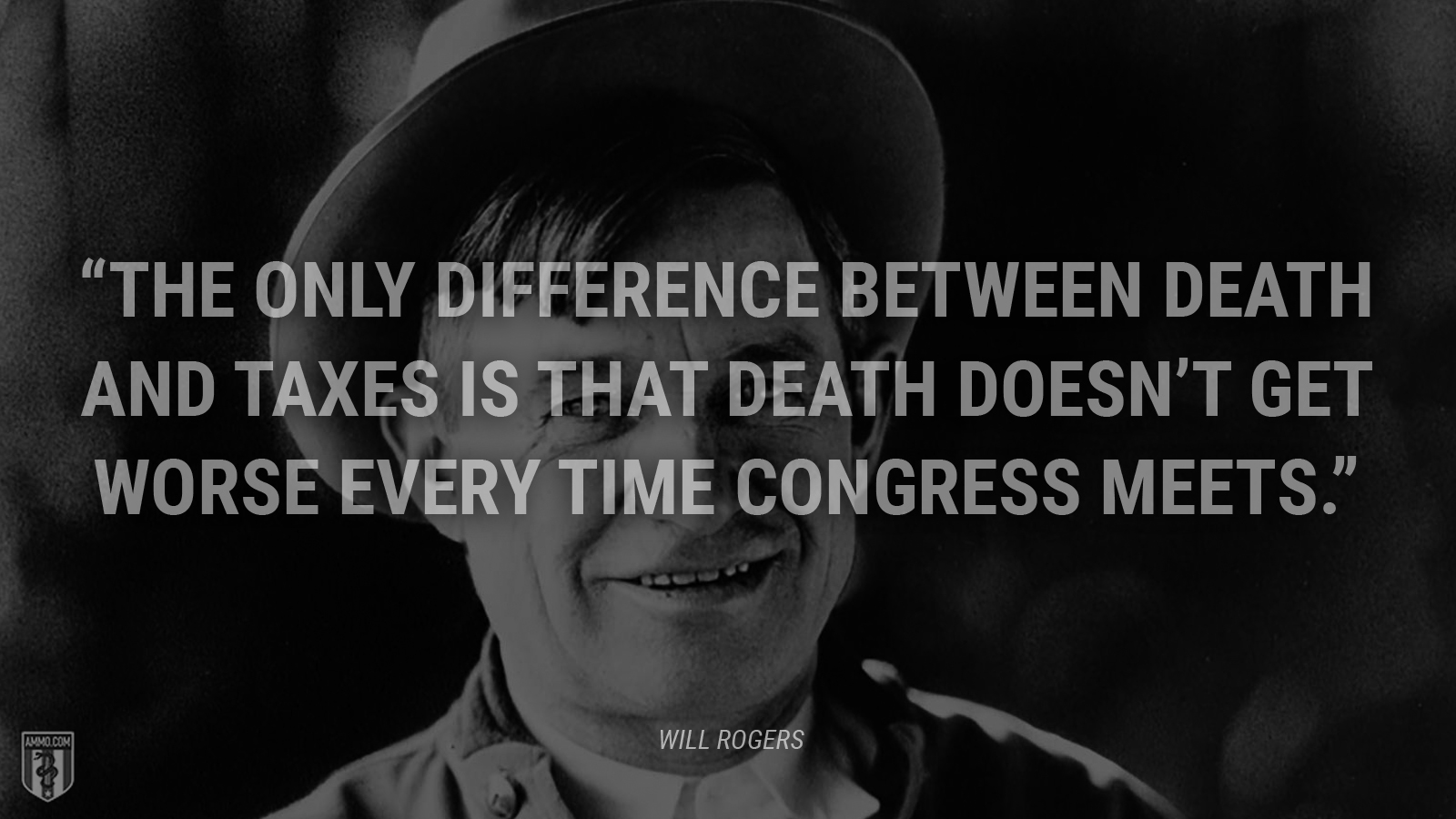 “The only difference between death and taxes is that death doesn’t get worse every time Congress meets.” 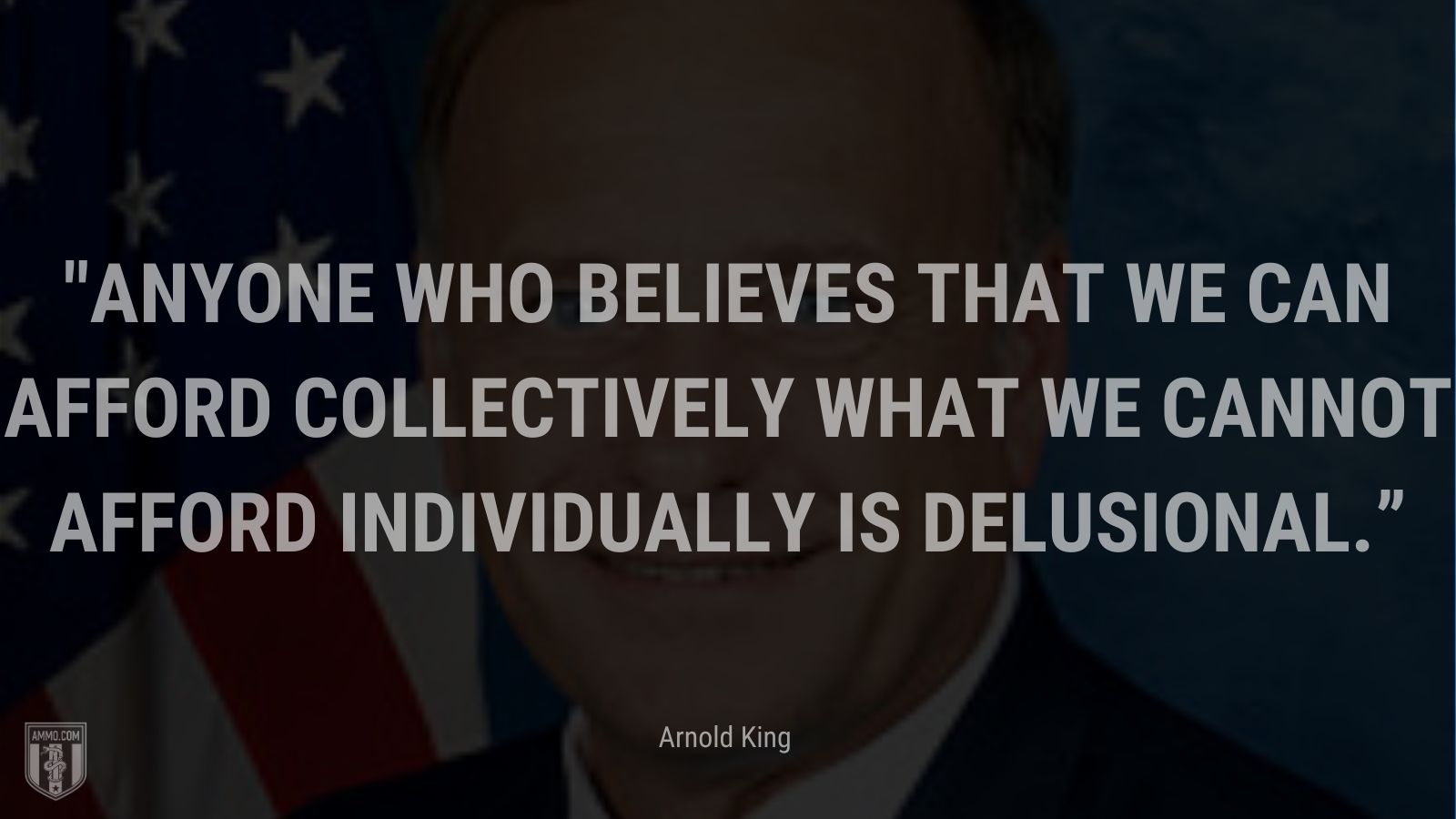 “Anyone who believes that we can afford collectively what we cannot afford individually is delusional.” 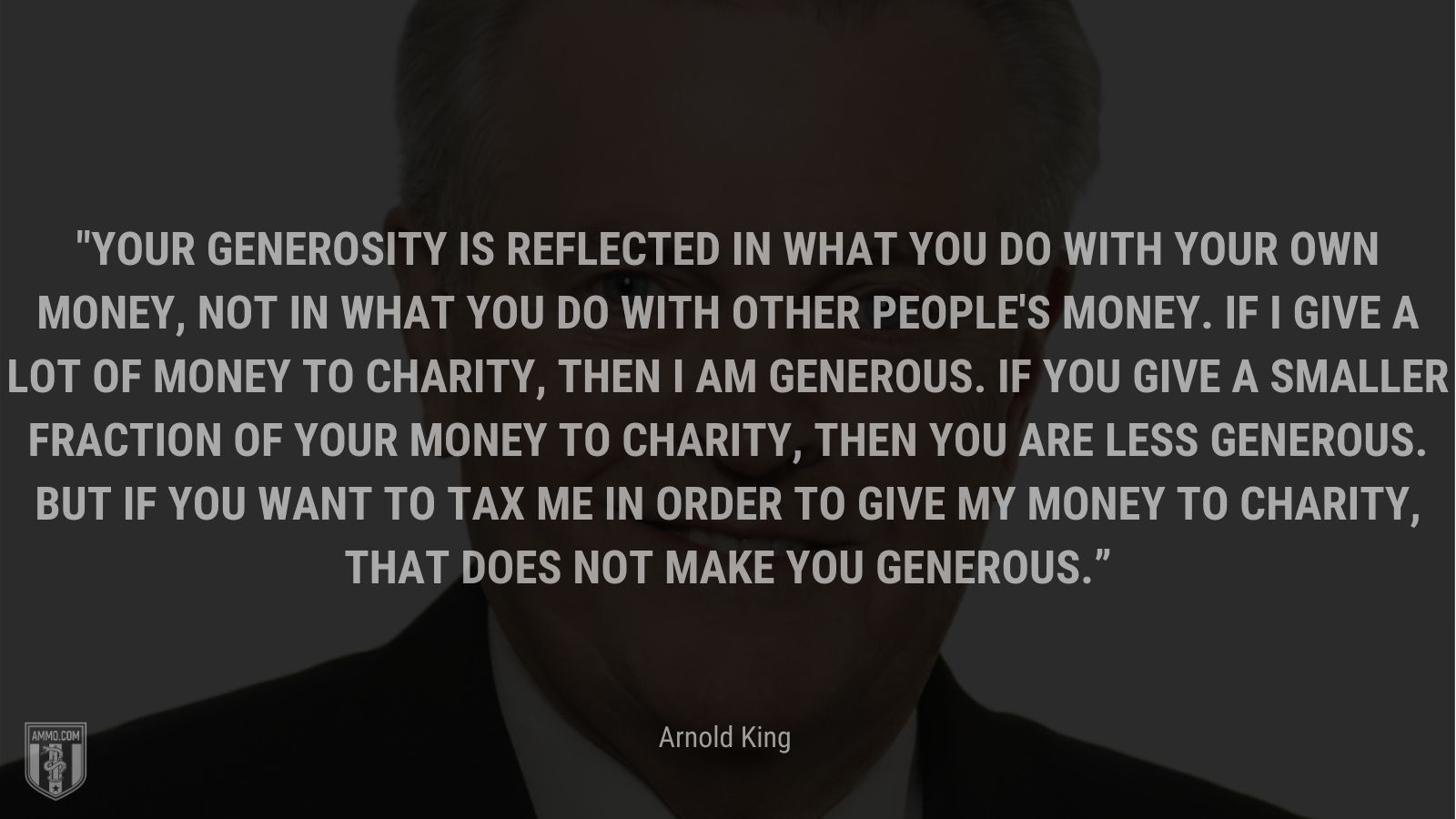 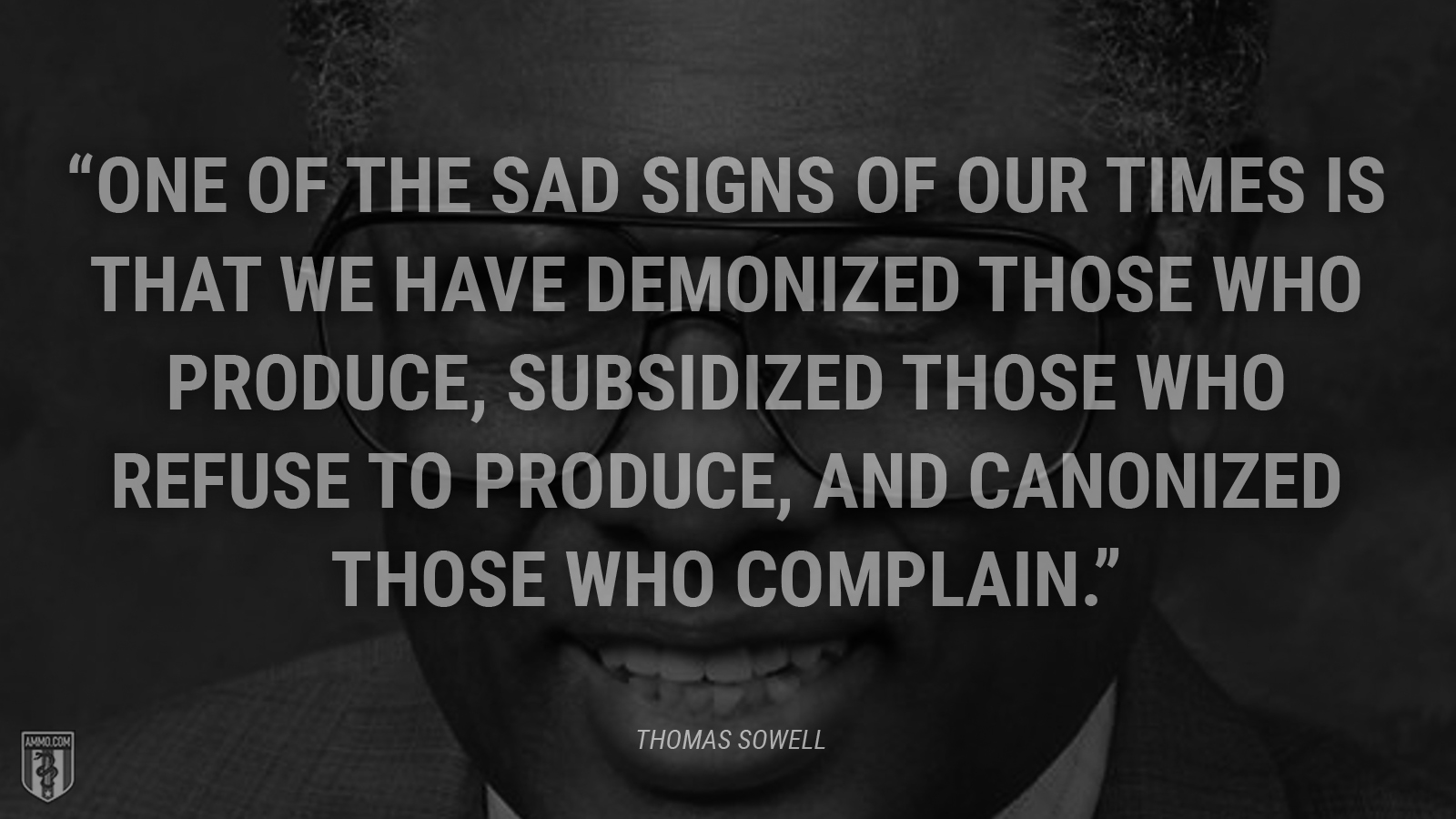 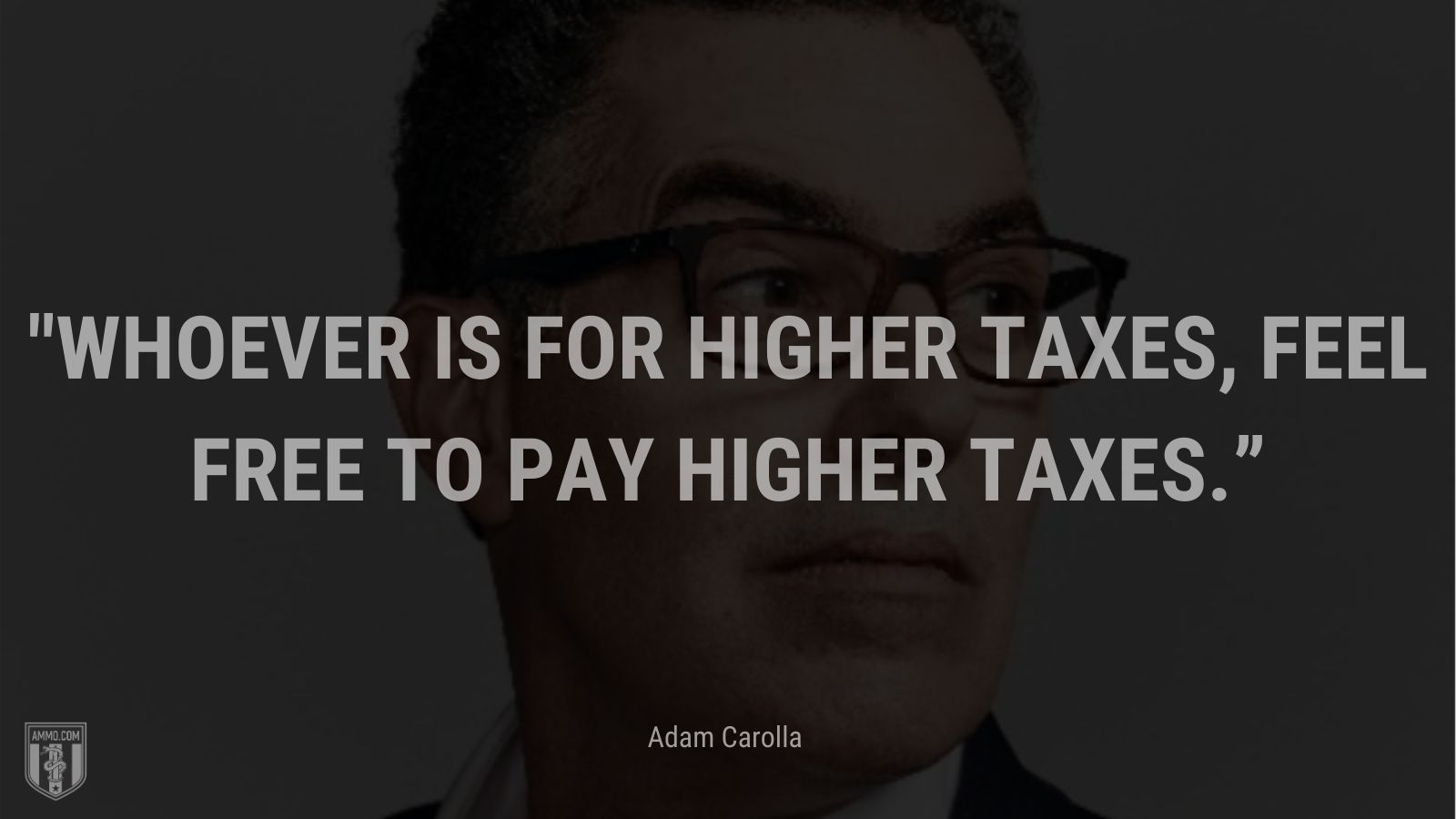 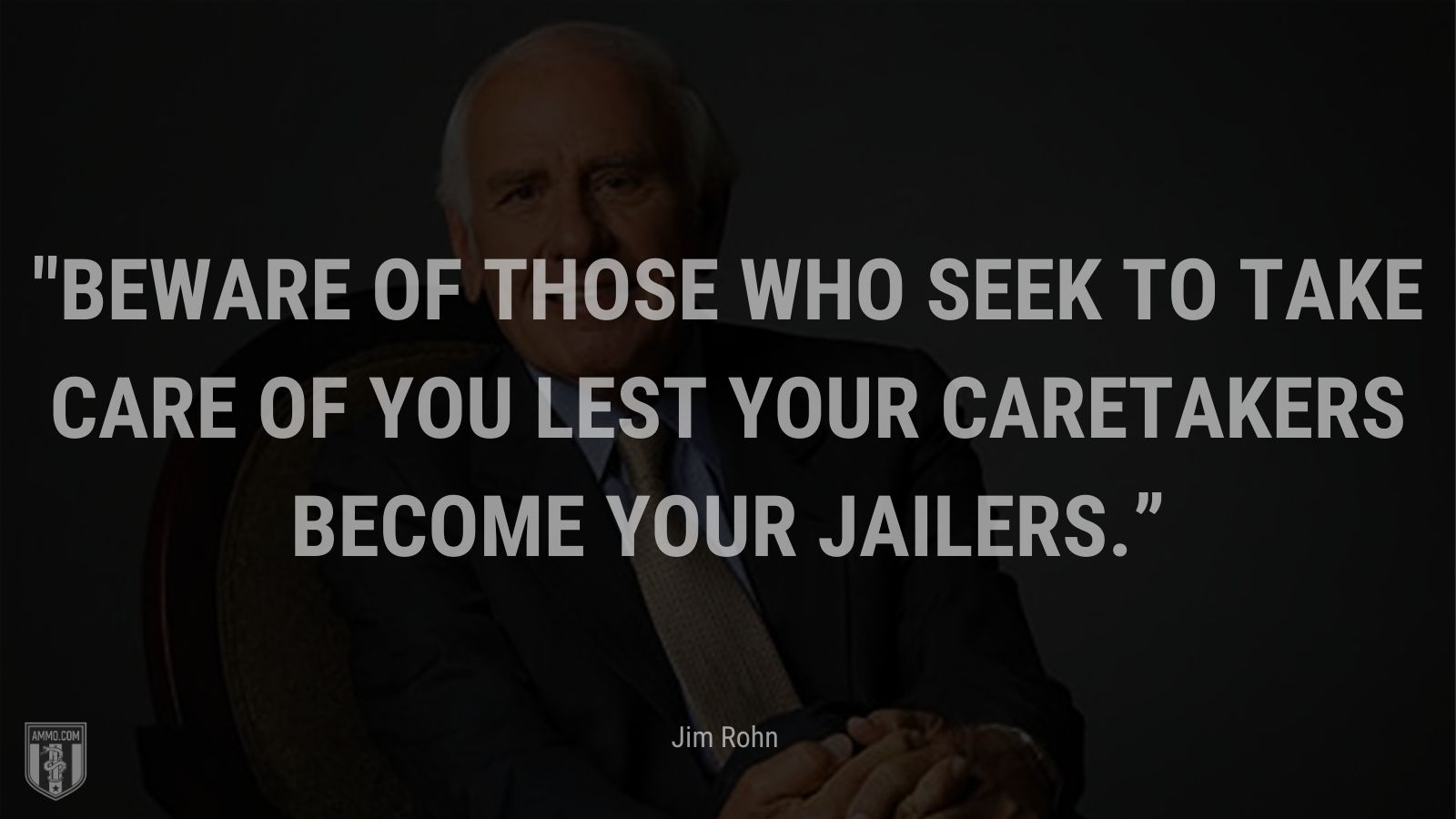 “Beware of those who seek to take care of you lest your caretakers become your jailers.” 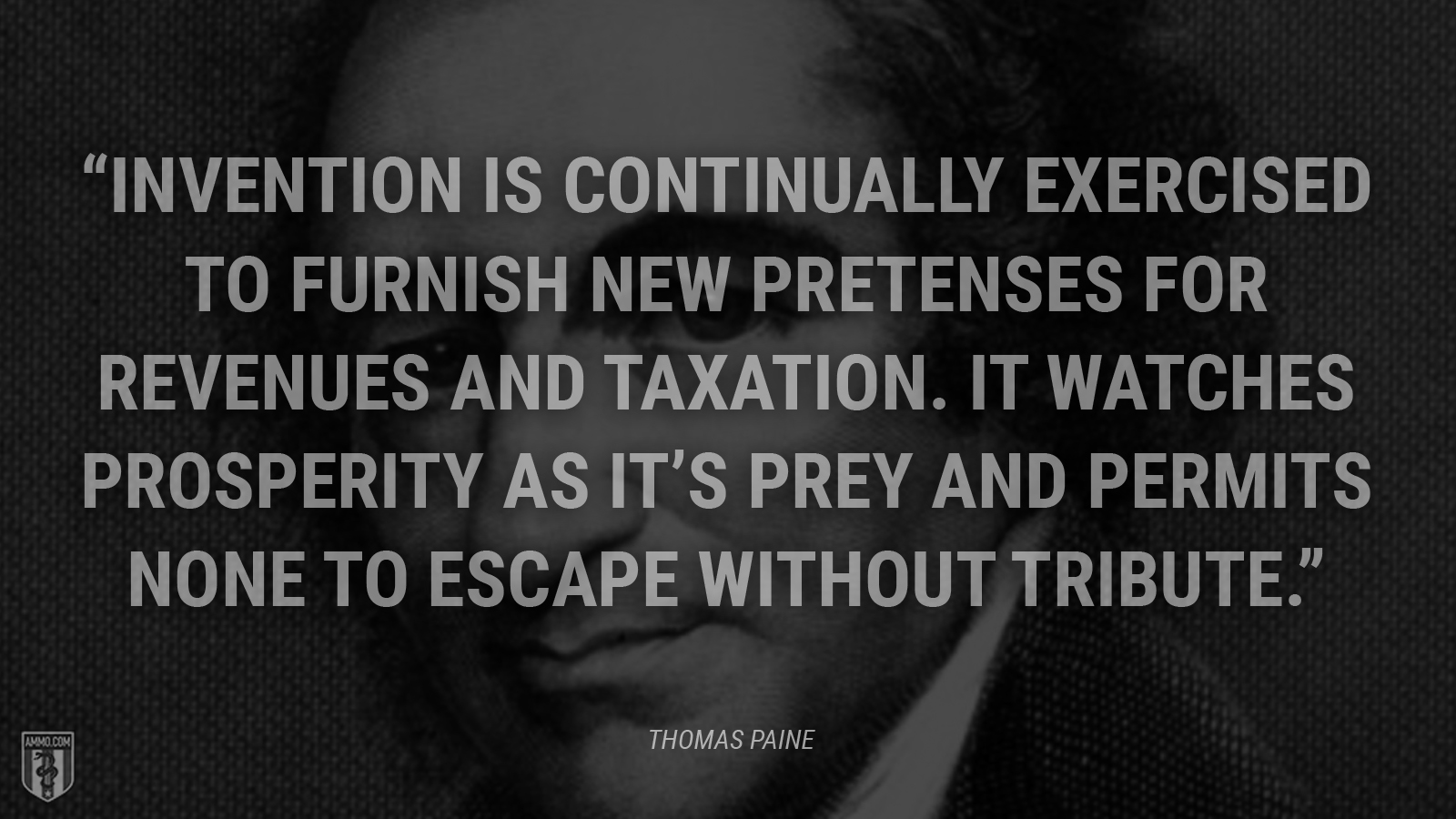 “Invention is continually exercised to furnish new pretenses for revenues and taxation. It watches prosperity as it’s prey and permits none to escape without tribute.” 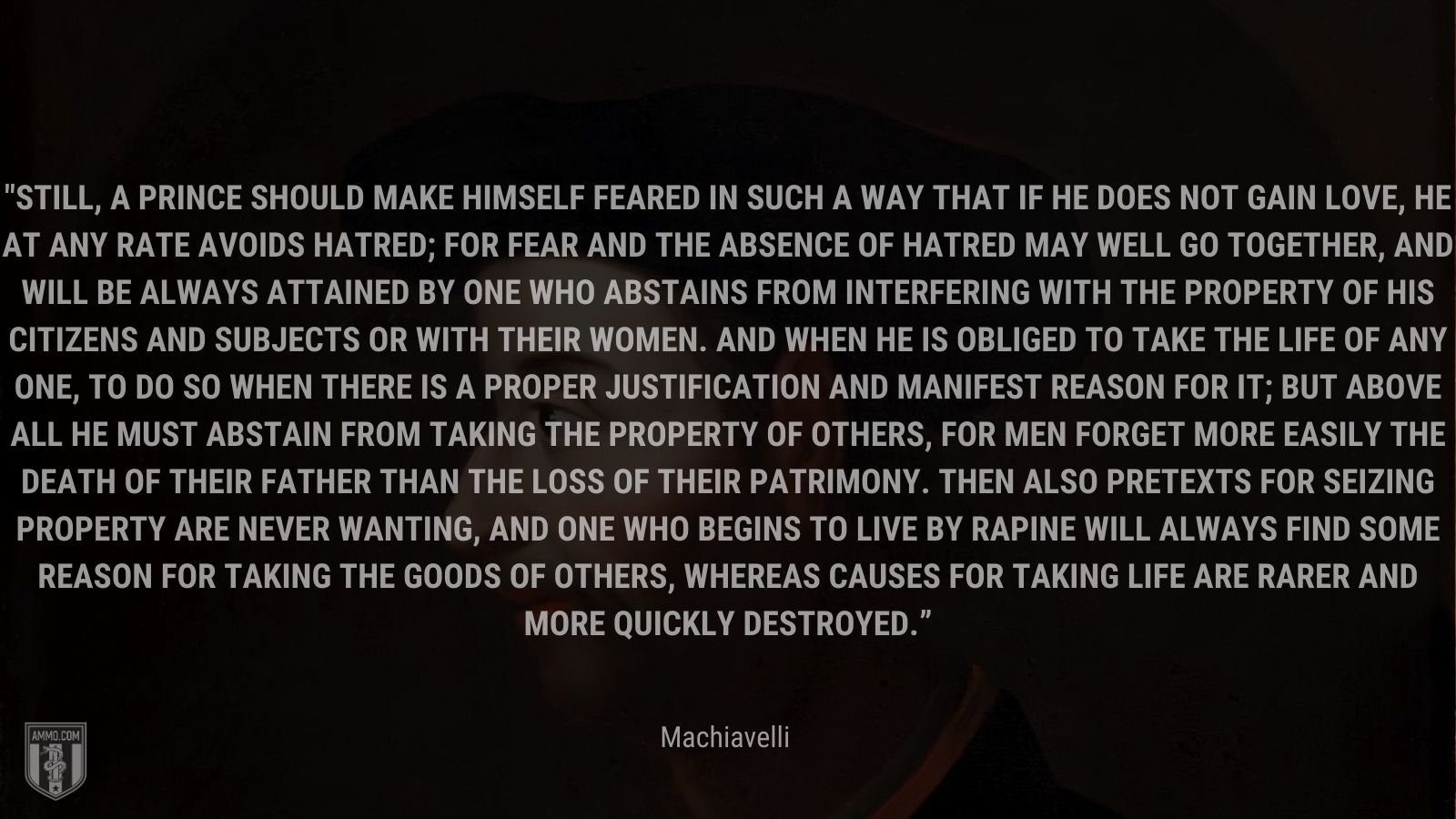 “Still, a prince should make himself feared in such a way that if he does not gain love, he at any rate avoids hatred; for fear and the absence of hatred may well go together, and will be always attained by one who abstains from interfering with the property of his citizens and subjects or with their women. And when he is obliged to take the life of any one, to do so when there is a proper justification and manifest reason for it; but above all he must abstain from taking the property of others, for men forget more easily the death of their father than the loss of their patrimony. Then also pretexts for seizing property are never wanting, and one who begins to live by rapine will always find some reason for taking the goods of others, whereas causes for taking life are rarer and more quickly destroyed.” 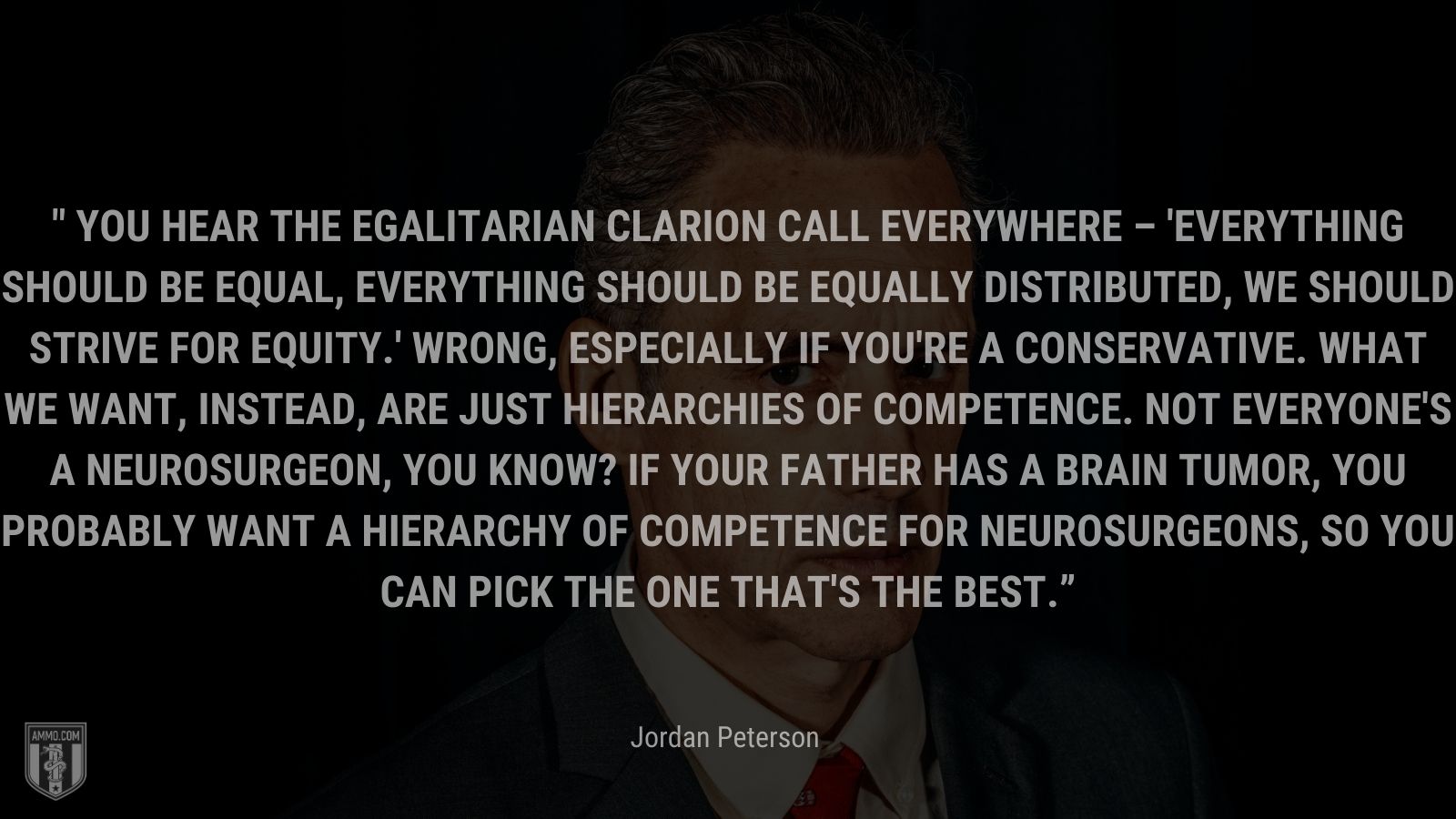 “You hear the egalitarian clarion call everywhere – 'Everything should be equal, everything should be equally distributed, we should strive for equity.' Wrong, especially if you're a conservative. What we want, instead, are just hierarchies of competence. Not everyone's a neurosurgeon, you know? If your father has a brain tumor, you probably want a hierarchy of competence for neurosurgeons, so you can pick the one that's the best. 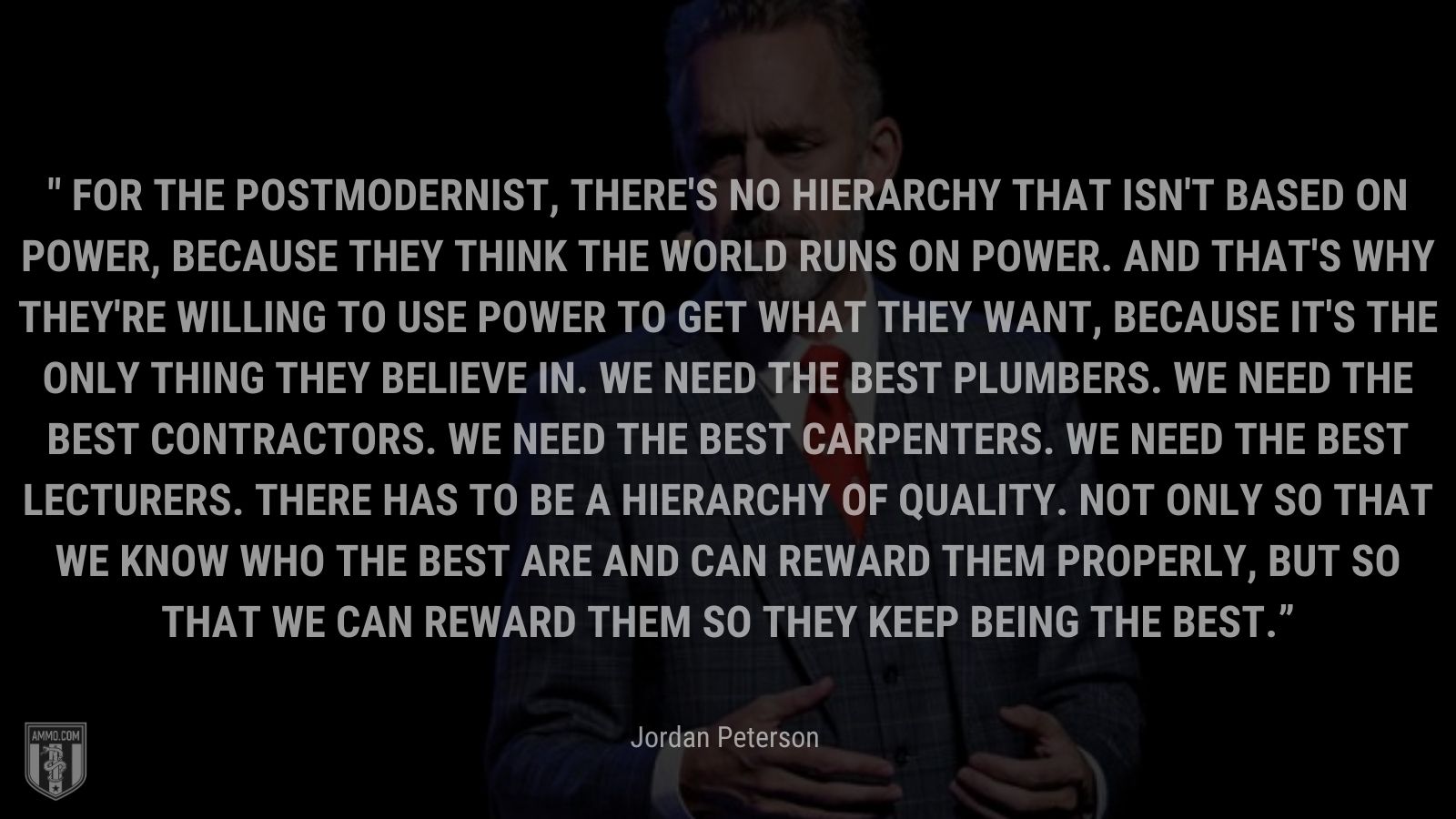 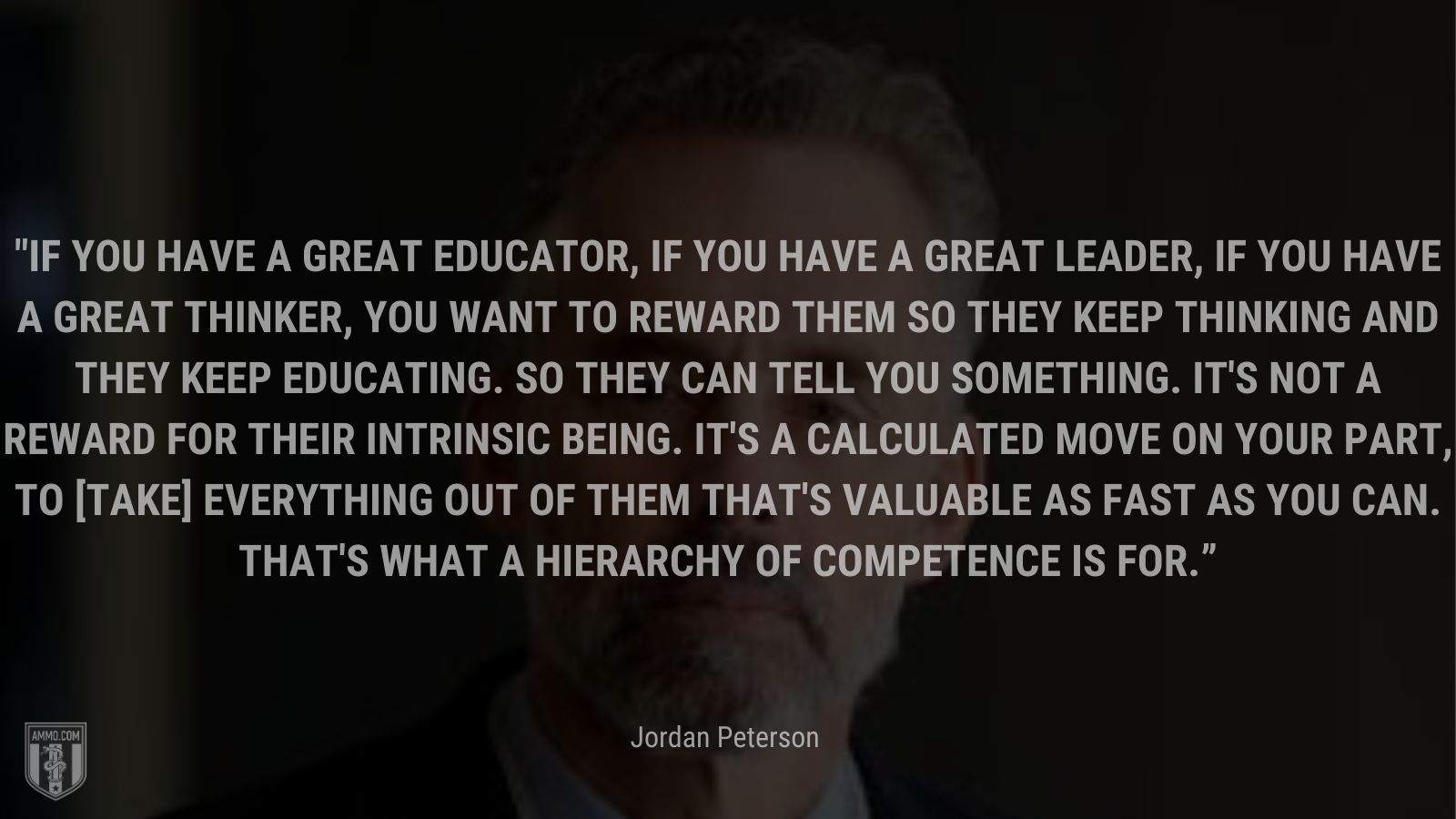 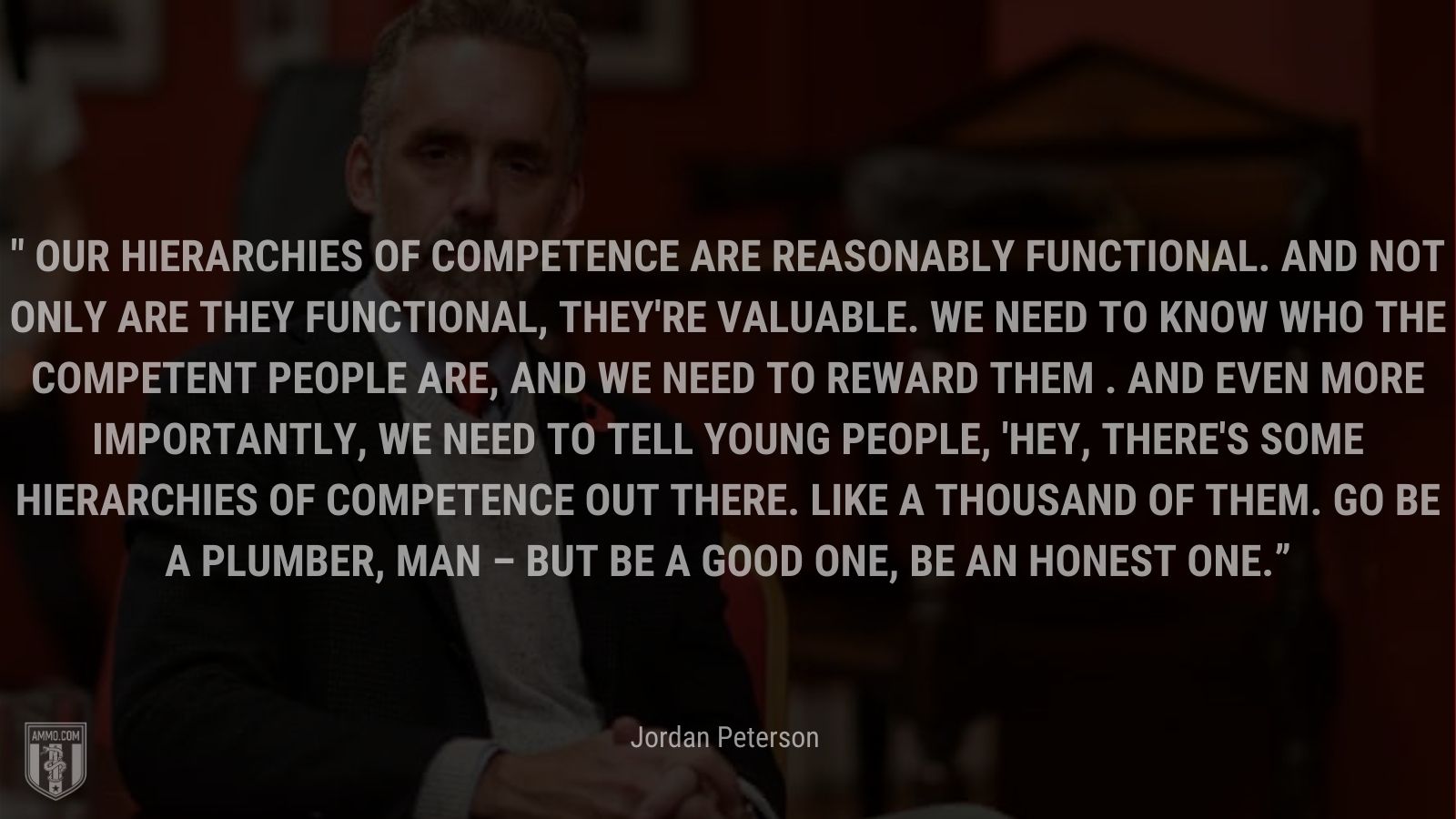 “Our hierarchies of competence are reasonably functional. And not only are they functional, they're valuable. We need to know who the competent people are, and we need to reward them. And even more importantly, we need to tell young people, 'Hey, there's some hierarchies of competence out there. Like a thousand of them. Go be a plumber, man – but be a good one, be an honest one.' 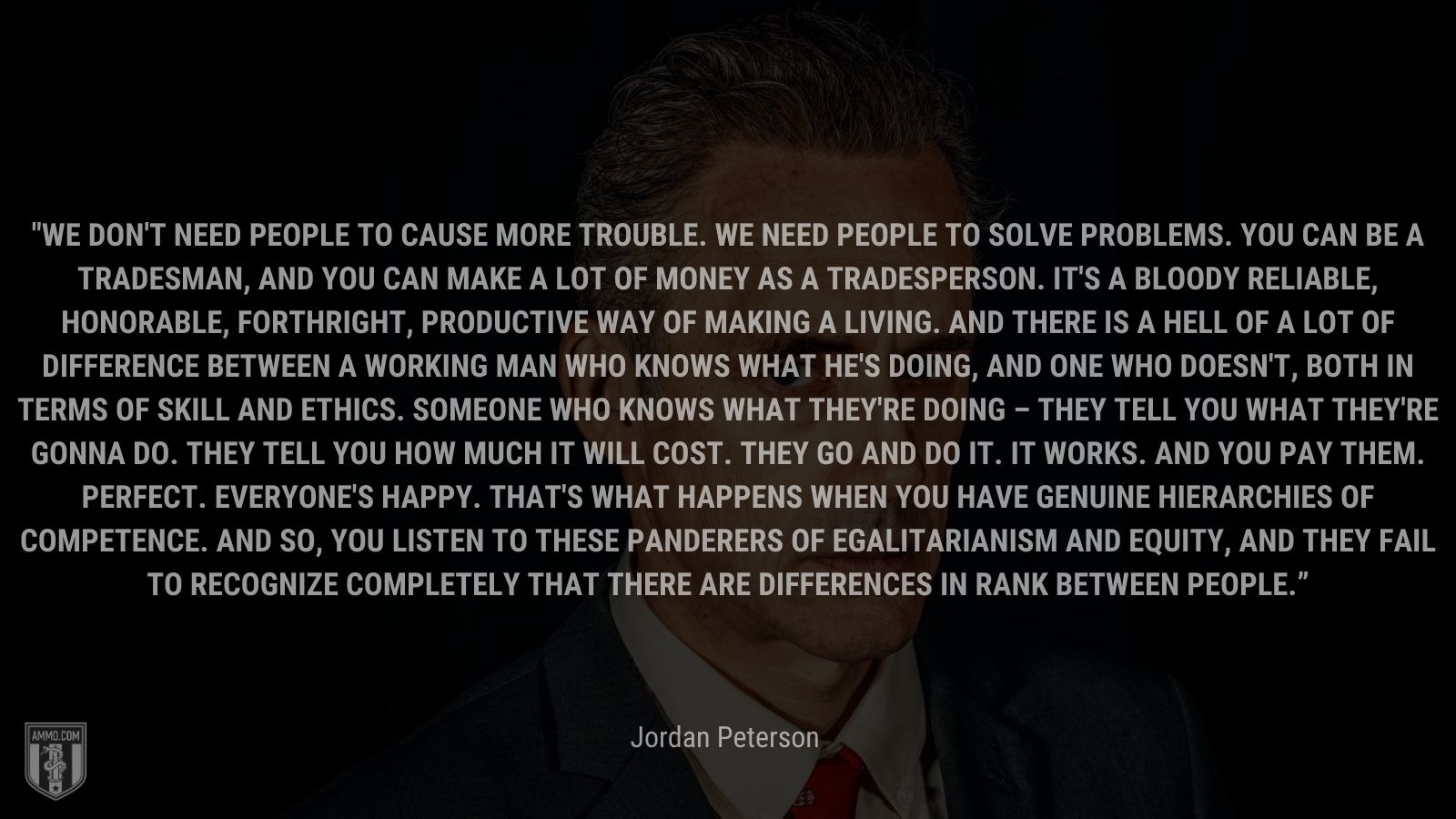 “We don't need people to cause more trouble. We need people to solve problems. You can be a tradesman, and you can make a lot of money as a tradesperson. It's a bloody reliable, honorable, forthright, productive way of making a living. And there is a hell of a lot of difference between a working man who knows what he's doing, and one who doesn't, both in terms of skill and ethics. Someone who knows what they're doing – they tell you what they're gonna do. They tell you how much it will cost. They go and do it. It works. And you pay them. Perfect. Everyone's happy. That's what happens when you have genuine hierarchies of competence. And so, you listen to these panderers of egalitarianism and equity, and they fail to recognize completely that there are differences in rank between people. 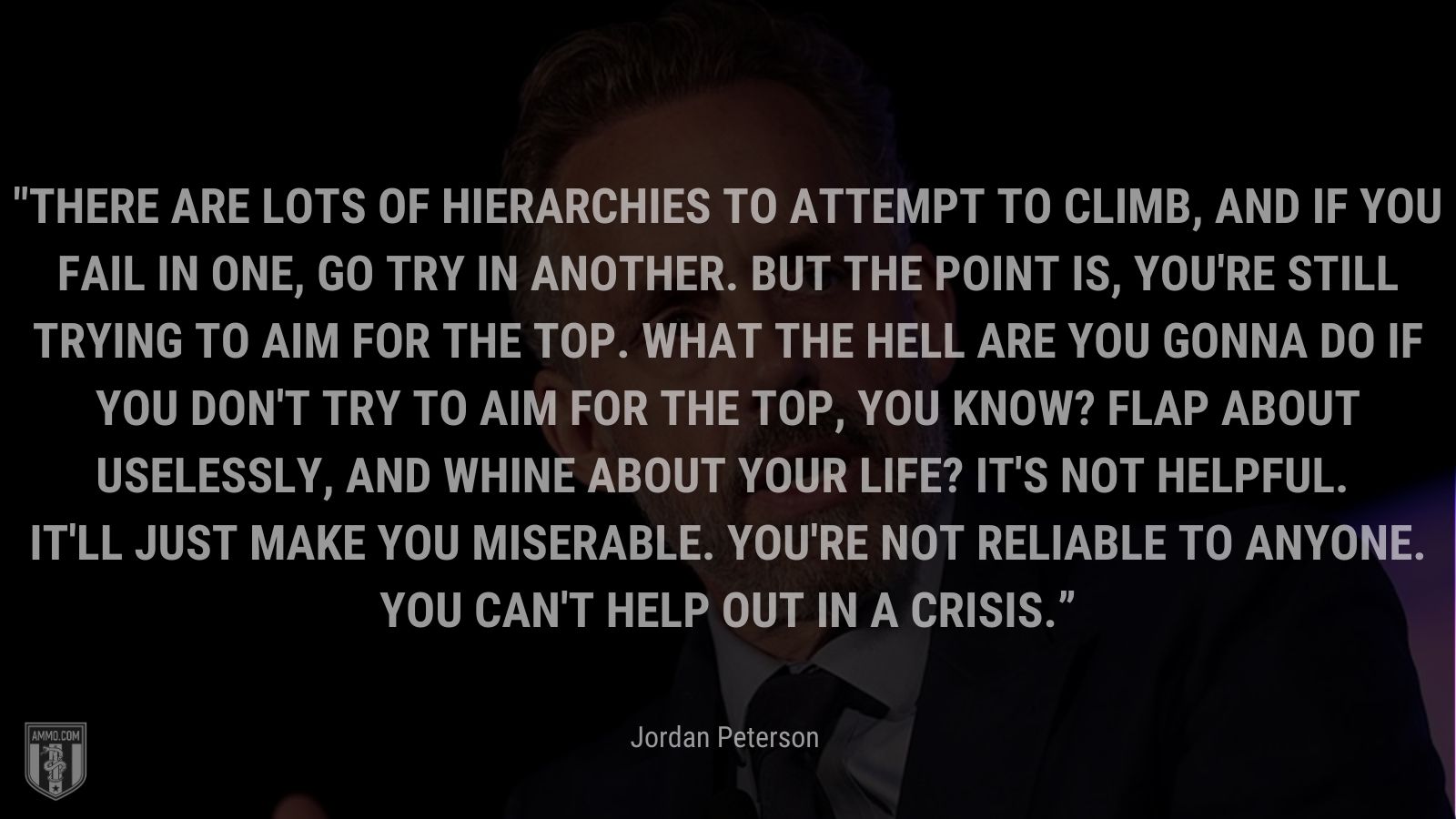 “There are lots of hierarchies to attempt to climb, and if you fail in one, go try in another. But the point is, you're still trying to aim for the top. What the hell are you gonna do if you don't try to aim for the top, you know? Flap about uselessly, and whine about your life? It's not helpful. It'll just make you miserable. You're not reliable to anyone. You can't help out in a crisis. 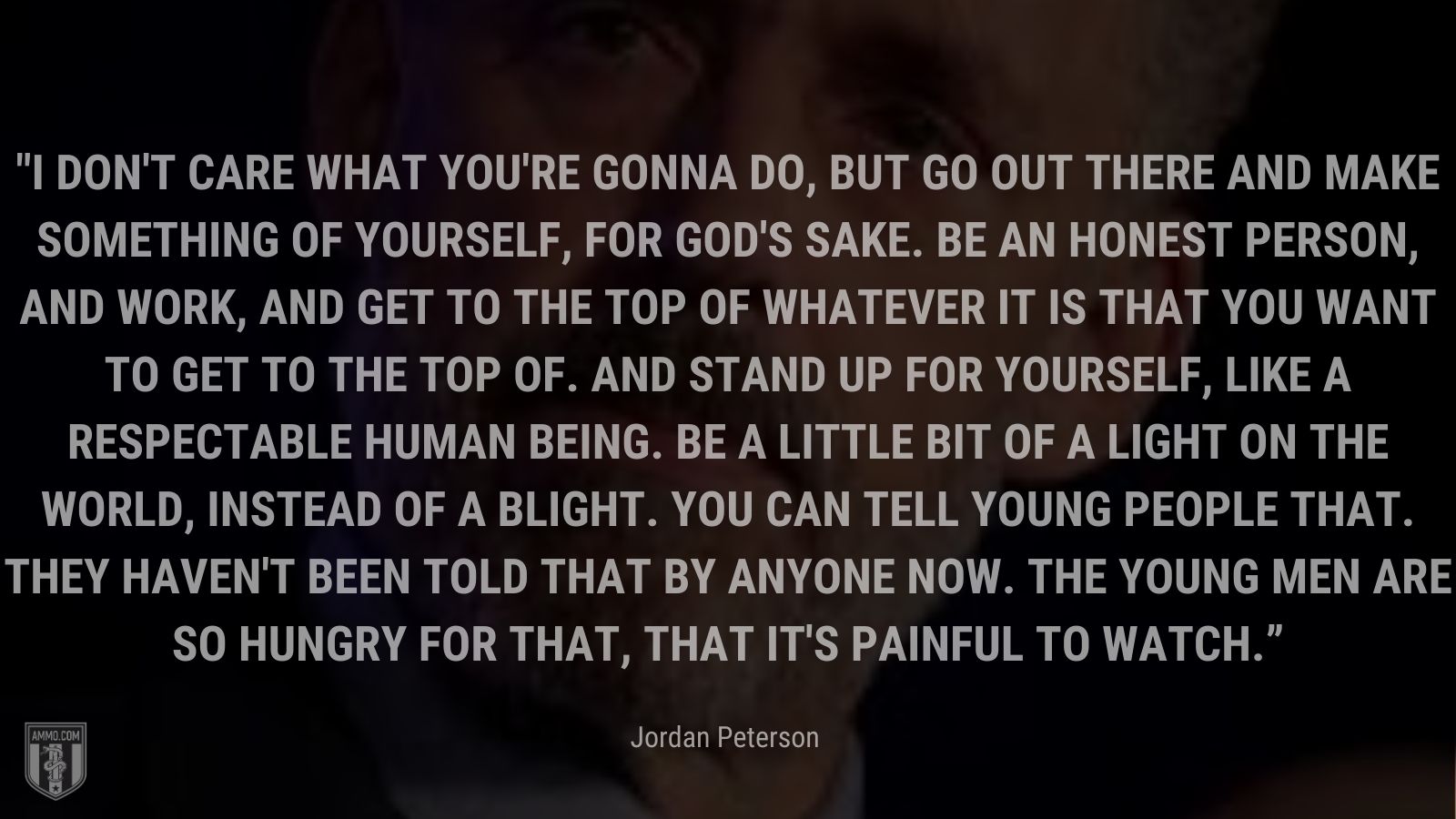 “I don't care what you're gonna do, but go out there and make something of yourself, for God's sake. Be an honest person, and work, and get to the top of whatever it is that you want to get to the top of. And stand up for yourself, like a respectable human being. Be a little bit of a light on the world, instead of a blight. You can tell young people that. They haven't been told that by anyone now. The young men are so hungry for that, that it's painful to watch. 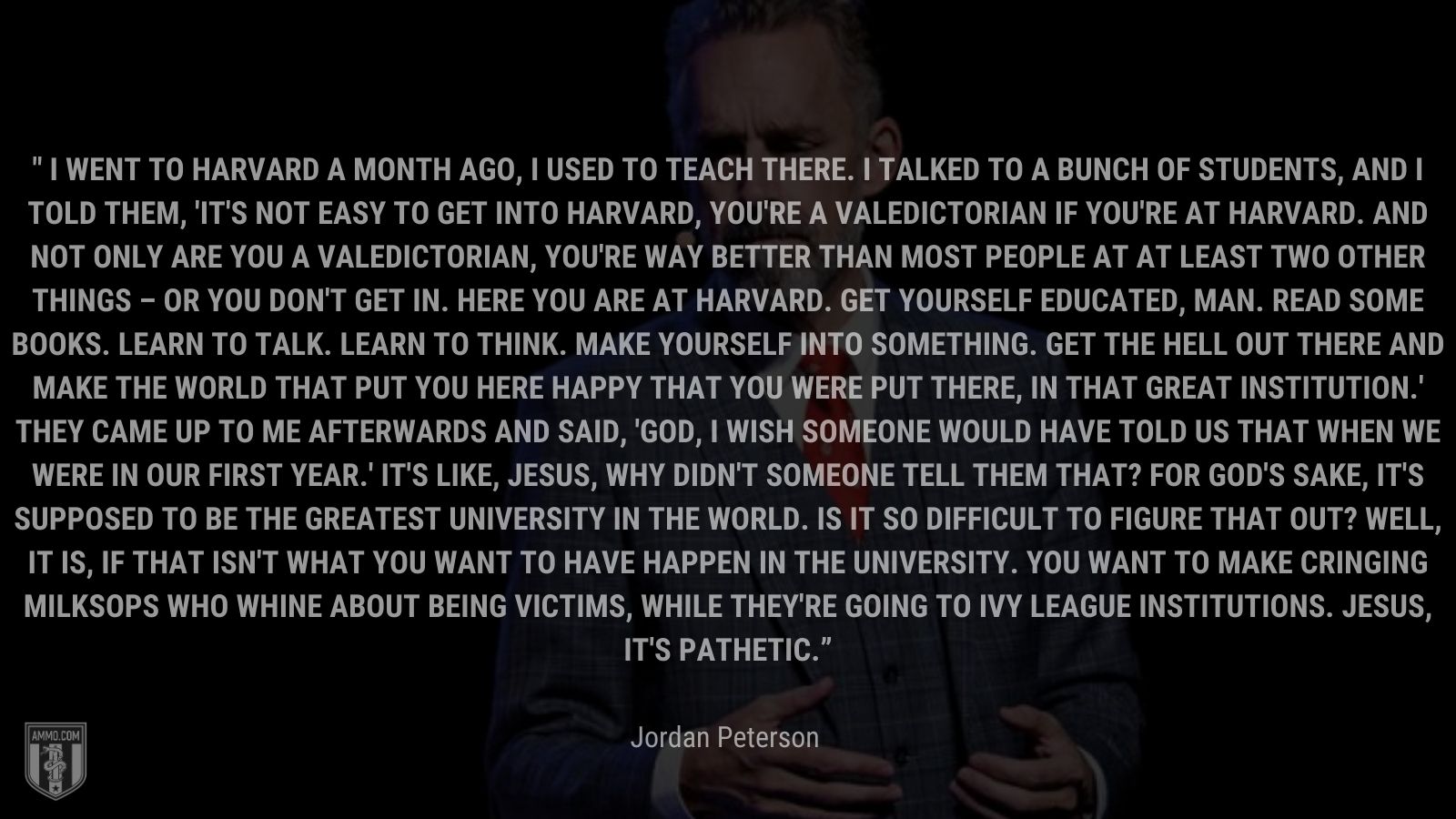 “I went to Harvard a month ago, I used to teach there. I talked to a bunch of students, and I told them, 'It's not easy to get into Harvard, you're a valedictorian if you're at Harvard. And not only are you a valedictorian, you're way better than most people at at least two other things – or you don't get in. Here you are at Harvard. Get yourself educated, man. Read some books. Learn to talk. Learn to think. Make yourself into something. Get the hell out there and make the world that put you here happy that you were put there, in that great institution.' They came up to me afterwards and said, 'God, I wish someone would have told us that when we were in our first year.' It's like, Jesus, why didn't someone tell them that? For God's sake, it's supposed to be the greatest university in the world. Is it so difficult to figure that out? Well, it is, if that isn't what you want to have happen in the university. You want to make cringing milksops who whine about being victims, while they're going to Ivy League institutions. Jesus, it's pathetic.” 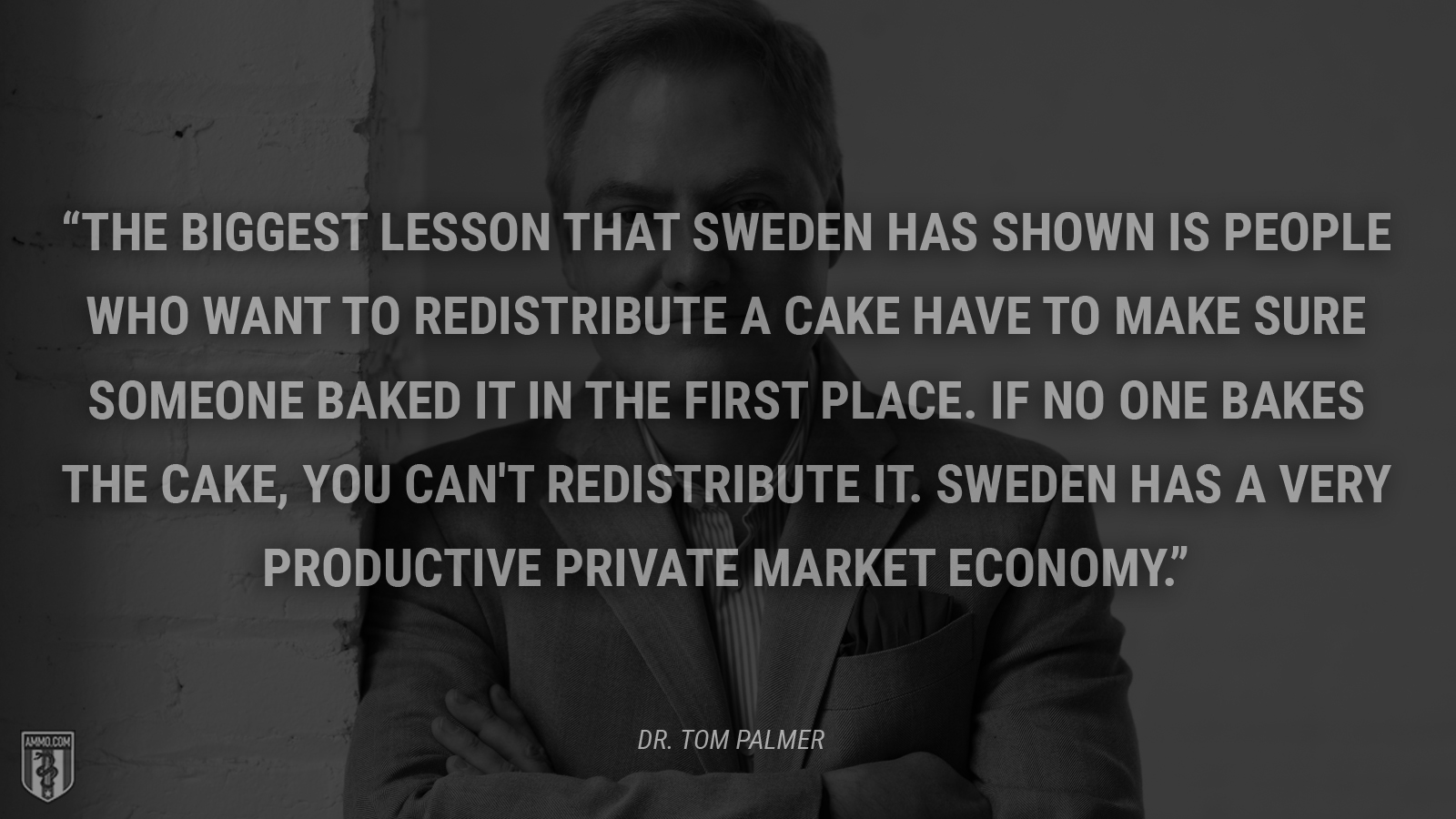 “The biggest lesson that Sweden has shown is people who want to redistribute a cake have to make sure someone baked it in the first place. If no one bakes the cake, you can't redistribute it. Sweden has a very productive private market economy.” 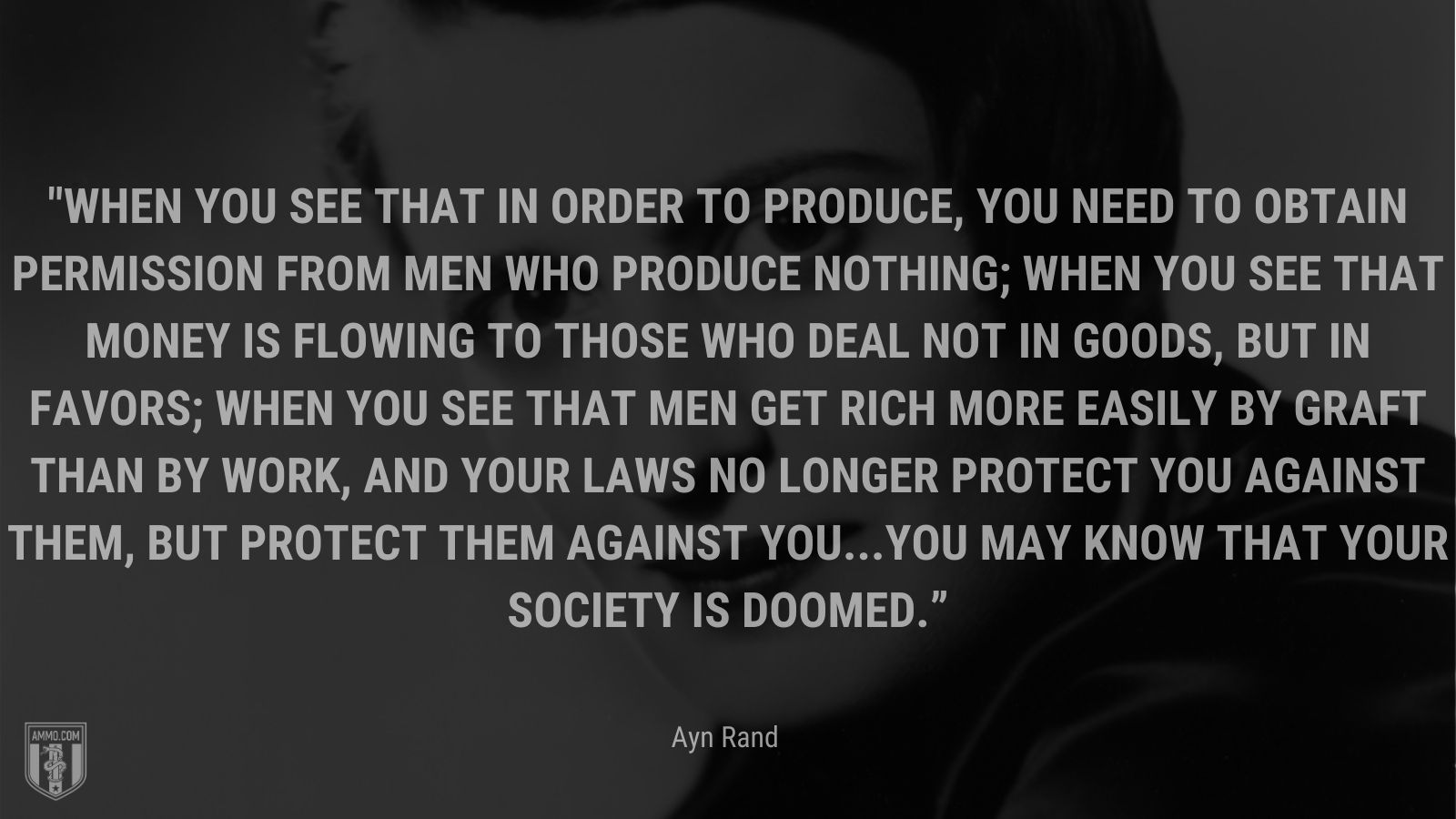 “When you see that in order to produce, you need to obtain permission from men who produce nothing; when you see that money is flowing to those who deal not in goods, but in favors; when you see that men get rich more easily by graft than by work, and your laws no longer protect you against them, but protect them against you...you may know that your society is doomed.” 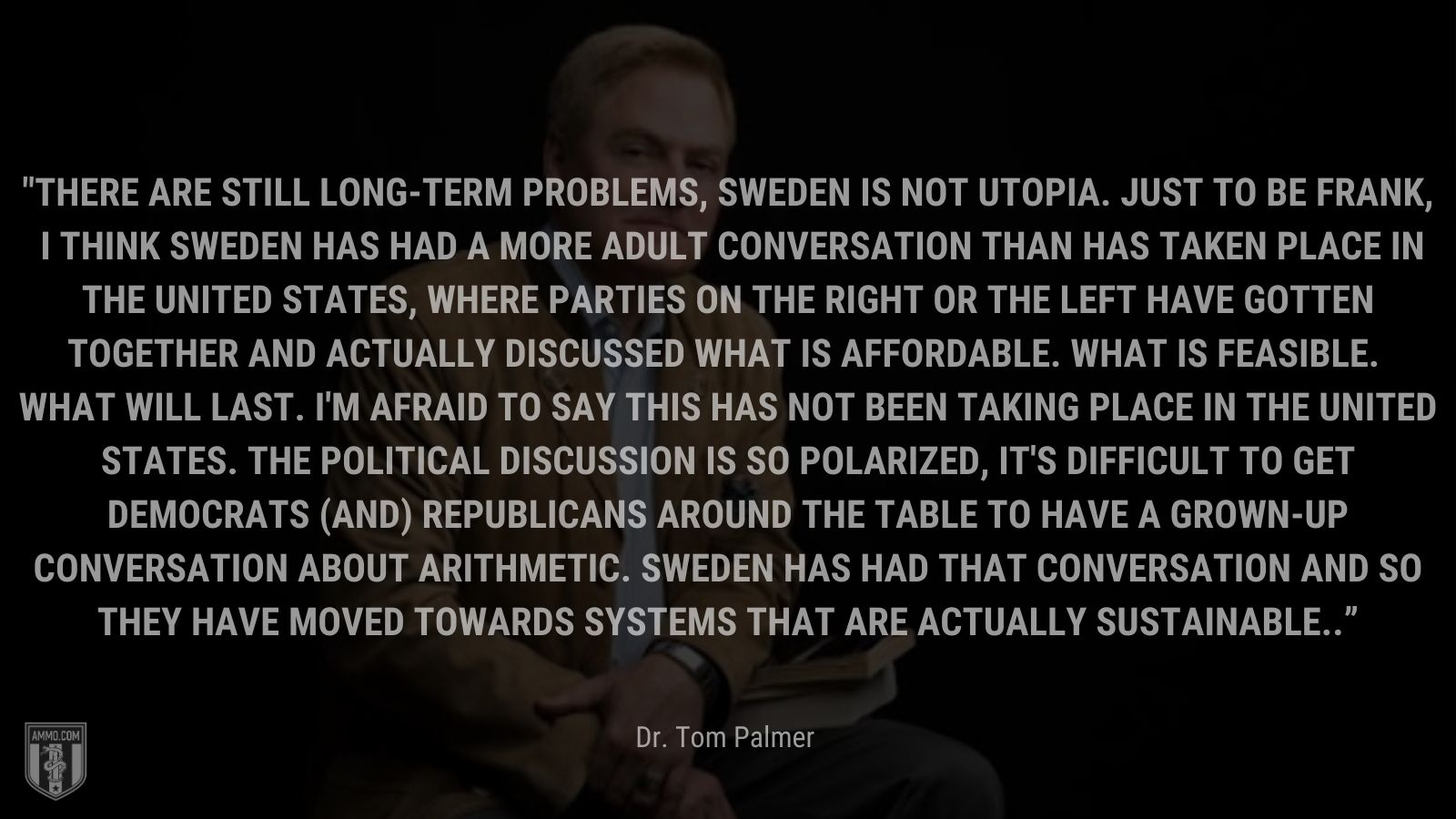 “There are still long-term problems, Sweden is not Utopia. Just to be frank, I think Sweden has had a more adult conversation than has taken place in the United States, where parties on the right or the left have gotten together and actually discussed what is affordable. What is feasible. What will last. I'm afraid to say this has not been taking place in the United States. The political discussion is so polarized, it's difficult to get Democrats (and) Republicans around the table to have a grown-up conversation about arithmetic. Sweden has had that conversation and so they have moved towards systems that are actually sustainable.”