Eugene Stoner: The Forgotten History of the Man Who Created "America's Rifle" – the AR-15 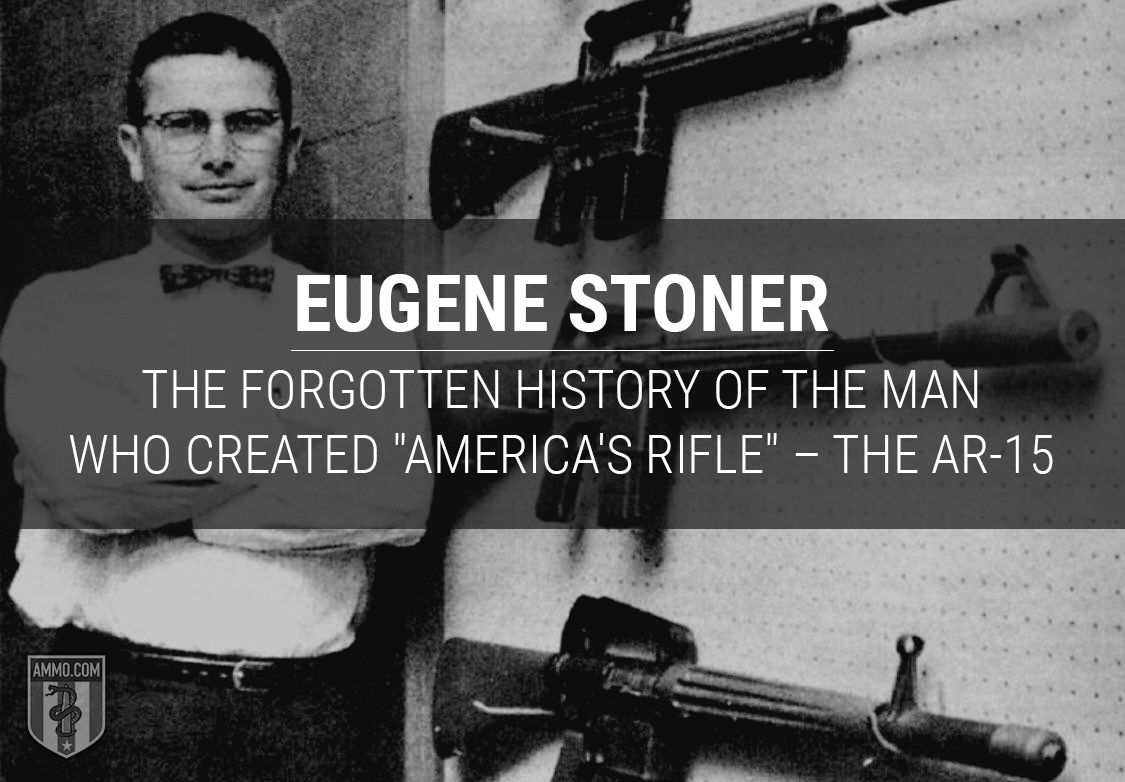 Eugene Morrison Stoner, the father of the AR-15 and the M16, is a titan in the world of both military- and civilian-use firearms. If he had done nothing but design the AR-15, his name would go down in history. But, of course, he did so much more than that. In addition to changing the landscape of American firearms, as well as the world stage, Stoner was also the archetypal “self-made American man,” working his way up from nothing on a high school education to forever change the world as we know it.

Born in Gosport, IN, in 1922, Stoner attended high school in Long Beach, CA, before working at the Vega Aircraft Company installing armament. Once World War II started, he enrolled in the United States Marine Corps, specializing in Aviation Ordnance. He served in Northern China and the South Pacific.

In 1945, at the war’s end, Stoner went to work in a machine shop owned by Whitaker, eventually working his way up to design engineer. In 1954, he went to work as the chief engineer for ArmaLite, then a division of Fairchild Engine and Airplane Corporation. His first projects were forerunners of the AR-15, with creative names like AR-3, AR-9, AR-11 and AR-12. These were all prototype small arms that never saw production. He did, however, see success with the AR-5, which was used as a survival rifle by the United States Air Force.

In 1955, Stoner completed the initial run of design on the ArmaLite AR-10. This was a revolution in the world of small arms – a weapon that boasted a compact size, was easy to fire and didn’t weigh too much. The AR-10 was chambered for the 7.62x51mm NATO, and was first tested at the U.S. Army's Aberdeen Proving Ground in 1956. It beat the competition largely due to its comparatively compact size. Still, the weapon was originally rejected in favor of the T44, which became the M14, mostly because of its late arrival in the testing cycle. Dutch company Artillerie Inrichtingen manufactured the AR-10 under lease until 1960. But this didn’t mean the AR-10 was anywhere near done.

America's Rifle: The Creation of the AR-15

The Army soon charged Stoner with modifying the AR-10 into the AR-15. This would use the smaller .223 Remington cartridge, though it was somewhat enlarged for Army SPCS. In addition to becoming “America’s rifle,” the AR-15 eventually became the M16, which became the standard-issue service rifle for the United States Army in 1969.

The AR-15 was developed because of the changing needs of the U.S. Continental Army Command (CONARC). New parameter challenges were set out for firearm companies in the beginning of 1957. Some months later, Stoner gave a live fire demonstration of what was still known as a modified AR-10, but would soon rocket to fame as the AR-15.

The new rifle fired at supersonic speeds at 500 yards and had both semi-automatic and fully automatic settings. Thanks to the modified cartridge developed by Stoner, based on the .223 Remington, it was capable of penetrating steel plates at 500 yards. Stoner demonstrated the AR-15’s superiority in live testing in front of Commanding Army General Willard G. Wyman and Air Force General Curtis Le May (who later ran for Vice President underneath George Wallace). The impressive power, accuracy, and low rate of failure won them over and the Air Force ordered 80,000 AR-15s chambered in .223 to replace the M-14 (which was lacking). The next year, the United States military adopted the ArmaLite AR-15 as its official rifle with some modifications as the M16.

ArmaLite later sold the rights to the AR-15 to Colt. Stoner then began work on the AR-16, which was similar to the AR-15. It was only produced in prototype form, but soon became modified into the AR-18, which sold modestly well in addition to being frequently imitated by other manufacturers.

In 1961, Stoner left ArmaLite to go work for Colt before moving to Cadillac Gage, where he developed and designed the Stoner 63 Weapons System. This was one of the first modular weapon systems reconfigurable as a standard automatic rifle, a light machine gun, a medium machine gun, or a solenoid-fired fixed machine gun, which was a massive innovation at the time.

In 1972, Stoner co-founded ARES Incorporated of Ohio, where he designed an evolved version of the Stoner 63, the ARES light machine gun. He left the company he founded in 1989, joining Knight’s Armament Company (KAC) in 1990. Here he developed the Stoner Rifle-25 (SR-25), the current sniper rifle of the U.S. Navy. He also designed another version of the Stoner Weapon System, the Stoner 65. The SR-15 and the Colt 2000 are among the final weapons designs of his career.

In May of 1990, Eugene Stoner and Mikhail Kalashnikov (creator of the equally noteworthy AK-47) met for the first time in Washington, D.C. The two pioneers in firearm innovations bonded over their similar passions by visiting the NRA’s National Firearms Museum, shooting at a local gun range, and having the opportunity to witness new weapon testing at the Marine Corps base in Quantico, Virginia. They did not require an interpreter to exchange ideas.

On April 24, 1997, Eugene Stoner passed away at the age of 74 due to cancer. He was interred in Quantico National Cemetery in Quantico, Virginia.