Butch O'Hare: The History of the WWII War Hero and First Naval Recipient of the Medal of Honor 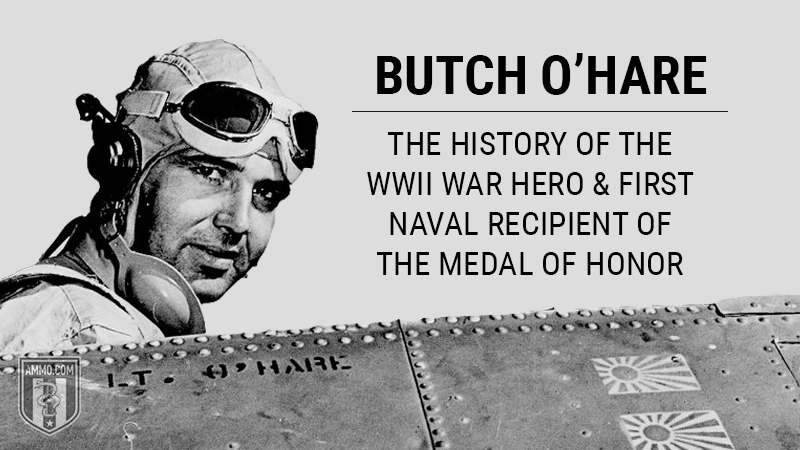 Edward “Butch” O’Hare was the Navy’s first flying ace, a World War II hero whose name would have been commonly known at the time, but has sadly faded out of view for most Americans. With severely limited ammunition supplies, he was able to shoot down five Japanese bombers, which is how he became the first Naval recipient of the Medal of Honor during the Second World War.

But this was not his only brush with world history: His father, known around Chicago as “Easy Eddie,” was Al Capone’s high-powered attorney. Easy Eddie was so prized by Capone that he wasn’t just paid a handsome salary – he was also kept in the lap of luxury in a house the size of an entire Chicago city block filled with servants.

Easy Eddie lavished the young Butch with gifts. But he was also concerned with his education and moral upbringing – the latter of which changed Easy Eddie’s entire life, when he ultimately decided to testify against Capone in open court. Needless to say, this didn’t end well for Eddie Senior: His life ended in a hail of bullets on the streets of Chicago.

This was an important moment in the life of Butch. It was here that he learned the true meaning of courage from his father. And he would carry this with him into the air when he fought the Japanese during World War II.

He also picked up his love of aviation from his father. The elder O’Hare caught the bug toward the end of his career as Capone’s attorney. He once hitched a ride with Charles Lindbergh, and took the yoke on commercial flights whenever the opportunity presented itself. Sometimes he would let young Butch take the controls.

Unlike most of the people who served during the Second World War, Butch had been in the U.S. Navy for nearly 10 years before the attack on Pearl Harbor. Graduating from the Western Military Academy in 1932, he went on to attend the United States Naval Academy. He graduated in 1937, receiving the rank of Ensign, serving two years on the USS New Mexico. His flight training began in 1939, and was finished the next year. He made his first official flight on the morning of July 21, 1941.

Butch’s father was murdered on the day of Ensign O’Hare’s first training flight. Upon landing at sunset, he learned of his father’s murder.

Soon after, he went to visit a friend in the hospital. This is where he met his wife who was working as a nurse. Butch certainly knew what he wanted out of life – he proposed to Rita Wooster the first time they met. He converted to Catholicism for the purpose of marrying her, which he did six weeks after their first meeting. They set sail on separate ships headed toward Hawaii for their honeymoon. Soon after, Butch was called into active duty following the attack on Pearl Harbor.

Earning the Medal of Honor

The flight that earned O’Hare the Medal of Honor is one of the most storied in the history of naval aviation. On February 20, 1942, then Lieutenant O’Hare and his wingman were the only pilots available in the region when Japanese bombers began attacking their aircraft carrier, the Lexington.

The Lexington was charged with penetrating into Japanese-occupied waters around New Ireland, an island that is today part of Papua New Guinea. They were 450 miles from harbor when radar picked up enemy aircraft a mere 35 miles away. Six combat planes were launched, but only two were sent to investigate the enemy aircraft -- Butch and his wingman, Marion William Dufilho, whose weapons jammed early into the mission, leaving Butch as the lone line of defense against the oncoming Japanese onslaught.

O’Hare’s craft was armed with four 50-caliber guns. Each of these had 450 rounds. That might sound like a lot, but it’s actually only enough ammunition for firing for about 34 seconds. O’Hare didn’t have a lot of time, and the time that he had he needed to make count for as much as he could.

On his first firing pass, he took out two of the crafts temporarily, but they quickly extinguished the fires his guns lit. However, on his second firing pass, he was able to incapacitate one of the planes, while sinking another into the sea. It was on his third pass where he did the most damage. He took out the squadron’s second-in-command, leaving the squadron leader completely exposed. He then blew a massive hole in the wing of the squadron’s commanding officer. The leader’s craft plummeted into the sea. His final firing pass attempted to take one of the planes from the first pass out of commission for good, but by this time he was out of ammunition.

When the dust settled, there was some disagreement about what he hit and how badly he damaged it, but in the final analysis, it was determined that O’Hare hit six – three of which crashed and three of which were badly damaged. On descent, he was fired upon by his own gunner, which prompted him to say upon landing, "Son, if you don't stop shooting at me when I've got my wheels down, I'm going to have to report you to the gunnery officer."

The math works out to about 60 rounds of ammunition for each bomber he destroyed, which is a highly impressive rate of marksmanship by any definition. He was credited with saving the Lexington from serious damage or even being completely destroyed.

On March 26, the vessel arrived in Pearl Harbor and the press was eagerly awaiting their turn to talk to Butch. He used one radio interview to tell his wife, "Here's a great big radio hug, the best I can do under the circumstances.” Of course he said “hi” to his mother while he was at it. The Grumman Aircraft Corporation plant at Bethpage, where his F4F Wildcat was made, presented him with the gift of 1,150 cartons of Lucky Strike cigarettes, a whopping 230,000 cigarettes. The workers at the factory passed the hat to pay for Butch’s smokes out of their own pockets. Butch was a loyal Camel man, but smoked them anyway.

He was presented with the Presidential Medal of Honor by his wife and received a promotion to Lieutenant Commander. He also received a parade in St. Louis, where he sat sandwiched between his wife and mother in front of 60,000. The mayor presented him with a gold navigator's four-dial watch, engraved with “To Lt. Commander Edward H. O'Hare, USN, from a proud and grateful City of St. Louis, April 25, 1942." As the American war effort badly needed a living hero, Butch made the rounds on non-combat duty helping to sell war bonds.

After all the partying was done, he returned to duty, this time training pilots. It was U.S. Navy policy that the top fighting aces were to be used training the next crop of pilots, in contrast to Imperial Japan’s policy of sending all their best pilots out to fight.

He returned to combat duty on August 22, 1943, on the light carrier USS Independence. He continued to instruct pilots under his command in life-saving flight techniques.

On November 26, 1943, O’Hare went missing on what would be his last mission. There was some controversy as to whether or not he was felled by a Japanese Betty or by friendly fire from his fellow troops. Indeed, for 57 years there was no definitive answer about this either way. But in 1997, Fateful Rendezvous: The Life of Butch O'Hare by Steve Ewing and John B. Lundstrom, conclusively demonstrated that his plane was shot down by a lucky Japanese shot.

On December 9, Butch was officially declared missing in action. A year later, on November 26, 1944, he was declared officially dead. His wife received his posthumous decorations, the Navy Cross and a Purple Heart.

On January 27, 1945, a Gearing-class destroyer, the USS O'Hare, was named  in his honor. On September 19, 1949, Orchard Depot Airport was renamed O’Hare International Airport – ironic considering that Butch never actually lived in Chicago. O’Hare was both born and raised in St. Louis, MO.

Butch O’Hare was a giant war hero during and immediately after the Second World War, and for good reason. Even as a commanding officer he wasn’t afraid to fly toward the danger. That’s some serious grit that he no doubt learned from watching his father stand up to organized crime. There’s a lesson there for anyone.