Davy Crockett: The Forgotten History of the King of the Wild Frontier & the Battle of the Alamo 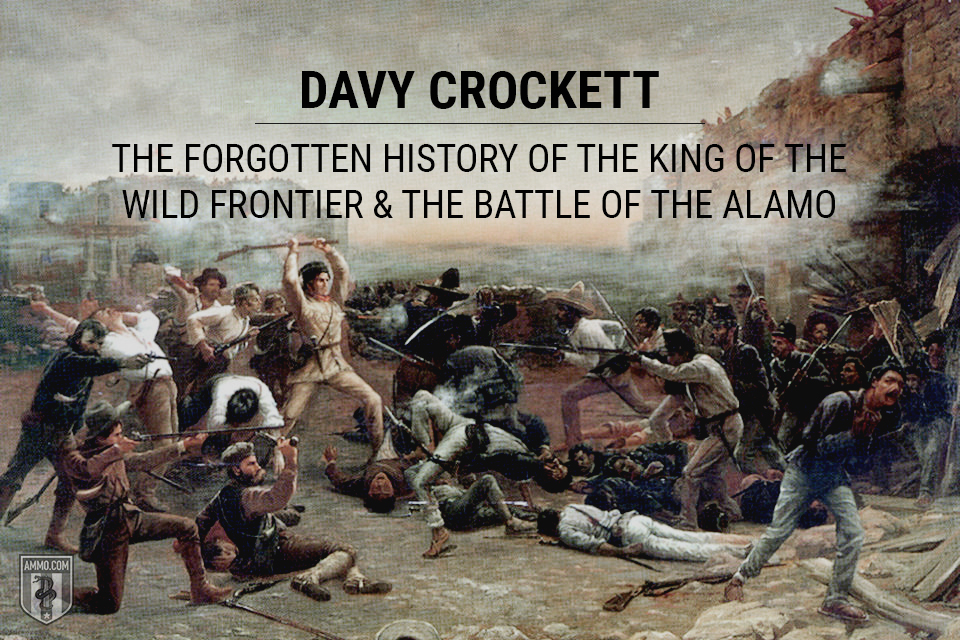 “I bark at no man’s bid. I will never come and go, and fetch and carry, at the whistle of the great man in the White House no matter who he is.”

David Hawkins Stern Crockett, fondly remembered as Davy Crockett, was born in eastern Tennessee to pioneer parents on August 17, 1786. Like many settlers of the time, the Crockett family continually pushed West, blazing into new territory (a trend Davy would continue to do with his own family) and by the time Davy was 12, the family had moved three times and was living in western Tennessee.

Known as an honest and hardworking boy with a good sense of humor, Davy learned to shoot with his father around age eight and enjoyed joining his older brother on hunting trips.

The boy who would become known as “King of the Wild Frontier” ran away from home at the age of 13, after getting in a fight at school almost immediately after he was enrolled. Not wanting to face the wrath of his father, or retaliation from the class bully he fought, Davy went on his own, taking up odd jobs including working as a farmer, cattle-driver, and hatter.

At 15, Davy returned home and indentured himself, more than once, to pay off his father’s debts. Unbeknownst to the country boy, young Davy’s humble beginnings were leading him down roads that would twist through politics, battlefields, and America’s heart – turning him into a folk hero of mythical proportions.

Davy Crockett: An American Icon in the Making

On August 16, 1806, one day before his 20th birthday, Davy Crockett showed up on the front porch of 18-year-old Polly Finley, insistent they marry, even if her parents refused to accept it. Her father, afraid that he’d miss his daughter’s wedding, gave the union his approval and the two were wed.

She bore their first son, John, in 1807, and a second son in 1809, William. In 1811, Davy moved the family further West, settling on Beans Creek in Franklin County, Tennessee. The mountains, which were Crockett’s favorite hunting grounds, were within view. Their daughter Margaret was born the following year.

In 1813, Davy enlisted and fought beside militias during the War of 1812. His reputation grew as both a scout and hunter during the Creek War, and while helping defeat the American Indians, he provided food for his whole regiment with nothing more than a rifle.

At home, life on the frontier was not easy and it took its toll on Polly. In the spring of 1815, shortly after Davy returned from his second enlistment, she died at the age of 27. Crockett, in his autobiography written years later, would fondly remember Polly, saying, “She looked sweeter than sugar.”

A soldier with three young children, Davy soon married a widow who lived nearby, Elizabeth Patton, who bore him three more children: Rebecca, Matilda, and Robert.

Always known as a good public speaker and a teller of tall tales, Davy had a way with people and was soon elected to local government, where he served as a Justice of the Peace and County Commissioner. By 1821, Crockett was elected to Tennessee’s State Legislature and in 1827, he was elected to the United States House of Representatives.

Crockett used his frontiersman history to his advantage, demonstrating backwoods charm and homespun metaphors. His image as a rough country legislator worked for him, and with his coonskin cap and stories of hunting bear, he soon became a folk hero.

Davy ran for his first term as a Democrat and supporter of President Andrew Jackson, who he served under during the Creek War. Once he arrived in Washington, Crockett worked as a spokesperson for the frontiersmen who elected him, trying to reduce taxes, settle land claims, and protect their economic interests.

During his three terms, Crockett proposed multiple legislations, none of which went far, including legislation to abolish the U.S. Military Academy at West Point, New York, which he felt was using public money to benefit the children of wealthy men.

Crockett moved away from Jackson’s policies, eventually running as a Whig. He was the only member of the Tennessee delegation to vote against the Indian Removal Act, which was the first formal move away from respectful legislative treatment of the Native Americans. The Indian Removal Act, which became law in 1830, authorized the president to “negotiate” with tribes to remove them from their ancestral lands to federal territory west of the Mississippi River.

Although the Act was passed into law, Crockett received a letter of thanks from the Cherokee Chief, John Ross, acknowledging Davy’s support.

In 1934, after a close race, Crockett lost to Adam Huntsman, who had gained the president’s favor. Disgruntled about the loss and frustrated with the way of government, he wrote in his autobiography, which was published the same year, “I told people of my district that I would serve them as faithfully as I had done, but if not, you can all go to Hell, I’m going to Texas.”

Tired of Jacksonian politics, Davy, along with a group of 30 men, made their way to Texas, leaving their home in Tennessee on November 1, 1835. Years later, in reflection on the last day she saw her father, Davy’s daughter Matilda said, “He was dressed in his hunting suit, wearing a coonskin cap and carried a fine rifle presented to him by friends in Philadelphia.”

Throughout their nearly three-month trip to Texas, Crockett and his company of volunteers drew a crowd. Everywhere they went, people would come to see the charismatic storyteller, who was already becoming famous for his grandiose personality, holding dinner in his honor while listening to him talk of independence for Texas and Washington politics. As he made his way across the South, Crockett realized the sympathy Americans had for Texas and worked to gain support for the cause.

On January 14, 1836, Davy signed an oath to the Provisional Government of Texas for six months, in return for a promise of a substantial piece of property. He continued west and arrived at the Alamo in San Antonio, Texas, on February 8th.

Davy Crockett and the Alamo

A small adobe structure measuring just 63 feet wide and 33 feet tall, the Alamo housed around 250 to 300 people, including both enlisted soldiers commanded by William Travis and volunteer fighters who followed the direction of Jim Bowie (who had actually been sent by Texas Army General, Sam Houston, to dismantle and destroy the Alamo, which he said was too dangerous to hold). By the time Crockett arrived to the Alamo, tensions were high between Travis and Bowie, both striving for control.

Always the politician, Crockett quickly defused the tensions between the two and lifted the morale of the men, who were excited to see the famous frontiersman and politician among their ranks. What’s more, the 30 or so pioneer volunteers Crockett brought with him were lethal with their rifles and a much needed support for the Alamo’s forces.

But the boost in spirit didn’t last long.

On February 23rd, the Mexican Commander Santa Anna arrived at the Alamo with his 6,000 troops and initiated a siege. Knowing they wouldn’t stand against such forces on their own, Travis sent word to James Fannin, a commander located about 90 miles away. Although he never sent word back, Fannin had no plans on assisting. Claiming “logistical obstacles,” Fannin refused to send his troops into what he saw as a hopeless situation. Even so, 50 men left his service and headed toward the Alamo, trying to help their fellow Texans.

On the night of March 5th, it’s said that Travis stood amongst the men, both soldiers and volunteers, and taking his sword, he drew a line in the sand. He asked everyone who was willing to stay and fight to cross the line. All but one man stood and crossed the line, even though they knew they were outnumbered and even though they knew the end was near.

Shortly before dawn on March 6, 1836, Santa Anna’s forces attacked the Alamo. And within 90 minutes, the fight was over. The Mexican forces destroyed the Texans, along with Davy Crockett. The last standing, seven men, were taken prisoner and eventually executed.

Where Davy died during the Battle of the Alamo is unknown. Some say he died around the barracks. The Mexican army released the women, children, and slaves at the Alamo, and one slave reported that Crockett’s body was found surrounded by no less than 16 mexican corpses, one with Crockett’s knife buried in his body. The Mayor of San Antonio, who witnessed the horrific scene after the battle, supports this story, saying that Crockett’s remains were found near the fort.

Others claim that Crockett was among the seven captured and executed men. Jose Enrique de la Peña, a mid-level officer in Santa Anna’s army, wrote a diary that was found and translated in 1955. In it, he claims that Crockett surrendered and was then executed. Another man, a slave of one of the Mexican officers, later told an American doctor that a “red-faced man” who others called “Coket” was among the executed. Yet Santa Anna never laid claim to executing America’s hero, something historians believe he would have used to his advantage.

Instead, Crockett was viewed as a martyr and his death helped gain momentum for the cause of Texas independence. On April 21, 1836, Sam Houson and his forces, who were outnumbered and in the process of retreating toward the U.S. border, came across Santa Anna and 1,400 of his men at San Jacinto. Houston decided to attack and as his men ran toward the Mexican camp, they yelled, “Remember the Alamo.” The Texans won the battle and the next day, captured Santa Anna, ensuring Texas’ independence as a sovereign republic.

At San Fernando Cathedral in San Antonio, Texas, visitors can pay respects at a memorial that reads:

"Here Lies the Remains of Travis, Crockett, Bowie and Other Alamo Heroes Formerly buried in the sanctuary of the Old San Fernando Church. Exhumed July 28, 1936. Exposed to the public view for a year. Entombed May 11, 1938. The Archdiocese of San Antonio erected this memorial May 11 A.D. 1938. R.I.P."

Davy Crockett, the larger-than-life frontiersman, the bear-hunting pioneer, the Tennessee Representative, and the man with less than 100 days of education, but a razor-sharp wit and a homespun murmur, won the hearts of Americans with his folk-legend status, both during his time, and beyond. Today, he’s been memorialized in television shows, movies, and books. Towns, counties, schools, and more memorialize him with their names.