Georg Luger: The Forgotten History of the Man Who Designed the Luger Pistol and 9mm Ammo 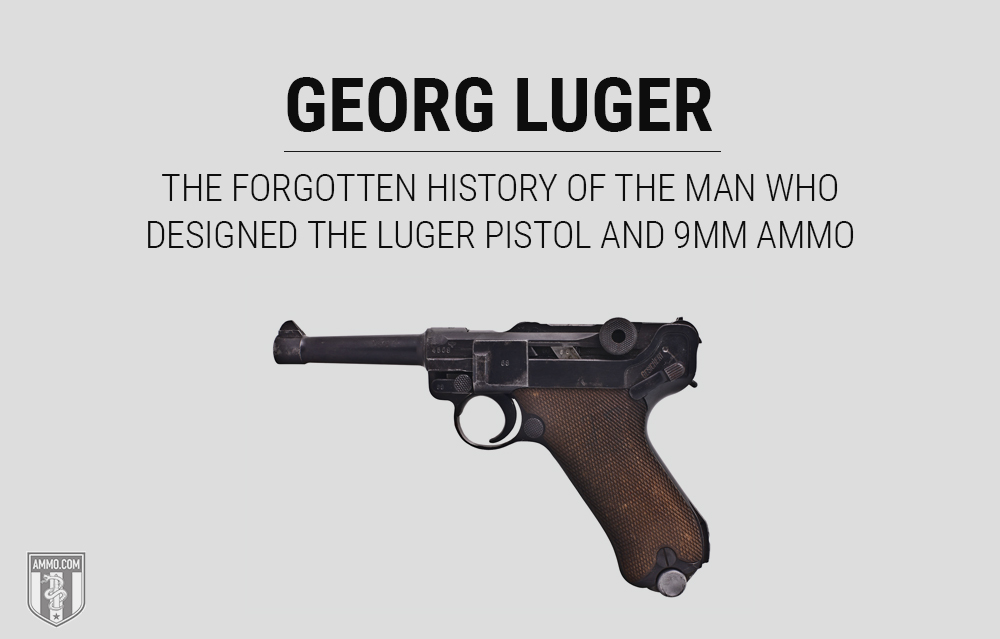 After the American revolver, there is simply no other handgun in the world that is as easily recognizable as the Luger pistol. The Pistole Parabellum is it’s official name, but to virtually anyone, the weapon is simply the “Luger.” Georg Luger designed this iconic weapon, as well as the ammunition with which the Luger is loaded – the 9x19mm Parabellum cartridge.

While the weapon is largely associated with Germany, Luger was, in fact, born in the Austrian Empire in 1849, in a city just over the border from modern-day Italy. His father, a surgeon, moved the family to Italy not long after Luger’s birth where the elder Luger taught at the local university. Luger, however, completed his education in Austria, and then went onto Vienna, where he studied at what is today the prestigious Vienna Business School.

In October 1867, he volunteered for military service as a reserve cadet. His superior officers immediately noticed his excellent marksmanship. They sent him to the Austro-Hungarian Military Firearms School at Camp Bruckneudorf, where he was quickly charged with training marksmanship to other cadets. It was here that he first became interested in automatic loading systems.

Still, the interest went nowhere. Georg left the academy and became an accountant. Indeed, his story might have ended here without anything further if not for a chance encounter many years later. In 1875, Luger met Ferdinand Ritter von Mannlicher and began collaborating with him on rifle magazine designs, which reignited his previous interest in armament. By the beginning of the 1890s, he was working in armament development.

While primarily known for the weapon that bears his name, he also worked on the C/93 semi-automatic pistol designed by Hugo Borchardt. He kept most of what made the C/93 work, but moved the action to the rear of the grip and angled the weapon, both of which made it a more balanced piece. He also shortened the ammunition in the weapon, which made the grip narrower. This was a new cartridge altogether, known as the 7.65x21mm in Europe and the .30 Luger in the United States.

The Rapid Rise of the Luger Pistol

This new pistol caught on rather quickly. Switzerland was the first to pick up the gun in 1900. The United States took a look at it during the same trials that produced the Browning M1911. Georg even visited the famed Springfield Armory on May 21, 1903, and brought a prototype of the Model 1902 with his own cartridge design, the 9x19mm.

The Model 1904 was eventually adopted by the Imperial German Navy and later the Germany Army. In fact, this weapon still enjoys the P08 designation to this day. The weapon was used extensively during the Second World War, however, production sharply declined after the end of each of the world wars – owing first to the Treaty of Versailles and second to the dramatic reduction in the German military after the end of the Second World War.

Today the weapon that bears Georg’s name is no longer used in any large scale official capacity, but it remains popular nonetheless. However, it’s his ammo that endures. The Beretta 92 and the Glock 17/19 are in widespread military and police use in the United States. It has been dubbed the most widely used military cartridge by the authoritative Cartridges of the World. And it’s used by 60 percent of the police in the United States. Newsweek has cited the weapon as the one that made people more interested in semi-automatics than revolvers.

Cops and Robbers Adopt the “Nine”

Law enforcement began adopting the weapon shortly after the Second World War because of the semi-automatic feature, but also because it was a compact pistol offering the promise of a large capacity magazine. Before this, the preferred weapon of the American police department was the .38 Special, which had low recoil and was comparatively inexpensive. By the 1980s, the 9mm cartridge was a cultural icon, name checked in gangster rap and featured in films like New Jack City and Boyz in the Hood.

What’s more, collectors love the weapon because it is one of the most iconic pieces of military design in history, comparable to the Colt 1911 in terms of its iconic status. It is closely associated with the German military and its image from the Imperial period all the way through to the end of the Third Reich. Indeed, a Luger pistol was one of the most prized war trophies that American GIs brought home with them from the European theater. The weapon continued to be used by Stasi agents and the Volkspolizei in the German Democratic Republic (East Germany).

The weapon is not without its flaws, primarily because it is one of the more primitive semi-automatic weapons. Indeed, it is highly sensitive to pressure and requires higher-pressure cartridges to fire properly. It was designed to work with a specific type of cartridge, and using it with another type of cartridge can cause the weapon to jam. Tested for automatic fire during trench warfare during the First World War, it was found that the weapon had too fast a rate of fire at the automatic setting to be effective.

In addition to setting the standard for German weapons design, it also inspired other models. The barrel in particular was groundbreaking because of the excellent accuracy it provided. This is perhaps how the 9mm became such a versatile round – the widespread use of the Luger weapon. This humble round now has more variants than one can reasonably keep track of, making it perhaps the most popular caliber in the world today.

It all started with a humble weapons maker in the Austrian Empire, who was simply good at shooting and liked the process of weapons design. Georg Luger, whose last name is widely known around the world and outside of the firearms community, is a testament to how a small invention can leave a very, very big footprint. Think of him the next time you pick up a case of 9mms.