Charles Newton: The Forgotten History of the Wildcatter Who Created the .22 and .250 Savage 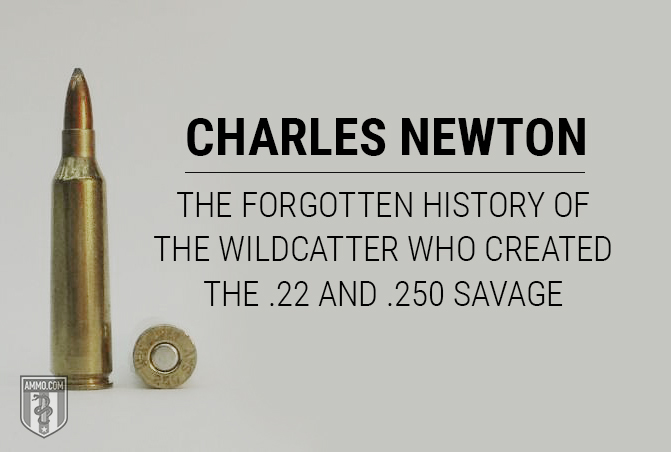 Wildcatters are a specific subset of firearms enthusiasts – nerds among nerds, if you will. And their king is Charles Newton.

Newton was an attorney whose wildcatting was a hobby, not a career. However, his work in the world of wildcatting resulted in what is a sort of crowning achievement for a wildcatter: A company took up one of his creations, the .22 Savage Hi-Power, which Savage Arms began making officially in 1912. Soon after this, Savage began manufacturing the .250-3000 Savage (also known as the 250 Savage).

The 22 Savage boasted a high velocity for the time it was developed, which in turn led to a shocking display of power. Its killing power was seen as nothing short of miraculous for larger prey with relatively soft skin, such as tigers – this was the golden era of big-game hunting and the African safari. Reverend H. R. Caldwell brought notoriety to the round by using it to bag 400-pound tigers in China. This was exploited to great effect in the early advertising for the round.

Not Just For Tigers: It Drops Elephants, Too!

It wasn’t just for tigers, however. WDM Bell, a reporter on famous elephant hunters of the time (yes, the early 20th century had “famous elephant hunters”), used the round to drop West African cape buffalo. He also wrote in various magazine articles of the time that the round was both useful and popular for hunting red deer in Scotland. The round eventually fell out of favor with the rise of .22 centerfire cartridges, especially the 222 Rem., 222 Rem. Mag., and the 220 Swift. Other factors include its use of .228" bullets rather than the .224" used in other 22 centerfires. A rimmed case and specialized chambering didn't help. It still enjoys some popularity in Europe, where it is known as the 5.6x52mmR, for deer hunting. No American manufacturers currently make the .22 Savage.

The 250-3000 Savage was made by Newton for the purpose of fitting the Savage Model 99, a popular lever-action rifle of the time. This is an area where the company perhaps improved upon Newton’s work. He recommended 100-grain bullets, but Savage ended up manufacturing the cartridge with 87-grain bullets, resulting in speeds of 3,000 feet per second. Newton argued – publicly – that this was primarily for publicity purposes and believed that his original version was better. It is somewhat similar to the .25-06 Remington, but with less power and recoil, and even more similar to the .257 Roberts, the .30-30 and the .243 Winchester. This round also formed the basis of the improved and wildcatted .250 Ackley (also known as the .250 Improved or the 250 Ackley Improved).

The .25-06 Remington is another cartridge that began its life as a Newton wildcatted round: the .25 Newton Special, which was a necked down .30-06 Springfield round.

The Method to the Madness

There was a general method to the madness of Charles Newton: He liked using large cases for his cartridges, with an eye toward accommodating greater amounts of powder charge, which in turn led to greater velocity, resulting in highly effective terminal ballistics.

There are two other rounds of note in the world of Charles Newton. First, there is the .30 Newton, developed from the parent round 11.2x72 Schuler. The Newton version was originally known as the 30 Adolph Express after Fred Adolph, a renowned gunsmith from Germany. Adolph’s idea was to neck down rimless German cartridges for greater velocity, and the only option for a rimless American cartridge at the time was the .30-06. The round is now largely considered obsolete, but was popular before World War II. Newton was the only person to sell weapons chambered for the round.

The other primary round made by Charles Newton is the 35 Newton. This was another rimless centerfire cartridge that Newton introduced in 1915, which took the 30 Newton case and necked it up to a .358 caliber. Newton then loaded this with 250-grain hollow point bullets.

Of course, a cartridge is worth nothing without a weapon that fires it. Luckily, Newton was as well known for his firearms as he was for his cartridges. He incorporated his Newton Arms Co. in 1914. The first rifles were converted Mauser and Sauer-Mauser rifles that were probably converted by Adolph, who was his frequent collaborator. Beginning in 1914, Newton made an agreement with Mauser to import rifles directly. He only received one order before the beginning of World War I, which effectively ended the partnership.

This was when Newton entered the firearms manufacturing business. He worked with a renowned gunsmith and barrel maker of the era, Harry Pope. The Model 1916 was the first to roll off the line in Buffalo, NY. However, due to the war and other pressures, the company only lasted a scant 16 months, manufacturing 2,400 rifles before going into receivership for 98 days. After a couple of steps, the company then became Newton Arms Corporation, which also lasted about 16 months, then was sued into bankruptcy by Newton.

Newton was never a terribly successful businessman. He was, however, a successful engineer whose work prefigured a number of commercially produced cartridges. While many of these eventually became obsolete, Newton was a pioneer in the world of rimless centerfire cartridges, which were copied by a number of rounds. He left a huge footprint in the world of ammunition and stands as an example of what all wildcatters can aspire to with their handiwork.