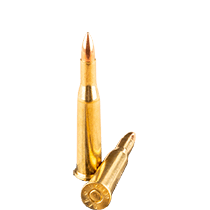 Live Inventory
Introduced as the Savage .22 Hi-Power, 5.6x52 Rimmed ammo had a brief period of popularity near the beginning of the 20th century, as it was marketed as a deer and varmint cartridge. Although it did not maintain popularity in America, it remains popular in Europe today. Learn More

Also known as the .22 Savage High Power and the .22 Imp, the 5.6x52mmR was developed by Charles Newton in 1912. Savage Arms produced the cartridge and chambered their popular Model 99 lever action rifle for it. The cartridge that Newton designed was accurate, and was based on the .25-35 Winchester case, but capped with a 0.227 caliber bullet. It was initially popular among hunters around the world for its accuracy, and soon hunters were using it to harvest game animals of all kinds – including deer and safari animals like tigers. Hunters were asking too much of the cartridge, however, and many were seriously injured by the animals they had only wounded with the 5.6x52mmR. These stories damaged the reputation of the .22 Savage High Power, and so the popularity of the cartridge fell dramatically.

The cartridge itself is designed well and performs with excellence as a high-velocity option for taking varmint and small game. Muzzle velocity for some loadings is nearly 3,000 feet per second, and muzzle energy approaches 1,900 foot pounds. Today this cartridge is mostly seen chambered for European Drilling rifles, and in that community of hunters it remains moderately popular. Sellier & Bellot and Norma, manufacturers from Europe, still make .22 Savage High Power ammunition. The Norma ammo comes with a soft point bullet weighing 71 grains that leaves the muzzle travelling 2,600 feet per second and the muzzle energy slightly more than 1,200 foot pounds.

The 5.6x52R is not the most popular hunting cartridge in the U.S., although the performance is similar to the .222 Remington or the .22-250. Hunters asked the cartridge to perform beyond its capabilities, where it failed and then fell from the good graces of the hunting community. Without the support from hunters, and a rifle chambered for the cartridge manufactured by only one major American company, the .22 Savage High Power had a life span all too brief.